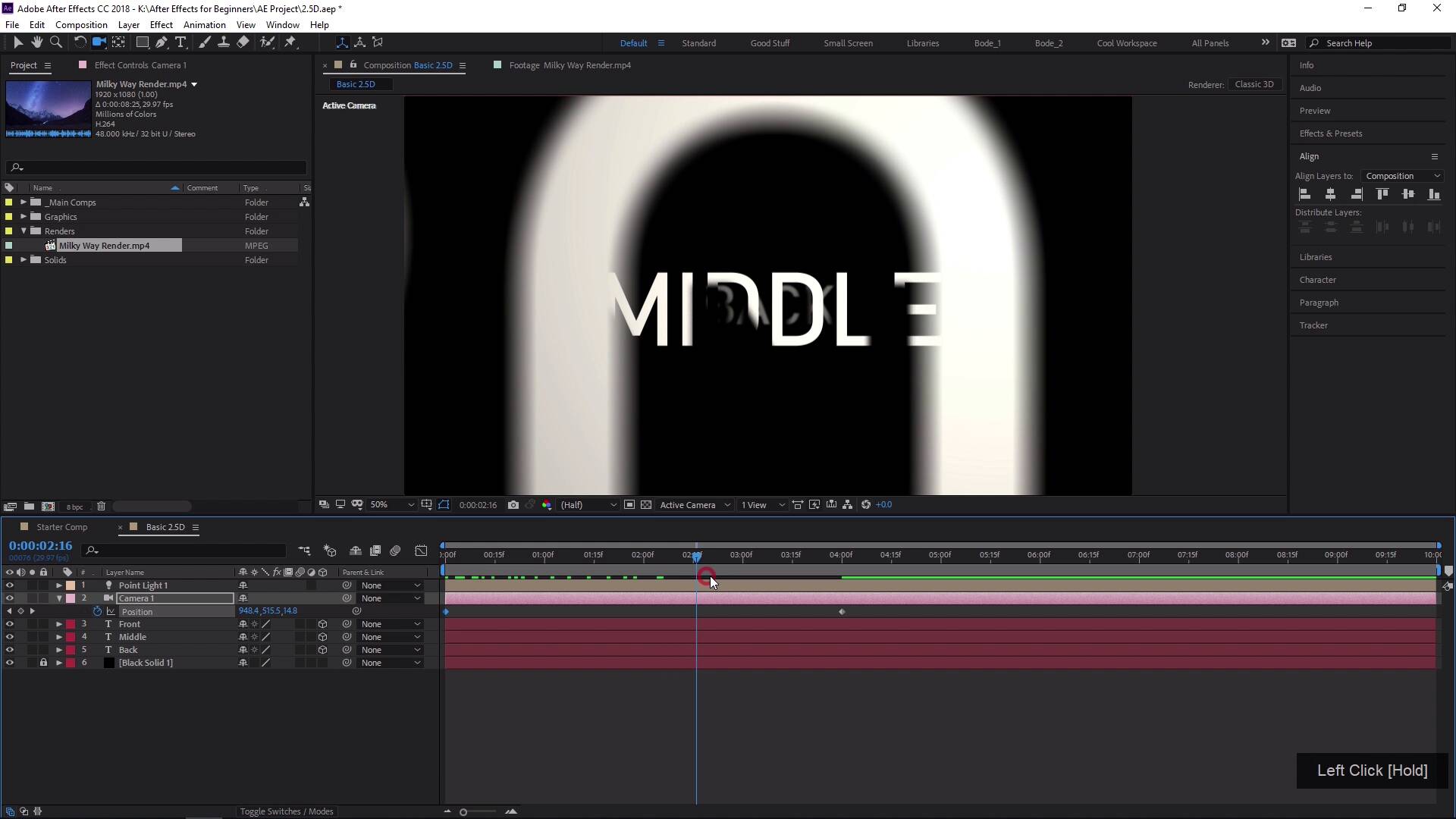 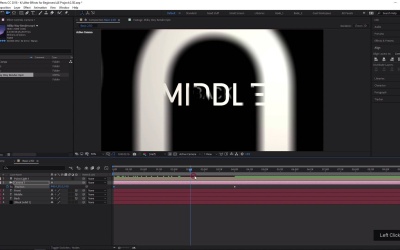 Now that you have set up your 2.5D comp, let’s make it look really cool with depth-of-field and camera animation!

In this lesson, I'm gonna pick up right where it left off in the last lesson, talking about 2.5D, what I wanna show you now is how to enable depth of field on this camera, and do a basic camera animation, So let's jump back to the camera tool by pressing C, and I'm going to orbit this to kind of orient it right here, with the camera selected, I'm gonna press AA on the keyboard. Now this is the one time that using the middle mouse button does not work to grab the hand tool for repositioning your composition, and in this case, you have to use the Spacebar, pressing and holding the Spacebar will bring up the hand tool. To give this an extra 3D punch, let's turn on depth of field here under the camera options, now at the default values its not going to look like much, but let's kick up the aperture to a value of 50, and let's turn the blur level up to 200. There's lots of other options to explore there, but let's leave it like that for now. Now let's come to the cameras position and press P, and then let's throw a key frame down, and we'll come to four seconds here, and then we'll modify the Camera in some way. We can use camera tool to do this, so I may just push the Track camera tool in, you can hold shift to get a bigger movement there or you can can use the position, values here to move it, but you may find when you do that things are looking a little bit weird. And that's because there may be an option on the camera, that we need to disable, sometimes it works when it's done, in this particular case, I'm gonna turn in off. So, right click on the camera, come up to Transform, at the bottom here, go into Auto-Orient, and this is a feature that helps you to make sure the camera is looking where you want to look. Right now it's set to orient towards a point of interest, I wanna turn this off, and when you do things will probably shift around a little bit but you can use your camera tool and get them back to where you want. All right, let's see what we have here, I'll just reposition this right about here, bring the camera back a little bit, so with depth of field enabled, and this very basic animation from here, to here, what you're seeing is a really cool 3D effect with basically just flat planes. Watch as I play this what happens to the depth of field, just like on a real camera, if you don't change the focus and you move where objects are relative to the camera, they will go in and out of focus. They will not be in the one plane where the focus is, so as this front layer comes towards the camera, or it's actually the camera it's moving through the front layer, it goes out of focus. It's no longer in that depth of field, or it's further out of that depth of field, and we get this really nice out of focus effect. We get the same thing happening, only in reverse to the middle layer If you put this at 100%, and when you do, if you have the full resolution set right here, your playback will probably be a little bit slower. But at 100% in full resolution, you can see that the middle layer goes from being out of focus or out of that depth of field, and it slowly gets sharper and sharper until it bang on in focus and super duper sharp. Just gonna turn the shadows down a little bit cuz they're a little obnoxious, make then a little softer, But you can see with a little bit of experimentation and placing of objects, you can come up with some really, really cool animations in this 3D environment, using objects that don't have any dimension. If you take these objects and you turn them sideways, if I take this right here and I bring up the rotation, and I rotate it on the y, eventually, this layer will completely disappear. You can see for a second there, from the camera's perspective, this layer is gone, but even with that we can make some really cool looking stuff. So that's basically how 2.5D works in After Effects, there's lots of other things that you can explore and do, you don't always need to use a light I just wanted to show you that because it looks pretty cool. You don't always need to use depth of field to make this work, then there's other ways you can get a 2.5D effect without actually using an After Effects camera. All right we're gonna leave it there for now, because it's time to move on to the next lesson, where you're gonna learn about motion tracking.