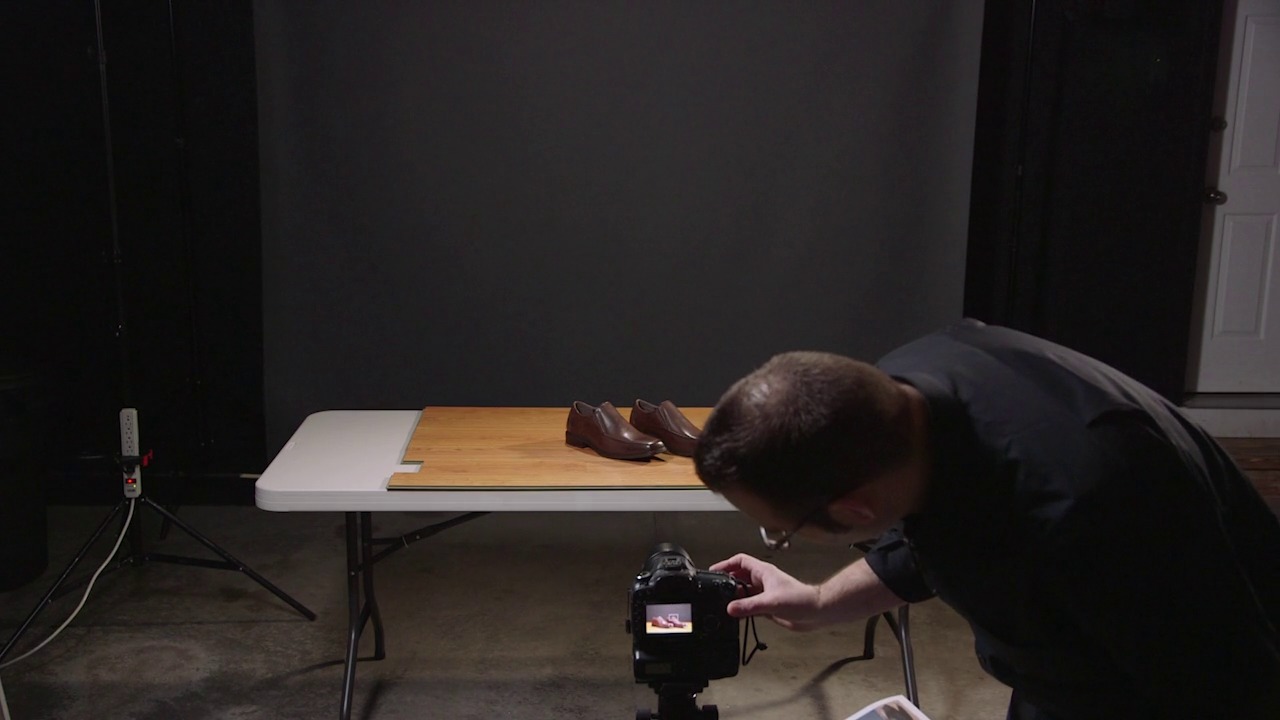 In this video you will see how to approach setting up the shoes to match the reference illustration.

In this lesson, I'm going to continue working on this shot. I'm going to set up my shoes, set up the camera, and try and get things as closely matched as I can to the composition in the illustration. I'm gonna to take out my shoes and get these set up. These look like they're in pretty good shape I don't see any marks on here that I have to try and manage and look really nice. All right, I think from the illustration, these guys have to be somewhere like this. Looks like this shoe is kind of in front of this guy here. So they're probably actually pretty close to being on the same. Plane horizontally, here. But I can't really tell until I look through the lens of my camera. So, let me get that set up. All right. So I'm gonna try and set my camera up, so that it's pretty much in a straight shot. Actually, I think I'm gonna move these guys over here, just a little bit. So they are just a little bit more centered on this wood. Something like that, it's pretty close. Then I'm gonna get my camera kind centered in on the shoes, as best I can. Turn this guy on. Like I mentioned before, this is my Canon 7D and the lens that I have on here is a Tameron 28 To 75 and I think that's gonna give me the range that I need to get this composition here. Actually looks pretty close right there. I think I'm at 75 millimeters here. And, if anything, I could probably pull back just a hair so that I have a little bit of wiggle room when it comes to cropping this image In. But something like that looks really close. I'm gonna take a quick test shot here. I'm gonna set this at two second delay because I'm using a one-third of a second shutter speed. That looks pretty close. What I'm kind of looking at is the position of the shoes, the relative size of the shoes in the frame. I'm looking at where the horizon or the basically end of these laminate flooring pieces here, meets the shoe, which is somewhere in this neighborhood here between the bottom or the top of the heel and this kind of one-third area up above the back of the heel there. And I think that's pretty close. If anything, I think maybe they can go a little bit more like this. What I'm not seeing, though, is the effect of any of the strobe lighting because I don't have anything set up. Let me take one more shot here. And again, I'm at two second delay here because I'm using a shutter speed of one third of a second. Actually I might have been better off where I was before. Because what I want to try and get is the size of the shoe kind of horizontally right. If it's too far like this the shoe's going to look really long. If I tip it back this way it's going to start to narrow just like People look fatter this way. But if you turn this way, you look a little bit better. So the same thing I'm trying to replicate here, the position in the relative size of the shoe, by its rotation in relationship to the camera. So maybe split the difference there a little bit Something like that. Let's try that. [SOUND] The settings that I'm using right now are ISO 100, F2.8, and one-third of a second shutter speed. Now, that actually may be a little bit bright. If I look at the meter, the meter actually says it's one third of a stop overexposed. It says that these settings, one fourth of a second, would actually be better. Let me check that out. And while it's taking the shot, I want to turn on my light meter, here. And I want to set this up to ambient mode. And it's already set at ISO 100, because that's what I usually shoot at here in the studio. And let's see if one quarter of a second is going to give me F2.8. It actually says F3.6. So, if I click up 2 times, the light meter is telling me 1/8th of a second. So let me dial that in. And again light meter is using incident metering, and the camera's using reflective metering. But you can see what's going on with the shadows we're getting a much more richer tone, the highlights are more controlled, and to me that looks a little bit better, even though on the camera, the camera thinks that this is too dark. But this is all completely useless because we're not seeing the shot how we want to see it. We're seeing right now with the video lighting which is set up to make me look good, and not set up to make the shoes look good. And so what we need to do is set up some of our lighting instruments and start to get those dialed in. In the next lesson I'm going to get some lighting set up here in position, I'm gonna take some meter readings and you're gonna see how all that comes together into building the shot. So check that out coming up next.