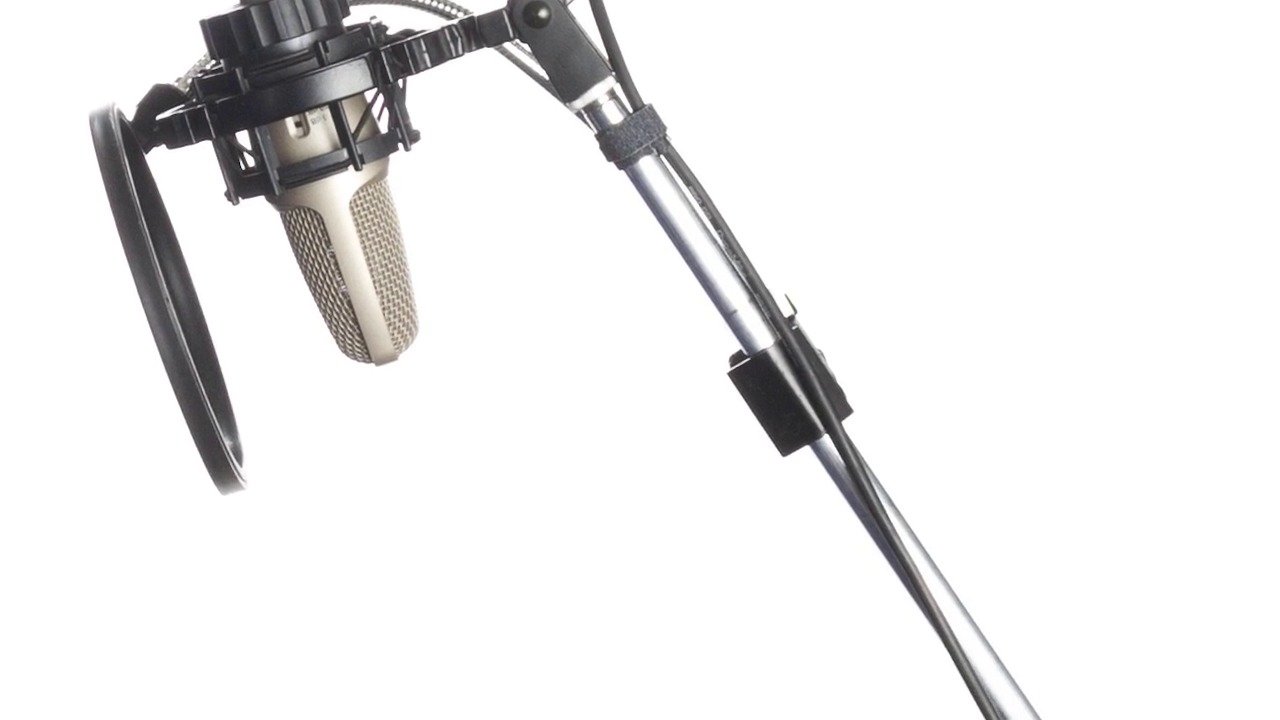 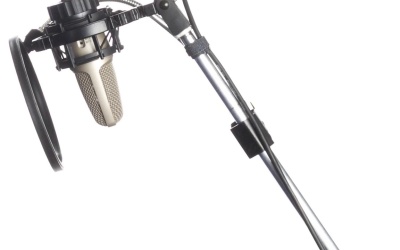 In this lesson you will learn exactly how to set up the microphone to reduce plosives and still get a great signal-to-noise ratio.

In this lesson, you will learn exactly how to set up the microphone to reduce plosives, and get a great signal to noise ratio. For recording the voice, I like to set up the microphone above my head so that I can look down slightly at a script. If this is uncomfortable for you, you could position the microphone just below the mouth so that you can see over top of it. You would think that you would wanna point the microphone directly at the mouth, but it can work better to angle it above or below the mouth. Angling the mic like this further helps to protect against air bursts and helps to reduce mouth clicks and other mouth noises. But you'll wanna experiment with this technique to see what works best for you. You want the microphone about eight inches away from your mouth. If you get in closer, proximity effect will start to become apparent. Positioning the microphone further away will result in more of the room sound being captured. Microphones with a super tight pickup pattern, like shotguns, can be placed a little bit further back. You want the pop filter a few inches from the microphone in order for it to work properly. If it's too close, the effectiveness of the filter will be reduced and you may still have air bursts. You want the rest of the pop filter hardware to be out of the way, so that it isn't interfering with the sight line to the script. The mic cable can be draped over the microphone stand to get it out of the way. Technically, the microphone cable can transmit vibrations to the microphone because it's connected directly to it. Touching the microphone cable to the mic stand increases the risk of vibrations from the stand being transmitted to the cable and then to the microphone. What I like to do is gently drape the microphone and not wrap it around the mic stand. When it's gently draped, it's only touching the microphone stand in a few very small spots, so the vibration risk is reduced. You also don't want to position the cable in a spot where you are standing on top of it or tripping over it. I also like to put a little strain relief when I plug the cable into my interface. I do this by creating a little slack and then have the cable come into the interface from a nice gentle arc. Cables can be damaged if you bend the cable very severely. XLR cables are quite flexible, but I like to be extra safe. This also protects the input of the interface from being damaged if the cable gets snagged or pulled. This kind of force can damage the solder joints on the XLR connector which will need to be repaired. Before you plug in your microphone cable into your interface, make sure the gain is down and your speakers are off so that you don't cause a feedback loop. Now that your microphone is set up properly, you are ready to move on to setting levels, which is coming up next.