Matte and faded photo effects reduce the contrast in your image, instantly making a photo feel a bit nostalgic and understated. It's a popular look with a lot of variety and style options.

Fade an image when you want to use it as the background for a website, for example. Or, apply a bit of fade when you want the image to appear classic and timeless. Thanks to Photoshop actions, it only takes a single click to apply this type of effect.

All of the Photoshop fade effects I'm sharing in this tutorial are available as a part of a subscription to Elements, Envato's all-you-can-download service for creatives, with Photoshop actions to stock photos, video projects, and a ton more.

Let's look at ten of my favorite Photoshop fade effects from Elements:

If you only have time to try out a single fade image effect pack in this tutorial, make it the ones in this package. With 17 different creative fade effects for Photoshop, there's enough variety here that this action set is a one-stop shop for fades.

The Chill Series from FilterGrade brings a different style to the fade effect thanks to its inclusion of color tinting, lens flares, and more. You can even use this package to add noise and grain to images for a grittier look, really simulating a pseudo-analog style.

Not only does this package add fade to your images, but it also creates a duotone (two color overlay) effect at the same time. Try these out for a totally stylized look on your images while also fading them. 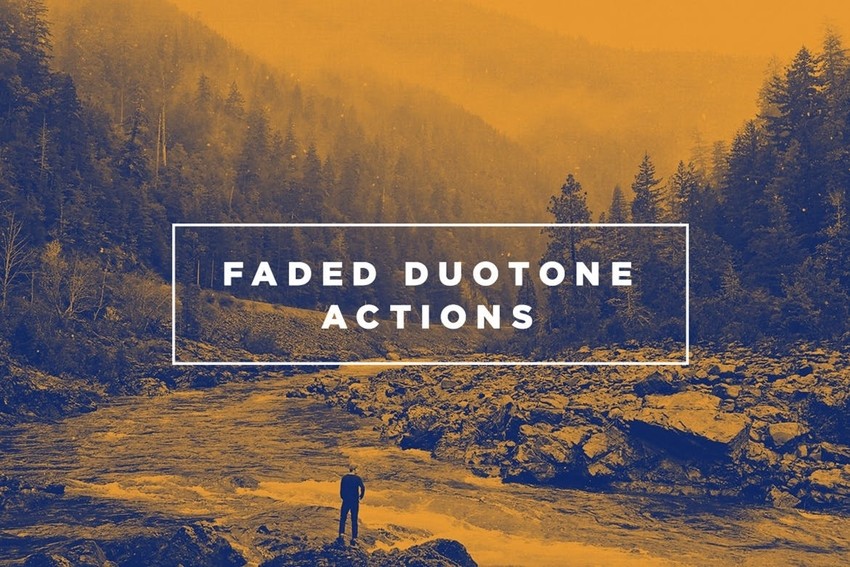 The Faded Films package is a rich mix of film styles and retro effects. The film effect includes fading and reduction of contrast, but also influenced by the color tweaks that you see in classic film styles. Try these out for a true analog simulation.

Take your Photoshop image fades to the next level with this package. Light leaks, image fades, and so much more are all included in this package to really take your image library back in time.

Contrast, saturation, and more: this selection from Contrastly has ten different takes on applying a fade or vintage to your timeless imagery. I also love that this package contains a "play all" setting so that you can sample all of the actions at one time and simply choose from your favorite results.

Ideal for low saturation or black and white images, the Ash Action is a one click specialty to add texture and reduce the contrast of an image.

Caramel action brings a bit of warmth and smoothness to an image while also applying a fade to it. Try this out for a warming effect while also softening the tones of your imagery.

There are several other film selections in this round-up, but this pack of actions really acknowledges its imperfections! Not only does it fade your images, but it also applies color and lighting overlays that are reminiscent of poorly developed film.

Here's another take on the vintage and faded effect, with some of the most classic films in mind. Fuji, Kodak, Agfa, and more films are recreated true-to-form thanks to this outstanding film simulation package.

There are so many directions that you can take a matte or faded image style. Check out these other tutorials to learn more about different styles you can apply to an image and how easy it can be to create your own.