A In-Depth Walkthrough of a Family Portrait Shoot

by Grace Salzer4 Sep 2012
Difficulty:BeginnerLength:ShortLanguages:
ShootingReflectorAdobe Photoshop
This post is part of a series called Environmental Portraiture: How to Go Beyond the Ordinary.
How to Use Environmental Lighting Sources for Natural Portraiture
Making Your Vacation Portraits Pop!

Instead of the usual theory articles out there on how to shoot a family portrait, this is a walk through of my own experience. It's like a highlight reel of the many 'oh why?!' moments I experienced as well as the one and only single moment of success.

I'm hoping you'll learn from my mistakes and glean some wisdom in preparation for your own family portrait shoot. Even if you're not on the beach, in a storm, with two wild kids at 8:30 in the morning! Hopefully you'll gain something.

First things first. Let’s decide where to have this shoot. With this particular session my clients were visiting Oahu on holiday, but had lived there a few years before. They had outlined their preferred shoot locations when we originally communicated.

Their choices were Lanikai beach or Castle’s beach. So, ooh. What to do. Beach or beach? I often have this dilemma living here. I decided on Castle’s as I’d never shot there before. It’s a stunning section of the beach as it encompasses both ocean and mountains in a sort of 360 panoramic view.

As in many cases, the time of day I get to shoot depends largely on my client’s schedules. For this shoot we were able to schedule early Saturday morning. This was exciting. Although still potentially bright and sunny, not overpowering and completely blown out. However, there were several ominous clouds on the horizon, literally.

Early morning on a Saturday meant for fewer people except maybe some quiet dog walkers. With family portraits it’s nice, to pretend at least, that the family is alone on the beach as if it were their own private oasis. So, the fewer people the better.

I showed up to this shoot (like I normally do) with my camera, flash and extra lens. That is it. If I’d have had an assistant I would have brought my reflector. Being by myself however, I could have used a white sheet on the sand to get a basic reflector effect. In the end though, the equipment I had was really quite good enough especially considering how quickly I was moving around chasing the family. 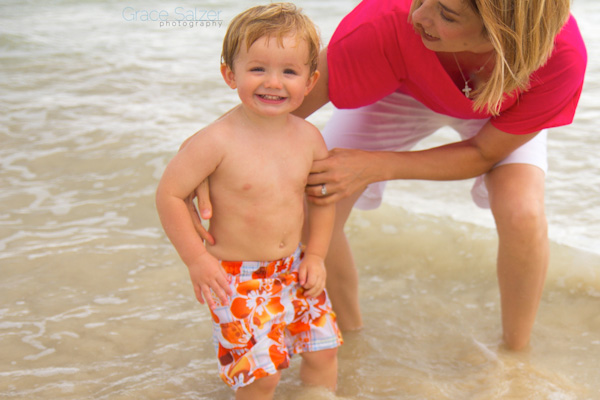 4. Setting Up the Shot

It’s a great thing (and somewhat obvious for success) to arrive early to a shoot to scope out where you’d like to focus your photography. Luckily for me there was a giant piece of driftwood perched right there on the shore. It was perfect for the family to sit on and pose.

The night before I visited the site and noticed there were some rustic rocks further along the beach where the sand ends. They would be excellent in order to add some (often much needed) variety to these beach photos. 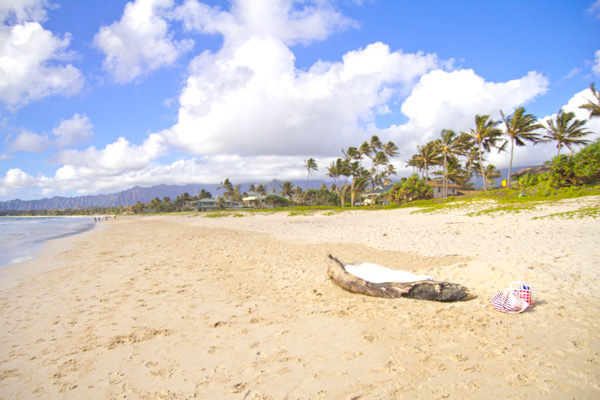 When my clients arrived I quickly realized that my dreams of a beautiful, quiet, composed shoot were completely unrealistic. Their boys were in no mood to sit still and smile for the camera! Great. With the rug swept from underneath me I felt at a loss for what to do next.

In the end, I just followed them around while they frolicked in the ocean, ran on the sand and interacted with their parents in more of a photojournalistic style of shooting. Next time, I shall seriously consider a backup plan! Either that or have Elmo on hand to dance behind me while I pose the family. Oh and some kind of strong alcoholic beverage for myself to sip on when needed (or throughout the entire shoot, whichever). 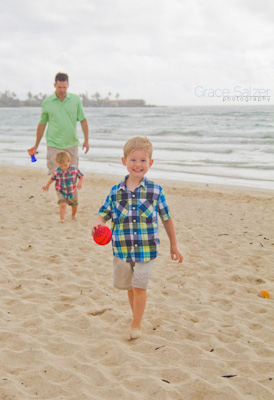 Although I had lost all sense of form for this shoot, I was able to recoup some brain function and arrange the family at least a tiny bit. Really though, only as much as the kids would allow.

I asked if the Dad would throw the youngest boy above his head a few times. I had them walk away from me along the shoreline (with the boys darting back and forth of course!), and had them split up so that each parent had a child for a while and then vice versa.

Then I just shot the kids by themselves. The basic/simple shots really. Sometimes just their happy smiles, with a backdrop made the photos great. 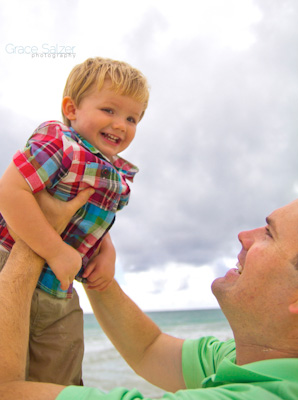 Even though I was completely caught off guard with the way the shoot needed to go, having a less posed shoot allowed me more creativity which was so nice! I certainly miss that with a lot of these portrait shoots.

I was able to get into my element a bit. While the family played together I was completely in the background so I could play with wide, landscape shots. I particularly enjoy placing people in vastly composed shots of the sky, ocean, and mountains, and I was able to do just that. 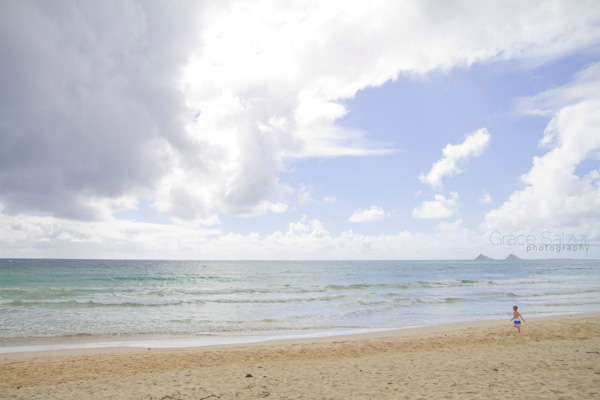 Candid shots are lovely, but clients do expect at least one posed group shot to come out of their time. One way I managed this was towards the end of our session when the kids had run (almost) all their energy out. They were a lot more pliable to my requests, which was just wonderful! So much so I got three group shots. I know! Three?! *Grace faints* Not that they necessarily smiled though, but still, mission accomplished.

During the shoot we got rained on twice. TWICE! It is always disheartening when that happens because I never know how long it will last. You kind of loiter about under the trees making hopeful conversation always accompanied by awkward silences.

But, one must always be creative, so I took some shots while we waited. She who wastes not, wants not, right? My clients were very accommodating and I was able to capture a couple sweet encounters while we waited for the storm to pass. 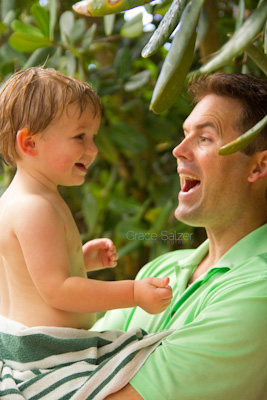 I have never been all that great at the post-production portion of photography. I would really rather avoid it if at all possible. But it is something I aim to master because I know it will do wonders for me! Particularly for a shoot like this one. Oh goodness gracious.

Due to the dark ominous clouds and bright morning light, the photos came out all over the place. They really looked rough. I honestly thought I had my settings where they should be to avoid any issues. It's times like this when I feel like a complete amateur and wonder why I take photos to begin with. But ultimately, thank the heavens above for post editing suites to save a gal like me! 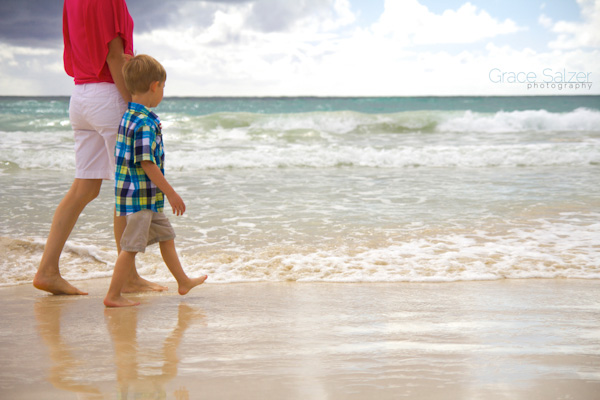 I suppose the moral of this story here is to never shoot outside and to exclude all children from your shoots. Oh, I kid. It’s not all bad. But I do hope you take away from my experience the importance of a back-up plan. Having a variety of directions up your sleeve in which the shoot could go is crucial.

It can be hard to assume a style when you’ve never met the family before, which is exactly the mistake I made. Also, when it rains just try to run with it! Don’t let things like the weather determine the success of your shoot. Trying to become proficient whenever a shower, rainstorm or wind front comes my way is a personal goal from here on out. I am determined to not be phased! 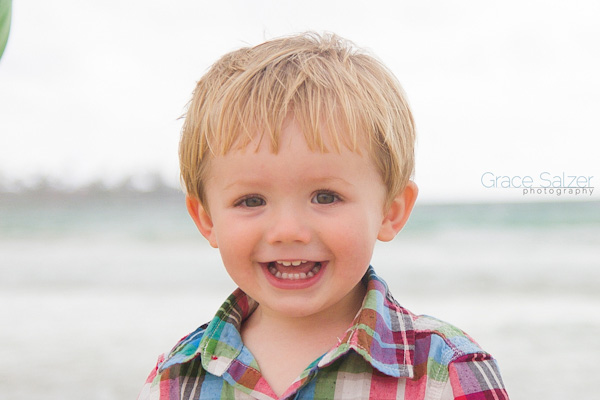 Grace Salzer
A stay at home mum originally from the south of England now residing (like a martyr) in the Hawaiian Islands, where the breezes are cool & palm trees sway. Due to vast amounts of sun exposure she now has more freckles than any one human should attain in their lifetime. Her goal in writing for Phototuts is to begin saving to reverse the signs of premature aging. Any form of help one might get from reading her articles is basically, a complete miracle. Angels will probably sing.
Weekly email summary