A Step-By-Step Guide to Shooting Your First Product Photograph

Today, we'll be taking a walkthrough simple product shoot. This type of photography is in some demand on stock photography sites and is perfect for showcasing an item in order to sell it on Ebay or Etsy. As reported our recent still life article, once you've mastered this type of photography, it can be personally rewarding and pay very well.

The most basic form of product photography is an object in front of a white or solid colored seamless background. This is often utilized in retail catalogs when they want to display their products without distractions. These are sometimes called cutouts because it’s easy to cut out and insert into another image.

Many photographers can successfully shoot product photographs at home with little trouble. Ideally, you would have at least three or four lights to work with, but it is possible to do it with just two. We’ll explore that in this tutorial.

For this tutorial, I use only a pair of flashes. While I could, as I describe below, use lamps or other light sources, I prefer my flashes because they are easy to reposition and are fairly powerful.

If you don’t have flashes or speedlights, incandescent lightbulbs, florescent bulbs or tubes, whatever you have handy, are all suitable. If possible, purchase a number of same-brand, same wattage bulbs. The bulbs’ hues can vary from brand to brand, and while your eyes may not detect the slight difference, your camera can. Lamps, especially the type with bendy arms, are great for this sort of product photography.

There is another light option: daylight. Preferably a nice, overcast day. However, daylight’s intensity can be unpredictable, depending on the weather and the time of the day. Relying on daylight isn’t always feasible, and if you’re limited to shooting in evenings when it gets dark early. This is where artificial light comes in handy - it's a consistent, steady light source that give you the confidence that the light levels will not change from one moment to the next.

Whichever light source you opt for, use multiples of the same light sources is because it can be difficult to compensate for mixed lights. For example, florescent bulbs tend to emit green- or orange-tinted light. Most incandescents cast a yellowish hue. And tungsten is orange.

While it is possible to compensate for the mixed tint in-camera or in the post-processing, it is easier, especially if you’re just starting to explore this genre of photography, to use a consistent light source because it’s one less step to futz with. Don't forget to use a manual white balance setting that's appropriate for your light source.

A 18% gray card is very handy for fine-tuning the white balance, especially important when you’re photographing something with a white background. Color casts from your lights or even the light reflecting off your object will be apparent on the white backdrop.

Some newer dSLRs have a customizable WB setting. If yours does, photograph the card and it will help you determine the proper white balance. For further details on how, check your camera’s manual.

If your camera does not have customizable WB setting, you can still use this card to determine and alter the white balance in post-processing.

Your camera doesn’t have this custom feature or you lack a 18% gray card? After you’ve set your table up, set the WB to whichever light mode you’re using, take a few photographs of the white poster paper and fine-tune the WB the best you can.

There are a number of different ways you can set up your table. You can purchase one or make your own DIY lightbox. 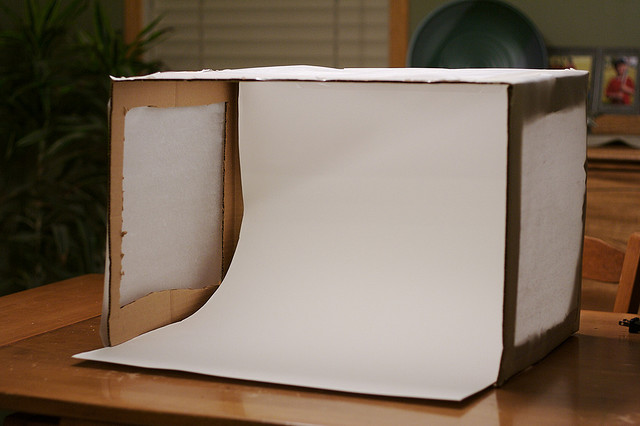 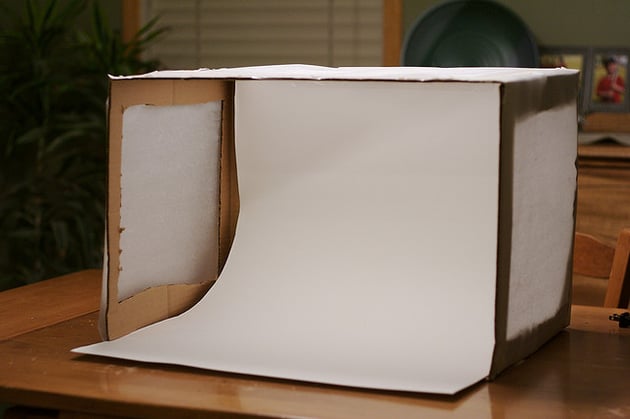 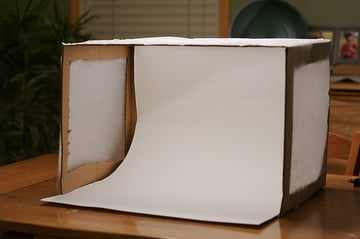 Or go the lazy route and tape your paper poster up to a wall. 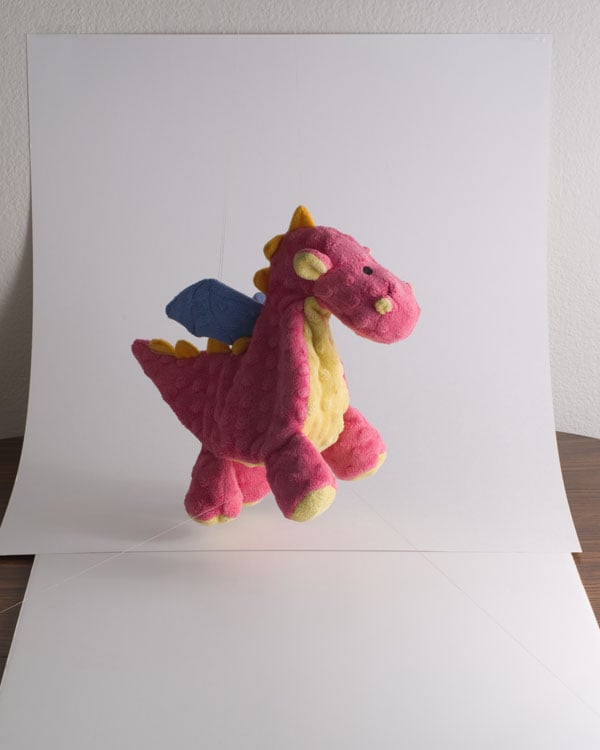 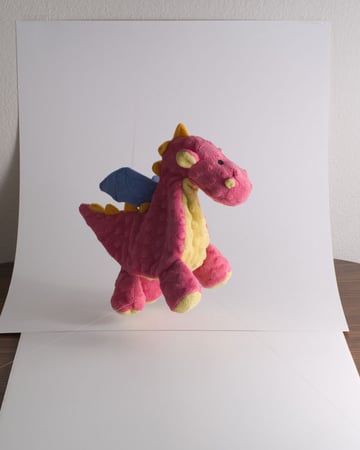 Getting the Lights Right

Even lighting is important. One of the main requirements of this type of product photography is that it’s easy to cut out the object; and in order to do so, it’s important that the outlines of the object are crisp and clear and the shadow on the backdrop is minimal.

For this tutorial, I have chosen a toy that’s not reflective (we’ll explore reflective objects another time). I suspended the toy on strings for a couple reasons. First, because of the limited number of light sources available, this will help minimize the shadow underneath it. Second, the backdrop wasn’t large enough for this object. When the toy was on the “ground,” the edge of the backdrop intersected with its feet. While that wasn’t a huge issue – it’s easily fixed in photoshop, certainly – I prefer to rely on post-processing as little as possible. The strings are more easily cloned out and it will be less destructive to the image quality to repair in the post-process stage.

With only one light placed at about three o'clock (with the dragon in center of the clock), it casts too strong of a shadow. It makes no difference how I place it; there is a crisp shadow. 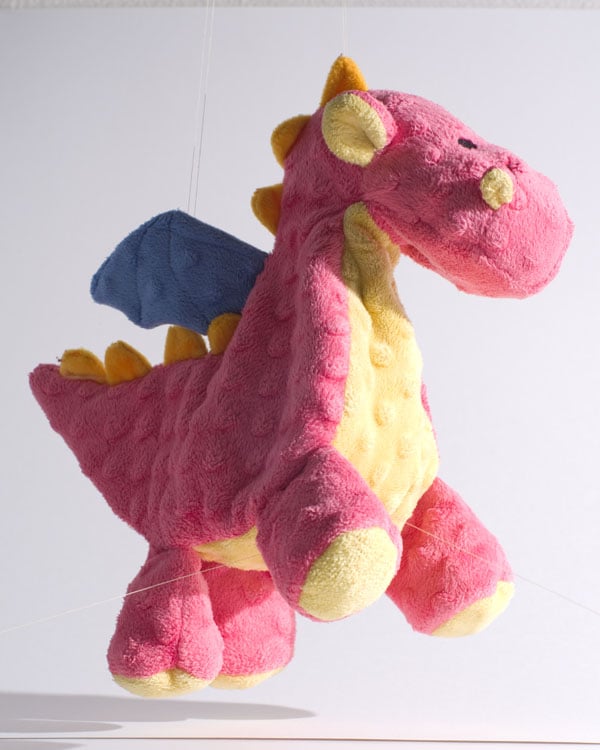 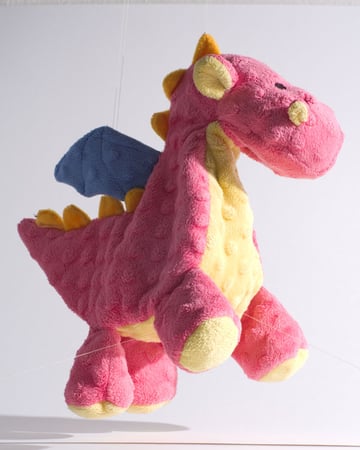 When I place an umbrella in between the flash and the toy, it helps soften the shadow. However, both the body of this toy and the left side of the backdrop are in shadow, it needs some light from the left side. 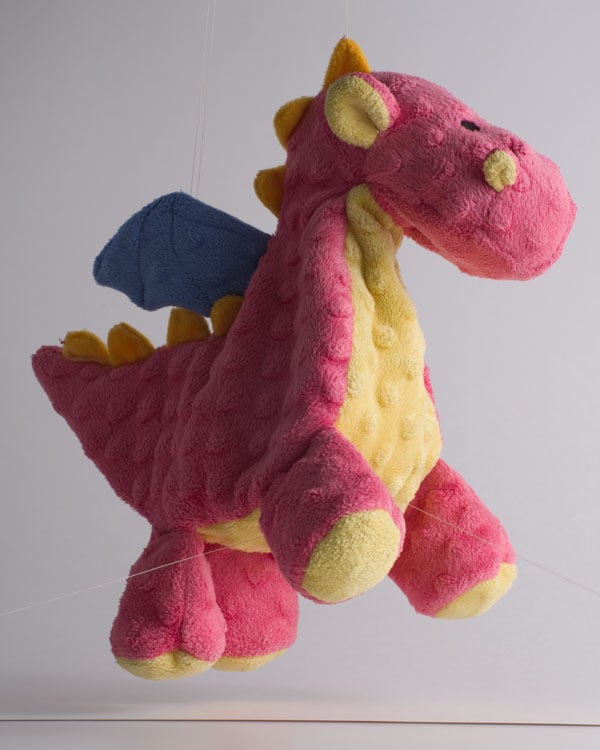 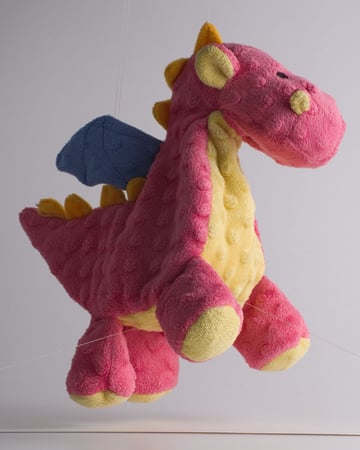 Note: If you’re using a DIY lightbox and feel that the shadow is too strong, add a layer of your translucent paper one at a time until it’s soft enough.

This is with no umbrellas to diffuse the light; the right light is still at three o'clock, the left at about eight o'clock, and now we have two harsh shadows. Unacceptable.

With umbrellas – better. Depending on your goal in this project, this might be good enough. I feel this can be further improved upon, however. 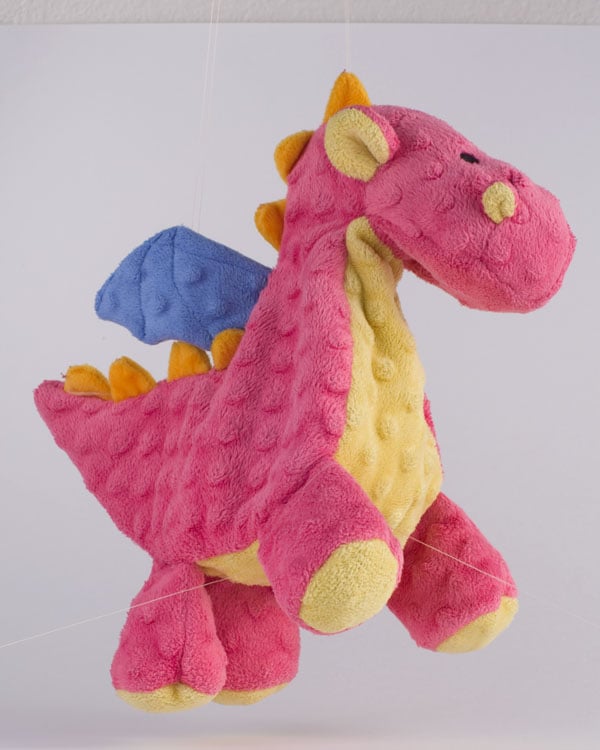 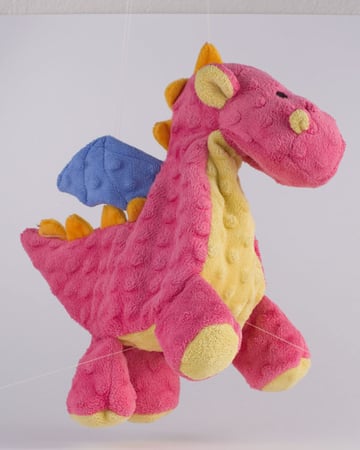 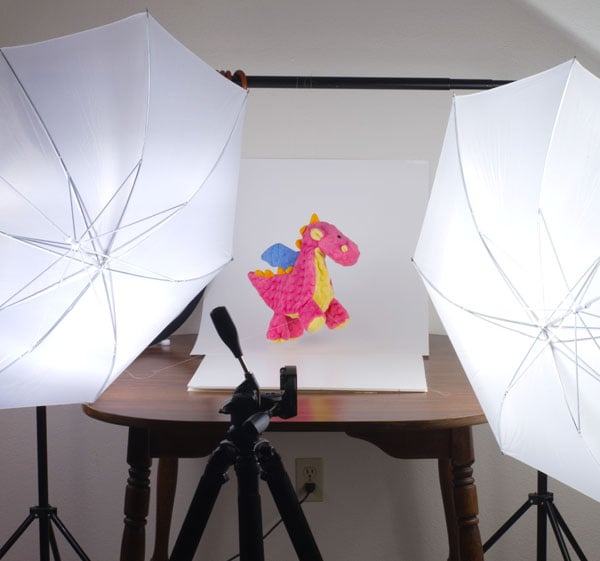 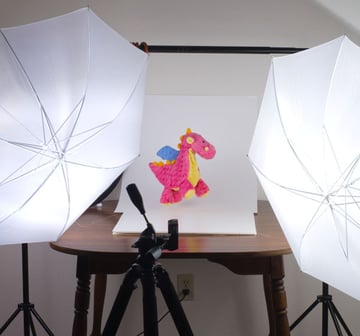 I moved the left light so it’s slightly above and left of the object. The right light has been repositioned it so it is aimed more downward, at the surface below the toy; the white surface bounces some light back up underneath the toy. I also added a small white reflector on the left just behind the toy, directly opposite the right flash; this bounces some fill light onto the rear of the toy. (Note for the DIY-ers: A white poster paper or wall can be used to similar effect.)

The lighting is now more even throughout. It's not perfect, but much better.

The shadow is nearly gone and if I so desire, I can dodge it out easily without affecting the quality too much in the post-processing stage. Having played with a few other positions (not shown) of the lights, I’ve conceded that this is the best placement for this object. If this toy was reflective, however, I’d choose a different arrangement and replace the umbrellas with sheets of translucent paper.

As noted before, multiple lights is ideal. As you can see in all of the images, the backdrop isn't stark white - this is in part due to the paper itself, and in part because I don't have a third light solely for illuminating the backdrop. It's not the end of the world if you're in the same boat, though; I've sold images that were lit by only two lights just fine.

If I had the option, I would place a third light above, with barn doors to control the light spread, aimed at the backdrop for a brighter white background. And perhaps a fourth to minimize the shadow below the toy even further. If you have access to multiple lights, I hope this description helps you find a good setup.

If you’re photographing an object with the intent of selling it to a stock company as a cutout, you may want close down your aperture in order to maintain a crisp outline of the object.

In the above example, which was shot at f4, this is unusable. This toy is already fuzzy as is and probably too difficult for a graphic designer to cut out neatly. 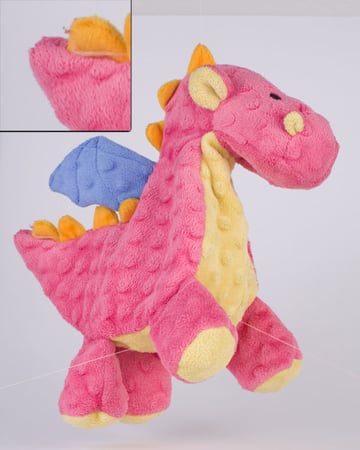 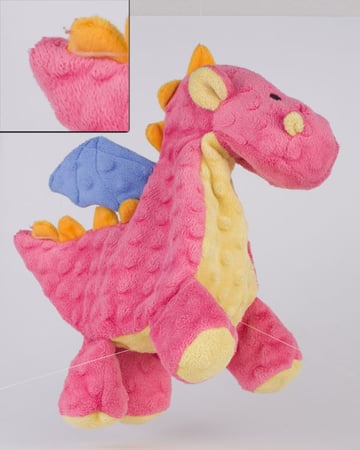 At f18, it’s much better. The edges are still soft, but that's more due to the nature of the toy itself.

This is still life; a fast shutter speed isn’t necessary. Lower it as much as you need to in order to get a good exposure, and use a remote or the self timer to avoid camera shake. Do take note that, at this aperture, the background’s inherent flaws - for example, creases in the paper backdrop - may stand out too much. If you're doing this for fun or to sell an item of yours, the DOF isn't that crucial. Choose an aperture that appeals to you the best.

Now I've chosen my final image, all I have to do is clone out the strings and give the image a slight boost to the saturation (because Pentax's dSLR cameras are set to desaturate the images in-camera, a known issue for all of the K line cameras). Voila. 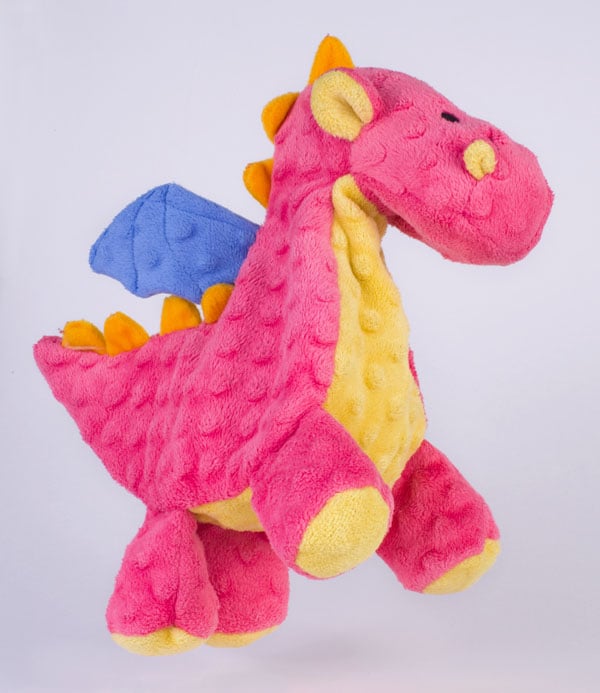 Now I have to give the toy back to my dog!

LightingSpeedlightsWhite Backdrop
Did you find this post useful?
Yes No
Would you like to provide feedback (optional)?
Cancel Submit
Want a weekly email summary?
Subscribe below and we’ll send you a weekly email summary of all new Photo & Video tutorials. Never miss out on learning about the next big thing.
Sign up

Jennifer Carrigan
Jennifer is a freelance writer and editor residing somewhere in Seattle, and she occasionally moonlights as a "lifestyle" photographer. Jennifer enjoys exploring new techniques and is, as of early 2011, teaching herself about product and commercial photography.