A Step-by-Step Look at an Outlandish Musician Shoot

Thinking up interesting and engaging ideas for promotional portrait shoots is one of my favourite things. To try to engage the viewer and to represent the subject all in one go can be a challenge, so here's a look at what I did with Brighton-based musician Stuart Warwick to get you thinking outside the box and bring fresh ideas to your promo portrait shots.

I’d been fortunate enough to see Stuart perform in London a year or so before the shoot, and as a result I was following his page on Facebook. He posted a status requesting details of photographers as he needed some new promo shots to go out with the press releases for his next release and for his online presence.

I replied and we agreed that we’d meet before a show for an hour or so, the closest of which was in Leeds, about an hour away, so I traveled over and we met for the first time at the shoot! 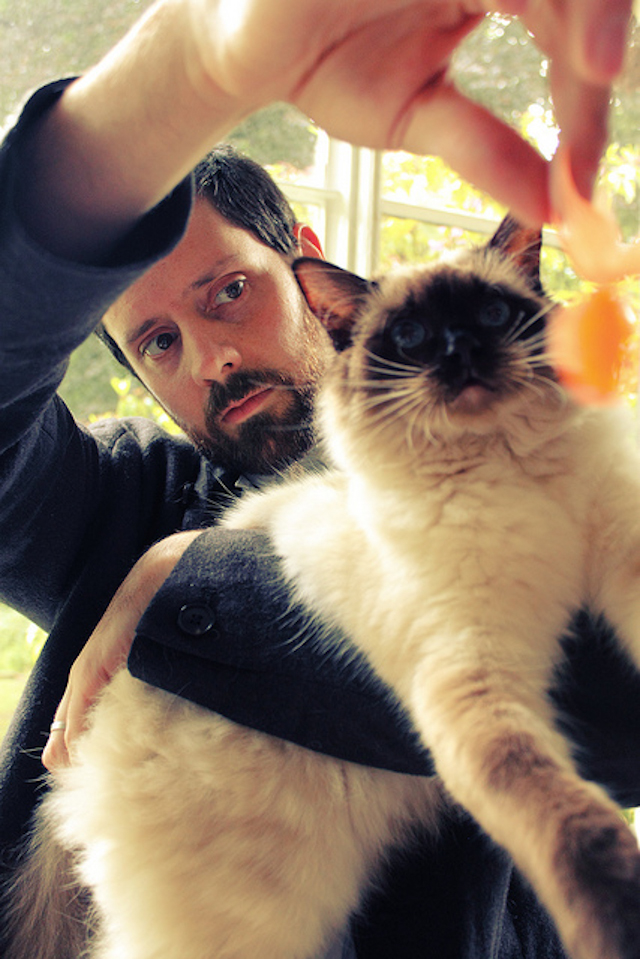 My Vision for the Shoot

To be honest, I went into this shoot without much of an idea about how the images would end up, which is probably why we ended up with such an interesting variety of shots. Stuart was staying at a friend's house for the night and he convinced me that we’d be able to get some great shots there, so I didn't really know what to expect with the location.

Having had an email conversation with Stuart, I knew he was after some unconventional images that would reflect his sense of humour, so I went prepared to be flexible and work with whatever I found at the time. 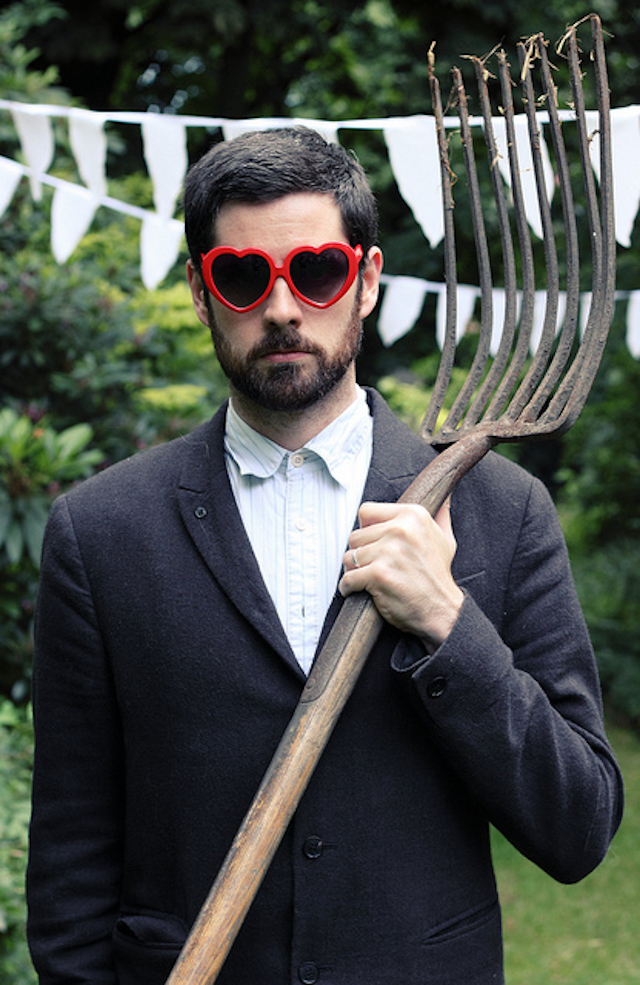 Not knowing much about the shoot, I traveled with a selection of gear to prepare myself for any eventuality. Once I got a handle on the situation, I knew I could stick with natural light, so I wasn’t in need of my flash or reflector.

In this instance, just using my DSLR and a 50mm lens kept things very simple. I had little information to prepare with. I was having to think on my feet with regards to every element of the shoot. Not having to fiddle with lighting set ups meant I was able to focus on getting the most out of Stuart to add character to the shots.

Getting my Subject Comfortable 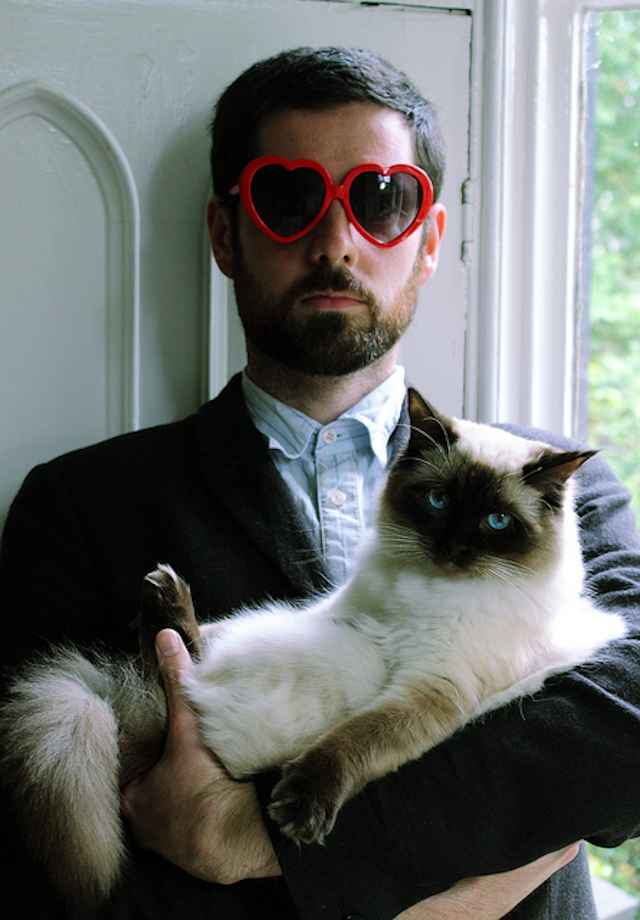 Like many musicians that I’ve worked with, Stuart wasn’t naturally inclined to pose and model as such, so I took my time in getting him relaxed before even getting the camera out by sharing musical tastes and discovering mutual friends.

The first set of shots were very straight, just Stuart in front of a wall. I never had any intention of using these shots, but it got him used to having the camera pointed at him and allowed me to work out my exposure settings. This five minute stint put us both at ease and allowed us to progress with the shoot, looking for extra elements to add and thinking about varying the locations. 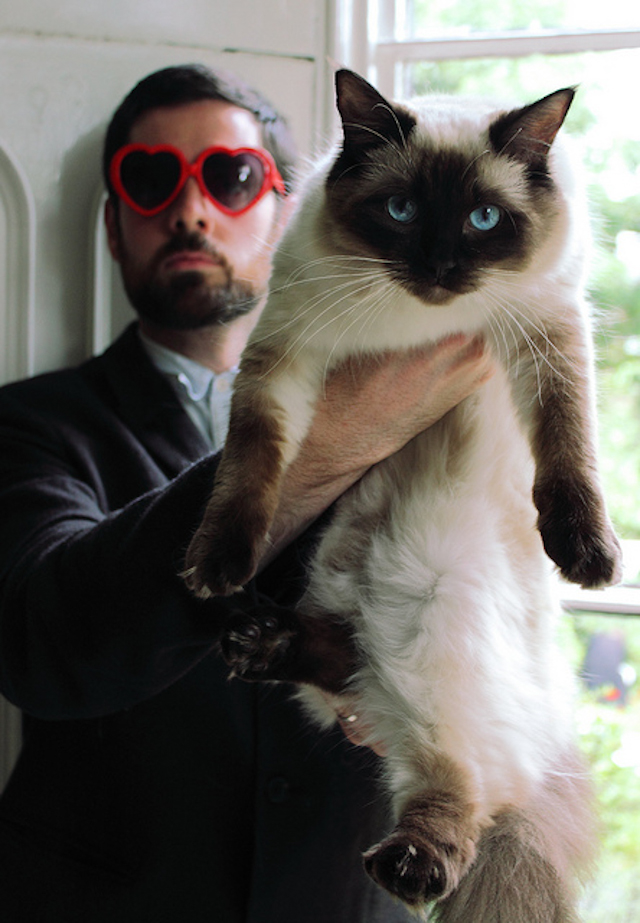 Let me just point out from the start, this was Stuart's suggestion. Once he was at ease he was willing to make all sorts of suggestions, the first of which involved him holding the cat. The first challenge was to lure the cat from under the sofa, and after a tricky moment or two, we managed to get into a position where Stuart was able to hold that cat in different poses.

We began with the cat cradled like a baby in Stuart’s arms, which worked well, but I wanted to make more of the fact that we had the cat in the shot, so I asked Stuart to tempt the cat with one of its fish toys and then present him to the camera.

This was hard work, as obviously the cat wasn’t accustomed to having his picture taken and would wriggle and flinch. My main objective was to capture the cat’s big blue eyes in focus. I had to be patient.

I selected the centre focus point and adjusted my shot, ensuring that I set the focus on the cat's face for each frame. It took us a while, but in the end, we got the shots we wanted!

Working with those Ridiculous Glasses! 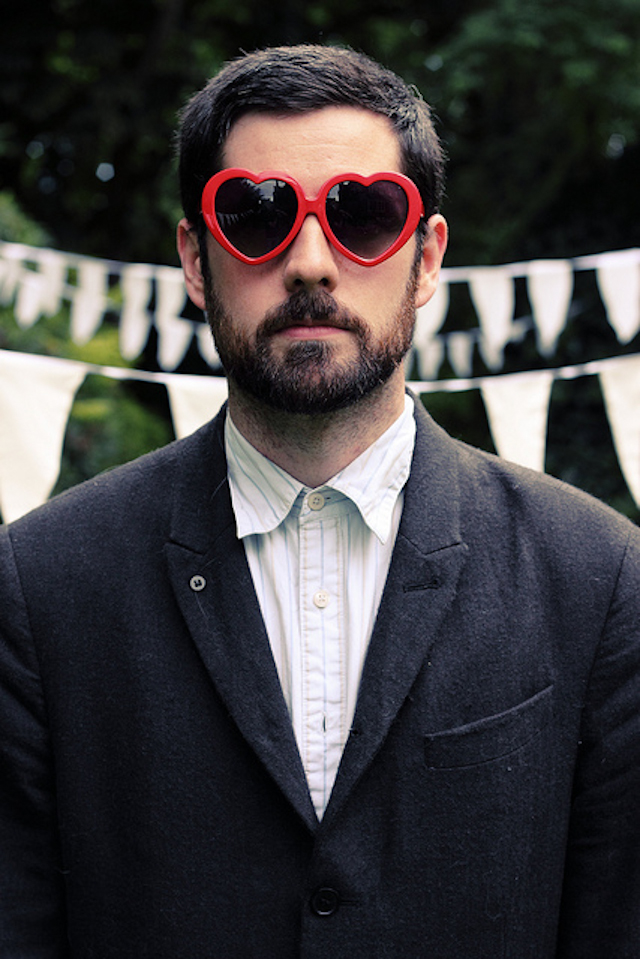 Once the cat scenario had worked out, there was nothing stopping Stuart from picking up all sorts of props, some worked, some didn’t. The glasses belonged to the child who lived at the house and as soon as Stuart put them on, I could see we were onto a winner!

Adding a single element of humour to what was otherwise a straight shot perfectly reflected his sense of humour. The obvious problem here is that on a portrait shoot, one of the only rules is to connect with the subjects eyes. Well, on this occasion I was willing to break the rules in order to allow me to capture the subject’s character.

Heading into the Garden 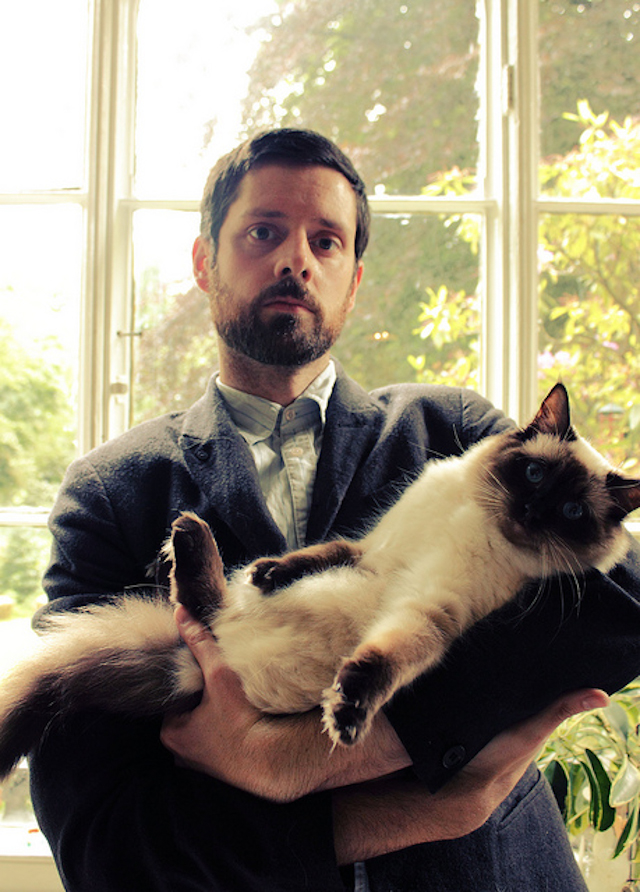 Using an interesting location can transform a shoot into something far more engaging. For the shoot with Stuart, the furthest we ventured was into the garden, but even that threw up the option of posing him in front of a variety of flower beds, which I wouldn’t have otherwise considered.

These ended up being my favourite shots of the day, in particular the image with the pitchfork. The combination of the flowers in the background, the vicious looking pitchfork, Stuart's suit and then those glasses should never really work, and you’d never plan to take a shot like that, but it makes for a very eye catching image that Stuart has gone on to use quite a bit. 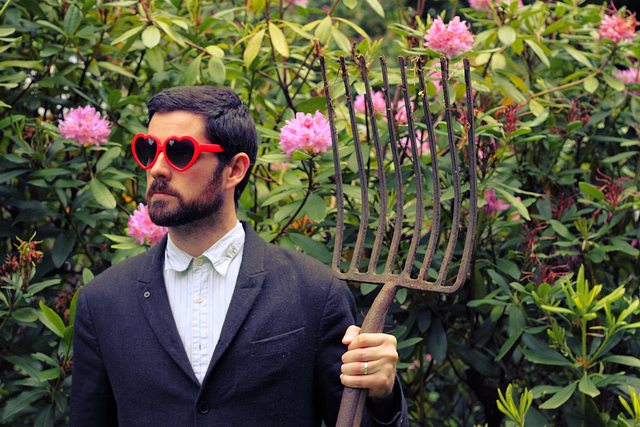 My main focus in post production was to not go over the top. Most of the images have enough going on for the viewer without having to deal with extreme edits. I used Lightroom to even out some of the lighting, particularly in some of the backlit shots.

I then ensured that specific colours in certain images came out, in particular, the reds in the shot where the poppies and glasses correlate so nicely. Some simple crops then completed the processing as I ensured there were no distracting lines framing the images. 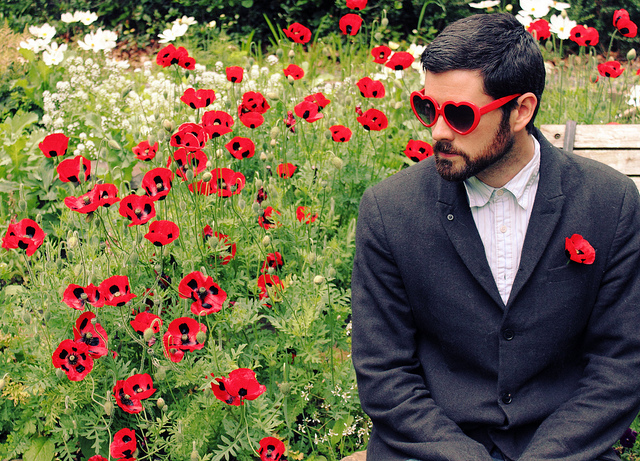 What Would I Have Done Differently? 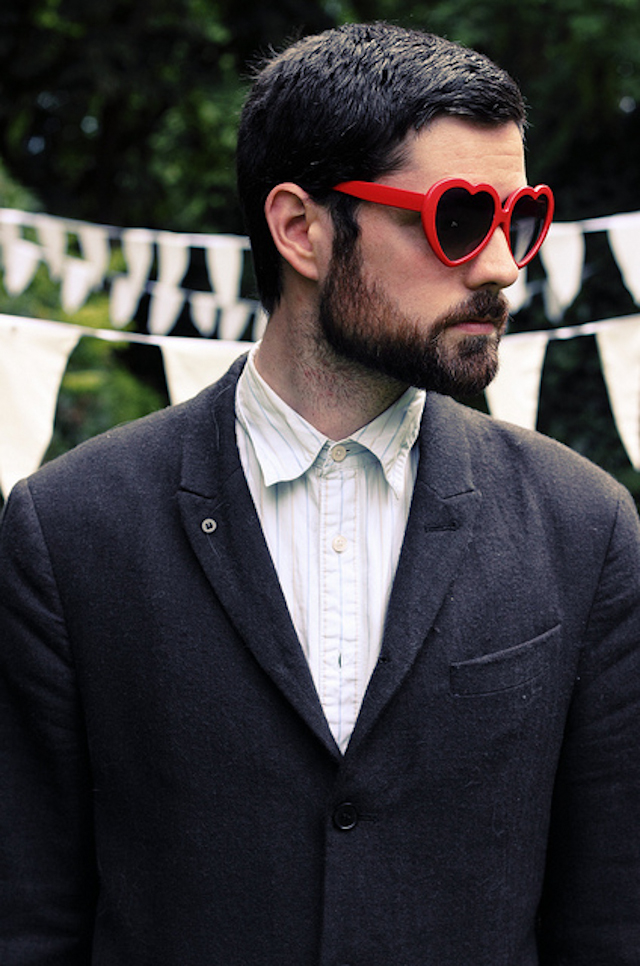 I was actually pretty pleased with the series of images that we ended up with after the shoot. Considering the spontaneous use of props, I think we were able to use them to good effect to get some engaging shots. I don’t think it was ever Stuart’s intention to get any serious shots.

If we were to do the shoot again, I’d like to do some straight shots in the garden without any props, just so I could give him the option of having them in case he needed some publicity images for a serious occasion. I’d also take some cat food, because coaxing that cat from under the sofa took up valuable shooting time!

What to Take Away from This Shoot

This was a real learning curve for me. I thought I’d gone prepared and came away with a set of shots that I could have never imagined taking. It taught me to bring an open mind and to go with the flow.

Taking the time to ease Stuart into the shoot and allow him to work with some crazy props brought the shoot to life. I took a chance on shooting backlit in front of the window, which worked out really nicely and I wasn’t afraid to move on from a location if I felt like something wasn't working.

I wanted to give Stuart a variety of shots and once I felt we’d done all we could inside, moving out to the garden proved to be a very wise move. Oh, and don’t annoy the cat, you might need it to be friendly later in the day! 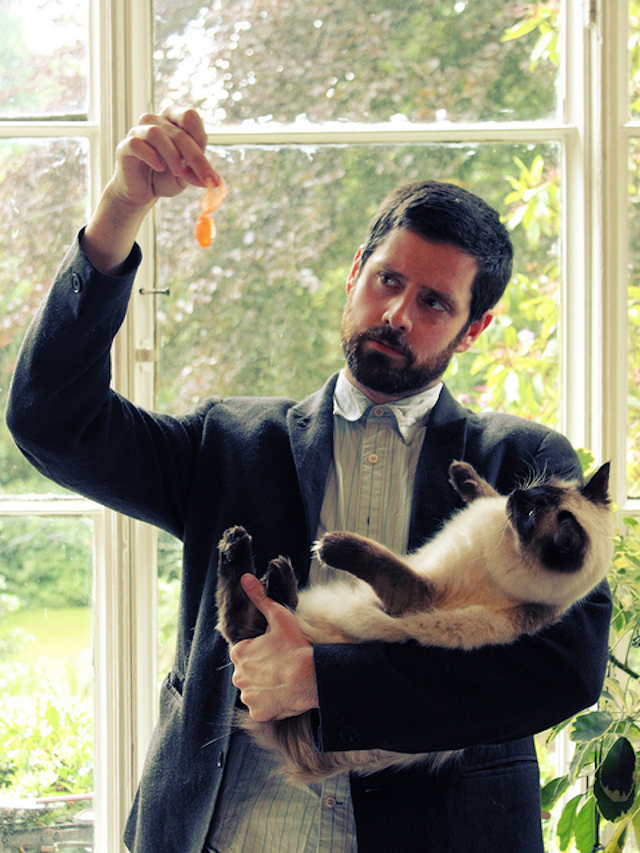