Aperture is Apple's professional photography application. It has many strengths and roles in a digital photographer's workflow including RAW file decoding, image adjustment and book design to name but a few. Today I am going to demonstrate Aperture's powerful file management options through a combination of written examples and video screencasts!

Much like Apple's consumer-level application iPhoto, Aperture can import your images directly into its Library, a "locked" folder - or package - which is by default located in the Pictures Folder on your hard drive. 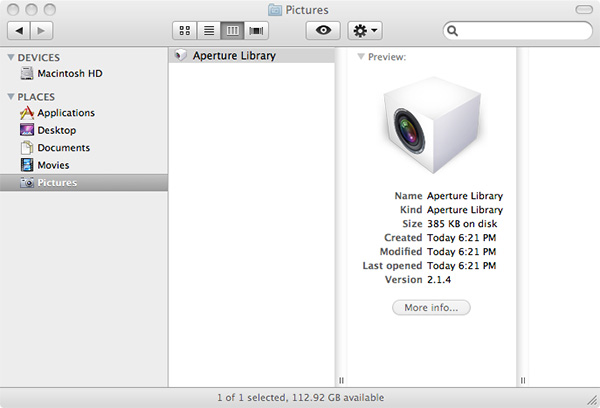 As you import more photos into the application, the larger the Aperture Library becomes on your hard drive. With desktop computers boasting hard drive capacities of 500GB to 1TB these days, this at first does not seem to be an issue. For laptop users or people with a large existing collections of photos, however, storing the images in a location other than the computer's internal hard drive is an attractive proposal.

In this tutorial I am going to show you 3 different options available to you to import your images into Aperture:

But first, lets define some of Aperture's jargon.

Aperture is sometimes referred to as a "non-destructive" editing tool; any adjustments that you make to a photo can be undone at any time. The way that Aperture can do this is by splitting the way that it works into two; the files that you import (your RAW, JPEG or TIFF files) are known as Masters and are kept in one place and all of your adjustments are known as Versions and are kept in another.

The Masters can be either stored in the Aperture Library or stored in an external hard drive of your choice. Once these files are imported, however, they are not adjusted. Aperture merely uses them in conjunction with it own reference, the Versions; they are a visual representation of a reference to the Master File added to a list of any adjustments you have may have made.

The first advantage of this way of working is that at any time, you can delete all of your adjustments to a photo and start afresh with a new Version created from the original (and untouched) Master. The second advantage is that Versions, being references of only a few kilobytes in size, take up very little room on your hard drive. This is why learning to split your Masters from the Aperture Library is a useful skill.

As with anything, though, it's good to get an understanding of the basics first.

Step 1. Importing From a Memory Card

As we see in the screen-cast, when plugging in your memory card, Aperture's default setting is "Store Files: In the Aperture Library". The Masters are copied into the Aperture Library on your computer's internal hard drive. 1GB of photographs on a memory card will be copied across as master files and will take up 1GB of your computer's hard drive.

When we choose to import the Master Files into the Aperture Library like this, they are referred to within Aperture as managed files - Aperture is "managing" them for us.

With the resolution of cameras and the capacity of their memory cards increasing every year, a photographer's library can grow at an alarming rate. It is not always cost-effective or even possible to update one's computer or internal hard drive to match. The solution to this is to look at cheap forms of external storage, and Aperture fully supports this.

Using this method, we have still imported the versions into Aperture, but the masters have been copied from the memory card and are now being stored on an external hard drive. These files are referred to as referenced files - Aperture is not storing them for us, but has taken a "reference" of where we have chosen to store them.

This is visually indicated with a small badge in the bottom right-hand corner of the thumbnail: 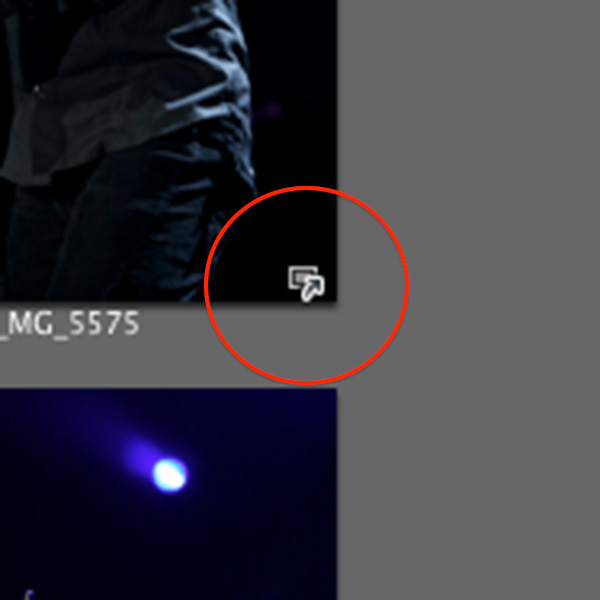 The Aperture library has not grown by much; a few megabytes rather than a few gigabytes:

It is with the use of referenced files that we can really make the most of Aperture. And that is what we are going to look at in depth next.

As we can hopefully agree by now, with your masters imported into Aperture as managed files, everything is with you all the time, but at the expense of your computer's hard drive capacity.

With your masters referenced on an external hard drive, your Aperture library is of a more manageable size, but you have to have your hard drive plugged in if you wish to adjust, print or export your photos. In other words, the masters have to be online. If a file is online, then the referenced image badge in the bottom right-hand corner of the image will remain as normal:

But, as soon as you unplug the external hard drive containing the masters (or launch Aperture without the drive attached to your computer), Aperture cannot find your masters and labels them as offline. This is visually represented with a red strike-through on the referenced image badge:

If an image is offline, then you cannot adjust, print or export. But, you can view the images, you can search them and you can apply and adjust metadata (keywords, ratings etc.)

Lets take what we have learned so far and put it in a real world context.

Example: You take your laptop to a meeting with a potential client. Whilst talking about the job the client wishes to see some examples of your other work. With a library of offline referenced images, you can quickly search your keywords with Aperture and pull up all of your best photos for them to view. You won't be able to adjust, export or print, but you can certainly show off your work when an opportunity presents itself.

But what about you photographers out there who already have a large collection of photos already stored on external hard drives? Well, adding Aperture to your workflow is easy and doesn't have to disrupt your current organisation.

Hopefully this has now opened up a few new potential techniques for you in your everyday use of Aperture. If you do decide to go down the road of referenced files, then I have a few tips for you to make sure that you steer clear of any potential missteps.

When you import files either to or from an external hard drive, Aperture acts like a database; that is to say it has a log of where these master files are in relation to the references in the Library. Because of this, we have to be very careful about renaming the drive, folders and files outside of Aperture.

As a well-known photographer once said: "With great power comes great responsibility".

We, as photographers, have to look after our photographs; hopefully they will continue to make us money in the future. This means backups, ideally onsite and offsite, but at least on two different hard drives. Here are some options available to you:

The Aperture Vault - a great place to start, but it only creates a back of the Aperture Library and its contents! That is to say, if your files are managed, everything will be duplicated in the Vault. However, if your files are referenced from another drive, Vault will not back up the masters. That is not to say that Vault is useless with referenced files. Vault will back up all of the hard work you have done in Aperture; your ratings, keywords, adjustments, organisation, in fact everything but the Master files. I recommend having a Vault even when using referenced files on an external drive.

Time Machine - similar to Vault in that it will back up everything that is on your internal hard drive, but won't back up any referenced files on an external drive. Well worth it to have an easy scheduled back up of the rest of your hard work on your Mac, the Aperture Library being part of that, but not the end of your backups yet...

Manual backup - or duplicating your drives. I use a mini-server for my referenced files in Aperture, but all of my images are also copied to separate hard drives that I then keep locked away in a fireproof safe. I also then duplicate those backups and send them to be stored at another location (nothing fancy; my parents' house). All of my images exist in three separate places. That way if everything goes wrong, I know that I have copies in other places. That might mean importing all over again, but that is certainly better than losing everything.

If you can organise your duplicate / backup hard drives' file structure in exactly the same order as your master drive, then, should a disaster occur, reconnecting the files should be as quick as possible. If the only difference between the master drive and the duplicate drive is the name of it (the name of the "volume") but the folder structure and file names are an exact duplicate, then all you will need to do is reconnect the files using the "Manage Referenced Files" command that we looked at earlier.

I hope you've enjoyed this in-depth look at managing files with Aperture. If there are any topics you'd like to see covered in future Aperture tutorials, be sure to let us know in the comments! 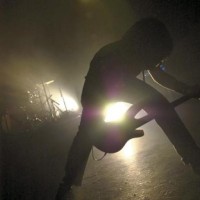