An Introduction to Exposure Blending with RAW

If you regularly shoot landscapes, you'll soon make a discovery that seems obvious when you think about it - the sky is much brighter than the land. This is a real problem when you're taking photos of sunsets, especially when the sun is still above the horizon. The sky is so bright that if you expose for sky, anything on land goes black. If you expose for the land, the sky is washed out and you lose the beautiful sunset that you set out to photograph.

This tutorial will introduce the idea of exposure blending, combining two versions of a RAW image to correctly adjust the exposure in different areas. We'll be using two examples - a New Zealand sunset, and a stunning piece of Oxford architecture.

For years photographers have been solving the problem by using grey graduated filters. For those of you not familiar with grey grads, as they're known, it's a square or rectangular filter that is clear at the bottom and grey at the top. It clips into a holder that screws onto the front of your lens, and can be moved up or down so that the grey half blocks some of the light from the sky. It evens out the light levels so that you can include both the sky and the foreground in your photo.

Grads are great, but they're not perfect. They work well when the horizon is a straight line across the photo, but badly when it's not. Good quality grads are expensive - and cheaper grads can give a magenta colour cast instead of being neutral. Using a grad is time consuming; it means you have to put your camera on a tripod and line the filter up in the holder - not ideal if you're faced with a photogenic, rapidly changing scene and you just want to take lots of photos while the light looks fantastic.

The concept is simple, take a photo in the RAW format, and then in your RAW converter make two conversions; one for the foreground and the second giving a good exposure for the sky. You then blend the two together in Photoshop CS or Photoshop Elements.

This is a good technique to use when you want to hand hold the camera, or if you're taking photos of moving objects such as seabirds or people. It's also good if you're faced with a rapidly changing scene and you want to take as many photos as you can before the light changes - which often happens if you're travelling to an exotic and exciting location. It's also a good technique to use on old photos that you may have, bringing new life to old images.

For this technique to work, it's important to shoot in the RAW format. Why is this? A RAW file is a record of all the data that your sensor captured at the point of exposure. If you shoot in JPEG, the camera processes the raw data, and compresses it into a file saved in the JPEG format, discarding all the unrequired data along the way. And once it's discarded, you can't get it back.

A RAW file, on the other hand, contains all the data from the exposure and you do the conversion yourself in a RAW converter such as Adobe Camera RAW. This gives you a lot more information to play with, and it's this extra information that you use to get the most of the exposure blending technique.

In this tutorial I'm going to show you how the exposure blending technique works, using a photo that I took in New Zealand as an example. I'm going to explain how I did it with Adobe Photoshop CS3. If you have Photoshop Elements the technique is virtually identical (I'll point out any differences along the way).

I opened the RAW file in Photoshop CS; which automatically opens the file in Adobe Camera RAW. I then adjusted the RAW file, ready for the first conversion. Once I was happy with all the settings, I set the exposure to give a good brightness for the sky, including as much colour and detail as possible. If you're not used to shooting RAW, it's amazing how much detail has been captured, even in an overexposed sky. 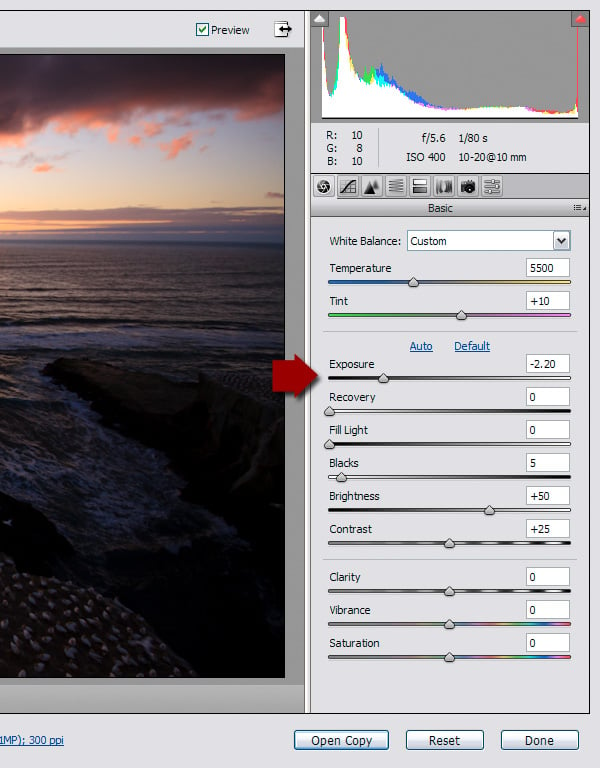 For the conversion, I needed to create a file with the maximum information possible saved in it. The format that does this is 16 bit Tiff. To set it, I clicked on the link at the bottom of the screen:

In the next window I set the depth to 16 bits/channel. I also set Space to Adobe RGB (1998) (sRGB IEC61966-2.1 serves just as well) and Resolution to 300 pixels/inch (300ppi is the industry standard for photo quality reproduction). Photoshop automatically set the size to match my RAW file, in this case 10.1 megapixels (the photo was taken on an EOS 40D).

Then I saved the image, adding the suffix '-sky' to the file name so I could keep track of which photo was which. 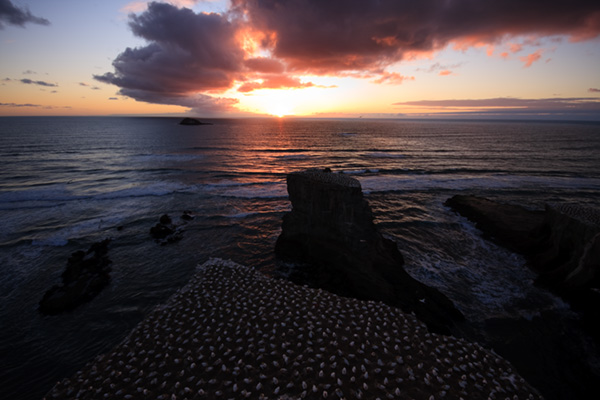 Next I repeated the process, this time setting the exposure levels on the RAW file to give a good exposure for the sea: 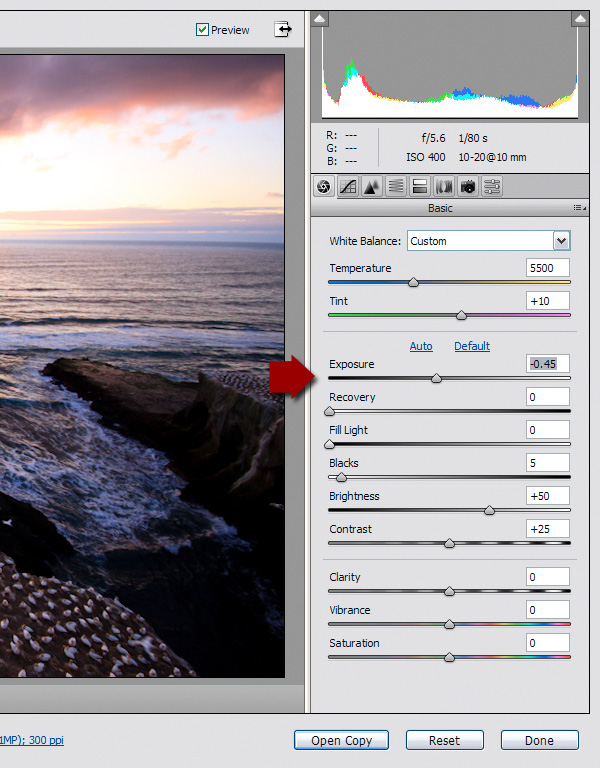 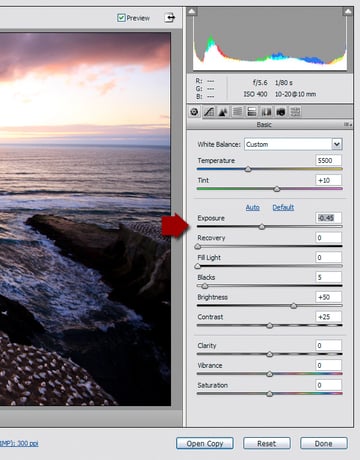 Don't be afraid to leave the foreground a little dark for effect when you're doing this for yourself - we're not after a HDR image showing detail in every part of the image here. The idea is to create a natural looking photo. I saved the second photo with the suffix '-land'.

I now had two files - one with a well exposed foreground, and the other with a well exposed sky. The next step was to blend them together. I opened both files in Photoshop. I started with the -sky photo and used Select > All then Edit > Copy to copy it. Then I went to the -land photo and used Edit > Paste to paste the sky photo over the land photo. I now had an image with two layers (Window > Layers brings up the Layers palette if you don't see it). 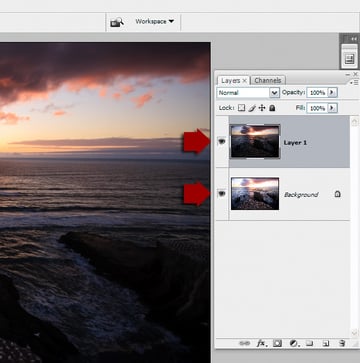 The next step is to erase the sea on the top layer. This allows the correctly exposed bottom layer to show through. I used the rectangular marquee tool for this: 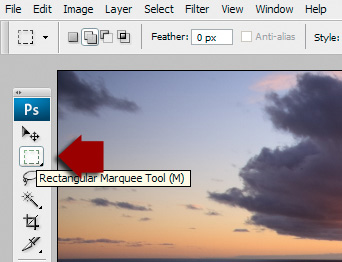 Then I selected the sea. You can see the selection below, marked by the dotted lines.

Hitting the backspace button erases the selected area. But there's a problem - if I just erase the sea I end up with a distinct line across the photo: 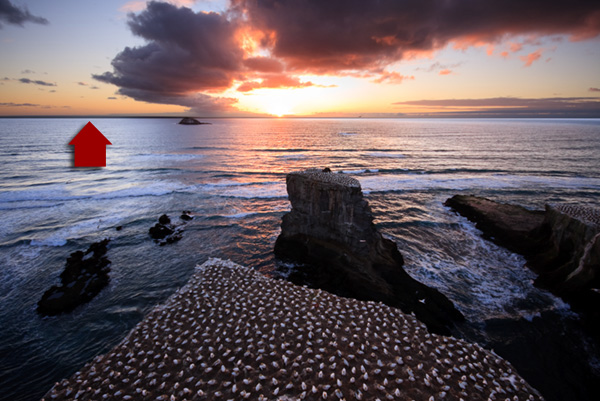 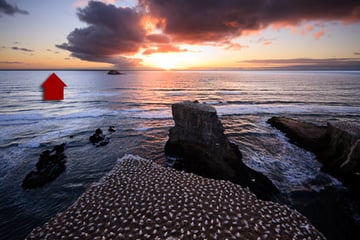 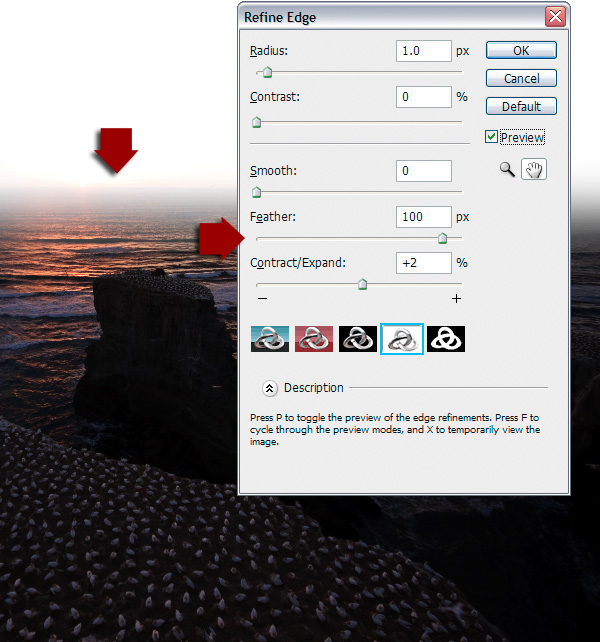 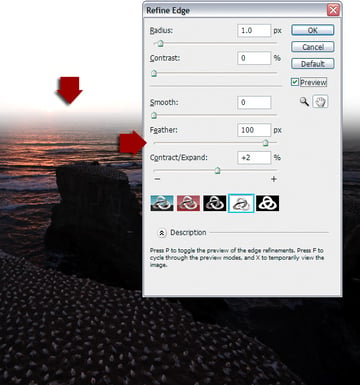 Now I can erase the selected area, giving me the final image. All I had left to do was go to Layer > Flatten Image to flatten the layers and save it under a new name (so that I didn't overwrite the original file): 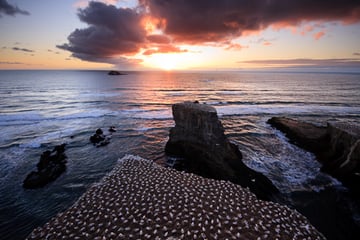 This technique is also very useful for enhancing photos where the horizon doesn't form a convenient straight line across the image. I used it for this photo that I took in Oxford. The photo already had a cloudy sky, but I wanted to turn it really dark so that it looked like an approaching storm, and the light on the building would make it glow against the dark sky:

I followed the same procedure as for the seascape above, making two RAW conversions, one for the building and one for the sky. I opened both images in Photoshop CS and copied the sky exposure and pasted it on top of the building exposure: 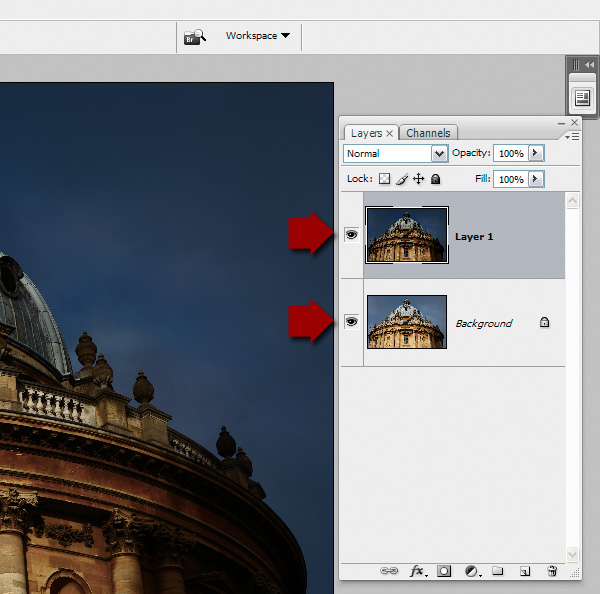 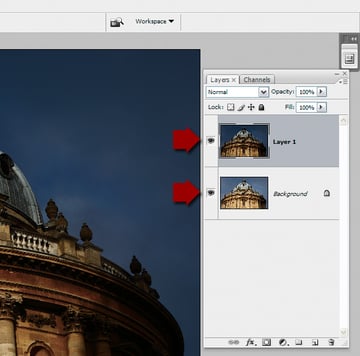 The next step is different because I had to choose a different way of making a selection due to not having a straight horizon line across the photo. Luckily, the sky is an even tone, which meant that I could use the magic wand tool: 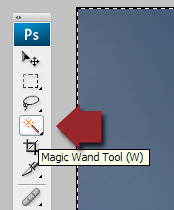 I set the Tolerance to 32 and clicked on the cloudy sky several times until it was all selected. I did this on the bottom layer because the sky on this layer is brighter than the building, especially on the right hand side: 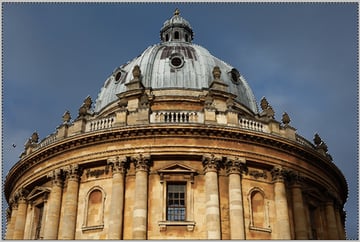 Then I went to Select > Inverse. This reverses the area of the selection, so that the parts of the photo that weren't selected are now selected, and the parts that were selected (in this case the sky) are now unselected: 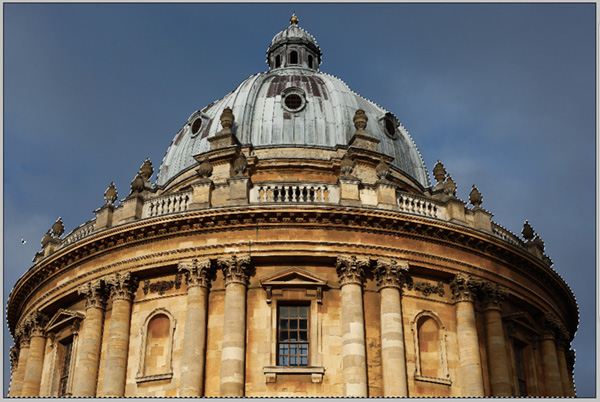 I clicked on the top layer to activate it and hit the backspace button, deleting the selected area (the building). There was no need to use the feather command in this photo because the outline of the building is clearly defined against the sky. The test is to zoom in at 100 percent and see if the transition looks natural. If it does, then this selection method is OK. If the transition between the building and the sky looked unnatural, as in the seascape example above, then I would need to feather the selection: 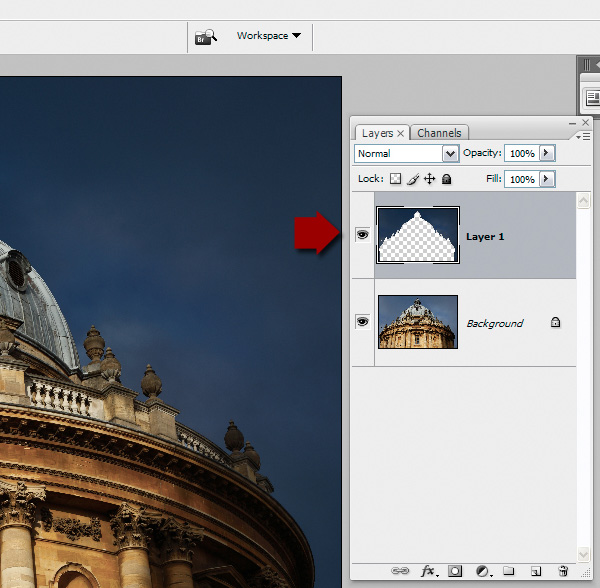 This is the photo at 100 percent magnification. It's impossible to tell that I used two different exposures to create the image: 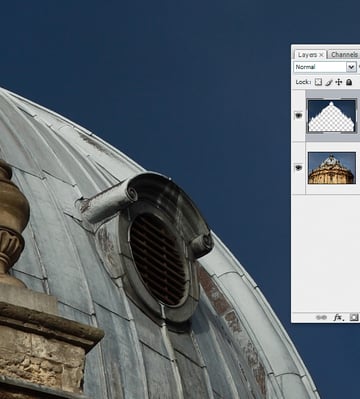 This is the final image:

Post-ProcessingCamera RAW
Did you find this post useful?
Yes No
Would you like to provide feedback (optional)?
Cancel Submit
Want a weekly email summary?
Subscribe below and we’ll send you a weekly email summary of all new Photo & Video tutorials. Never miss out on learning about the next big thing.
Sign up