Yesterday we shared a tutorial on how to Create a Pride Rainbow Gradient Overlay in Adobe Illustrator. Today, we'll keep the celebration going with a similar technique. In this tutorial you'll learn how to apply a rainbow overlay with images in Adobe Photoshop.

Maybe you've seen the proliferation of rainbow icons and profile pictures around the 'net after the historic marriage equality ruling in the United States and want to join the fun. Or maybe you're planning a pride event and want to make some themed images for promotion. Maybe you just love rainbows! Whatever the case, this tutorial will have you putting rainbows on everything in no time.

You'll need two images for this tutorial: a base image that you want to give the rainbow treatment, and a rainbow. I've included a 2000-pixel rainbow flag image file with this tutorial.

Here's the base image I'll use to demonstrate. It's a picture of me, a simple headshot that I use on a few social media accounts and in our company directory here at Tuts+.

All kinds of images are suitable for a rainbow overlay but simple graphic compositions tend to work best.

2. Prepare the Base Image

In this step you'll get your base image ready for the rainbow overlay treatment.

First, open your base image in Photoshop (Control-O). Then resize the image (Control-Alt-I) to your desired final output size. In theory you could resize the image later, but I like to work at the output size so that I get an accurate representation of what the end-product will look like all along the way.

Depending on your image the rainbow might be too large or too small. Use the Free Transform (Control-T) tool to change the size of the layer so that it matches your base image.

Next change the Blending Mode of the rainbow layer to Hard Light and reduce the layer Opacity until it looks right to you. In my case, that was 50%. Some images might also work with Soft Light instead.

Now, you could stop there, but let's take it one step further. Looking at the example above you can see that the base image looks a little bit washed out. Let's bring back some of the detail in the image.

Select your base image and Duplicate (Control-J) it. Drag the duplicate layer to the top of the layer stack.

Next, change the blending mode of the duplicate base layer to Multiply and reduce the layer Opacity to 50%.

In this, the final step, you'll bring back the contrast lost when you added the detail layer.

The s-curve pushes the highlight values higher and the shadow values lower, creating a higher-contrast image. Adjust the points on the curve until you are happy with the image. You can also reduce the Opacity of the layer for fine control.

If you like a slightly less saturated rainbow you can apply the curve to the detail layer instead of the entire image. Hold Alt and click the line between the Curves layer and the layer below it. That's what I've done with my image.

Here is the final result:

I like my image with a lot of rainbow, but if you'd prefer a more subtle effect you can reduce the Opacity of the rainbow layer and increase it for the detail overlay layer. Here's a version with 30% and 70% Opacity, respectively:

So, to recap, here are the main steps in this tutorial:

The key part of this tutorial is playing with the combination of Blending Mode and Opacity. Each image requires a slightly different approach, but with Adjustment Layers and fine control you should be able to produce the kind of rainbow images you'd like. 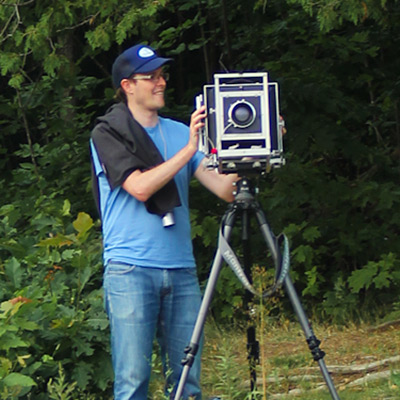