Creating a Subtle Black and White Street Portrait in Calgary

For one of my final projects in college, I wanted to show how it's possible to understand someone by just staring at his or her face. Looking deep into their eyes, and knowing they've had a rough life or that they are still young, and fresh with energy. So my idea was basically: take 25 portraits of random people in Calgary. This tutorial will show how I've processed those portraits.

The purpose of this project is too look back on the past two years and recap on what I've learned. I decided to take this assignment and show not only how my photography has grown, but how I have grown as an individual as well. That's how "25 Portraits of Calgary" aka "project25" was born. All of these portraits from Calgary (the city where I live) are in black and white, focusing on the texture of their faces and their eyes. Here is one picture from the first outing I did. 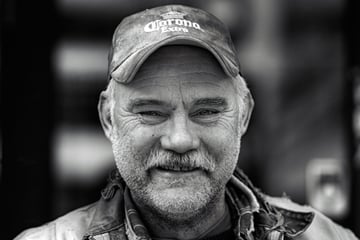 In this tutorial I'll be walking you through the workflow of getting this final image. I'll go over everything from shooting the frame to cropping the final product. Let's get started.

The idea I had in mind for the final product was to have single faces nearly filling the frame with beautiful bokeh as the background. Before leaving my apartment, I fixed my camera settings for that portrait style.

I left the apartment with my 7D and 85mm in one hand and my Sekonic L-358 light meter in the other. That's all I needed for this assignment; I found it redundant to have to carry around my backpack or any other gear.

I found the best times to hit the downtown core were around 9:00am - 11:30am and around 3:30pm - 5:30pm. The morning is good because the majority of people have already made it to work and you're left with either the stragglers or the people that aren't downtown to work. The afternoon time I suggested is good because everyone is getting off work, and a lot of them need to either walk to their vehicles, or walk to public transit.

Shooting with a wide aperture means there will be heavy bokeh, so the background is not that important. My main concern when shooting the models was the direction they were facing in relation to the sun. I wanted to avoid shooting into the sun, causing a silhouette, and instead shot with the sun behind me. I tried to position the model so the sun hits them at about a 30degree angle. This causes some slight shadows across the face, but nothing over the top.

Usually I found people somewhere on a sidewalk where there are tall buildings around. I tried to position myself near the edge of the sidewalk and have the model closer to the building. With the 85mm lens, the model usually fills the frame nicely. I asked them to just look into the camera, and be natural. If they wanted to smile they could, if not, it wasn't not a big deal.

I took the picture, and checked it over on the LCD. If everything looked good I took a second shot for precautionary measures. It never hurts to have two. If the first shot didn't turn out, I adjusted my settings, usually just the shutter speed and fired off the second shot.

A Quick Note... Although the final pictures are in black and white, I shot the originals in color.

Step 04: Get rid of the color and adjust those exposures!

Once I got home, I imported all my photos for the day. I picked out the ones I liked and deleted the rest. Then I started the individual edits.

What we will be doing is creating 3 different images from our original and using them to create a HDR photo. Let's choose the photo we're going to edit today and open it up with CameraRaw.

The only settings we will touch in CameraRaw are Exposure and Saturation. With the original open, set the Saturation to -100. Save the file as a .tif file. Then with the Saturation still at -100, change the exposure to -2 and save as a .tif file, making sure to add a "-2" or something similar to the file name. Do the same thing again except set the exposure to +2 and add something like "+2" to the file name instead.

We should now have four pictures. One CameraRaw file, and 3 .tif's with a 2-stop increment between each. 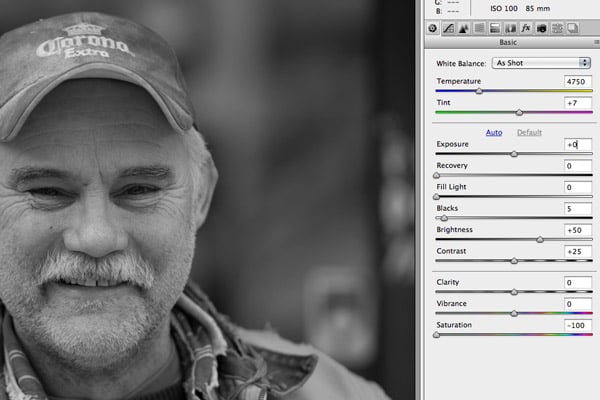 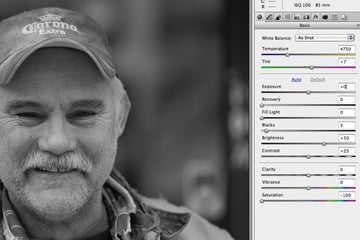 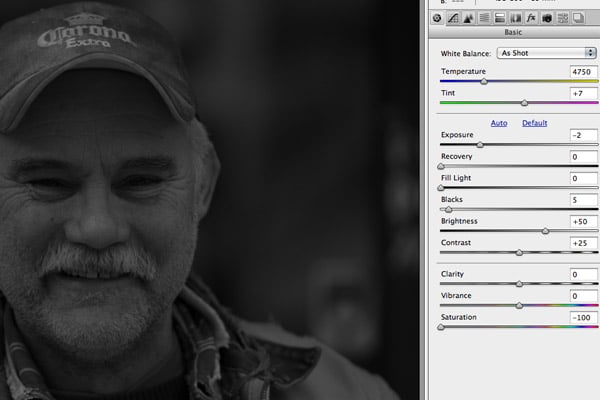 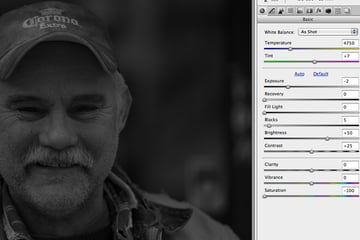 We'll be using Photomatix Pro 4.0 to create the HDR effect. A free trial version is available for download. Once in the program, click "Generate HDR image" and select the 3 .tif's files we saved in CameraRaw. Click OK and ensure the increments are set to 2, 0, -2 and then click OK again. If the increments are off, double click them and type in the proper value. I never adjust any of the settings in the next dialogue box, so click Generate HDR. 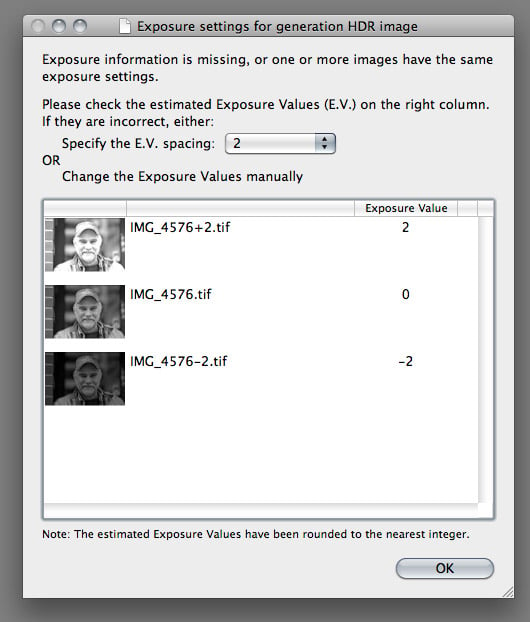 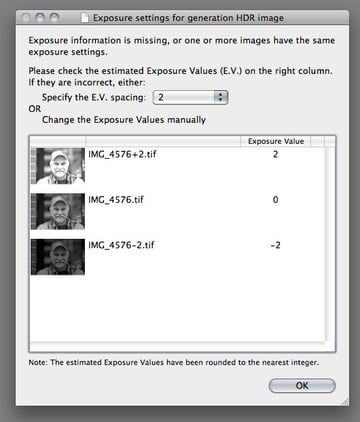 Photomatix will then get to work and produce an image, which will probably look blown out in places. Don't worry; we can fix this with some simple Tone Mapping. Once inside the Tone Mapping window, you will need to play around with the settings. Here are the settings that I use for the black and white portraits: 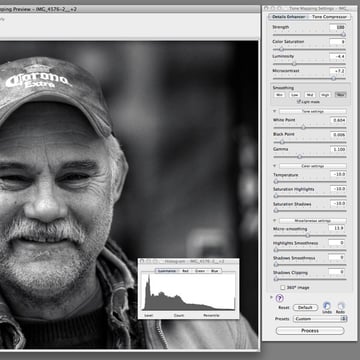 I won't talk about what the settings do what as Peter Tellone has already written a fantastic article about processing HDR's.

The main idea behind Tone Mapping HDR's is to get your image flat. You don't want any heavy shadows or bright highlights. There are exceptions of course, as such in my picture. Once you have your picture looking relatively flat, click Process and then save the result as a .tif. 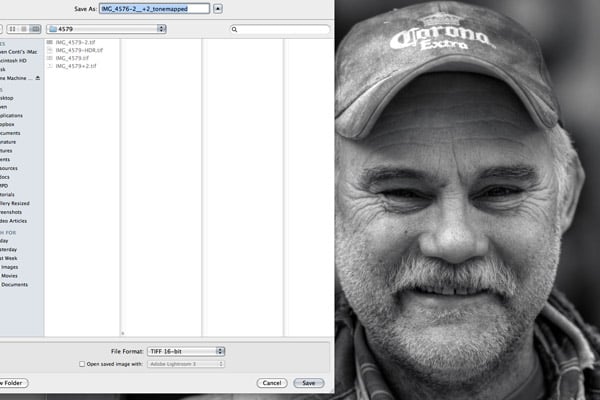 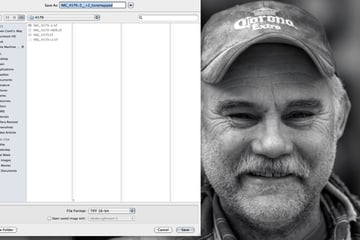 The first step I always do when starting an edit in Photoshop is duplicating the original layer and then locking it. This prevents any permanent changes to the original photo.

Our first actual edit will be sharpening the image. Rename our duplicated layer to "Sharpen" and then select Filter > Sharpen > Unsharp Mask. The values in this box will depending on your image. I generally look at the detail in the forehead, eyes, cheeks and chin. I want a crisp result, not something overly sharp. You can see the values I used in the screenshot below: 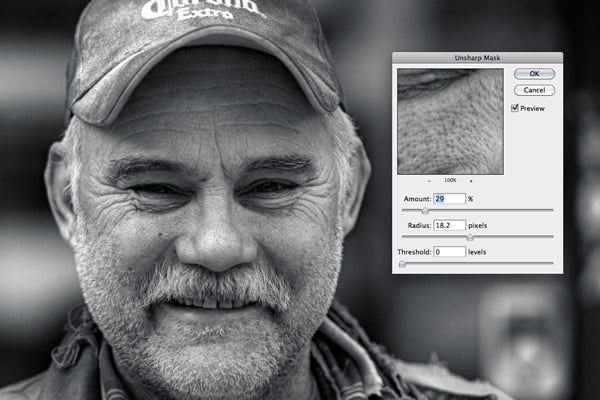 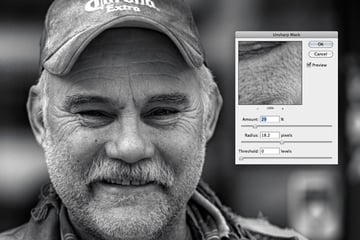 The rest of the editing process is basically dodge and burn. We don't want to do many touch ups on the face because the main concept is the true faces of Calgary, how I see them. These are not professional models and do not have perfect skin. I want to see the imperfections and capitalize on them.

Let's duplicate our "Sharpen" layer and rename a new layer to "Dodge". Select the Dodge tool by hitting O. Choose a brush with a hardness of 0 and a fairly large size, 200px+. Set the Exposure value somewhere between 20% - 50%, depending on the shadows on your model's face. We are going to be subtlety brightening the shadows on the face, so set the Range to Shadows. 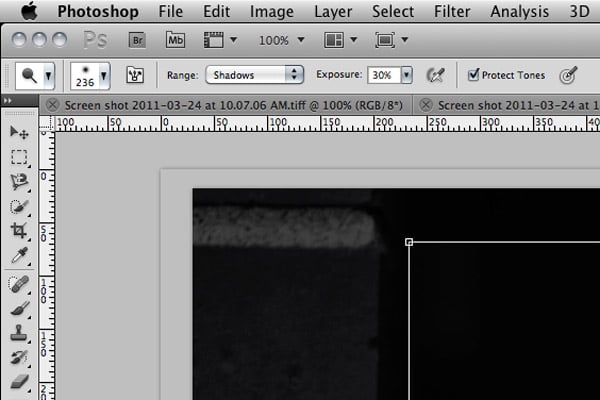 A Quick Note... If you have a tablet, I would advise using it because we will be doing a lot of hand drawing in the next couple steps.

With your large brush selected, begin drawing over the shadows on the face. I almost always touch up the eye sockets first because they are usually too dark. From there you can brighten the under side of the neck, or the sides of the face if there are harsh shadows.

If your image has overly bright areas, you can try dimming them down with the Burn tool. I haven't had to do this yet for any of my portraits in this project, but it's always a possibility.

We're not quite done with the Dodge tool yet. We need to bring out the eyes. Duplicate the "Dodge" layer and rename the new layer to "Eyes". Keep the same brush you used in Step 07, but reduce the size so it easily fits inside the eye of your model. For the eyes I set my Exposure to 50% and usually only make one pass.

Making sure to include both the whites and the pupils, click and hold to paint over the entire eye. After doing one eye, do the other and then zoom out and check them. I find it's best to check after doing both eyes because seeing the effect in just one eye looks strange and might cause you to abandon the technique.

If you find the eyes too intense, decrease the opacity of the "Eyes" layer until you get them where you like them. 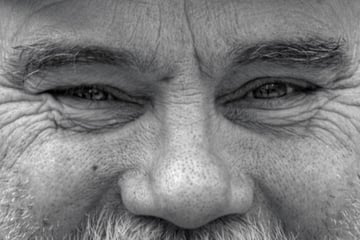 Step 09: Bring back some contrast

Peter Swayer, a PhotoTuts writer, gathered a round up of 60+ Photoshop Actions. I took a look through it and came across "PS Actions - HDR Post Effects". I love to use this set of actions on some of my HDR's, including my 25 Portraits of Calgary series.

Load the actions into Photoshop (you may need to restart Photoshop) and open up your black and white HDR we are working on. Duplicate your "Eyes" layer and rename the new layer to "Maximizer". Find the HDR Post Effects action folder and run "Maximizer - Medium". Once this is done change the "Maximizer" layer's blending mode to Soft Light and the opacity to around 60% - 70%.

Because this action was applied to the entire image and it increased the contrast, the work we previously did on the eyes is now gone. To restore that work, create an empty layer mask on the "Maximizer" layer. Choose a soft, black brush and paint the eyes back in.

If you feel your image needs to be cropped, this is when it's done. Choose the crop tool and crop away! 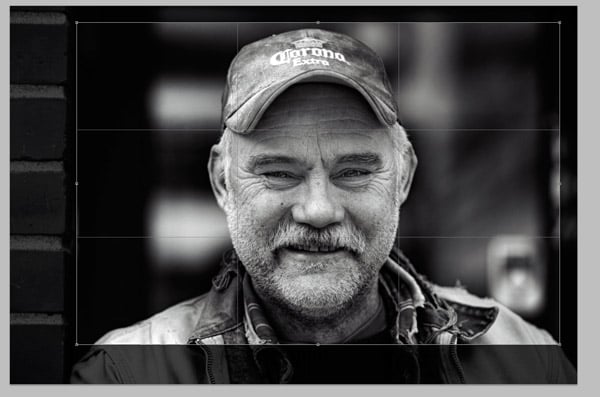 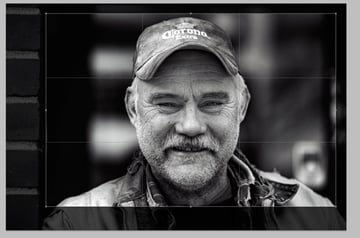 That's how I go about editing my 25 Portraits of Calgary images. Please post any questions you have down in the comments below. Thanks!

Owen Conti
Hi, I'm Owen, a New Media student in Calgary, AB. I enjoy learning new photography techniques and learning from what others have done. Hopefully you can enjoy what I have to offer as well. Thanks!
Weekly email summary