Food photography is a highly specialized form of studio work. It requires some knowledge of cooking, a firm grasp of lighting and some creative juices to bring everything together. Being a slightly obese American, one of the most basic foods we love to gorge ourselves is a good, old hamburger. But the first rule of food photography is that boring food makes boring photographs. So the subject of this tutorial will be a special burger on an onion bun with swiss cheese, spring greens, tomato and onion. Most of this advice will relate directly to this hamburger assignment, but many of the principles apply to all food photography.

Preparing a picture perfect hamburger patty starts at the grocery store. We want to create a classic look. This means avoiding pre-shaped patties. They might save you a little time at cook-outs and you might even think they taste the same, but technology is not advanced enough for us to really taste photographs. We're going for appearance.

I also avoid beef that has been ground too finely. A thicker, chunkier grind makes your burgers look more full and homemade. Usually ground chuck has the appearance we need. Look for a wavy texture instead of a smooth appearance. When shaping the patty, do it loosely. You don't want to loose that texture. Pay special attention to the edges which is about all that will appear in the picture. 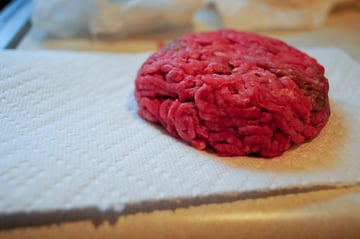 This burger probably isn't going to end up in anyone's stomach. In fact, when we're finished, it probably won't taste too good anyway. So don't worry about cooking the meat to a certain temperature or anything. Cook it on high heat to get that slightly charred look on the outside. Try not to affect the shape or alter the texture. Don't press down or squeeze the patty. Pay special attention to the sides. I cooked my patty up against the side of the pan to make sure the edges cooked well and evenly. People with cooking experience will tell you to only flip a burger once during the cooking process. For a photo, flip often. It will avoid burning and allow us to properly monitor the look of the patty. 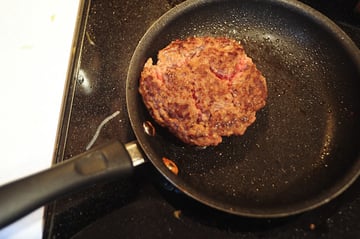 Most of time, food is shot at room temperature. In our situation, it is especially important. If the burger is immediately built around a hot patty, the cheese will melt and there is a possibility that the greens could wilt. Another important step to almost all food photography is drying.

Meats, pastas and anything that can look greasy will look extra greasy if they aren't dried. I wrapped my patty in paper towels for 15 or 20 minutes to allow it to cool and dry at the same time. Moisture is a very important consideration. Vegetables and fruits on the other hand need to look fresh and juicy, so often times these items are sprayed with water right before the photos are taken. 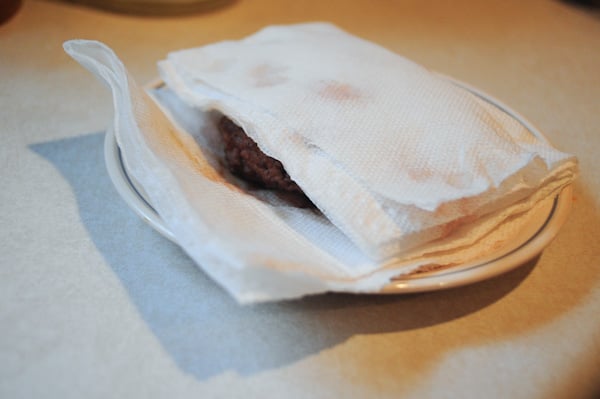 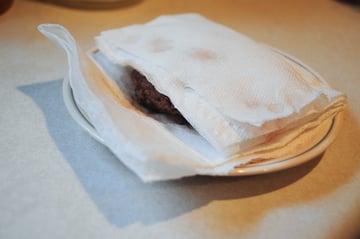 I chose an onion bun because it had a lot of texture. It added to the photo. Choose your items based on what they add to the photo. All of the elements of this burger work together. If I had chosen a plain roll, it would have looked out of place or at least not as interesting. I also actually used two buns. The buns I purchased were uncut and rather slim. So to create the top bun, I just barely cut the bottom off of one bun. Then to create the bottom bun, I barely cut the top off of another. This created a super thick “double" bun. 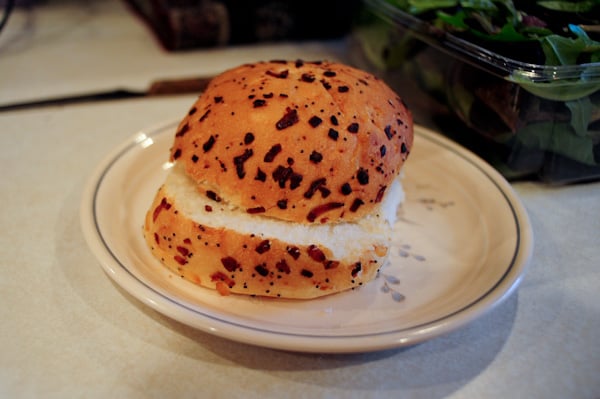 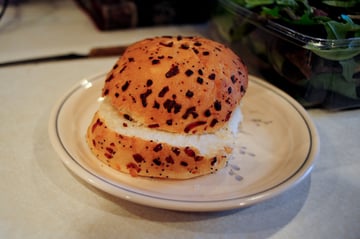 For the greens, I wanted to create two separate layers. The first layer between the bottom bun and the patty. I made this layer extra thick because I knew the patty would smash it down a little. The greens I had contain both green leaves and dark purple greens. I arranged the edge leaves one by one to make sure that the pretty edges would be photographed. This also ensured that both the dark and light leaves would be showing in the final product. 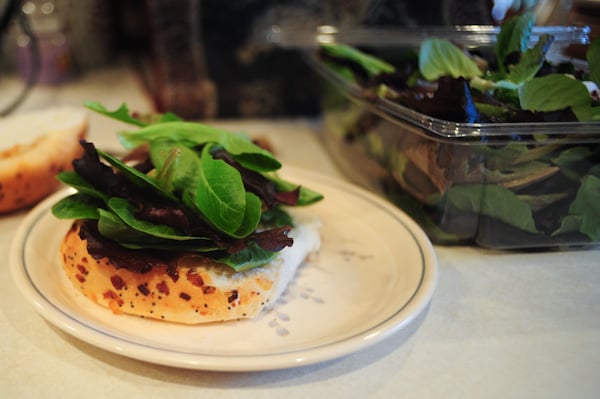 Step 6: Adding the Patty and the Cheese

Add the patty so it is close to the edge of everything. You don't want it to vanish under all of the greens or the cheese. Also make sure that it is sitting up high enough that it doesn't sink into the bun. If it does sink, add more greens underneath to prop it up. I chose swiss cheese for this burger because the holes make it easily identifiable. I wanted people to know it was swiss, so I carefully arranged it so a hole would be visible. Keep in mind that you'll most likely only be emphasizing one side of the dish, so concentrate of making one side look really good. 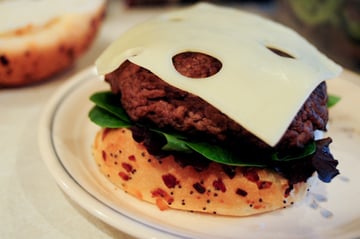 There is another reason for making sure ingredients are dry. In the relatively long time it takes for a photo shoot, meat or very moist vegetables will leak their juices all over your nice plates or other items in your photo. For this reason, even a tomato should be patted dry before shooting. In the case of the burger photo, only the edge is showing, so there is little reason for it to look juicy. But if the subject of the photo were a salad where a whole slice of tomato is exposed, it should be dried and then sprayed gently so you can control where the moisture is. Another, less drastic option, would be to add the tomato right before you were ready to make your final image. 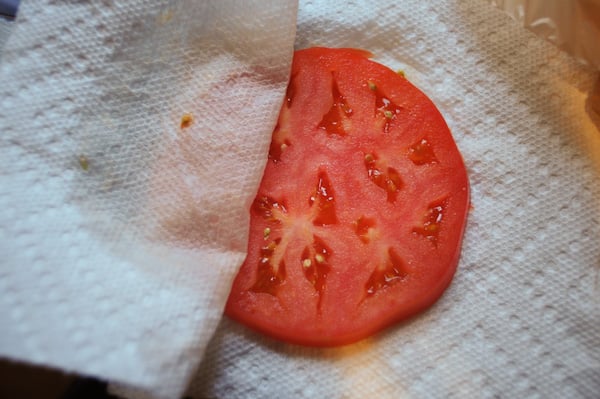 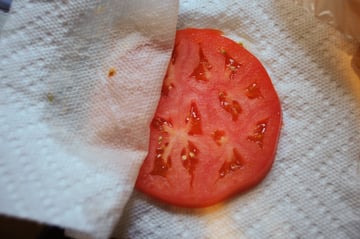 Step 8: Bringing It All Together

Below is a photo of the burger completely constructed. When building the burger, I intentionally overstuffed it. You can see from the picture that it looks ridiculously huge. The lens you choose to shoot with can alter how large things will appear. And it is easier to much easier to squeeze the hamburger to make it look smaller than attempt to rebuilt it to make it larger. 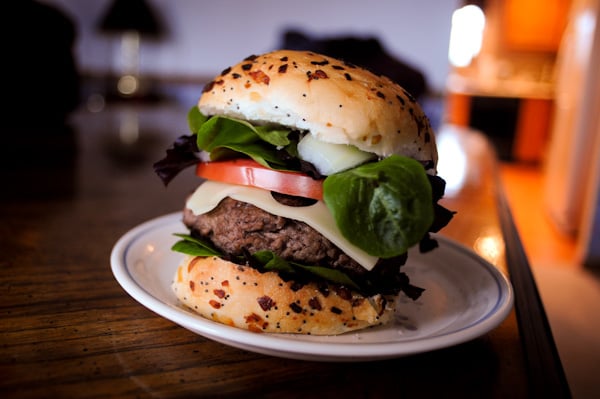 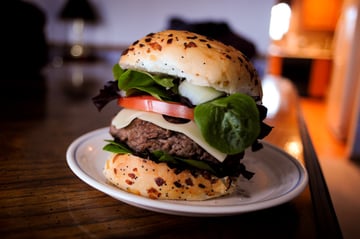 This should be mentioned first. Most food photographs are backlit, but not in a bad way. It's just that the lighting comes from behind. It not necessarily a rule, but for some reason, it just works. Whenever I shoot food, I usually start with backlighting. There are some foods that it just doesn't work with, but for the most part it's the best place to begin.

The shot below was taken from the same angle that my final shot was taken from, I just took it from much closer with a different lens. As you can see, there is a light set up with an umbrella behind and to the left of where the plate will be placed. This is the key or main light. There is a second light opposite that light sitting on the table. This will be the fill light. The key light is set on full power and fill light is set on really low power.

Even though it is coming from behind, the backlight is the key light and will be the main source of light for the photo. When you have the burger plated and ready, turn on the key light, but not the fill light. You want to establish your base exposure. The photo below shows the key light properly exposed. Notice the dark shadows to the left on the front of the burger. Once you've got the exposure set on your camera, you will no longer adjust. You will only be adjusting the power of the fill light, which will fill in those shadows on the front of the dish. 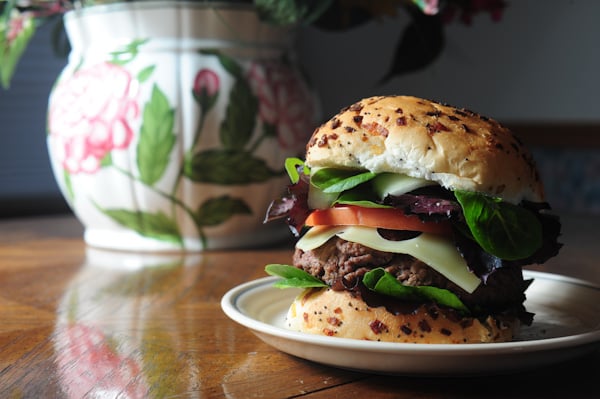 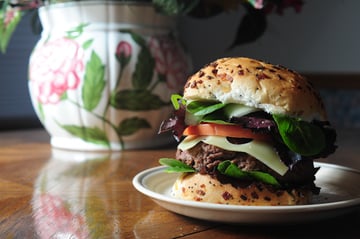 When working in such close quarters, sometimes your fill light will not go as low as you want it to. If when you turn on your fill light on its lowest power, and it still is overexposing the image, place a sheet of white paper or a plastic bag in front of the light to diffuse it further. The addition of the fill light should be subtle. It should not overpower the key light. The photo below shows the fill light after it has been added.

Getting the lighting right is only half the battle. There are two more things to think about: your lens and your environment. Lens choice is important. My instinct when first shooting food was to use a wide angle lens because I like to get as physically close to my subjects as I can. Now I like to use normal lenses like a 50mm or a 85mm (on an FX camera, a 35mm or 50mm on a digital sensor).

For this photo, I used a 50mm lens with a macro filter. For the environment, consider what the food item expresses. Is it a dish from a certain culture? Is it organic or healthy? Is it indulgent? Is it comfort food or elegant and gourmet? Have the environment of the photo match the food. Also consider the colors in your food, and try to match them or complement them.

For the burger, I felt that it was a little sophisticated and fairly healthy. It also featured bright greens and a touch of red. So I chose to add a vase with red and greens in it. But the “environment" can be as simple as some elegant utensils.

Either way, take these tips and go make some some excellent and almost edible food photographs! If you have any examples of your own, I'd love to see them in the comments. 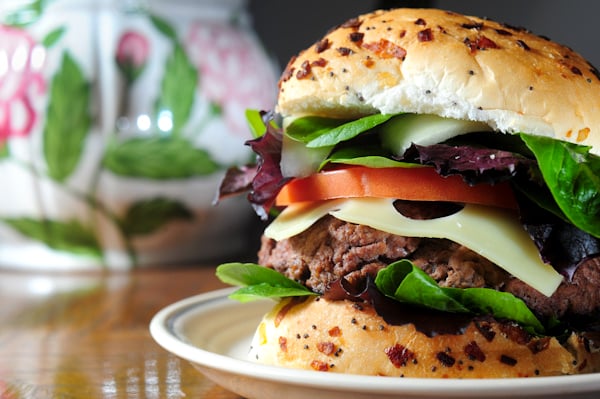 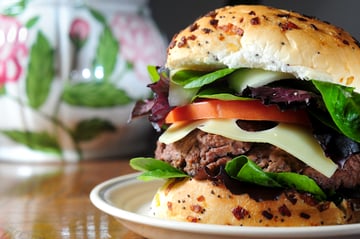