How to Capture Emotive Environmental Portraits

In this tutorial, we'll be walking you through an explanation of exactly what an environmental portrait is, looking at how to approach different types of subject, plan for capturing a particular event or celebration, and the best equipment to use.

An environmental portrait is one where you take a photo of a person that includes enough of the background to tell a story about your subject. There are two broad categories. The first is when you put the person into an environment which is not their own. This is often done in fashion and editorial photography and can be very creative. The background will often be very brightly coloured or unusual in some way. They provide a stunning backdrop against which to photograph the people in the photos.

The second is when you photograph someone in their natural environment, including elements of the background to tell the viewer something about the subject. This is the approach taken by photojournalists, documentary photographers, travel photographers and also some fine art photographers. You will see lots of this type of photo if you read National Geographic.

This is not an environmental portrait - the background is blurred and we can't see any of the girl's surroundings.

Fashion and editorial photographers like to put someone in an environment that is not their own (an editorial photographer in this context is someone who takes photos of well-known people, such as rock stars, to illustrate magazine articles about them). A good example is someone taking photos of a fashion model in a grimy, run down street. The model is not from that street, and the photo tells you nothing about her life. The street is just an interesting background for the photo.

This type of photography can be extremely creative - just take a look at the fashion stories in magazines like Elle and Vogue. These fashion stories can be a great source of inspiration for your own photos. If you want to try your hand at photographing a friend, partner or model, you will get plenty of ideas from the pages of fashion magazines.

The key to being successful with this type of photography is to find suitable backgrounds. Some ideas: ruins, fairgrounds, woods, beaches, parks, childrens' playgrounds, city streets. 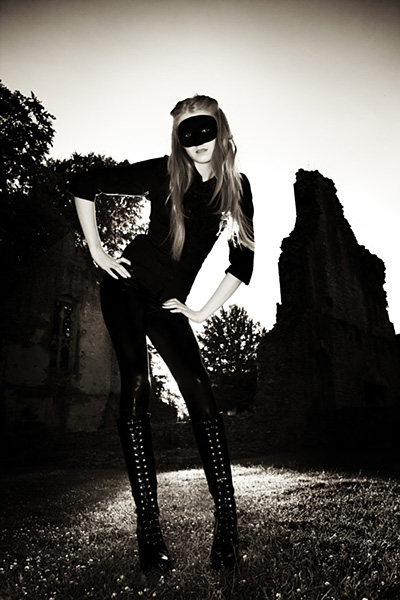 This photo was taken at some local ruins - a spectacular backdrop for portraits.

This type of environmental portraiture is the opposite from the first. The subject is photographed in their natural environment and the background tells you something about the person in the photo.

This is the sort of environmental portrait taken by travel photographers, documentary photographers and photojournalists. It is the kind of photo that you may take when you are on a round the world trip or a holiday in another country. It is also the type of photo you can take of interesting characters in your own country.

This photo was taken in Bolivia but is not an environmental portrait. It's a portrait of a local woman, but the background is just a blur - it doesn't tell us anything about her. 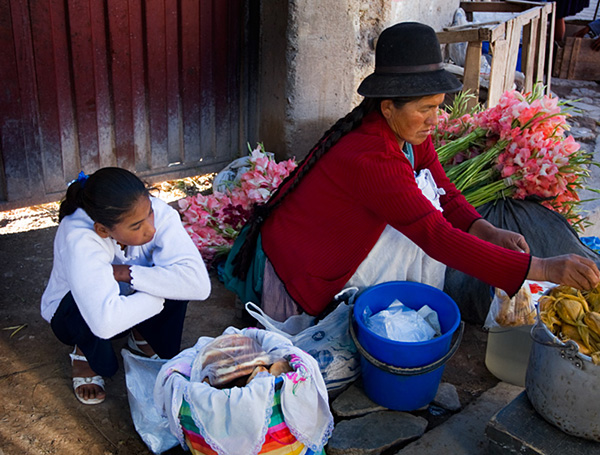 This photo was also taken in Bolivia and is an environmental portrait. The background of the photo shows the woman and her daughter in their natural environment.

It can be very difficult to approach a stranger to ask them whether you can take their photo, especially if you are in a new country and you are unsure of the local customs and do not speak the local language.

It is a good idea to read up on the local culture beforehand if you are in a place that you are not familiar with. There are some countries where people do not like being photographed. In Bolivia, for instance, we were told by an indigenous woman that her doctor told her that if someone takes her photo, they are taking a little of her health away. She refused to be photographed - and so did just about every other indigenous person that I asked. If you know that people do not liked to be photographed, then you will not be put off or take it personally when they say no. You also know that you have to find another solution (there are some good ideas later on in the article if this happens to you).

The secret, if there is one, is to just do it. If you want to photograph someone, go up and ask. If you do not speak the language, point to your camera and smile - they will soon let you know if they do not want to be photographed. If they don't, respect their wishes. How would you feel if a tourist in your country kept trying to take your photo because to them, you are a curiosity?

If you speak the local language you have a big advantage. Talking to people is often the best way to ask them for a photo. If you are genuinely interested in them, and talk to them about their lives and the place they live in, not only are they far more likely to agree when you ask to take a photo, but you will learn something new about them and the place you are visiting. 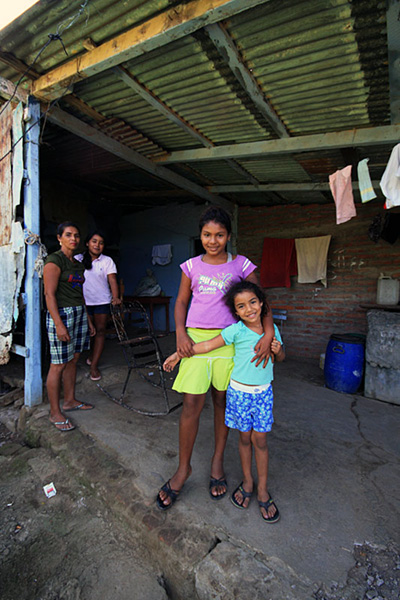 The girl in the yellow shorts laughed at me and pulled a face when I passed by. Seeing that the people were friendly (the photo was taken in Nicaragua) I asked if I could take a photo and they agreed. I used a wide angle lens to include plenty of background, and the girls' mother and sister.

If you are not comfortable with asking people if you can take their photo, or you do not speak the language, or you already know that more than likely they will say no, there are other approaches.

One is to take a photo where the person is a small part of a big scene. The idea is to compose the photo in such a way that the person gives scale and a human perspective to the scene. 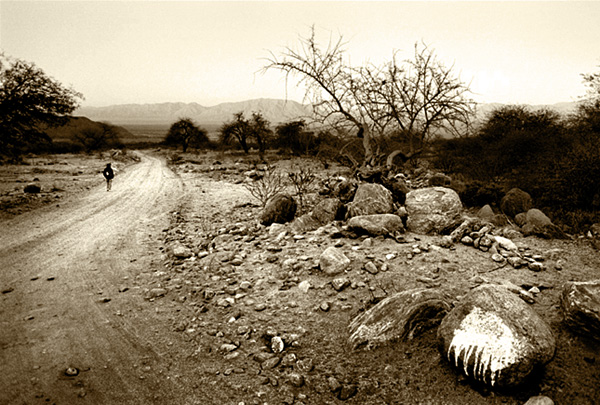 This photo was taken in a remote town in Argentina. The man in the photo is such a small part of the composition (plus he was walking away from me) that I had no need to ask him for permission.

Festivals, Fiestas, and Other Celebrations

No matter where you are, local festivals and celebrations are always a good opportunity to take photos of the local people. People are having fun and involved in the moment. They are in a public place and know that there will be people taking photos, both other locals and tourists with cameras. This makes it a lot easier. Often they will be so engrossed in what they are doing that they will not even notice you.

These people were so caught up in their religious ceremony that they ignored anyone taking photos. This is a big event in the area (northwest Argentina) and there was even media coverage, so they were used to cameras.

Organised excursions are a great way of getting some photos of local people. Anybody you visit on the way will be receiving some money from the tour operator and are therefore normally quite happy to be photographed. They often speak English and are very happy to talk about their lives so it is also a good opportunity to learn more about the local culture.

This photo was taken at a hotel that was a stop on an excursion in Nicaragua. The man was quite happy to pose for photos.

Sadly, in many western cultures photographing children is viewed as a suspicious activity. In third world countries though the attitude is different and quite often no-one seems to mind.

Kids are easy to photograph because they like to play around for the camera and show off. You can get some really good photos. In some places if children see you with a camera they will get excited and ask you to take their photo. This happened to me in Bolivia. The adults did not want to be photographed, but the children loved it. 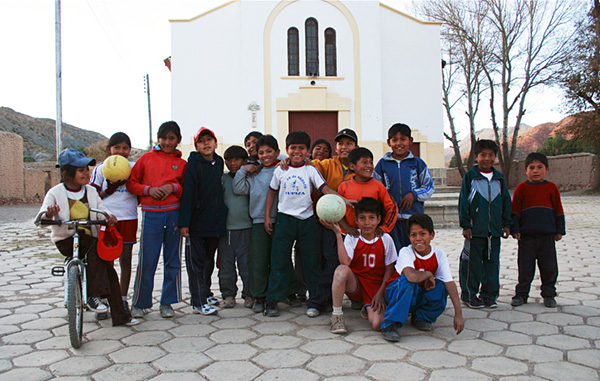 These kids were playing football in front of a church in Bolivia. When they saw me with my camera they stopped their game, came over to me and asked me to take their photo.

The miner is close to the camera, but because I used a wide angle lens his background is also included.

The opposite approach is to use a telephoto lens to crop out most of the background, leaving just a few clues to give information about the subject. This technique works well if you can find the right balance between blurring the background and showing enough detail to show the viewer the subject's environment. This is a very cinematic technique. 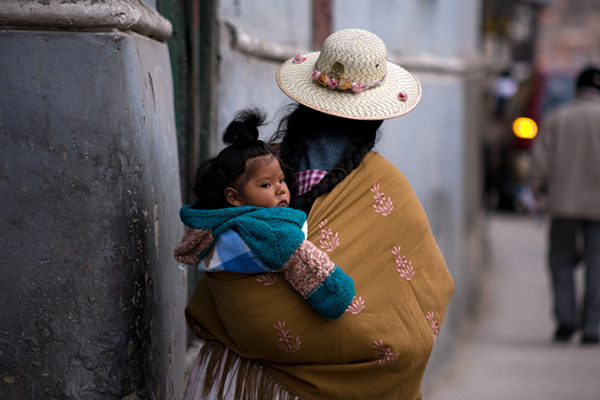 A telephoto lens crops in tight on the woman and her baby, but still includes enough of the surroundings to show them in their environment.

Black and White vs. Colour

Some documentary photographers shoot in black and white because it gives a timeless, evocative feel to their photos. The photos could have been taken a hundred years ago. Colour is a distraction, without it the viewer has to concentrate more on the content.

But sometimes, colour is an important part of the photo, especially if people dress in colourful clothes or the background is very colourful. Colour can also be very emotive.

There is plenty of room for both approaches, and these days with digital you can take all your photos in colour and convert some of them to black and white when you get back home. We have the best of both worlds. But your photos will be more powerful if you think about whether you are shooting in black and white or colour at the time you take the photos. If you decide to shoot in colour, you need to think about how to use the colours in the scene. Maybe you will include lots of bright colours, or concentrate on just one colour. 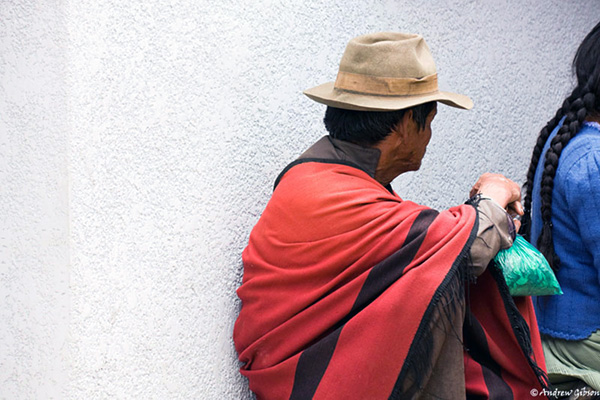 This photo works in colour because the colours are so strong against the white background.

On the other hand if you are shooting in black and white, you need to pay attention to tonal contrast. The colour does not matter, but the lightness and darkness of the tones in the photo do.

I converted this photo to black and white because of the tones in the white trousers and poncho stripes.

To get you inspired, here are links to the work of some photographers that take beautiful and brilliant environmental portraits. Visit their websites and enjoy their work.

Kevin Wang uses Lightroom presets and Canon Picture Styles to create the unique look of his photos. I particularly like the cinematic feel of his movie set. 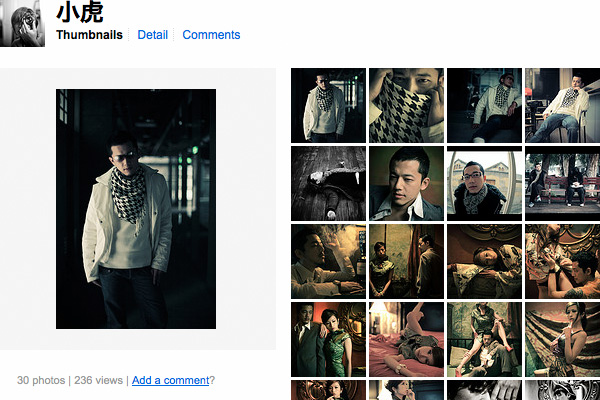 David duChemin describes himself as a humanitarian photographer. Much of his work is for charities. This screenshot is from his Classic India gallery.

Gavin Gough is a travel and stock photographer based in Bangkok. 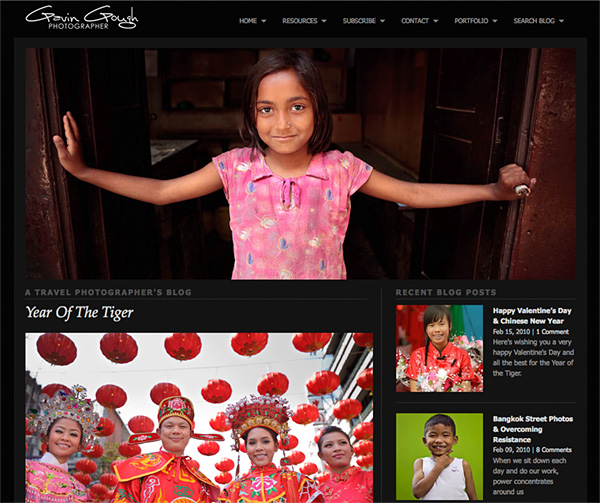 Mitchell is an Australian travel and stock photographer who takes most of his photos in Asia and Europe.