How to Create a Magical Photo Manipulation: The Shoot

Artists often work with a team of individuals to complete a project. This team could include a client, a creative director, an art director, a photographer, a retoucher, and a graphic designer. In this two-part tutorial, I teamed up with illustrator Thiago Storino to create a magical photo illustration that depicts a child interacting with toys that have come to life. In the process, we will show you how to not only shoot the photos that you need, but also, how to retouch them and combine them with stock photos to create artwork that closely resembles a sketch. Let's get started!

Here's a quick look at the final image that we'll be creating. This tutorial will walk you through shooting the original photograph, be sure to check out the next tutorial detailing the post-production work in Photoshop.

The assignment was to create photographic elements for a composite of a child looking at a room full of flying toys. It had two parts. The first was to photograph a child in a room. The image needed to be framed loosely so the designer could add toys later. The second was to shoot toys on a white background in a variety of positions. The white background would help the designer cut out the toys.

The designer's original sketch showed a boy on his bed looking scared as toys flew around him. But before I shot, the concept evolved into a girl on her bed looking happily at the toys. Other than that change, my challenge was to recreate the composition and lighting of the original sketch as closely as possible.

The first decision I had to make was where to photograph. After rejecting my studio for being too “studio-like,” I chose my daughter's bedroom. It looked similar to the sketch and it looked "real." Its two windows would add a natural feel to the shot as long as I balanced my light correctly. At 12x12 feet, it's not a huge room, but I saw that I could get the right angle by putting my tripod low in the doorway and moving the bed. Once it was decluttered, it would work.

My studio strobes would have overwhelmed the space with light, so I went with three Canon speedlites, two 580 EX II's and one 550 EX. My master unit was on my camera and would be my fill flash in addition to triggering the other units. All three were in E-TTL mode and zoomed to 28mm to broaden the beams of light.

My camera was in manual mode. I wanted to control the ambient light exposure and the depth of field.

I'll be honest, I wasn't sure how E-TTL was going to work, but because of the tight quarters, I knew it would be faster to adjust the lights through my master, on-camera speedlite then getting up and adjusting them manually.

The day before the shoot, I tested my lights and setup. I wanted everything to be nailed down so that when the model came in, I could get right to work. The stand-in for the model was a three-foot tall doll that I've had ever since I was five-years-old. I use this doll all the time to test my lights. She stays still and doesn't complain. And I don't need to pay her!

Every time I light something I ask myself, "What is the message of the light? Is it happy? Sad? Thoughtful?" The answer will determine how I set my lights. If shadow and highlight are within a stop or two, the lighting looks happier than if the difference is greater. If the edge of the shadow is hard, it can also send a message of drama or intensity.

It was all about the excitement of seeing toys fly. The quality of the light needed to be light and soft with no heavy shadows, hard edges or high contrast. I wanted the highlights to be about one stop brighter than the shadows.

In analyzing the designer's sketch, I felt it represented a classic three-light setup of key, fill and background lights.

I put the key or main light on a bookshelf in front of and slightly behind the subject. This position wrapped the shadow on the side of the doll's face closest to me. This is called short lighting and is a beautiful light for portraiture. The highlight on her arms, face and hands gave depth to her form, but also separated her from the background.

I wanted to make the light soft. The bigger the light source relative to the subject, the softer the light. I bounced the flash off the ceiling to further increase the size of the light source. Another benefit was that the light now came from above and I knew that I would probably have my model looking up in the final shots.

My on-camera flash filled the shadows of the scene. I had it pointed toward the white, open door to my right. I hadn't planned on using the door as a reflector, but I'm a firm believer in keeping it simple and taking advantage of the opportunities of the location. Why bring in a bounce card or reflector when the door was perfect?

I placed my background light by the window just out of frame, zoomed it to 50mm and pointed it toward the doll's back. I aimed the light by standing behind it and lining it up with the doll. My goal for this flash was to replicate window light and give a bit of separation between my subject and the background.

With the lights in place, it was time to choose my exposure settings.

Balancing the Ambient and Artificial Light

I wanted to keep detail in the vegetation outside the window and let some light into the room to soften the shadows caused by my flashes. This makes the photo look more natural and not “flashed.” By taking a few quick shots, I decided that 1/125th was the sweet spot.

At the same time, I knew I needed a depth of field that would keep my model in focus with the rest of the room slightly out. This would make the designer's life easier when putting in the toys. I chose an aperture of f/8. Now I was ready to adjust the output of the speedlites.

A Little Background About Triggering Slaves

The Canon speedlites I used had optical receivers that were triggered by a short burst of infrared light from the master unit. I knew this would work because the room was dark and small enough that the burst could be seen by the other two flashes.

Outside, the range is about 1/3 less and it is important that the optical receiver is pointing toward the master unit. When I shoot outside or in large events like a wedding reception, I use a radio triggered system made by Pocket Wizard or the Canon’s 600EX-RT speedlites.

I set my on-camera 580 EX II to E-TTL and enabled the wireless flash. I made sure all the speedlites were on the same channel. Next, I selected the ratio combination of A:B C. This setting linked A, my on-camera flash, with B, my key light. I adjusted C independently of the other two by using E-TTL flash exposure compensation (FEC).

With my doll in place, I took a series of shots adjusting the ratio of A:B. I jotted down the settings as I went to compare them later on the computer. I settled on a 1:2 ratio.

Next I played with the FEC settings on the backlight. Plus 1 was too much, -1 was too little so I went with no, or 0, compensation.

I left everything set up for the next day's shoot.

Before doing any serious shooting, I asked my model to pose in position so I could finesse the lighting. A couple of details immediately jumped out at me.

The backlight needed to be adjusted. It didn't look like light coming in from the window. Because it was pointing directly at her, the shadows were too hard and this clashed with the feel of the lights. I softened it up by adding a Gary Fong lightsphere modifier and pointing it to the ceiling. The modifier kicked in some directional light and increased the size of the source. This resulted in softer light.

Because the key light was coming from the ceiling, it created shadows in my model’s eyes. This often happens when you bounce off the ceiling. I also noticed that I needed a bit more direction to the light, but didn't want to move it. My solution was to put a 12x14 inch piece of foam behind the flash to kick a little more light into her face.

Both of these were subtle changes that made the photo more believable.

On my final test shot, I changed the shutter speed to 1/30th because the morning was cloudy and not sunny like the previous afternoon. As I mentioned, the shutter speed only affects the ambient light in this setup.

Finally, I photographed a gray card to help me if I needed to adjust my white balance in post.

During the shoot, I took almost 100 images of the model looking in different directions, poses and with a variety of expressions. We even changed her clothing and hairstyle to give the designer some options.

By setting up and testing my gear before she arrived on the set, the entire shoot took only 40 minutes including a five-minute break to restyle her hair.

The second part of the assignment was to photograph a variety of toys that the designer could use in the composite. To make it easier for him to drop out the background, I shot them on a white plastic background. I kept the lighting setup the same and photographed each toy in three to four positions to give him flexibility. After all, a toy doesn't just fly around a room in one direction!

Off to the Designer

I'm happy with the result. And glad to know that E-TTL worked in this situation! I'll add it to my bag of lighting tricks for future assignments. The designer has a lot of work ahead of him to place all the toys in the scene.

Be sure to check out the design tutorial to learn how the final composite was made. It turned out great! 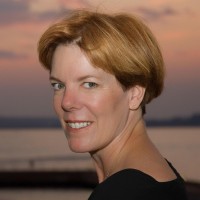 Natalie Fobes
Natalie excels at capturing real people and real life whether it is for a magazine photo editor or a Seattle wedding couple. She knows that those moments of life are the ones that too frequently go unrecorded. Each moment reflects a life. Each photo tells a story.
Weekly email summary