How To Paint with Light in a Landscape

by Andrew Gibson26 Jul 2011
Difficulty:IntermediateLength:MediumLanguages:
LightingFlashlightRemote Shutter Release
This post is part of a series called Landscape Photography.
What Is the Golden Hour?

Painting with light has been covered on many website, but this time I'm going to show you something a little different. I prefer to use a technique to enhance landscapes taken at twilight. The difference is that most of the landscape is lit by ambient light, taking advantage of the beautiful quality of the natural light in the evening. I use light painting to highlight one part of scene.

The above photo is a perfect example – I've painted part of the rock shelf with torch light and the rest of the image is lit by the ambient light.

The benefit of using light painting techniques in the landscape is that it gives you an extra tool that helps you create photos that are different to what other photographers may have taken in the same location.

It can also help when the light conditions are less than ideal. For example, you could go to the beach hoping to take a photo of the sun setting into the sea, only to find that at the end of the day the sun is hidden by cloud and that the light is boring (that's what happened above). If you have the right equipment with you, you can find something in the foreground to paint with light and put some interest back into the image.

There are three ways to paint with light in a landscape: 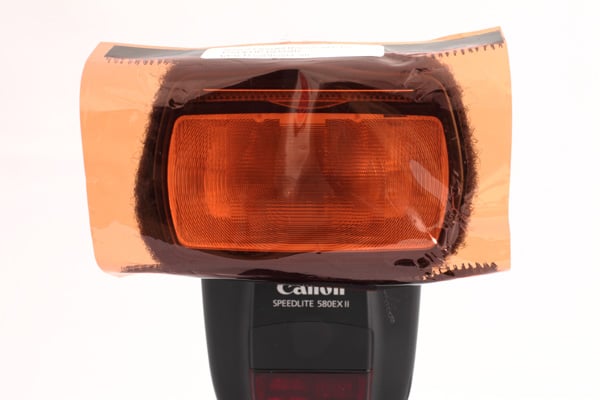 1 - Use a portable flash unit

Light from the flash unit is daylight balanced, which can look unnatural when set against a low-light landscape lit with the warm tones of the setting sun. The solution is to use a CTO (colour temperature orange) gel taped to the front of the flash unit to make the light more orange. This looks much better. You can also use other colours for creative effect. The illustration above shows a Honl CTO gel attached to a Canon 580EX II Speedlite flash unit.

2 - Use a high-powered torch

I have a one million candlelight rechargeable spotlight. These are fairly cheap to buy from hardware stores and are very powerful. Even so, there are times when I find mine underpowered, and would benefit from a five million candlelight spotlight (also readily available at reasonable prices). You will need the more powerful option if you are a far distance from the subject you're painting. 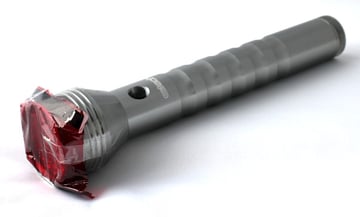 These are not as powerful as the spotlights mentioned above but are useful when the light levels are really low. Like flash units, the light from LED torches is daylight balanced, so you need a coloured gel on the end to colour the light. LED torches only work if you can get really close to the subject.

For all of these techniques, light levels must be low. The basic idea is to set a long shutter speed on the camera (around 30 seconds is ideal) and then use one of the above techniques to paint the subject with light while the shutter is open. Low light levels are essential as they help you get the long exposures required without resorting to neutral density filters.

If you don't have a remote control you can use the ten second self-timer. The ten second delay gives you time to get to wherever you need to be in order to start painting.

It's useful to have someone to help you. For example, I set up a system with my girlfriend where she stood by the camera while I stood in the distance ready to start painting with light. I signaled to her when I was ready and she fired the camera. I started painting and then she signaled again when the thirty second exposure was over. That worked quite well. If I was by myself, I would have had to count the thirty seconds down in my head, and I also would have been worried about leaving the camera unattended.

The Technique for Twilight Shooting

The technique itself is quite simple. Start by setting the camera to expose the background correctly. You're aiming to use a shutter speed of around thirty seconds. This is long enough to give you time to paint with light, but short enough to give you several attempts to get it right.

The light can fade quite quickly this time of day, so you'll probably find yourself playing 'catch-up' with the exposures, and increasing the exposure level each time that you take a photo as the light levels drop. I handle this by setting my camera to manual mode. This makes it easy for me to raise the ISO or open the aperture (keeping depth-of-field considerations in mind as I do so) to get a good exposure using a thirty second shutter speed. 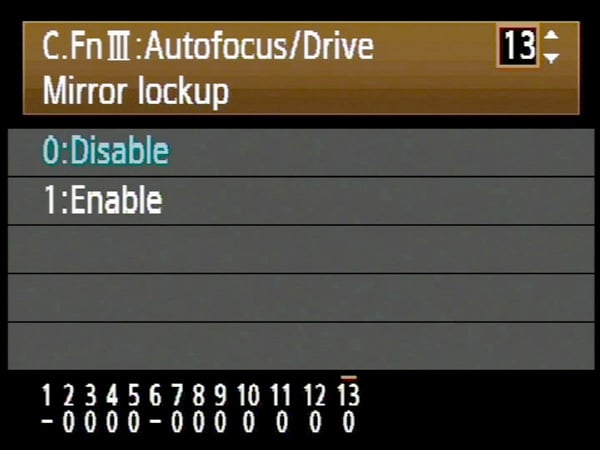 Camera shake can be a problem at long shutter speeds. It's best to shoot in still conditions so that the wind doesn't move the camera during the long exposure. You can also use your camera's mirror lock-up function (if it has one) to help prevent camera shake caused by mirror movement.

Once your camera is ready and you've calculated the correct exposure settings, you can make a test exposure by painting with light while the shutter is open. If you're using a torch, wave it back and forth over the subject, taking care to try and get good coverage. You'll probably have to go over it two or three times – this is quite easy within the thirty second time span.

If you're using a flash unit, set it to manual so that the strength from each burst of flash is the same each time. I have a fairly powerful flash unit (guide number of 58) but I still normally find myself setting the power to 1:1. You may need a lower setting if you're closer to the subject. You can then fire the flash two or three times during the thirty second exposure to light the subject. Take a fresh set of batteries in case you drain the power.

If you have to enter the photo itself to paint with light, wear dark clothing to minimise the chances of being picking up any stray light. Make sure you keep moving – if you stay still long enough you'll register as a ghost-like figure. 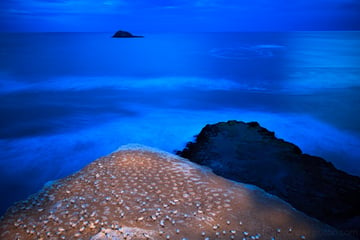 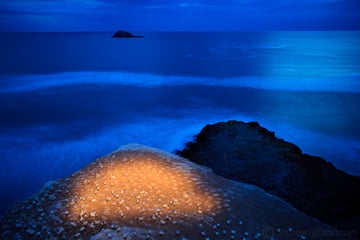 After you've taken the photo, look closely at the result on the camera's screen to see how you did. Most likely, the first try won't turn out so well, but you'll see what you need to do to improve the result. Once you've evaluated the photo, go back and try it again. The above photos are a couple of examples of my first attempts at creating the image at the beginning of this article. You can see how it took me several tries to work out how to cover the rock shelf with light properly.

As well as looking at your results, look at the relationship of the brightness between the background and the subject that you have painted. Can you improve the photo by making the background darker? If so, reduce the exposure by a stop by adjusting the ISO or aperture and make another test exposure to see how it looks.

Keep tweaking and trying different things until you run out of light, and when you get home you can look at the results closely on your computer monitor. It's useful to keep a notebook with you so that you can make notes as you go along to jog your memory as to what you actually did when you see the results at home.

One of my personal dislikes when it comes to painting with light is when people use flash to illuminate the subject but don't compensate for the daylight colour temperature of the flash in any way. White light on the subject at night doesn't look realistic. Instead, why not exploit the principles of colour temperature and colour contrast to make a better photo? 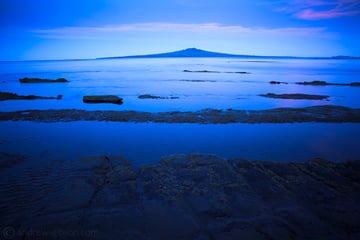 The natural colour of the ambient light at twilight, especially after the sun has set, is blue. If you can light your subject with orange or red coloured light, you have created colour contrast. This strengthens your image.

I have used this principle in all of the images that illustrate this article. You can see it in action in the examples above. I created the top photo using an LED torch fitted with a red gel. Below it is another image taken earlier in the evening, but without any painting with light. You can see the dramatic difference made by adding red light to the foreground. 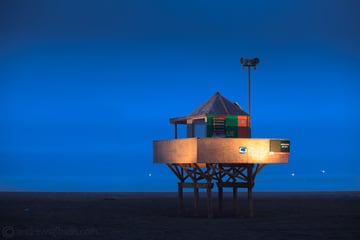 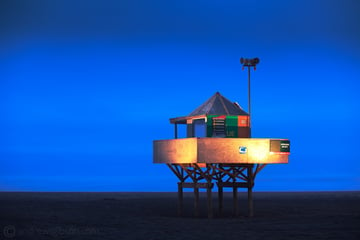 I recommend setting the camera's white balance to daylight and using the Raw format as it makes it easy to adjust the colour temperature of the image at the post-processing stage. You may also have to do some Photoshop work to remove unwanted bits from the photo. In the example above, I fired my flash unit three times during the 30 second exposure to paint the lifeguard's hut. The flash head showed up in the photo each time, and I had to edit it out afterwards. 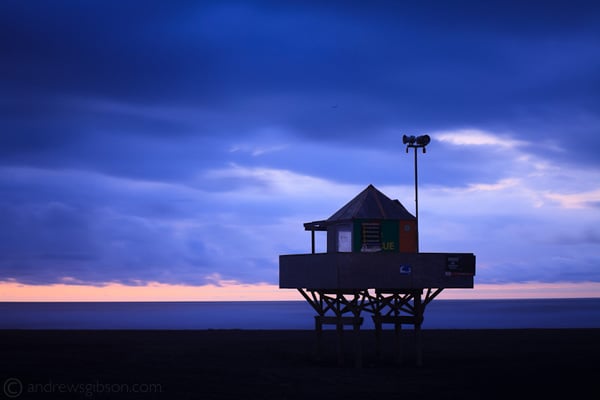 Finally, here's another photo of the same lifeguard hut, taken on another evening (note the difference in the background). I used a one million candlepower spotlight to paint the lifeguard's hut during a 30 second exposure. I think this result looks more natural than using flash.

If you've experimented with light painting, post links to your results in the comments. Also, share any tips or tricks you've learned while trying this technique!