How To Shoot With Fluorescent Tube Lighting

Have you ever noticed how expensive studio lighting can be? A single softbox can cost more than a monthly car payment! For most amateurs and even many professionals, these high prices send them looking for alternatives. One of the popular choices is fluorescent lighting, due to its very low cost and unique shape.

In this tutorial, we'll explore the benefits of shooting with fluorescent tubes and the drawbacks. We'll also set up our own two-light kit and photograph a variety of subjects with it!

Obtaining your fluorescent lighting kit is easy. Head down to the local hardware store and see what they have. You'll need lighting fixtures and the tubes themselves. Look for fixtures called "shop lights." They are usually relatively lightweight and come with some chains or hooks for mounting.

They also come in different lengths. I bought 48 inch fixtures that cost less than $10 USD a piece. But the prices can go much higher. Each of my fixtures hold two bulbs, but like most fixtures, it will operate with only one bulb installed. 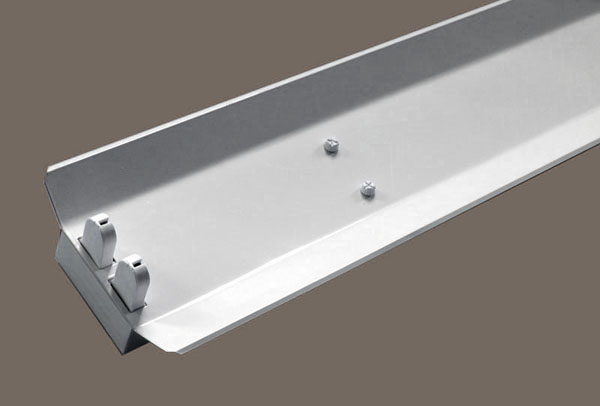 Tubes come in different colors and wattages. Some are called "cool" or "warm" or "daylight," these words reference the color of the light. Warm lights will look more orange, cool lights will look blue. Daylight-balanced lights might actually look white, but they are usually the same color as cool or blue lights.

The wattage of the bulbs will also vary. Get the highest wattage you can afford, and buy in bulk for a better price. I got a 10-pack of 34 watt bulbs for around $12. This brings the total cost of my kit to $32. Be sure to get the proper length and type of bulb for your fixture.

There is one major benefit and one major disadvantage to shooting with fluorescent lighting. On the upside, the long bulb can create very soft light that can resemble what is produced by large softboxes. On the downside, the lights "cycle", meaning they change in brightness and color.

Using a long, slender fluorescent tube gives you a lot of options. You can place the bulb vertically next to a subject, and have light spilling on them from above and below. You can also use them to shoot reflective objects and create long highlights.

The soft quality (soft meaning that the light is diffused or coming from many directions) can't be achieved by a flash because the light is coming from one small point. Studios use large softboxes or big reflective umbrellas to achieve this look. 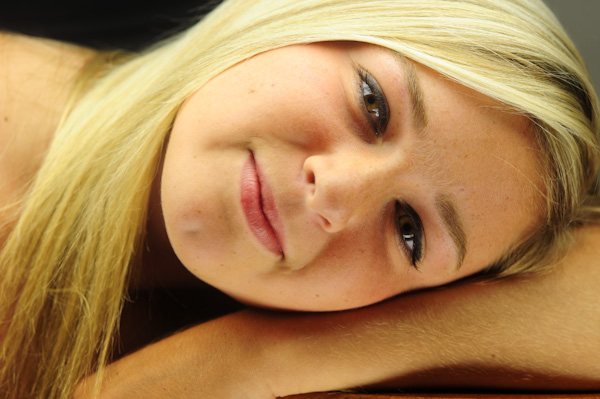 The first thing you should do is plug in your lights and shoot five or six rapid fire frames with your motor drive. You'll notice the cycling right away. Your camera will lock on to an exposure and a white balance (usually at the brighter end of the cycle), and will stay there.

As you flip through your pictures, you'll notice some that are at least a stop and half darker and have a much, much more orange tint to them. Fluorescent lights use what is called a ballast to regulate the flow of current. This system is what causes the cycling.

You can spend big bucks on fixtures with fast-cycling, electronic ballasts that alleviate most of this problem, but that sort of defeats the purpose of fluorescent lights being so affordable. The following images are completely untouched by Photoshop and show the two ends of the cycle.

Cycling does not occur randomly. It happens at a predictable rate. By predictable, I don't mean that you can see it and time your shot, but by using your motor drive for three shots in a row, you should cover the whole cycle.

In my experience, you can also help multiple lights cycle together by plugging them in or turning them on at the same time. Use a power strip, surge protector, or even just an outlet splitter. Reduce everything down to one plug or switch.

The last tip, and I wish I could explain the physics behind this, is letting your lights warm up. Fluorescent lights produce little, if any, heat. I just mean, you should plug your lights in and let them run for several minutes before you start shooting. This seems to even out the cycle a little.

Fluorescent light fixtures are typically built to hang from the ceiling or be screwed into something. So there's really no easy way to get them in exact positions for shooting photos. I own two light stands, which helped a lot. I used metal hooks and the chains that came with the fixtures to shoot most of my photos. But it also might help to have an assistant hold your lights for you.

If you are extra handy, you could mount a light to a piece of wood and perhaps mount some standard brackets, nuts and bolts to that wood. Either way you go, think it through before your first shoot. 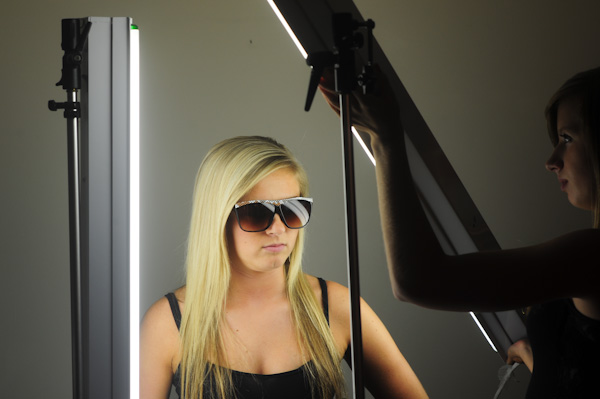 Many fluorescent light fixtures will not have on/off switches. When you unplug them, be VERY careful not to touch the metal prongs of the plug. In my research for this tutorial, I did not see this mentioned anywhere, so this phenomenon may just be a quirk of the light fixtures I purchased.

But it seems to me that fluorescent light fixtures hold a charge for a few seconds after you unplug them. I have been shocked twice during shoots, and while obviously not fatal, it sure didn't feel good!

The last tip I feel people need to know about shooting with fluorescent lights is that they produce little if any magenta light. As you probably learned in grade school, what we see as white light is actually made up of all the colors of the rainbow.

We typically see fluorescent light as close to white, but it's actually lacking the color magenta. This can make toning photos a little tricky sometimes. It's usually not a serious issue, but it's something to be aware of.

This is less of an actual shot I would take for an advertising campaign and more of an example of magic, shadow-filling properties of fluorescent tubes. For this shot, I chose something with as many weird angles as I could find. Then I set out to photograph it with very few shadows.

There are many times that situations call for even, soft lighting to show all the details of a product. And it was pretty easy to achieve this with the fluorescent tubes.

For this shot, I simply set up the weight on a neutral-colored platform with a neutral-colored background. I then put one of my fluorescent fixtures on one side running vertically, and then my second fixture on the other side. If you were looking down at set-up and the weight was the middle of a clock, the lights would be at 4 o'clock and 8 o'clock. 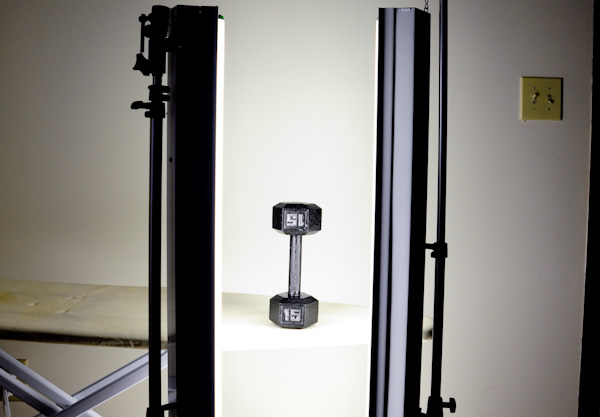 I suppose you could also argue that a car is also product. This shot will show how you can create long highlights on reflective surfaces. The long shape of the fluorescent tube when lighting a long curved edges of a car can really make things pop.

This is my car, and if you spy any dirt on it, don't judge me. Notice how the curves and edges on the front of the car are really emphasized.

For this shot, I suspended one fixture over the hood of the car. The second fixture I placed on the ground right in front of the car. In addition to the two fluorescent fixtures, I decided to add a flash into this shot. It created the rim light on the left side of the car.

Because both of my light stands were being used, I just stuck the flash in a gutter. Lighting does not need to be brain surgery! Also, when shooting outside at night during the summer, be prepared for your fluorescent lights to become an insect utopia. By the end of the shoot, I was having to wait to shoot until the bugs flew out of the frame.

Cycling can really mess with skin tones, so shoot a lot when working with people. Remember what I said about reflections? Well you can see the unique shape that light makes in her eye. 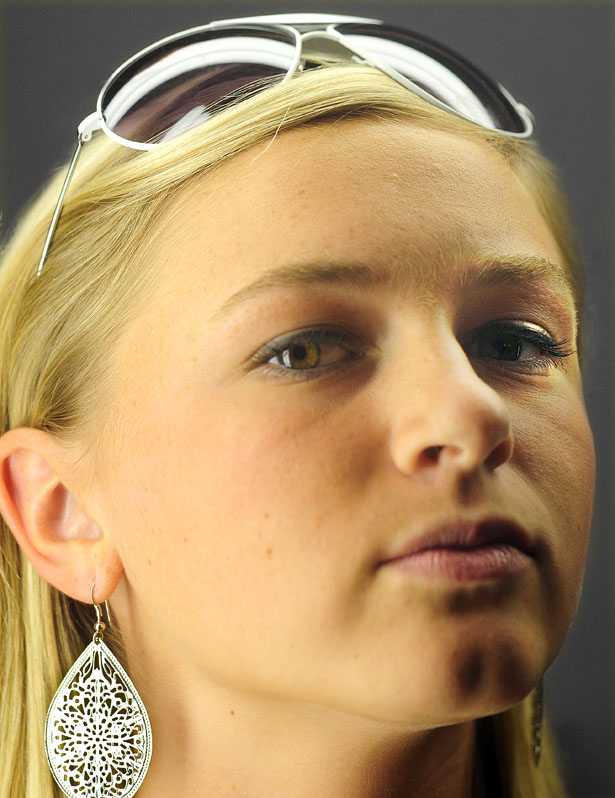 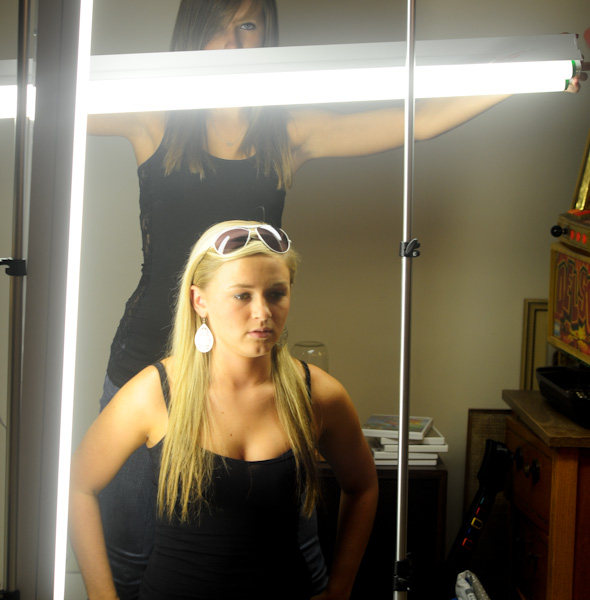 Fluorescent lights are cheap, but tricky to work with. They offer an inexpensive way to create extremely soft light, but also cycle or fade in and out as you're shooting. Use your motor drive to overcome this.

Use fluorescent lights to emphasize anything reflective as well. Plan your shoots early to figure out how you'll mount the lights during the shoot. And do not accidentally touch the metal prongs of the plug while unplugging your lights!

Despite the drawbacks, fluorescent lighting can be a lot of fun and a cheap way to get really creative with your photography.