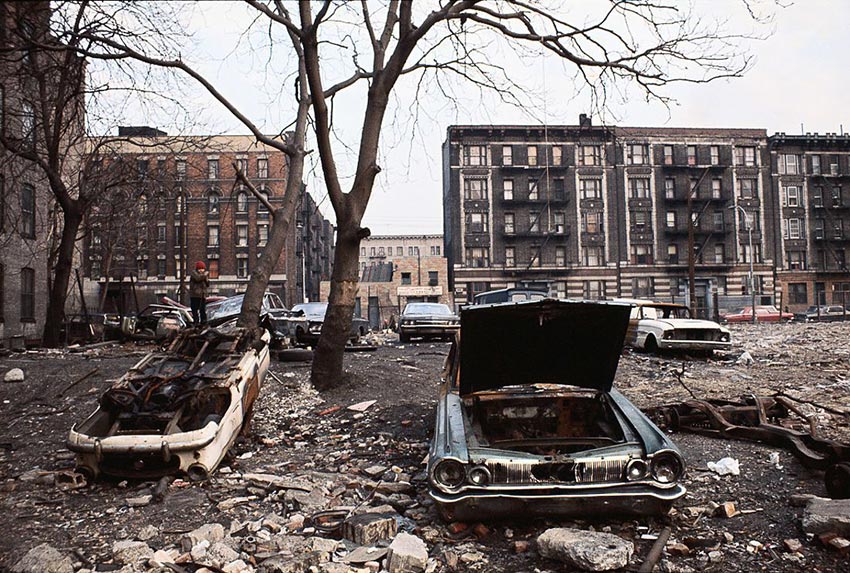 Let's Take a Closer Look at This Image

Like all great photos, there's more hiding beyond first glance. Let's dive in.


In documentary photography, the context of a situation is part what a photograph expresses. Chilean photographer Camilo José Vergara spent the 1970's documenting urban New York.

It was an important transition era for many cities, but especially New York City. New economic patterns—increasing privatization, globalization of capital, and financial deregulation— and large-scale urban development changed the dynamics of daily life, especially in the capital cities and financial capitals like New York. Waves of urbanites moved to the suburbs, leaving left behind unused buildings, overbuilt capacity, underfunded government services, neighborhoods, and people.

Layering to Create a Sense of Atmosphere


So that's the larger context. What about this place, Eagle Avenue at Westchester Avenue in the Bronx? What are we looking at here?

Vergara used a moderate wide-angle lens—maybe a 28mm or 35mm— to create wide, strong lines in foreground: the cars lead your eyes back to the trees. Behind the trees, a second line of cars repeats the pattern, giving us a sense of scale and depth.

Then the buildings rise up, blocking the horizon. This gives a clue to the broader context of where we are (an urban neighborhood), and the age of that neighborhood, without overwhelming us with too much detail.

What's left out of the composition is as important, too: no sidewalk, no sunshine, even the tops of the trees are cropped. It's brown and grey, drab. Heavy.

Layering in a composition is a visual metaphor that often, as in this photo, supports a multi-layered reading.

Look at the photo again. Did you miss the child preparing to swing from the tree on the left side of this frame? I did the first time I looked.

Atop the rusted car at left, someone has found a way to hang a swing from the nearby tree. When I look at this image now, the number one thing I think is: what became of the child on the car? What was their life like?

What about the debris? Did the owners of these cars know they were parking them for the last time? The open hood on the blue car shows a missing engine, so perhaps this was the spare parts yard for an enterprising mechanic. It also makes me wonder where New York's cars go to die these days.

Then I think about Vergara's larger project, documenting the de-urbanization of the city. Looking at the photo now, it's hard to imagine a time when any part of New York City was seen as invaluable, abandoned to rot. And yet, alongside images of great prosperity, pictures of deprivation have always been part of the story of New York.

In any case, this photo leaves me with more questions than answers. The tension of an unresolved mystery is often a good thing in a photograph!

If you're a developing photographer, one of the best things you can do to grow is learn to look beyond the surface of a photograph. Going beyond the superficial will help you identify the things that make you stop and admire it. In time, these reflections will trickle into your own work.

Have you ever wondered how experts look deeper into a photograph? What makes a great photo stand out from the crowd? Dawn Oosterhoof's How to Read a Photograph is an excellent piece that helped me develop an appreciation for digging deeper.

What strikes you about this image of the Bronx? Let me know in the comments below.

Andrew Childress
I enjoy writing about productivity software that helps people do what they love, faster. Get in touch at andrewchildress.com .
Weekly email summary
Subscribe below and we’ll send you a weekly email summary of all new Photo & Video tutorials. Never miss out on learning about the next big thing.
Advertisement
Translations