Master the Art of Photographic Composition

Andrew Gibson Sep 12, 2012
Read Time: 8 mins
Composition
This post is part of a series called Composition.
Composition Masterclass: How to Get Perfect Perspective

One of the first composition rules we learn in photography is the rule-of-thirds. But once you've understood this concept, what else can you do to improve the composition of your photos? It will get you started, but there's more to composition than where you place your subject in the frame.

Today we'll be exploring a few more aspects of photographic composition, to ensure you're completely clued up on how to take brilliant shots!

I've never liked the term 'rule-of-thirds'. 'Guideline-of-thirds' is more accurate, but less catchy. Why guideline? Because sometimes the most effective composition places the subject in the centre of the frame. Or at the edge. The moment you start thinking of composition in terms of rules, you're making photos according to a formula. You're at risk of working with your head and not your heart (ideally, the two should work together).

I placed main subject in this photo, the rock, at the edge of the frame, in the centre, because of its relationship to the reflection of the cloud. The composition is about the balance between the white clouds and the dark rock. This scene would have been nearly impossible to compose according to the rule-of-thirds, and the final image wouldn't have been so effective.

In this spirit, here are seven guidelines for improving your composition. Think of them as signposts on the route to becoming an accomplished photographer. They'll help you get there, but you have the freedom to wander off by yourself at any time.

Here's a challenge for you. For each point in this article, set yourself a goal of putting it into practice. Go out and take some photos. The information will become much more valuable, you'll learn a lot about composition, and your photos will be better. 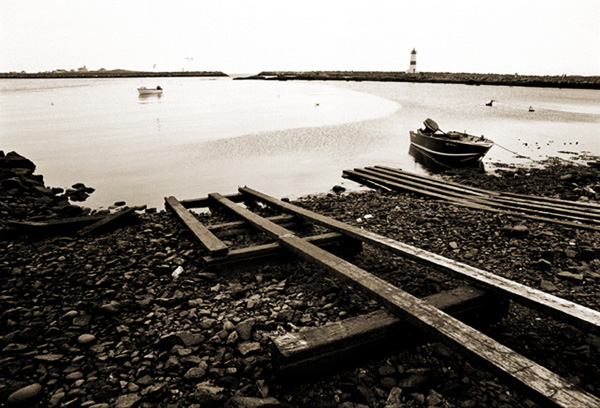 The lines created by the boat ramp in this photo lead the eye from the edge of the frame to the centre. The eye follows the route a boat would take from the land to the sea. 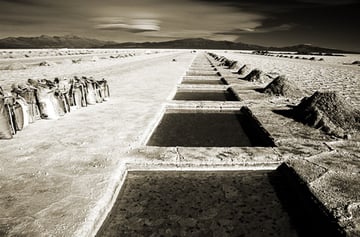 The converging lines in this photo are very powerful, leading the eye from the foreground to the horizon. It's a very dynamic composition. Diagonal lines add a sense of movement to a photo, and help you create a photo with impact.

Don't neglect the foreground in your photos. Make the foreground work for you. How do you do this? The best way is to make sure that there is something interesting to look at. The tricky part is finding something that's interesting, but doesn't compete with or distract attention from your main subject.

Your subject is the visual centre of your photo (it may not be positioned physically in the centre of the photo, but it's the most important part of it). The elements around your subject, such as the foreground, should play a supporting role.

This photo is a good example, I included the railway platform in the photo because I liked its texture and it helps set the scene for the train. 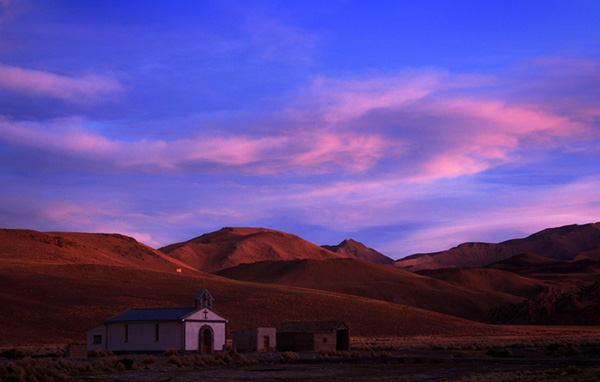 What if you can't find something interesting to put in the foreground? Then just leave it out. That's what I did here. The interesting elements are the sky, the mountains and the church. The foreground was boring, so I left it out. 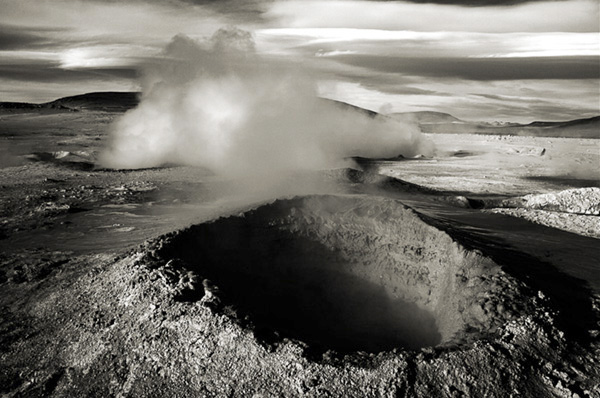 What type of lens is best for the photo? There are three basic choices: wide angle, standard and telephoto. Each has its own unique characteristics. 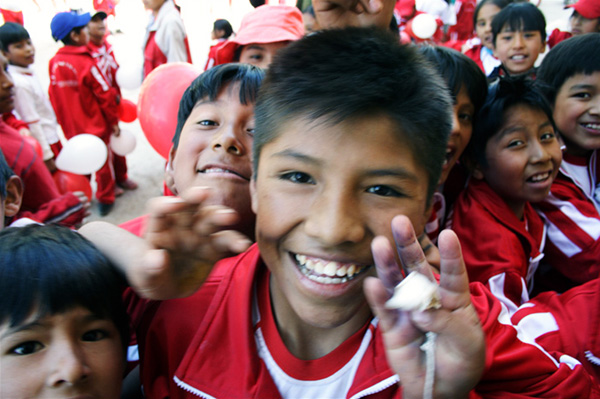 Another approach is to use a telephoto lens to pick out the subject against the background. You can do this by using a wide aperture to create a photo with little depth of field. Or you can isolate your subject from its environment, as in this photo of two Bolivian girls. This photo is very different from the one above it, and the main reason is because it was taken with a telephoto lens, not a wide angle.

If you don't own a wide angle or telephoto lens, you can still practise this by using the opposite ends of a zoom lens (for instance at 18mm and 55mm on an 18-55 mm zoom). These focal lengths are easily good enough to start off with.

Negative space is the area around your subject. If this area is empty, like in the photo of the shell below, it's called negative space because there's very little in it. Negative space gives the subject room to breathe. It can also convey a sense of the subject's environment. 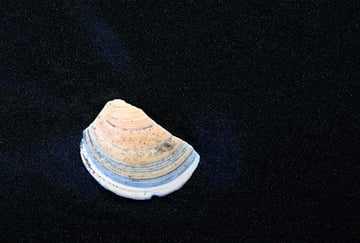 Magnum photojournalist Robert Capa is commonly quoted as saying that if your photos aren't good enough, then you're not close enough. Lots of articles encourage you to get closer to your subject (and this is a good thing, as even accomplished photographers sometimes forget to get close enough). But sometimes you can make a beautiful photograph by drawing back and include some negative space around your subject.

Look for interesting shapes and patterns. They can be patterns in nature for example, or the shapes of buildings against a clear sky. Once you've found something interesting, get in close and concentrate on the shape or pattern that caught your eye. 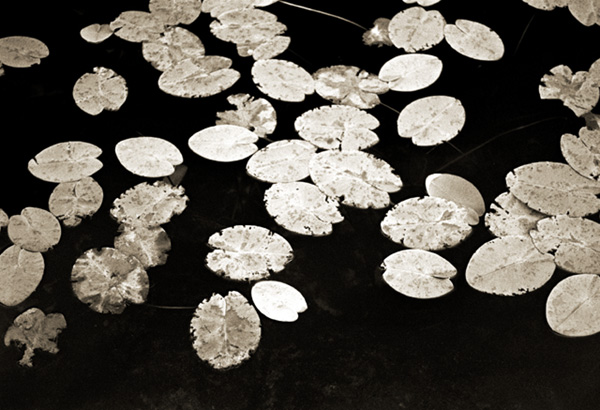 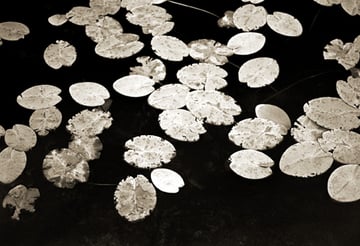 This photo of lily pads is composed of a series of circular shapes. I got in close and used a polarising filter to eliminate the reflections on the water. It looked good in colour, and great in black and white. The black and white version works for me because colour distracts attention from the pattern formed by the repetitive shapes of the lily pads.

Contrast is an important compositional element. There are contrasts all around you. Once you become aware of how effective contrast is in your photos you can deliberately seek it out. Some types of contrast that work well in photos are the contrasts between old and new, light and dark, rough and smooth, solid and blurred or warm and cold. 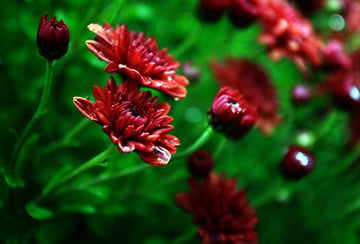 These flowers are a good example of colour contrast. The dark red flowers contrast against the green background. The colours are also complementary, which means they work well together. Some colours clash (for instance red and blue) which is another type of contrast you can also use to good effect.

There is a contrast here between the old, run-down wooden shed and the beauty of its surroundings. The photo was taken in a remote part of southern Chile where the people live in houses made out of tin or wood (this may not even be a shed - I wouldn't be surprised if someone was living there). They don't have much money, but are surrounded by the harsh beauty of the Chilean Andes. 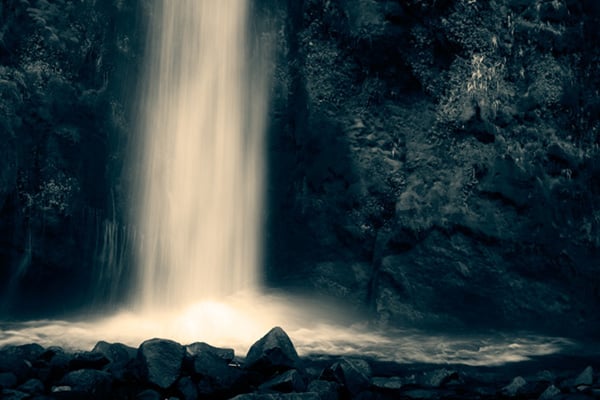 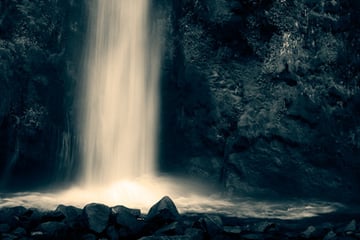 There are two types of contrast in this photo. The first is the contrast between the white water and the dark rocks. This is called tonal contrast. Tonal contrast is essential for black and white photos and is also very effective in colour. The second type of contrast is between the stones and the water. The water is soft and blurred, and the rocks are hard and sharp. I created this effect by placing the camera on a tripod and using a slow shutter speed to blur the motion of the water.

Now it's time to put all these guidelines together. If there's one overriding principle that will guide you well it's this - keep it simple. Decide what the most important elements of the photo are, and eliminate anything that doesn't contribute. Every part of your photo should be earning its keep. If it's not needed, leave it out. Your compositions will become simpler, bolder and more effective. Your photos will have more impact and your message will be communicated to the viewer with clarity. 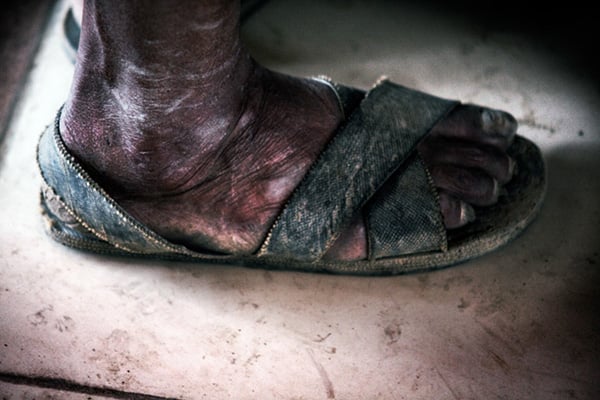 I took this photo in Bolivia. We were in a remote village and the local people wear sandals made from tyre rubber. I wanted to make a photo of this and used a telephoto lens to close in on this man's foot. The photo is about the foot and the man's sandal - and nothing else.

This photo of a standing stone is another good example of simplicity. I wanted to capture the stone's unusual shape. The photo also has tonal contrast, between the light stone and dark background. There's also a contrast between solidity of the stone, erected by man, and its natural surroundings.

If you take one thing away from this article, remember that composition means so much more than a basic "thirds" grid. Appreciating the theory of what makes a good image is incredibly important, and will serve you well in countless different situations.

If you have any of your own composition tips, I'd love to hear them in the comments!

Andrew Gibson
Andrew S Gibson is a freelance author who writes about the technical and creative aspects of photography for book publishers, magazines and websites. Sign up to his newsletter to receive a complementary copy of his ebook The Creative Image.
Scroll to top
Looking for something to help kick start your next project?
Envato Market has a range of items for sale to help get you started.