In several previous articles, we've discussed how to interpret the histogram on your camera. While shooting, you can use this handy tool to check your highlights and shadows to make sure there isn't an unacceptable amount of clipping. Unfortunately, if you spot a problem in-camera, the best you can do is adapt your settings and improve future shots.

Today we're going to apply these same principles to post-processing in Lightroom 3. Here, the histogram is not only an indicator of the current state of the shot, but a tool that you can use to actually improve the photo.

Note: Although we're using Lightroom for this example, the techniques and principles apply to any photo editing program.

What is the Histogram?

If you're unsure about what we're even talking about, launch Lightroom, select a photo and go to the Develop Module. In the top right of this screen you should see a colorful graph that seems like it would surely be too complex to be useful. 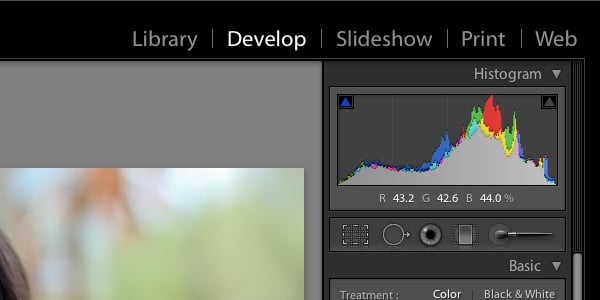 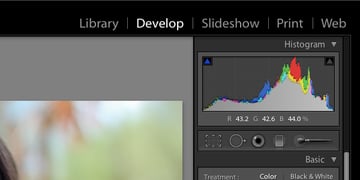 However, the histogram is actually quite simple to use on a basic level. You can learn the general concepts in only a few minutes and will absolutely be able to apply them and immediately change the way you analyze a photo.

Why Worry About the Histogram?

If you're new to the concept of a histogram, you might be wondering why you should pay any attention to it at all. In the past you've edited your photos just fine while ignoring that confusing graph in the corner - so why bother?

The answer for me mostly lies in having client photos printed. Editing photos for screen and for print are unfortunately two completely different tasks. When you're editing photos for the web, you'll be dealing with tons of different possible monitor calibrations, color settings and overall quality.

One thing that I run into constantly is that photos that look amazing on my beautiful Apple cinema display can often look quite dark on a $300 Dell laptop. The best thing you can do in this situation is to experiment until you get a general feel for how your photos will feel on a hypothetical "typical" monitor with default settings (though understanding the histogram will help with this immensely).

However, just because a photo looks good on your computer screen doesn't mean that it will look good when it goes to the printer. Obviously, working with your photo printer and calibrating your monitor according to their suggestions are important steps, but the histogram can also be an invaluable tool for getting your highlights, shadows, contrast and overall brightness print-ready.

What Does It Mean?

At this point you might be looking at that histogram rainbow and asking "what does it mean"? As I mentioned above, though it looks complicated, you really don't have to learn much to use it effectively.

To understand what the histogram is telling us, let's take a look at a modified version of the shot we saw above. 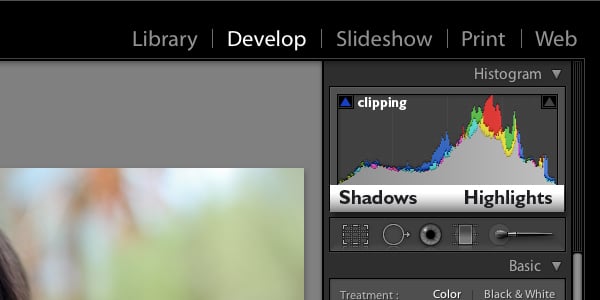 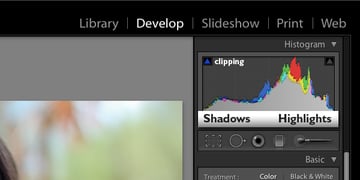 In the image above, we can see that most of the pixels in the image are piled up on the right side of the graph. Without even seeing the photo we know this is going to be a bright image, while not being too blown out.

The most important thing to pay attention to with the Lightroom histogram, just as with your camera, is clipping. Clipping occurs when there is detail that is being lost as a result of blown out highlights or overly dark shadows. You can identify clipping in the histogram by looking at the left and right edges of the graph. If the data is bleeding off the edge of the graph, clipping is occurring. 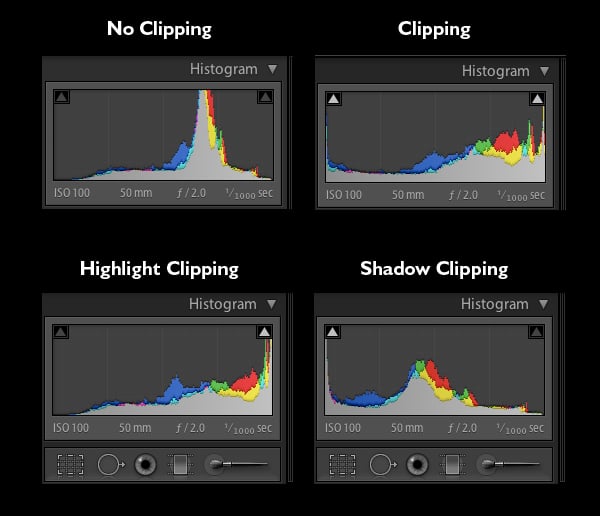 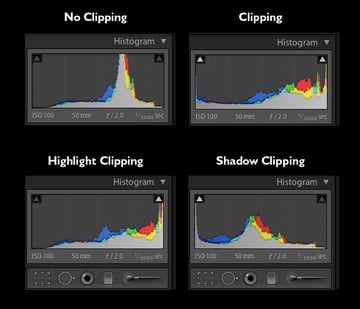 In the image above you can see four different scenarios. The top left histogram indicates that the current image has no detail that is being lost from shadows that are too dark or highlights that are too bright (though there is very little contrast, which we'll discuss later).

The top right histogram is telling us that there is both highlight and shadow clipping, and the next two graphs show you the difference between the two forms.

Back to our point about printing, we can bet that two out of three of these histograms will yield some pretty poor quality prints regardless of what we're seeing on-screen. However, keep in mind that some clipping is perfectly acceptable and often desired. The trick is to find out where the clipping is occurring and deciding whether a loss of detail in that area is acceptable or not.

Identifying Clipped Portions of an Image

For the most part, you'll discover that working with the histogram involves making small adjustments. However, for the purposes of this tutorial we really want to see the effects taking place so we'll have to use some extreme examples. Consider the image below: 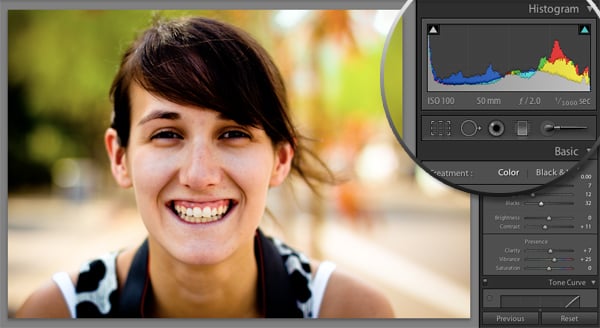 We can see just by looking at the image that the shadows have some problems and the histogram confirms our conclusion. Notice that the little arrows at the top of the histogram light up to indicate that clipping is occurring. 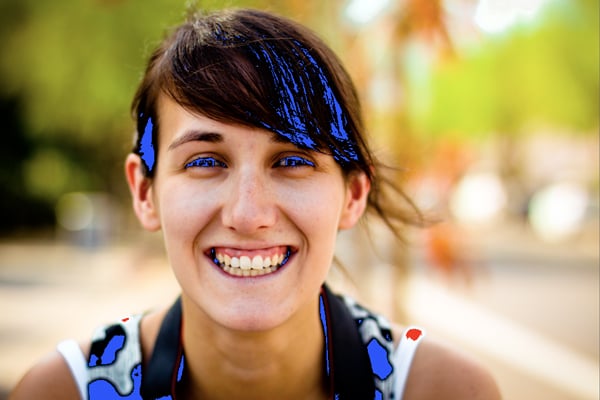 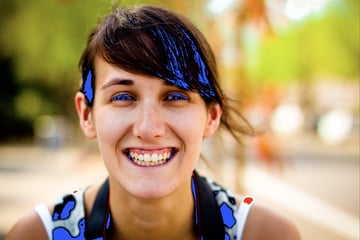 As you can see, there are only a few small portions of the image where the highlights are being blown out. These could definitely be toned down a bit, but they're nothing compared to our shadow clipping problem, which is fairly widespread.

Repairing Clipped Portions of an Image

If you hover over the histogram you will see that as you move your mouse, different portions of the graph are highlighted. This is because there are four sections of the graph that correspond to four controls inside of Lightroom. This is illustrated in the image below. 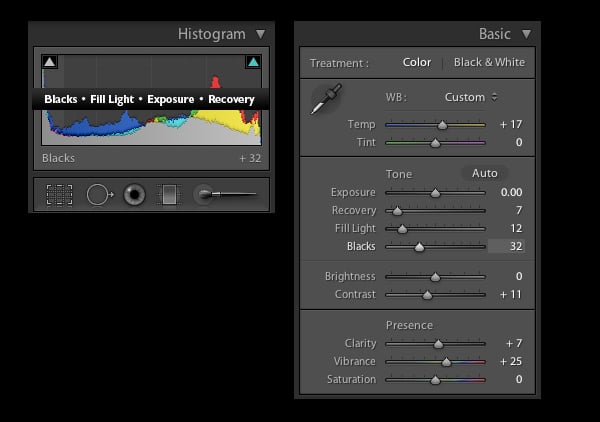 In the "Basic" section of the Develop Module, you'll find the four controls indicated in the image above: Blacks, Fill Light, Exposure and Recovery. You can change these values in two ways: the first is to interact directly with the graph by clicking and dragging certain portions to the left or right. The second is to use the actual controls in the Basic section. I find that it's a little less awkward to use the actual controls to tweak the settings.

Basically all you have to do is tweak each of these settings individually until you like both the shape of the graph and the appearance of the actual image. 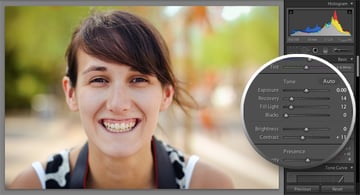 Again, remember that in real-world situations, you'll likely be making much finer adjustments. You'll find yourself pulling in just a bit more hair detail or toning down that fill light by only a few points.

Though the core use of the histogram for me is to identify areas that are clipping, you can actually use it for a lot more. Another way that I frequently use the histogram is to analyze the contrast of an image.

If you think about what the data on the graph represents, then you can see that a histogram showing all the pixels piled up at a single area of the graph contains a fairly low amount of contrast.

Using this line of thought, you can look at the histogram and decide whether or not to add more contrast to the image. Consider the two examples below. As you can see, the histogram in the first image shows very little contrast whereas the second image shows quite a lot of contrast by comparison. 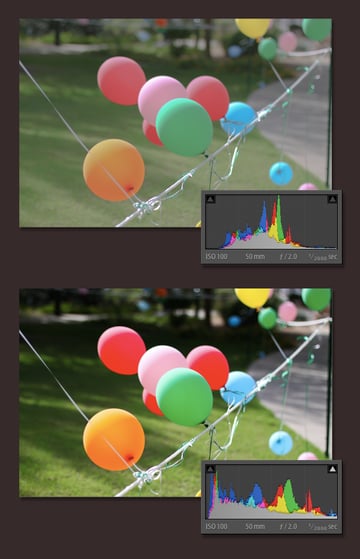 You can apply contrast by simply upping the contrast setting in the Basic section. Another technique that I frequently use on an image with poor contrast is to look at my highlights and shadows and push them further towards the edges of the graph.

To make a really bold-looking image, I like to push these right up to the edge either just before or even occasionally just after they start clipping as you can see in the example above.

To sum up, the histogram in Lightroom is related to that on your camera, but is in fact a much more robust tool for improving the quality of an image. You can use the histogram to identify clipped areas of detail in an image or an overall problem with contrast and use the controls inside of Lightroom to solve the problems so that your photos will look great when it comes time to ship them off to the printer.

Leave a comment below and let us know if you use the histogram to improve your images. Be sure to tell us about what you look for in a "good" histogram and any techniques you have for getting it to that point.