I was recently charged with obtaining photos for an editorial about Mardi Gras food. The turn-around was relatively quick, and required me to visit a variety of restaurants and bakeries to get the desired product. In today's tutorial, we'll take a look at the approach and the result of this guerrilla food shoot.

The most important thing to remember about shooting food for a relative small editorial publication is that there's no money or time for studio work and food stylists. For pastries, I was able to bring them back to the office and shoot. For everything else, I shot at the restaurant.

Because of the short notice and the extremely busy schedules of restaurant owners, I usually show up unannounced at a time when the restaurant is open, but not incredibly busy. I know that this isn't the most polite approach, but trying to work out everyone's schedule can turn out to be a nightmare.

All the restaurant owners were happy to help, and if I did show up at a busy time, I was always quick to offer to come back later.

I was forced to work quickly for two reasons. First, what I was working with was prepared and plated food. In most cases, that means it's hot. As food cools and things melt, run or solidify, the appearance of a dish can drastically change.

Secondly, I didn't want to take up space in the restaurants for more than 15 minutes. These are places of business and an unused table means a loss of money.

For these reasons, I packed very light. My camera set-up was simple. I carried my full-frame DSLR with three lenses. I had a 24mm, a 50mm and a 70-210mm. The 24mm and the 50mm share the same filter size, so I carry a set of macro filters that can be used on either of these lenses.

For lighting, I carried two hotshoe flashes. I'm able to fire them both remotely using a cord to one flash and a slave on the other. I prefer this "old school" method for situation like this because it's more reliable. Carrying my wireless transmitters means there's an entirely different set of batteries that might fail me.

I also carried one lightstand with one silver umbrella. A flash paired with these items was my primary light source. The second flash was only used in very tricky situations. I occasionally used it as fill light, in which case I bounced off the ceiling or a wall. I also rarely used it as an accent light, and those times it was used bare.

Waffles are a relatively easy food to shoot. You'll see as we move along that the pleasing texture and dry surface of waffles make it uncomplicated. For this image, I used one light. For all of these shoots, I'll be describing the position of the lights using a clock. For all these example, the center of the clock is the subject and the camera is 6 o'clock. Here I positioned the light at 9 o'clock. The height of the center of the umbrella was about eight inches higher than the plate, and about as close to the food as I could get it.

When shooting food, many beginners go straight for the overhead angle. Even with proper lighting, this is a bad choice for most food. The food looks extremely flat. This is a test shot from my waffle shoot and though it looks alright, I knew I could do better.

Many foods sit up of the plate. They have some height to them. In these cases, I usually choose an eye-level approach. It makes the lighting more dynamic and makes for better shots.

In the following image, you can see all the elements of the dish. The low angle of the light give contrast the square pattern of the waffle. You can also see the height of the whipped cream and the actual thickness of the waffles. Both of these were not as evident in the first image. 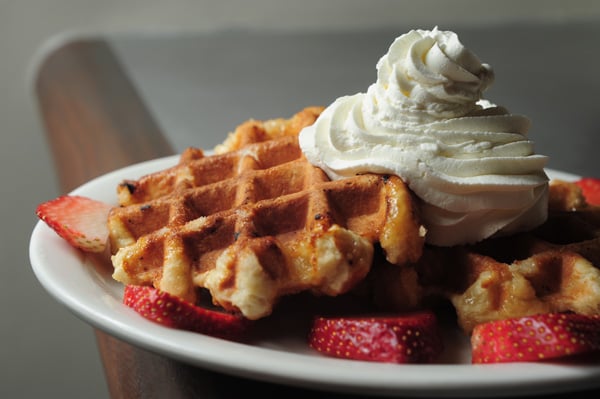 Beignets are small, fried, donut-like pastries. After frying, the pastries are put into a paper bag which has a generous amount of sugar and cinnamon in it. The bag is closed and shaken, which applies an even coat on each piece.

With this tradition, I wanted to really feature the presentation. I thought the bag, open and rolled back with the beignets spilling out would look good. This was more challenging than I thought it would be. 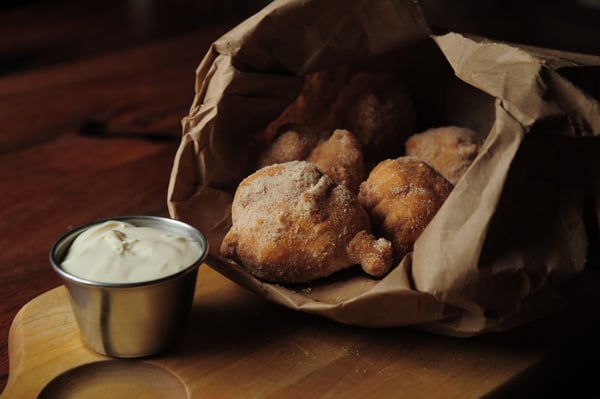 The previous photo was one of my early tries. There are several things wrong with this image. First, the big empty part of the bag just creates a big dead space in the image. I also thought there was just too much brown in the image. The main light was positioned well, but I was just not too excited about it.

To make the photo better, I reposition the camera and sacrificed the top of the bag. I initially wanted to make sure people knew what they were looking at, but it was causing too many problem. Next, I moved the beignets themselves to give the image more depth. I also found a white paper with the restaurants logo on it. It gave me a little color to liven up the image.

Finally, I positioned a flash directly behind the bag so the black area in there would have some detail and lend shape to the forms in the back. I kept the flash on a very low power and was careful about positioning it. If it was too bright or overpowering, it would look really unnatural. 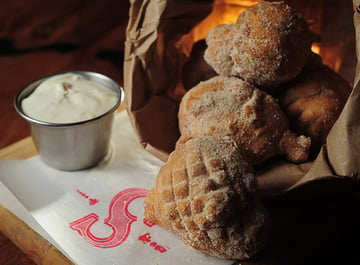 Since I explain what beignets are for people, I should probably explain what a po' boy is, too. A po' boy is a sandwich which is served on a roll. The filling is usually a type of breaded and deep-fried seafood. Catfish, shrimp and oyster po' boys are common. Po' is short for "poor."

Because I was working quickly, I usually ordered the food and then got set up while it was being made. Your hand can be the perfect stand-in model. You can shape it to whatever you want to shoot. 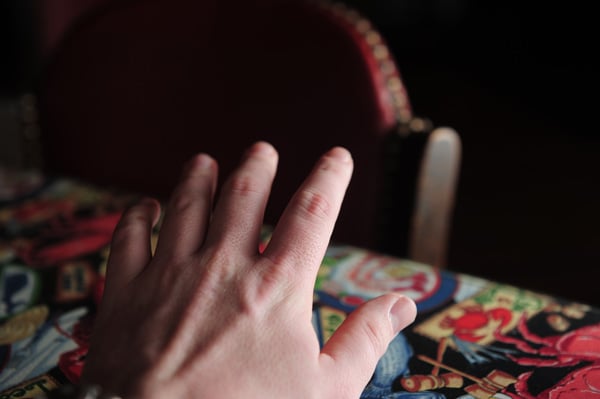 In this test shot, you can see a couple things I was dealing with. Whenever possible, I like to include some contributing background in my photos. The table cloths in this restaurant were pretty busy. They're fun, but they would be a lot to take in when looking at a photo.

On the bright side, the red leather chairs with the studding on them are pretty interesting. You don't see chairs like them very often. At this point, I decided to include the chair, but try very hard to eliminate the table cloth. 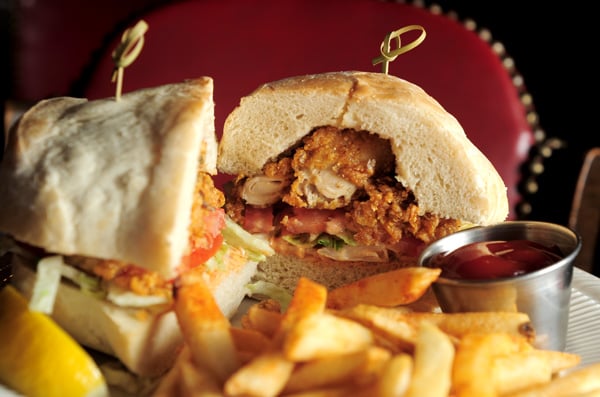 So here's what I came up with. The plate has pretty standard lighting: one light with the umbrella at 3 o'clock. There are two halves to this sandwich, but it's always best to have one strong subject. To achieve this, I put one half in profile, so you know it's there, but the center of the other half is the strong point of interest.

King Cake is a New Orleans tradition leading up to Fat Tuesday. It's always colorful and tasty. It's ring shape makes composition hard, but it's usually decorated, so that adds a little pop.

For these images, I was using a small white backdrop in a controlled space back at the office. I lit this one a little differently. First, I established a strong backlighting. I did this by bouncing one of my flashes against the white backdrop. As you can see, this almost works by itself. The lighting is just to inconsistent across the frame, and all the shadows are a little too deep. This was my initial test image with the one backlight. 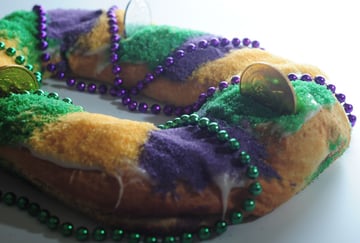 For the final image, I added another flash in an umbrella as a fill light. This was positioned at 5 o'clock. In following image, you'll see that I used a longer lens and changed angle a little bit. This made it easier to make sure I was focusing on a area with consistent light. It also tightened up the composition a little bit, which I like. 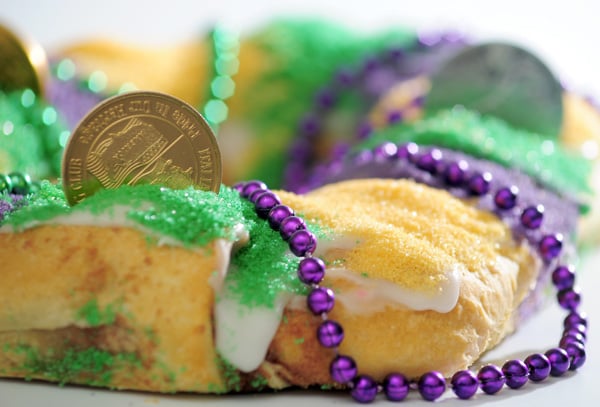 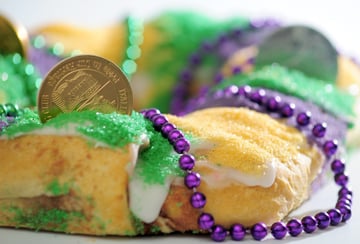 It was a bit of a run-and-gun day for me. Doing four shoots along with my other duties is about all that time will allow. But like a wiser and older photographer once told me, "the worst day taking photos is better than the best day stuck behind a desk." If you have any delicious food photos you've taken or been inspired by, feel free to post them in the comments!