Power Up Your Photography with Photoshop CS5

New Photoshop releases get a lot of attention from the designer crowd, but as a photographer you can get equally excited about all the fantastic new toys Adobe has cooked up to improve your workflow. Photoshop CS5 is one of the most significant releases we've seen in several revisions, so if you're still on CS2 or 3 and have been waiting for a good time to upgrade, this just may be it!

Below we'll take a look at how to use a number of the new features in CS5 that apply to your work as a photographer. Whether you're replacing pixels, fixing lens distortion or creating fantastic high dynamic range images, these new goodies are more than enough to have you cursing Adobe for making you want to buy yet another Creative Suite.

It happens all the time. You're shooting what will be some of the best photos of the day and some guy walks by and ruins the shot. Or perhaps your photo of an old country town is ruined by the presence of a brand new BMW. Regardless of the circumstances, sometimes, you find reasons to cheat.

By "cheat" I mean you use Photoshop to significantly alter the composition of a photo. Not mere color adjustment, but full on removal of objects to make it look like your shot is better than it was. This is particularly acceptable in commercial advertising photography where the integrity of the work isn't as important as actually conveying the correct message to consumers.

Cloning in Photoshop has always been much more of an art than a science. You have to go at it slowly and carefully work to remove portions of the image by replacing them with duplicated pixels in such a way that it doesn't actually look like you're duplicating pixels.

No matter which of the older tools you use, it can take quite a while to clone out large portions of an image. This is where Content-Aware Fill comes in. Using Content-Aware Fill you can simply select the portion of the image you want to leave out and Photoshop will do it's best to remove it.

See It in Action

I have to say, this tool feels down right magical at times and can literally save you hours of work on large projects. Let's take a look at a real example to see how this works. We'll use this photo of a plane by photographer Luis Argerich as our sample project. 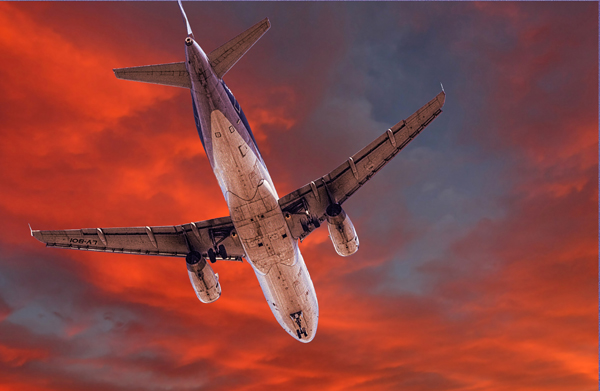 Taking the plane out of this picture is surely possible with the old tools, but it is by no means a quick task. With Content-Aware Fill, we simply make a crude selection with the Polygonal Lasso (don't stray too close to the edge of the plane) and hit Shift+Delete to bring up the dialog below. 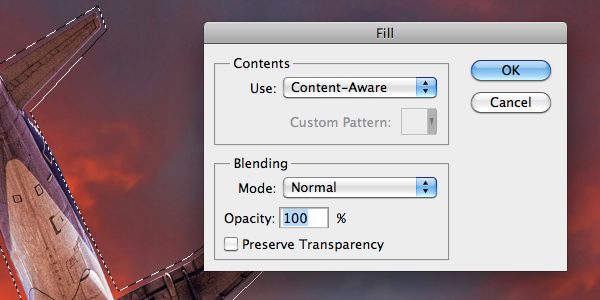 The default settings in this dialog are perfect so when it pops up just hit the "Enter" key and Photoshop will go about its business. Depending on file size and machine specs, this can easily take over a minute to process. Just remember that it's faster than doing it manually!

The result is rarely as perfect as the demo videos would have you believe, but it is nevertheless extremely impressive for an automated task. If you've spent a lot of time cloning, you know that just getting an imperfect base filler in place that you can then smooth and tweak is a major step in the cloning process. This incredible tool has done that job for us.

Now all we need to do is run the Clone Stamp, Healing brush or even more Content-Aware fills over a few key areas in a cleanup effort and we're ready to go! I spent less than two minutes fixing the problematic areas and came up with the result below. 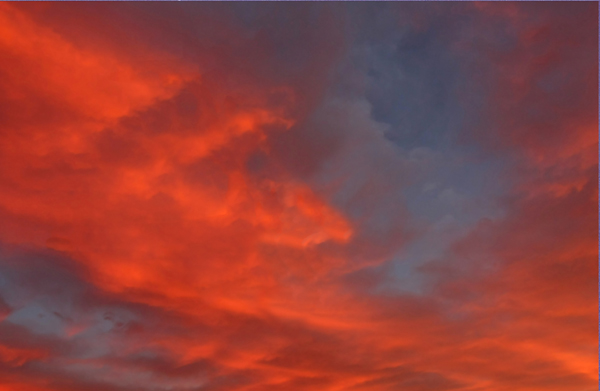 The layered, multi-colored clouds in this photo present us with a complicated texture that we have to fake with a lot of accuracy to be convincing and Content-Aware Fill takes a lot of the work out of this normally painstaking process.

It's frequently the case that you'll shoot a subject on a solid background in order to then change that background to something else. This process involves making an often very complex selection and then refining it for hours on end to create a believable end product.

The recent arrival of the Refine Edge command has sped up this process by leaps and bounds and Photoshop CS5 has improved this tool even further. To see how it works, we'll start with this photo taken on a white background. 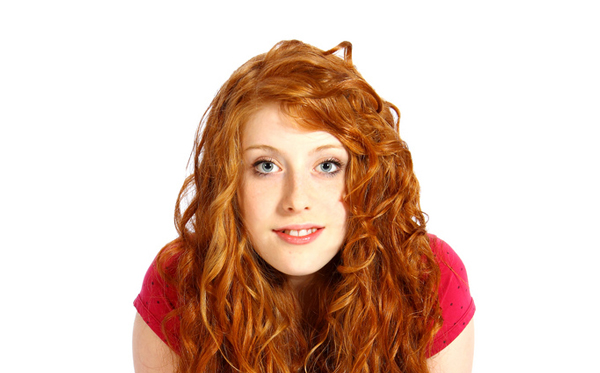 The first thing we need to do is make a selection. Using a number of typical selection techniques I came up with the following mask.

I actually pride myself at being fairly good at selecting even complex objects like hair. However, one thing I constantly run into is a halo effect that comes from changing the background of an image with soft edges. Fortunately, CS5 has some big improvements to help with this problem.

Using the selection I structured, I'll bring up the Refine Edge dialog and opt to see my image on a black background so I can easily spot the problematic areas.

As you can see, there are definitely some areas that need improvement. Most of the commands in this dialog were also in CS4 so we'll try to focus on the new stuff.

For starters, there are some new radius commands. It's a bit technical, but the radius essentially refers to the width of the area around your selection that Photoshop will attempt to analyze. Hard edges should have a fairly small radius while soft, complex edges should have a much larger radius. Images like ours have both hard and soft edges and the Smart Radius command attempts to automatically build a good radius based on its analysis of the edges. 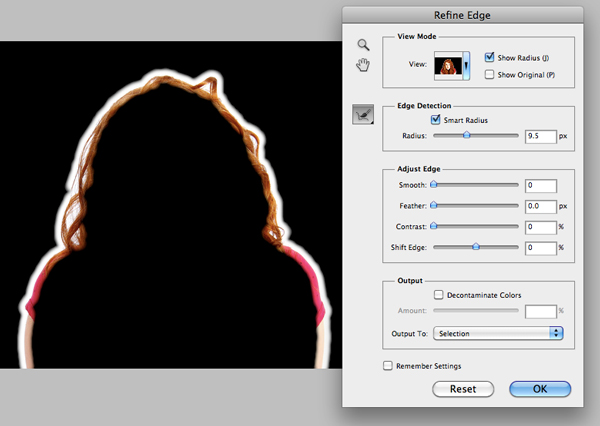 The other new feature here is one of my favorite new functions in CS5 because it saves me a lot of tedious hassle and annoyance. The halo that I was talking about earlier can now be removed fairly easily by checking the "Decontaminate Colors" box and moving the slider.

This is going beyond making a selection and is actually changing the pixels of your image in an attempt to remove the color contamination from the background. Since it's a rather destructive method, it outputs to a new layer and keeps your original intact. 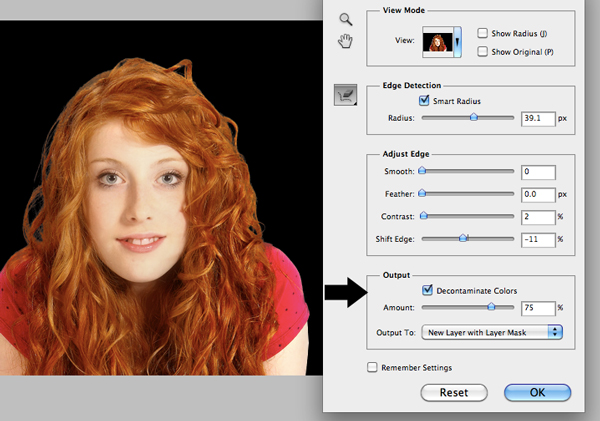 The final result isn't half bad considering Photoshop did most of the work!

The new features above are primarily for those photographers who have the need for drastic editing. However, there are some great new features for the more pure photographers as well. For instance, the Lens Correction filter can now automatically attempt to correct any unintentional distortion on an image. Previously, this was a manual-only option. 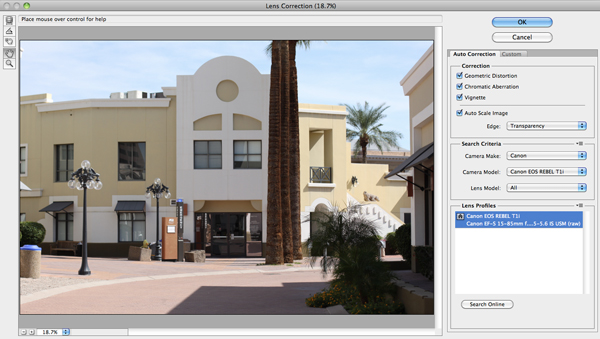 Photoshop can attempt to repair three characteristics: Geometric Distortion (noticeable bowing), Chromatic Aberration (fringes between dark and light portions of the image) and Vignetting (darkening around the edge).

Photoshop uses the exif data from the image to attempt to make the corrections based on your camera and lens specs. You can also set these manually, then Photoshop will check an online database and make corrections accordingly.

Another new feature that will help out photographers immensely is an upgraded Camera Raw tool set. One of the primary changes here is the addition of a couple of extra sliders for helping you cut down on the noise in your images. 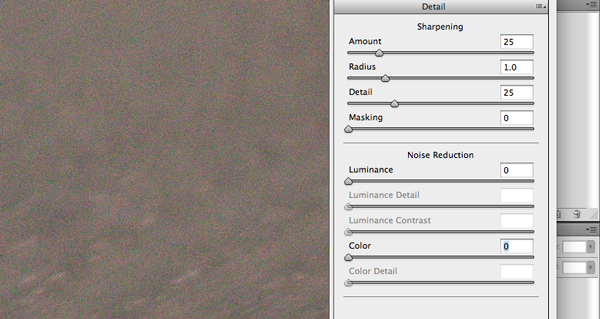 In addition to the Color and Luminance sliders, three more have been added to help you regain some detail that is otherwise destroyed by the noise reduction techniques used by Photoshop. Comparing the noise in the image above to the one below, you can see that these are some very powerful options that really take a lot of the pain out of shooting with a high ISO. 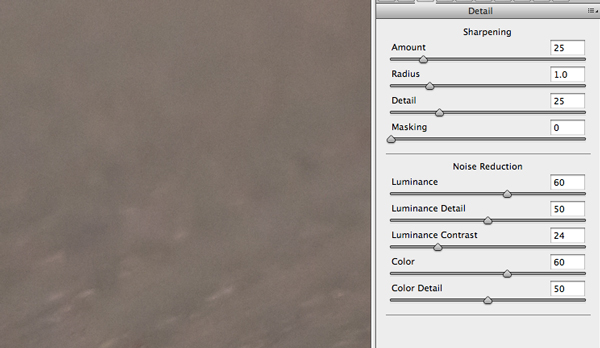 Interestingly enough, the new Adobe Camera Raw also lets you perform the opposite of the effect shown above by adding grain to an image to make it look intentionally aged or vintage. This feature can be found under the new "Effects" tab in the Camera Raw dialog where you'll also find some improved options for Post-Crop Vignetting.

The last feature we'll look at is the greatly improved HDR processing in Photoshop. The entire process has been overhauled and a number of new options have been added.

After you select your images and choose to merge them inside of HDR Pro, you can adjust several new sliders to get just the look you want.

This can obviously be used to make the kind of crazy over-saturated images you see all over the web (shown below) but even more importantly it can be used to adjust the tonal breadth of images in a much more restrained and professional manner.

Another great new feature here is the "Remove Ghosts" option which helps you reduce any blurring due to inconsistencies between your two images. As an example, imagine you're shooting a tree that's blowing in the wind. The branches would appear in different places in every image and the only way to fix this would be to manually apply masks to prevent the overlap.

Photoshop cuts out this step by attempting to identify the points of difference and focus on the information from a single image in those areas.

It's interesting to note that while these new HDR features are impressive, they may still be far from the best in the industry. Several reviewers have stated their preference for Photomatix Pro for HDR processing, even after the updated Photoshop HDR Pro feature.

However, this software won't replace all of Photoshop's other features, which means you'll have to drop an additional $100 after you purchase Photoshop if you want to go that route. If you're not keen on spending the extra cash, Photoshop's revamped HDR workflow should be plenty to get you started in creating some astounding HDR images.

The information above only scratches the surface of the improvements in Photoshop CS5. There are plenty of other new features you can use to edit and improve your photography in a variety of ways. Check out Adobe's Photoshop site to see a comprehensive list of the new functionality.

Leave a comment below and let us know what you think of Photoshop CS5. Is it worth the expense of upgrading or are you perfectly happy with an older version? If you've already upgraded, we'd love to hear your thoughts as well. As for me, I'm thrilled with Photoshop and all of the other applications in CS5 and am still finding impressive new features on a daily basis!

Josh Johnson
Equal parts editor, writer, designer, & photographer. I work for Envato and have written tons of stuff for Design Shack.
secondfret/
Weekly email summary
Subscribe below and we’ll send you a weekly email summary of all new Photo & Video tutorials. Never miss out on learning about the next big thing.
Advertisement
Translations