I was recently sent to an assignment at a local haunted house attraction called The Dent Schoolhouse for the annual Halloween issue of the newspaper I work for. I had around an hour to get at least two photographs. I packed as light and as mobile as possible: full frame camera, 50mm and 24mm lenses, a lightstand, one flash and an umbrella. I would have left the lighting gear, but haunted houses are usually a bit dark. Let's see what I came up with!

I took a quick tour of the schoolhouse. The main character is a scary janitor. That caused me to choose a bathroom scene for my first shot. While the actors got their costumes and make-up on, I got my lights set up. I wanted to use the limited ambient light as my general fill light, so first I had to nail down that exposure. 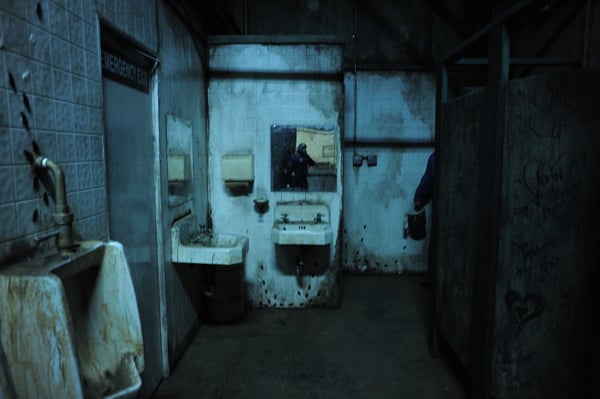 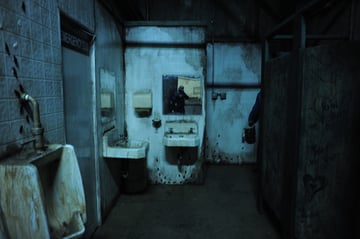 Next, I wanted to get my flash setup as the key light for the models. You know how everyone tells you never to light people from below because it makes them looks creepy? Well, that was pretty much my goal, so I lit from low and too my right. I apologize for not including a photo of that. The flash was in a reflective umbrella. I partially closed the umbrella around the flash to control spill. Here's a test shot with my hand as a stand-in model. I use this hand technique a lot when shooting portraits. 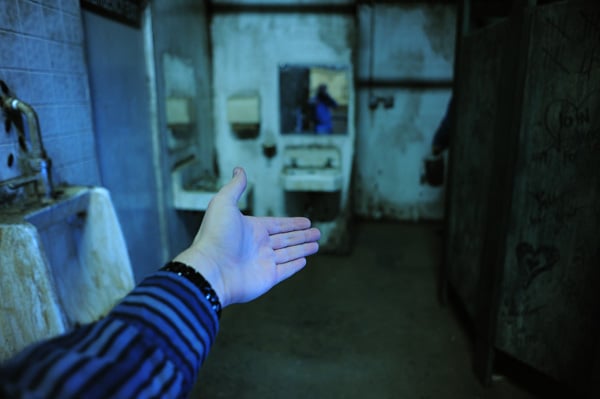 Adjusting your white balance using the manual K settings is a great way to change the look of your portraits. First I put my white balance around 2500K, which is basically the right white balance for candlelight. It turns your flash and most every other source of ambient light a dark orange/red color. This could be a good choice for a bloody Halloween murder scene. 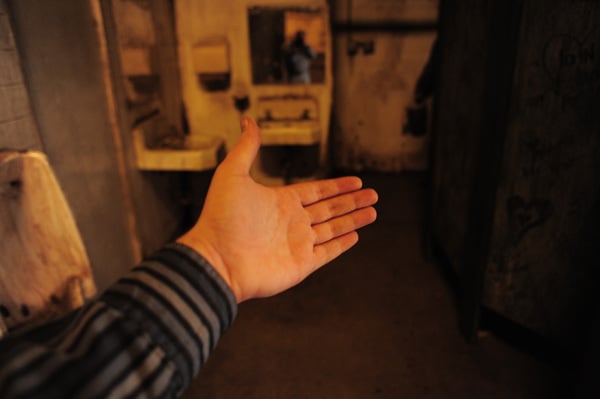 Next, I cranked my white balance up to 10,000K. Some cameras don't go up this high, but anything above 6000K will usually work. This makes the image take on a eerie blue color. Obviously, if you're shooting RAW you can do this white balance adjustment in Photoshop. In fact, if your camera has a limited white balance range, shooting RAW might be your best option.

Using this technique, I can create two completely different looks with just the twist of a dial.

When shooting portraits, I talk a lot. My favorite technique is to create situations for the subject to think about or act out. In this case, acting was the best bet. For this image, I prompted the female subject to reach out to me as if I was her only hope. There were three tricky parts to this image. 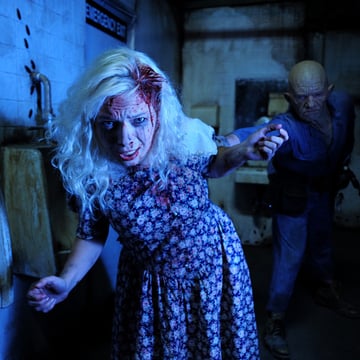 To achieve the fleeing sense, first I just made sure we could see both of her arms: one reaching out and one pulling away from the killer. You can see this in the image above. Next, I felt that killer needed to look more aggressive. I had him employ a prop. 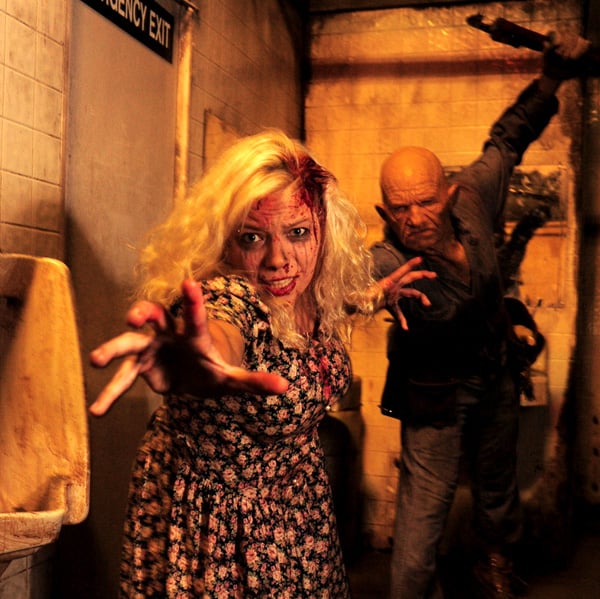 I now had less than 30 minutes until the haunted house opened to the public, I headed to the next scene. I left my camera settings and flash alone, but when I got to the bay of lockers that I wanted to photograph, I realized that there was virtually no ambient light. I opened up umbrella fully and pumped up the power a little. This allowed me to fully light the area. I again chose a low angle of lighting for the horror effect. 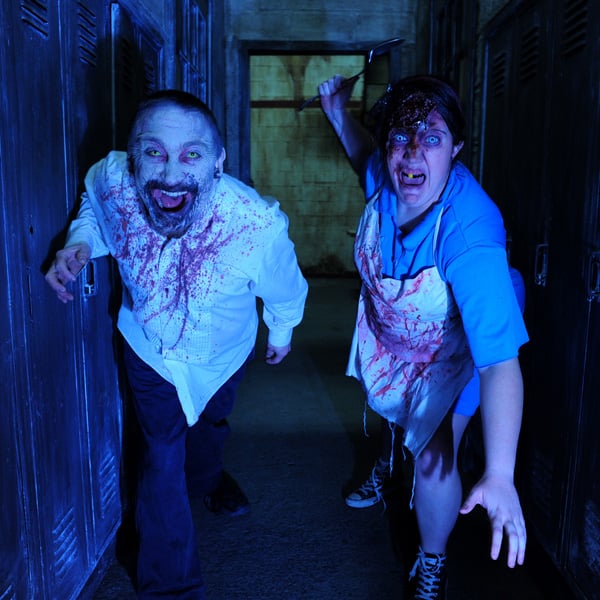 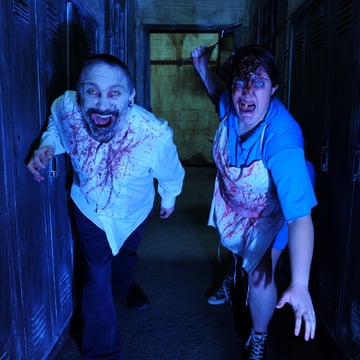 This composition was simpler because the environment wasn't as complex. I want people to understand there were lockers, but I more importantly, I just wanted the space to feel confined. The cleaner background allowed each of the people to have equal weight in the photo instead of just emphasizing one of them. 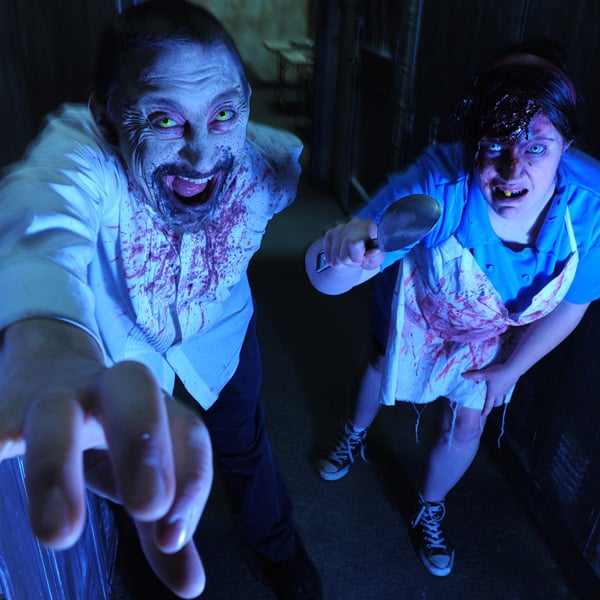 You may have noticed that many of the images above are cropped into a square. This is due to the shape of our cover. Since our newspaper is tabloid size, I knew in advance that our cover was square. I find it easier to visualize a square crop when I shoot vertical. So the uncropped versons of these images are all vertical. You might try the same technique. Back in the old days of film, people who worked with a square frame medium format camera often said it helped them frame vertical image better when they switched the more conventional 35mm format. There seems to be some correlation. 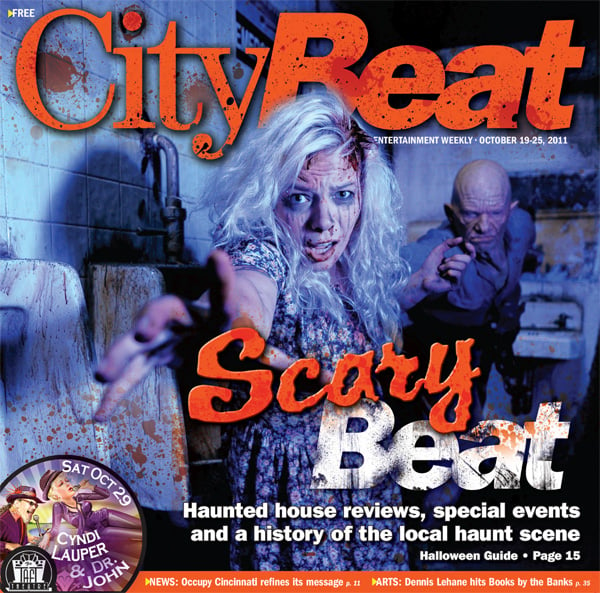 This particular issue had an outside cover for the entire paper, as seen above. Then, the inside special section had its own cover, which you can see below. Because in the United States orange and black are the traditional Halloween colors, the designer went with the blue tinted images. If he had used the red/orange images, it would have been harder to make the text stand out. 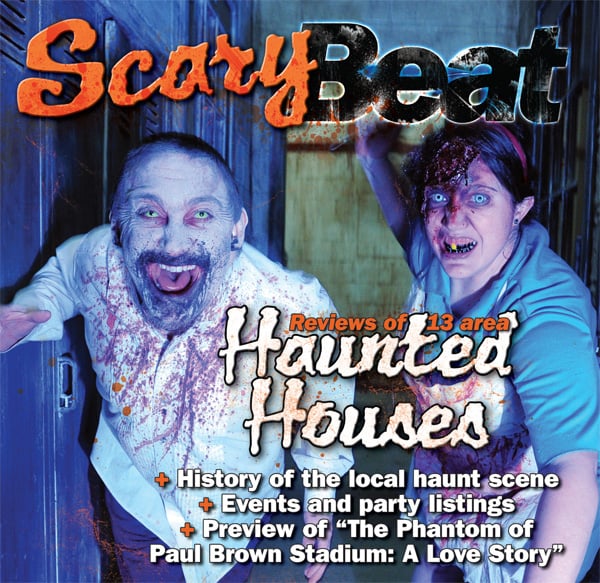 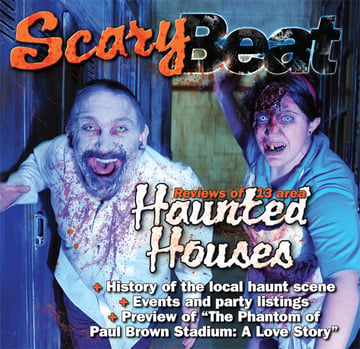 Good thing I messed around with the white balance. It allowed the designer to use the traditional orange color in the some of the fonts. It stands out really well against the blue since blue and orange are complementary colors.

If you have haunted house attractions in your area, keep in mind that many are organized by charities or as a hobby by the owners. This means that most can't afford to hire a photographer to obtain high quality photographs. Most places will happily have a few actors come in early for a portrait shoot. This could be a great way to diversify and improve your portrait portfolio without hiring make-up and hair artists and spending a fortune on a set. Sometimes, you'll also be donating your services to a good cause.

You may even be able to negotiate a trade where you shoot some standard promotional shots for them to use, and then you can use their sets for more interpretive work. All of the actors I dealt with were very enthusiast and the shoot was more fun than I deserve to have. If you have a chance to try this, go for it! You only have a week or so before the haunted houses close, so don't miss out.

If you have any favorite Halloween images, taken by you or others, don't hesitate to share a link to them in the comments.