Silhouettes can be an excellent way to add drama to a scene. The stark contrast and lack of detail in the subject infuse a psychological effect into the image that can be beautiful, mysterious, or even frightening.

Today we'll look at a few suggestions to keep in mind the next time you set out to shoot some silhouettes. We'll also examine the settings used in some real-life amazing silhouette shots to see what we can learn from them. 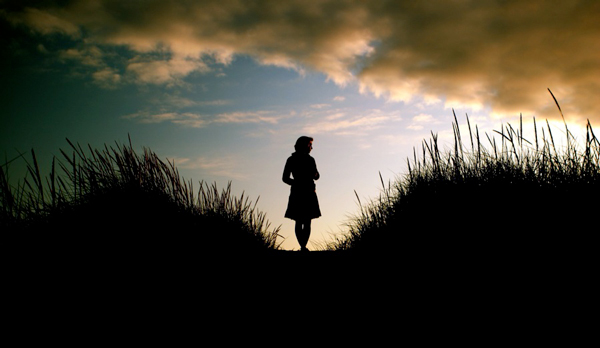 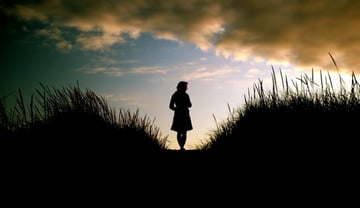 Before you consider the technical details and camera settings, you need to put some thought into your subject. It's a tricky situation that will involve a bit of experimentation to get just right. You'll want your subject to be relatively simple and very pronounced in shape on a two-dimensional level. The nature of a silhouette shot means that you'll stripping any detail and nearly all perception of depth from the subject.

Be wary of subjects that are overly blocky and/or obstructive such as boring buildings or simple sculptures. Also be careful about including multiple people in the shot. If there is too much overlap, the resulting silhouette will be confusing and indistinct. Make sure each subject is clearly identifiable as an independent object.

One shot you see often is a "kissing silhouette" where two people are embracing and kissing but their faces overlap so much the resulting image is a little strange to look at.

As you can see in the photograph above, even though it's a great image, if you concentrate on the facial overlap of the silhouette, it's a little unsettling. If you try to mimic this shot, try to shoot the subjects when their faces are further apart, either right before or after the point of touching. Remember that these same principles apply to any two objects that will be overlapping in your composition, not just people. 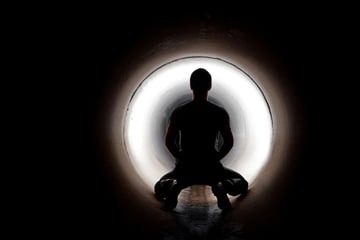 Obviously, silhouettes are all about backlighting. The basic idea is that the background will be so bright that it overpowers the foreground and the side of the subject facing you. This is where you have to learn to think and see like a camera.

If you've ever unintentionally shot a silhouette you know that what the camera sees is often not what you see at all. Sometimes you can see your subject just fine despite the bright backlight, but the resulting shot is a silhouette because of the differences in the way your camera and your eyes gather light.

We'll discuss this more when we get into settings, for now let's look at the two primary types of lighting scenarios for silhouette shots.

Lighting Part 1: In the Studio

Silhouette shots in the studio are the easiest to control as long as you've got the right equipment. Usually, you want to engineer your background to be fairly solid and simple to maximize the contrast of the silhouette. So grab a light colored, solid backdrop and hit it with your studio lights. Place these behind your subject but out of the frame.

If you want to control the tone and impression of the image beyond the shape of the subject, try infusing bright colors and experimenting with vignettes.

Another variable to experiment with is how much of the subject you want to be silhouetted. Partial silhouettes that allow selective areas of detail can make for some amazing shots.

Lighting Part 2: In the Wild

Silhouette shots in uncontrolled environments can be a lot more unpredictable, which can be good or bad depending on how well you can adjust to to rapidly changing lighting conditions. Sunlight can be tricky to use effectively to use for most of the day. This is why 90% or more of the outdoor silhouette shots you'll see are taken around sunrise or sunset. Naturally, since the sun is lowest in the sky at these points and is obscured by the most atmospheric interference, it makes an ideal and often colorful backlight.

However, as indicated above, this can be a lot more stressful than shooting in a studio environment because as the sun's position on the horizon changes, your lighting conditions will quickly be affected. If you're shooting in full manual you really have to keep an eye on the results and continually make adjustments. Make sure you are very familiar with your cameras settings - ideally you'll be able to make incremental changes without losing time by taking your eye out of the viewfinder. Unfortunately, your window of opportunity with the perfect lighting conditions is often quite small. 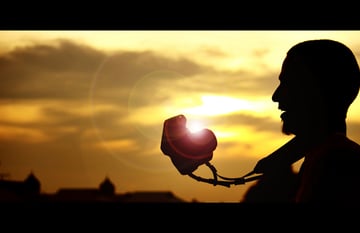 If you're shooting with the sun as your backlight, there are lots of variables to consider in the composition: clouds, buildings, elevation of the subject in relation to the camera, position of the sun relative to the subject, etc. Experiment with every one of these variables to see what produces the effect and mood you're going for. The photographer of the beautiful image above used an intentional lens flare as the central point of the image while positioning the subject to the rightmost third of the shot.

To get a feeling for how to set your camera to shoot good silhouettes, we'll utilize the "more properties" feature on Flickr to see how some actual photos were taken. Looking at what has actually worked for other photographers is an excellent way to learn how to take similar pictures yourself so make it a point to use this feature frequently! 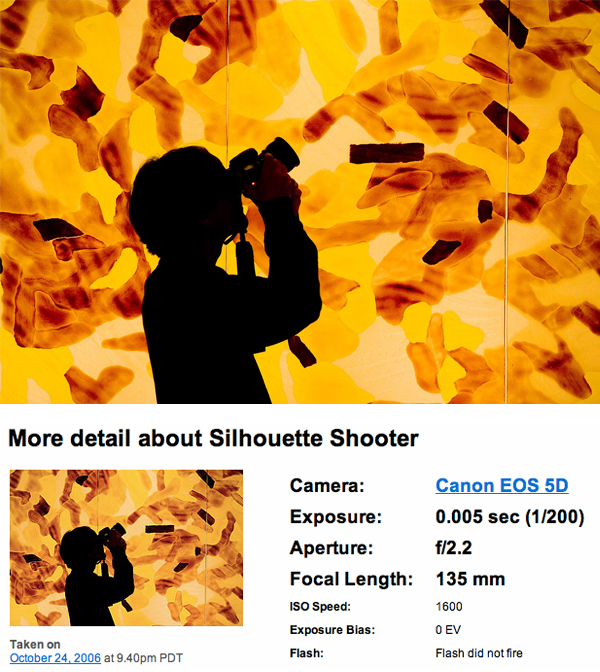 The image above shows that sometimes a complex background can work out really well under the right circumstances. It's not immediately apparent exactly what the light source in this image is. It might be a window or simply a colorful piece of glass outside of a well lit room.

As you can see, the exposure was set to 1/200 sec, the aperture to f/2.2 and the ISO to 1600. These three factors are very important pieces of the puzzle and have an immense impact on the final image. The shutter speed (1/200) is set fairly fast for a dark room. If you were trying to capture more detail, this would probably have to be closer to 1/100 or slower (making it more difficult to get a crisp image with a handheld) but since blocking out detail is exactly what you're going for, it works out well that you can shoot at a faster shutter speed. This benefit can allow you to capture motion silhouettes without worrying too much about blur.

The aperture at f/2.2 is actually letting in a lot of light despite the resulting dark image. Remember that when we're talking aperture, the higher the number, the darker the image due to the reduced amount of light being let in. Many lenses won't even reach as low as 2.2 - this, combined with the fact that the photographer was shooting with a Canon 5D, tells us that his equipment budget is fairly considerable. So don't be discouraged if your results aren't quite as good!

Lenses that let you shoot this low are perfect for low-light scenarios, whether shooting silhouettes or not. Just beware that as the aperture goes down, the depth of field will become shallower. The shallower your depth of field becomes, the more difficult it will be to get a crisp silhouette as only a very small portion of the image will be in focus.

Finally, the ISO was set to 1600. Remember that as the ISO increases, your image will get brighter but will suffer the unfortunate side effect of increased color noise. Again, this photographer shot with a 5D so color noise will be much less of a problem at 1600 than it would be for a cheaper camera such as a Canon Rebel. The relatively low amount of ambient light in the scene probably forced the photographer to shoot up at 1600. Outdoor silhouettes often benefit from the large amount of available light and can therefore be shot at closer to 100-200 if there is enough sun.

Luis and the Balloons

Though visually very different, this image is conceptually very similar to the last. We again see a lone figure in front of a colorful light source shot at a fairly high zoom level (coincidentally, it's the same photographer). This time the exposure is even faster, 1/250, allowing for even less light to enter in. The aperture is also set to allow less light in at 3.2 (still quite low by most standards). The low depth of field works really well for the shot here as it blurs out some of the balloons that are further away, enhancing the aesthetic of the shot.

Lastly, the photographer stayed true to his last shot and stuck with an ISO of 1600. Click on the largest version of the file to see the resulting color noise on some of the balloons. Again, this is not desirable but is often unavoidable when shooting in the dark.

Now that we've gone through how to break down and interpret the settings, here are a few more examples for you to consider on your own. 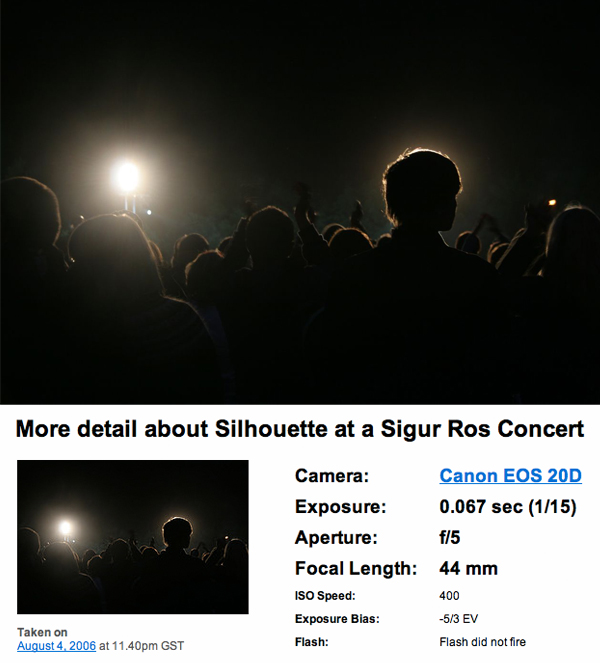 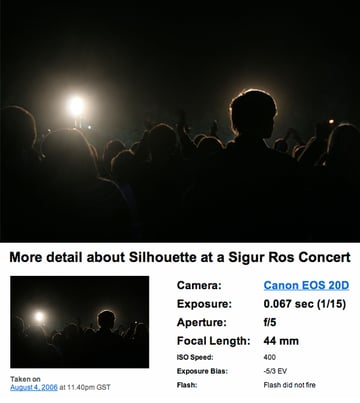 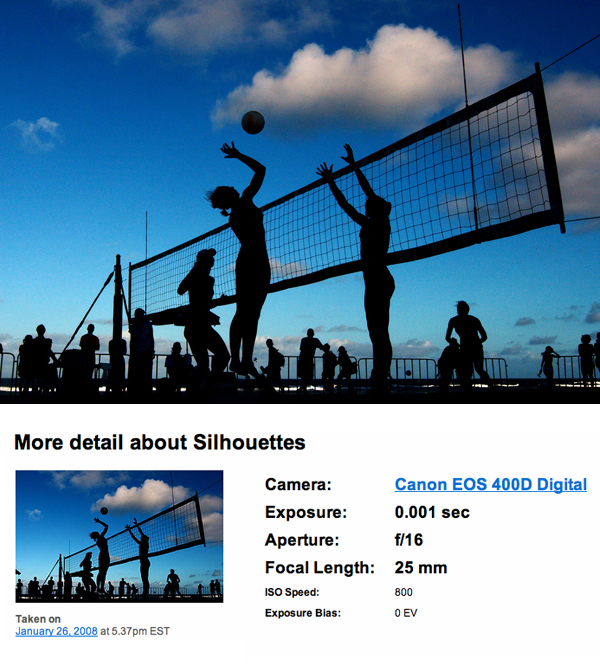 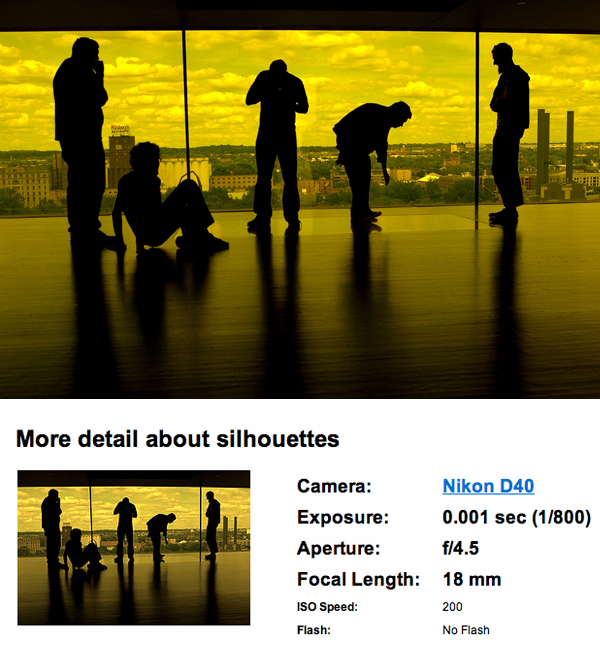