Step By Step Guide to Photographing a Beverage

Are you thirsty? Well, even if you aren't, go get a large cold drink before you continue reading. I hope the photos in this tutorial make you feel parched. Commercial and advertising photographers spend a lot of time with food and drinks, and they try to do just that. Food photography can be seen everywhere, but today we're going to focus on it's brother: beverage photography.

For the following walk-through, I used two strobes. One was used in conjunction with a “snoot." I put that word in quotes because I improvised the snoot instead of buying one. I don't really see the point in spending money on such a simple device. The second strobe was used with a small softbox.

To trigger these strobes, I used an inexpensive wireless set-up.

You will see three different lenses used today: an 85mm, a 50mm and a 24mm. These were used on a Nikon D700, which is a full-frame DSLR, so keep that in mind when noting those focal lengths.

The final pieces of the puzzle are some common drinks, a couple of glasses and some ice. The photo below shows a side view of the set-up for the first shot with the two lights labeled, logically, 1 and 2. 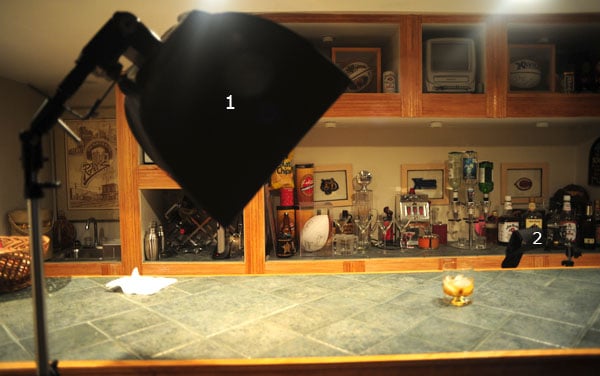 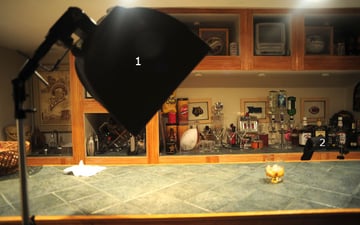 Unlike many images, the main source of light for this one will be behind the subject. Beverages are typically transparent. In order to really bring out their colors (and in some cases just to make them visible) the light needs to pass through liquid toward the camera.

With solid objects, like people, we make the light bounce off them and then back at the camera. To further control this, I used a snoot as I mentioned before. A snoot narrows the light from your strobe into a tight beam. I simply wrapped a black nylon bag around the strobe to create a tube. You can see this below.

For product shots like this that require subtle and slight adjustments to your lighting angles and strobe power, you're going to have to move around a lot. Sometimes it's better to get your camera set up on a tripod, so you don't have to constantly get behind it, refocus and recompose your shot every time.

For the low angle I wanted to achieve, I reversed the head of my tripod so it hung below the tripod. This a common feature for many tripods, so check and see if yours can do it. 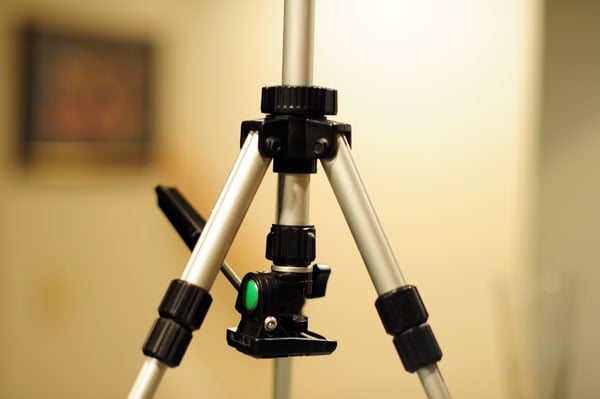 For this shoot, I was lucky enough to find a great green marble tiled bar. I wanted this to be a part of the shot as well, so it also needs to be lit. If you are incorporating any props or items that aren't liquid, they will need to be lit more traditionally from the front.

I chose to use a softbox to replicate the soft, diffused light that I associate with bars and pubs. You can see my entire lighting set-up below. The perspective is just higher than that of the final image. 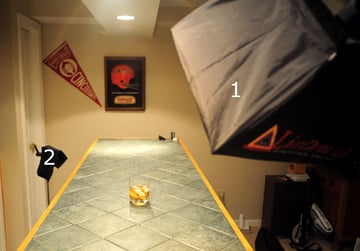 Whenever you have two or more light sources, you'll need to balance them. I find it easiest to do this one light source at a time. I usually start with the key light. In this case, that's the one with the snoot.

Doing a series of test shots, I adjusted the flash and my f/stop to achieve the proper exposure. I also took advantage of these shots to make adjustments to the angle of the flash and the size of the snoot opening. I wanted the beam to be very narrow.

You can see the results of this in the next photo. The glass and liquid are exposed properly, but the surrounding tile is very dark. 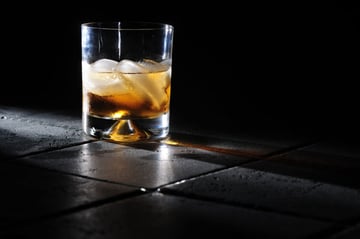 Once your aperture is dialed in for the key light, you'll want to leave it alone. The rest of the adjustments will be made with the power adjustment on the fill light. In order to really understand what the light is doing, I turned my key light off and did test shots with my fill light by itself.

The shot below shows the final fill light intensity. Notice that it is slightly under-exposed, and also note what the drink looks like. Front lighting just doesn't cut it with beverages. 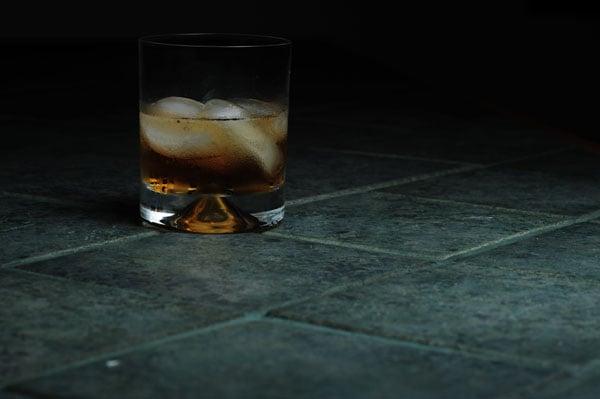 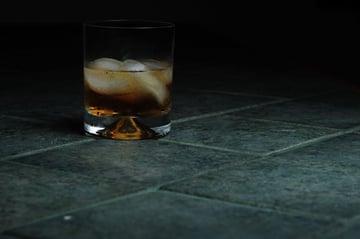 At this point, I turned both my strobes on and took my photo. I had my camera set at f/11 for this image. I used an 85mm lens. I was shooting in a relatively cool basement, so I wasn't too worried about the ice in glass melting. If you're in a warmer environment, just wait to add the ice until you're ready for your final shot.

Also, be conscious of condensation on the side of the glass. I chose to let it be a part of the shot, but this might not be appropriate for all situations. If you're really worried about it, make sure your liquids are at room temperature and avoid keeping ice in the glass. You can even buy fake ice cubes if necessary. Also be sure to clean your glass very well and avoid touching it with your fingers.

Once you've got your exposure dialed in, it's easy to change your angle or even your lens. I decided to try another angle on this shot, and I'll go ahead and recap the steps of the shoot with this new angle to sum things up. First, expose for and properly adjust your key light. 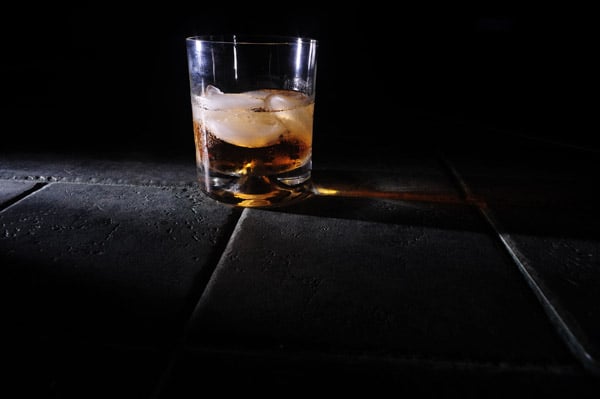 Second, expose for your fill light. I chose to slightly underexpose it, which is a common decision in a situation like this. But your environment may call for something different.

Finally, double check your glass and ice. Give everything one more good clean. Add the ice now if you were waiting. Then go ahead and take the shot. This version of the photo was made with a wide angle, 24mm lens. 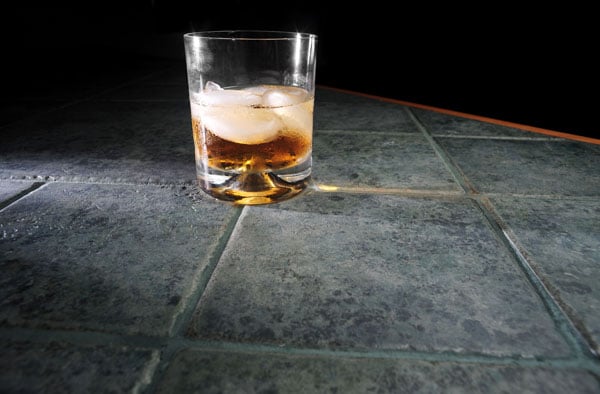 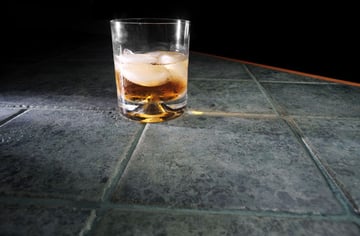 Bonus Shoot: A View From Below

The set-up I just described could be used to produce images of whiskey (which I used), martinis, wine, cocktails and many other drinks, but I wanted to include another set-up that might be more appropriate for lemonade or even beer (both of which you'll see).

For this technique, I used the same softbox as before. I used a 50mm lens on my D700. I also got together a couple stacks of books, and a pane of glass from a picture frame. From the image below, you can see how things are organized. The position of the tripod is where I will be shooting. 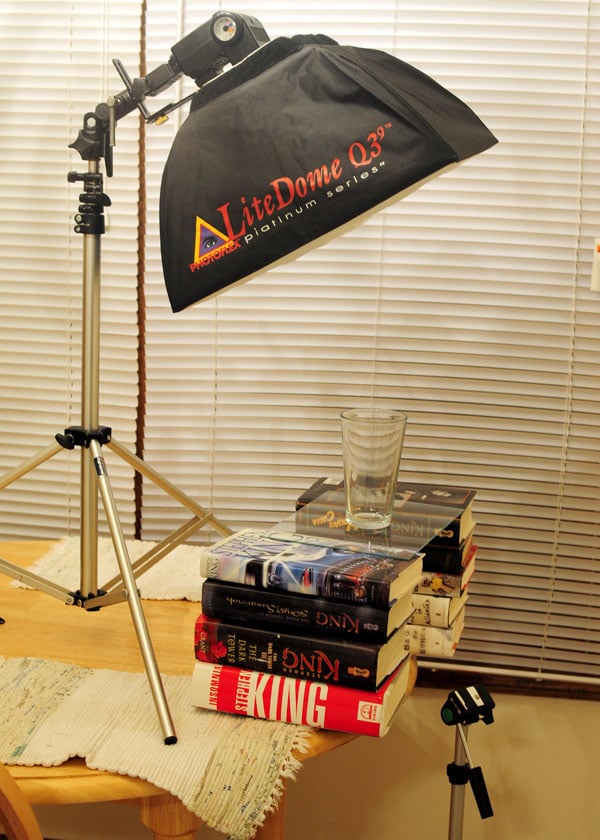 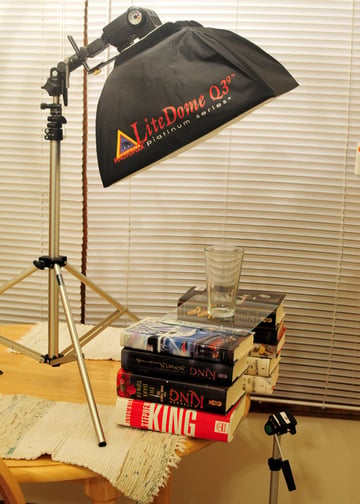 For this technique, the softbox acts as both your light source and your background. The exposure is achieved by keeping your strobe set at a low power, and then taking some test shots to dial it in.

Keep in mind, that you want the background to be completely white. It's most likely that your first instincts will be to underexpose the beverage. Just keep opening up that aperture until you're happy with the result. 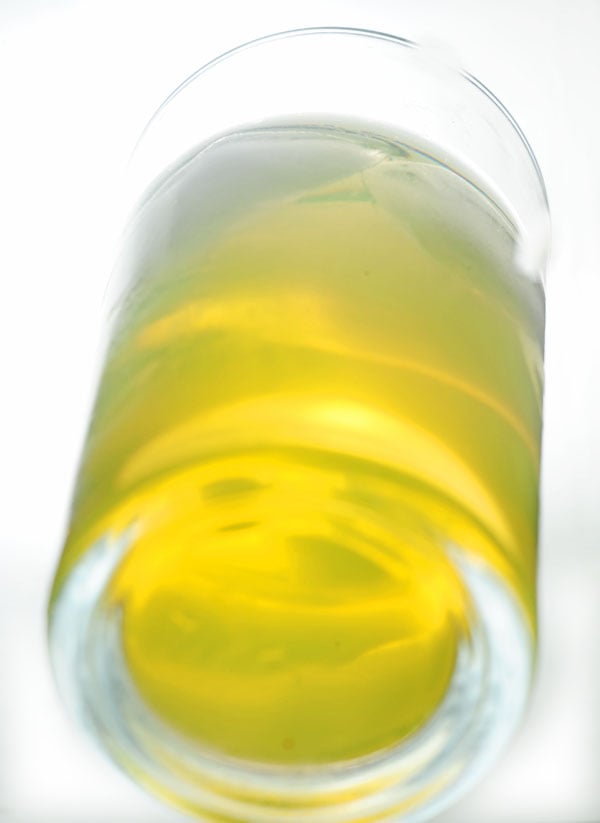 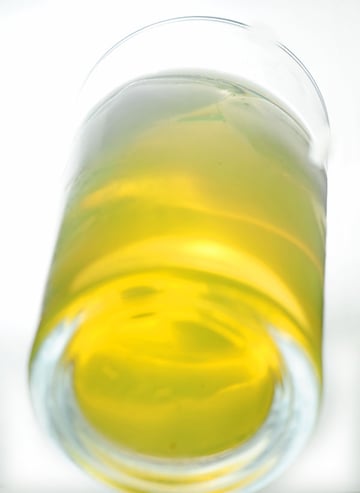 Shooting beer is tricky. I wanted to capture some bubbles rising up from the bottom, so I gave the beer a little stir just seconds before taking the shot. Cleanliness is even more important with this arrangement than before. Make sure your pane of glass is as clean as you can get it. Cold drinks can also create condensation on your pane of glass, so be aware of that as well.

This technique can also be used outside using the sun instead of a softbox. Trees or clouds could be incorporated in the image to give a sense of summertime and make the beverage look extra refreshing.

To recap, most liquids are best illuminated from behind so light can pass through them. The light doesn't have to be directly behind your subject, but it can be. The glass, the liquid, and more than either of those, ice will bounce the light around to give a glowing effect if indirect light is used.

Secondly, keep things clean. If you look closely at my images, you might even think that I could have done a better job with this.

Finally, the most touchy part of photographing beverages is temperature. Remember to, whenever possible, eliminate this factor from the equation. Either incorporate condensation into the image or keep all your ingredients at room temperature. If these options are unacceptable, add ice just before shooting.

Now, you can dive in with all of those commercial and advertising photographers, and try to get your share of the profits!