Every two weeks, we revisit some of our reader favorite posts from throughout the history of Phototuts+. This tutorial was first published in October of 2009.

The reason many people are drawn to photography is its ability to communicate an idea universally. Writing, speech, and even most music depends on language. Photography does not. A great photo in England is a usually a great photo in China. A great novel in English is a just of bunch of jumbled symbols to someone who doesn't know the language. There is another form of art that has almost the same universal appeal and even more universal acceptance: Dance.

Today we'll be taking a look at various tips and techniques for dance photography, so you are fully equipped to capture stunning image of this art form.

Much like looking at a photo, watching someone dance needs no knowledge of language.. And dancing doesn't require any fancy, expensive equipment. Unfortunately, shooting great dance photos requires a lot of practice (and fancy equipment can help!). The reason I am drawn to dance photography is that it contains a puzzle or paradox. Photography is a still, frozen art while dance is an art of motion. Trying to capture and convey motion by not using any motion can be a real challenge. But have no fear, I'm here to help. The following photo shows a traditional Hawaiian dance which using hand motions to symbolize things like water, time and sleep.

I am a huge fan of the saying "cameras don't take good pictures, photographers do." I often try to steer people away from expensive equipment, and I try to keep my kit simple as well. That being said, modern technology can greatly increase your chances of making solid dance photos with enough practice. You are essentially shooting in an extreme environment. The lighting is typically very dark and the dancers are moving very quickly.

I would recommend an DSLR that has a good reputation for shooting at high ISO settings. Many times you'll need to crank the ISO up as far as it will go. It would also be helpful if the camera has a high frame rate allowing you to shoot multiple photos in a sequence. 90% of the time when shooting dance on a stage, you won't be allowed to use a flash. So having a "fast" lens will also help. "Fast" means the lens has a wide maximum aperture usually f/2.8 or wider. I also usually find that telephoto lenses are extremely helpful, something with a focal length of 85mm or longer.

Auto focus lenses are also important because almost every camera ever made is harder to focus manually in low light. The following photo shows why shooting dance doesn't work so well with a wide angle lens from right under the stage. The lines of the dancer's body are distorted, the low angle is unflattering, and too much of the background is included. By moving farther away and tightening up with a telephoto lens these problems are solved.

The biggest challenge for many photographers is lighting. As I said above, equipment can help, but understanding some basics about how light (especially stage light) interacts with you camera is important. First, you'll want to evaluate the color of light. The actually means two things, color temperature (white balance) and perceived color. All artificial light sources produce light that is not exactly white. Florescent lights are a little green, household or tungsten lights are orange. Our eyes adjust to this naturally, but if you start looking for it you can usually tell. This phenomenon is what we describe as color temperature.

If your camera allows it, I would highly suggest you go into your white balance settings and manually adjust the color temperature, which will be in Kelvin or simply K. The lower numbers are for more orange or red light, the higher numbers are for more white and blue light. But often times stage lights are gelled, meaning the have colored filters on them to intentionally make them a different color for dramatic effect. Gelled lights and digital cameras don't really mix well. Digital cameras tend to over saturate this type of light leading to glowing, unearthly, neon results and even a loss of detail in well lit areas.

In all cases where gelled lights are used, I would go into the settings of your camera and simply turn down the saturation as far as it will go. You'll still see the color, but it won't over power anything. The photos below are an example of shooting with your camera set at regular saturation and shooting with the camera set at low saturation. Notice the neon glow on left, this can some time be used to create an interesting photo, but the effect should be used sparingly. 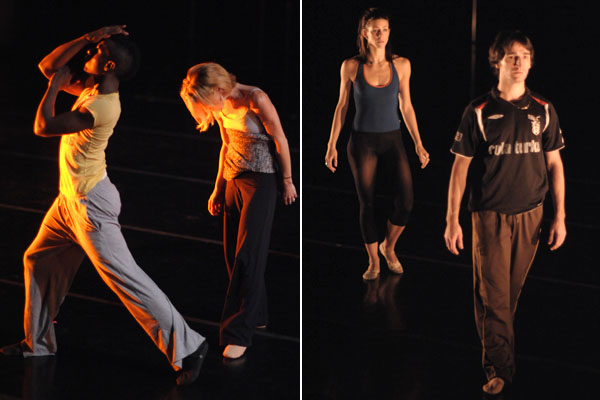 Sometimes the single dancer in a single pose against a clean background can have a lot of power, (there's even one featured later in this article) but we've all seen these many of times and they can get a little boring. Imagine a book of just these kinds of photos, it would get a little redundant like an instructional manual. As with many other types of photography, creating layers in your photos really separates them from the pack.

Look for things to frame in the foreground or try to fill the background with other dancers or elements. Look for interesting decorations in the background. Shoot past the dancers in the front of a show to dancers in the back. Instead of shooting at the stage straight on, move off to the side. This will move a lot of the other people on stage behind your subject. The photo below is from a square dancing session. The cut-outs of dancers on the wall allowed me to mirror the actual dancers with another element in the room - in art terms this technique is called repetition of form.

Speaking of art terms, let's talk about the four ways traditional artists create the feeling of movement in their work. The first is called anticipated movement. This principle is a little tough to explain. The test for this is if the photo or painting were to suddenly come to life, what would happen? Would the subject fall? Would their leg be broken? Basically if the pose of the subject is impossible for someone to stand on the ground and hold for a few moments, then you've achieved the effect. Someone can not just float in the air, so if we see a photo showing that, we know that the person was jumping.

The second technique goes by many names, but basically means a blurry outline. This can be achieved by slowing down your shutter speed. Sometimes you can pan with the subject so they are more in focus than the background, sometimes you allow their fuzzy motion to be offset against a static background.

The third way is pretty difficult to achieve without a high-tech flash. It is called multiple forms. You often see this technique used in technical diagrams. A person will be shown in multiple overlapping positions in the same image.

The final way to create a feeling of movement actually doesn't depict the physical movement, but just offers the viewer several things to look at in the photo thus making their eye move around the image. The technique of repetition of form achieves this most of the time. The photo below is good example of anticipated movement (and a bad example of creating layers). The dancer would fall out of the air if she suddenly came to life. 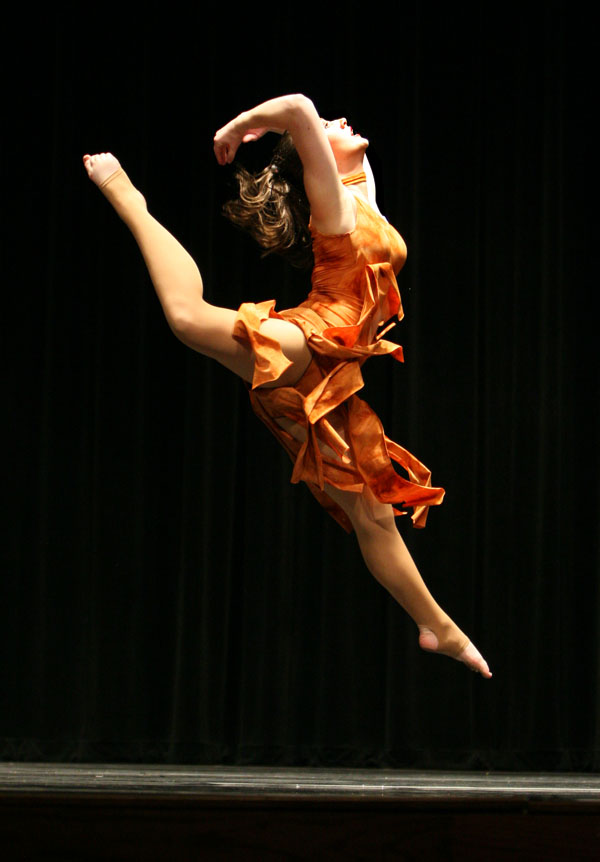 The next few sections are going to be tips and smaller things to look for. While movement, lighting and layering are typically things you'll want to think about on every single dance shoot, there are smaller things you may only want to utilize occasionally.

The first of these is getting a good moment. While all photographers hope that their images capture a moment of high emotion or action, I'm referring more to smaller off-beat moments. Keep an eye out for the little things. These might not be the most important thing happening that day, but they can have a flavor and quirkiness that really captures the scene you're in. The following photo was taken at a wedding. While all the adults were dancing and socializing, these children were having their own party. 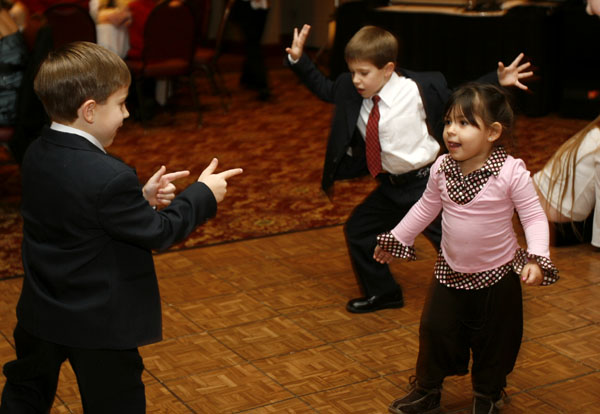 Many forms of dance rely on different poses that are held for brief moments. Keep an eye out for these. The dancer is frozen for a split second giving you some relief from having to maintain a fast shutter speed. Dancers also work on the form and shape of these poses their whole lives to insure a good look even if they only hold them for a fraction of a second. These poses are often held while turning or while being lifted as well.

The next photo shows two dancers working on such a pose in class. If you look at their shapes closely, you can see the younger dancer working to match the shape of the slightly older, more experienced dancer.

Keep in mind that dance is a full body experience and a body is made up of many parts. Don't be afraid to focus on a specific hand motion or foot position while shooting. How many aspiring young dancers have posters showing a close up of the slippered feet of a ballerina? Well, the following shot is a little spin off of that poster for aspiring bar hoppers training for the club scene.

Bringing It All Together

The last shot and the featured photo for this tutorial has a lot of the elements that I mention above. It was shot with a long lens from a position higher than the floor. The tones are not over-saturated even though purple gels were used on the stage lights. It has a many layers, but still has a distinct subject for the viewer to look at. The series of girls wearing the same outfits and holding the same prop creates a nice repetition of form, and the many faces and converging lines push the viewers eye around the image suggesting movement.

Remember, some of photography is knowledge, but a lot of it is also luck. But just like the lottery, you won't win if you don't play. So get out there and play. The more times you shoot challenging subjects, the more rewarding the results will be!