Colour is something that we human beings take for granted. It is a basic element of existence, like gravity or bad pop music, that we instinctively understand whether we choose to investigate it or not. For example, most people will know not to buy a car in hot pink in order to maintain resale value, or eat purple bananas, even without having to actually understand how that purple is actually composed. But in working with a visual art such as photography, a more in-depth, and most importantly, consistently communicable, understanding of colour is required.

In life, it is enough to know that a banana is "somewhat purple" and therefore no good, but your camera sensor should do a better job of recording that purple as an image.

Not only that, your monitor should be able to give you an accurate representation of what your camera captures and what comes out of the printer should be consistent with what you see. This, in reality, is actually much harder than it appears to be.

It could be interpreted to mean the study of our psychological perception of colour, the physics of the visible spectrum of light, or the human physiology surrounding the act of seeing, from having most to least coverage by photography articles respectively. For this particular article, I just want to talk about the various methods of describing colour in the realm of digital media.

To satisfy the need of describing colour objectively, we turn to the least subjective and therefore "best" tool, mathematics! This gives birth to colour models, abstract mathematical models used to communicate colour concisely. They are, in effect, simply different ways to define interpretations of groups of numbers, which reflect different colours. The three most common colour models are RGB, CMYK, and RYB. As RYB is mostly used in painting, we will focus on RGB and CMYK.

Note that colour models are not to be confused with colour spaces like sRGB or Adobe RGB. Colour space is a topic that I won’t get to in this article, but can be thought of as specific implementations of a colour model. 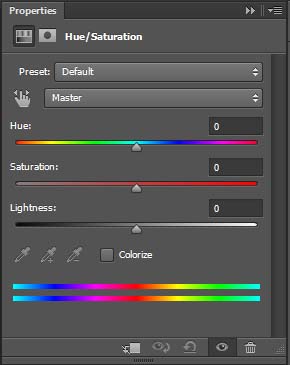 HSL is used in Photoshop… so it must be pretty legitimate.

There are various methods that we can choose from to describe colour, but the most common is to use the properties of Hue, Saturation, and Lightness, making up what is commonly called the HSL representation.

Hue, simply put, is the specific tone of the colour. It can be defined as the wavelength of light which appears to be most dominant in a colour. Personally, I like to think of hue as "colouriness," relating to the simplest perception of colours learned as children. When we say that the sky is blue, or that grass is green, we are referring to the hue of those objects.

Saturation is the intensity of hue, and can be thought of as the colour’s "purity." Full saturation of the colour will result in only that colour, where no saturation results in the same hue rendering as grey.

We tend to use this methodology when describing colour to ourselves or editing photos because these three independent dimensions are all very naturally intuitive to the human perception of colour. Colour temperature is an application of hue, exposure levels relate to the lightness, and what we call "flatness" is actually just colour saturation. 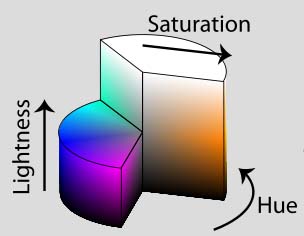 The cylinder is the potential range of the HSL representation. All possible colours fall somewhere within the cylinder.

Although the HSL representation is natural for humans to interpret, computers do not necessarily agree. HSL is simply another way of interpreting what computers actually use, the RGB colour model, which is the most common colour model used in most electronic systems. 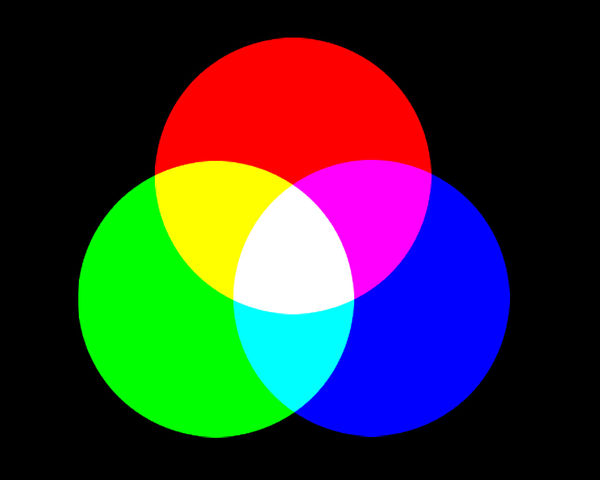 In the RGB colour model, the primary colours of red, green, and blue are combined to form it's possible range of colours. This behaviour is typical in light.

The main attribute of the RGB colour model is that it is additive. What being additive means is that all potential colours are formed using a specific combination of the three base colours: Red, Green, and Blue.

Starting with black, the primary colours of red, green, and blue are combined in specified amounts to create other colours. Mixing the three primary colours in equal amounts gives a result of white, the combination of all colours. This can be demonstrated by using a prism to separate white light.

Remember that the RGB colour model applies to light and therefore applications such as digital displays, but doesn’t apply to paint or print. Mixing red, green, and blue paint won't make white paint, but is an awfully fun way to make a mess as an adult! (It will actually give you black, see below.)

People often mentally relate working with the RGB colour model to the integer value 255. This is because that is the maximum value in most computer implementations of RGB. RGB colours are expressed using three numbers, representing the value of each base colour.

Because of its relationship to natural light, RGB is by far the dominant colour model that we are exposed to in photography. These three primary colours are used in everything from coloured histograms to digital camera sensor design.

CYMK: In Print, Less is More

While RGB is the most common colour model, the CYMK colour model is also very important, especially in the realm of printing.

In the CYMK colour model, the primary colours of cyan, yellow, and magenta are combined to form it's possible range of colours. This behaviour is typical of ink on white paper.

The key difference between CYMK and RGB is that where RGB is additive, creating colour through combining primary colours, CYMK is subtractive, and creates colours by removing colours. The three colours which are removed are Cyan, Yellow, and Magenta, combining to form the first three characters of the abbreviation CYMK. The K stands for Key, referring to the black key plate used in addition to the three primary colours. (It may be easier to remember K as the last character of blacK, since strong>B is already used for Blue.)

Black ink is used because while combining the three primary colours because while they technically should combine to make true black, in reality they results in a dirty brown due to impurities in the ink, and must be supplemented.

The CYMK process is applied to print through blocking off colours on a white background using ink. The light that would normally be reflected by the paper is reduced by coloured ink, in effect "subtracting" colours from white.

In practice, this conversion won't always be exact. So while converting to CYMK is necessary before sending the file off to a print provider, it is advisable to do the actual processing work using the RGB colour model. While this seems counter-intuitive at first, there are actually quite a few benefits of doing so.

Secondly, even though RGB has a larger gamut, the file sizes are smaller. This is because the data used to store colour has three channels (red, green, and blue) instead of four (cyan, yellow, magenta, and black). Not only that, colour balance is easier to accomplish in RGB, since neutral colours contain equal proportions of the three primary colours, which is not necessarily true in CYMK.

Working in the RGB colour model also insures seamless integration with web media. For all these reasons, it is advisable to only convert to CYMK before sending a file off for print, and not before.

RGB to the left, CYMK to the right. Notice that the conversion is not perfect, but the right image is more akin to what the print would look like. (Actually, since you are looking at the image with an RGB monitor, it is an RGB approximation of the CYMK approximation of RGB... fun?)

I think that if there is one thing to take away from all this reading, it is the fact that the there are a wide variety of ways to representing the same colour. None are better or worse than others, but simply have different benefits and limitations.

The three most relevant methods of describing colour are the HSL, RGB, and CYMK models. HSL is a more human-friendly interpretation of colour based on factors that we can easily identify, which makes it more suited to editing photos.

RGB is based on of the physics light combinations, explaining its dominance in most areas of digital photography from digital camera sensors to monitors.

CYMK is the opposite, a methodology of using combinations of colours to block light with primary applications in printing. In the end though, all three are addressing the same issue of consistently communicating a colour.

Playing with converters can really give perspective on how these different models relate to each other, and cement the fact that colour models are similar to different languages having different words for the same things.

I hope that this article has been informative for people. Please comment below if there are any questions, concerns, or suggestions.