In the last two years, movements such as Strobist have really popularized the use of creative flash. By removing the flash from above the camera, you can expand your lighting repertroire and illuminate subjects in ways that on-axis flash simply cannot. The Nikon Creative Lighting System makes this process fun and easy.

A number of methods can be used to get the flash away from the camera. Up until a few years ago, this was mostly accomplished through the use of long cords and cables. As with almost any other type of technology, these cables are now disappearing and transitioning to wireless technology.

There are a number of different wireless systems available, such as Pocket Wizards, RadioPoppers, and Cybersyncs. Another wireless system that may already be built into your camera (if you shoot Nikon) is the Creative Lighting System, or CLS. The Creative Lighting System by Nikon allows for wireless off camera flash with some additional features built in. Today we're going to take a look at what you'll need to get started and some of the things you can accomplish with it. 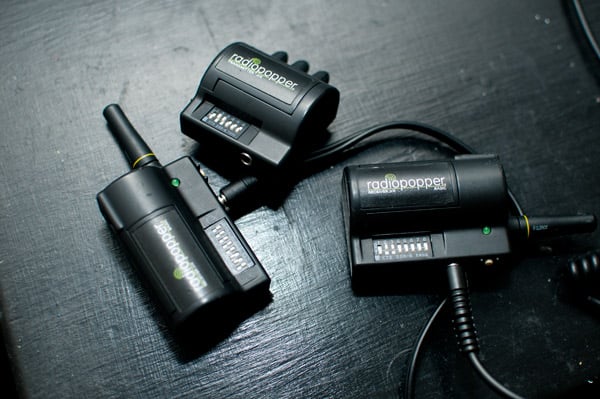 RadioPoppers are another popular wireless flash system, although they aren't built into your Nikon camera.

Many people automatically associate Nikon's "CLS" flash system with wireless off camera flash - and for many users, this is the most utilized aspect of the Creative Lighting System.. However, Nikon's Creative Lighting System is an umbrella term for a new generation of flash units with many advanced features. In addition to wireless triggering, the CLS generation of flashes brings with it advanced beam patterns, AF assist beams built into flashes, high speed sync, flash color correction, and advanced i-TTL fill flash.

Although the Creative Lighting System is an awesome technology, the full functionality is limited to Nikon flash gear, particularly the newer speedlights.

Nikon's CLS works differently from Pocket Wizard style systems. In the case of Pocket Wizards, the technology is based around wireless radio signals much like a garage door opener or cordless phone. CLS, on the other hand, relies on preflashes to propery determine the right amount of power to use, as well as to trigger other flashes.

Within a CLS configuration, flashes are designated as either remote or master units. "Remote" is a pretty self-explanatory term, meaning it can act as a remote flash in a CLS configuration. "Master" requires further explanation though. Using a wireless flash setup requires only the pop up flash on a compatible camera as a commander and a single speedlight as a remote, although more advanced configurations are certainly possible.

Here we see a flash acting as a "master" unit. This allows it to control the power settings of other flash units.

There are two reasons to use a CLS capable flash as a Master unit. As a Master unit, the flash sits attached to the camera in the hot shoe. If the camera doesn't support using the pop up flash as a CLS commander, (such as cameras like the D40, D5000, and many other entry level cameras) then a CLS capable flash in the hot shoe opens the door for use of CLS. Besides using a speedlight as a master unit, Nikon also manufactures an SU-800 commander unit that can control flashes without being a flash itself.

Another major reason to use a speedlight as a CLS commander is to manage your flashes better. On the back of the flash are menus that you can use to control the power levels and modes of the other flashes. If you don't have this available, you have to use your camera's menu to handle this, which can sometime slow you down and be more cumbersome.

The most interesting and widely utilized capability of Nikon's CLS is that you can use wireless, off camera flash with no additional peripherals. As was discussed above, you can use a variety of wireless configurations to use CLS.

Nikon's Creative Lighting System is a great thing. However, the line of sight wireless cannot be depending on 100% of the time.

One of the best features of the Creative Lighting System is the use of high speed sync. On most cameras, the fastest shutter speed that you can use with flash is 1/250th of a second, plus or minus a half a stop depending on camera model. However, with use of CLS, you can sync the flash with your camera all the way up to 1/8000 of a second shutter speed, although it does decrease the flash power. 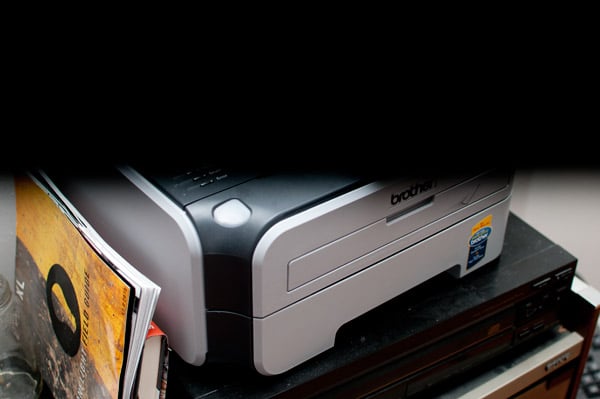 This is a frame taken with a flash with no high speed sync at 1/640th of a second. Half of the frame is cut off.

For me, this is a game changer. This allows me to shoot outdoors in the sunshine wide open. With the high speed sync capabilities of the Nikon CLS, you can shoot portraits with shallow depth of field during bright hours at any time of the day. Without this, you would have to use a small aperture and have much more than is desireable in focus.

In this section of the tutorial, I am going to walk you through what it takes to use a very basic CLS setup in the field. Step by step, we're going to walk through how to use a flash off camera with Nikon's CLS.

I did some tests to illustrate some of the situations that you can and can't use line of sight with. After working that out, I used a very simple setup: a Nikon D300 with a pop up flash as the controller, and a single SB-900 on a stand with an umbrella.

I went down to a nearby boat dock with a friend to demonstrate this. The first thing that I did was to set up the flash stand. I used an umbrella bracket on top of a flash stand to attach the SB-900. Next, I threaded through the umbrella. 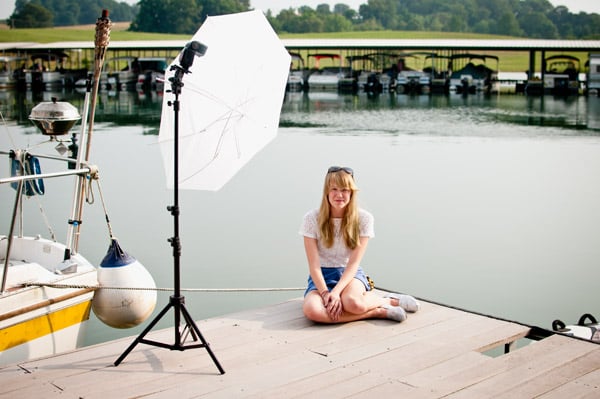 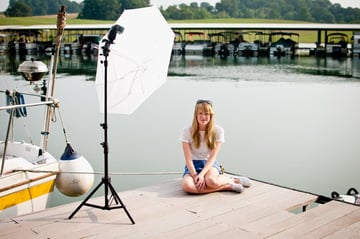 Next, I set up the technical side of our off camera flash configuration. On the D300, I entered the menu to change a couple of settings. Entering the custom menu, I entered the "E" menu to control the flash. I set my pop up flash to act as the commander.

I set the flash in Group A, in Channel One to Half Power. On the flash, I placed it in remote mode and ensured that it was in Group A and on Channel One.

It's important to ensure your flash and camera's channel and group settings align.

With the line of sight clearly established and my shutter speed set at a high sync speed, I snapped the resulting photo: 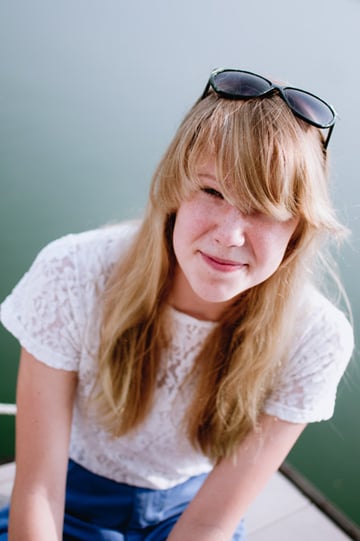 Note that because of the high speed sync capability, I was able to keep the aperture wide open for a shallow depth of field effect.

Nikon's CLS is a powerful technology. With a little bit of knowledge and practice, you can create advanced lighting setups with Nikon's speedlights, opening the door to new lighting setups.