Visual Expression: The 8 Basic Ways to Frame Shots in Your Videos

by Shruti Shekar27 Sep 2015
Difficulty:BeginnerLength:ShortLanguages:
FramingVideoVideo ProductionVideo EditingCinematography
This post is part of a series called Cinematic Shot Choices.
How to Use Shot Choices to Create a Cinematic Look in Video

In filmmaking, framing refers to how you choose to compose a shot for a specific scene. Framing allows you to emphasize or show emotions, thoughts, sensations and ideas. It is the ingredient that adds weight and feeling to the moment.

Framing is the essential expressive tool in filmmaking. In this tutorial, you'll learn about the eight key ways to frame your shots and how to use them.

Frames are an important part of creating a storytelling sequence. Variety in framing gives different perspectives for the viewer. It brings the viewer into the film, and lets them feel immersed in whatever is going on. Framing is very important choice! You can zoom the viewer in to watch a character's reaction, or it you can pull the viewer back to watch the scene unfold from afar. How you choose to frame strongly influences how your viewer experiences the action and the story.

Don’t forget that having a script, your brainstorming sheet and your storyboard will help you decide what kind of frames you need to use. It’s all about out being creative as you solve visual story-telling problems. Don’t forget this is your vision! So stick with your gut and what you think looks best.

I've included abbreviations and examples for each shot. You can add these abbreviations to your storyboard to remind yourself (or your crew, if you have one) how you imagined the scene while you were planning. As you plan your storyboard, try to visualize in your mind's eye how you want it to look.

An Extreme Long Shot is one that is generally taken to establish a scene. It provides a sense of place, context, and environment. It is taken from a great distance.

For example, let's say you’re talking about where someone lives and you’re setting the scene. The shot could be an extreme wide angle shot of the place: an aerial view of the neighborhood, a whole cityscape, a skyline.

Have you ever noticed in TV shows sometimes they show the picture or a map that shows terrain and land? The opening credits of TV shows like Law & Order or Full House, for example, include this kind of shot. The cinematographer wants you to know where you are before going in depth to the next scene.

A Long Shot is still used to establish a scene, but it’s a little bit more focused. A person might be in the frame, but if they are they have a lot of space around them.

Instead of showing the entire cityscape like you would for an Extreme Long Shot, you might do a long shot of the neighbourhood that the person lives in with a focus on the building that they reside in. The Long Shot can still be used to establish an area for someone. You’re still giving people context and a clue about what is going to happen next in that particular scene.

The Full Shot generally has a full-body shot, head to toe of someone, or a group. The Full Shot helps to give viewers perspectives of who is going to be interacting in the surrounding that you have established for them.

If you have established the cityscape is Toronto, neighbourhood where a person lives, next you might want to establish the location where your scene is happening.

Now remember, you don’t necessarily have to do it in this way, you can play with the order for effect. You could have a Full Shot first of a person talking with someone else, and then go to a Long Shot to establish your scene. There is no right answer to when you want to use a frame.

The ¾ Shot or the “American Shot” is a shot where edge of the frame bisects the upper thigh. This shot can create a dramatic dialogue scene.

It is also called the Western because, back in the day, it was used during cowboy and western scenes. When you saw the confrontation between two cowboys, one was closer to the camera facing the other in a standoff confrontation. This was used to create a dramatic dialogue scene without having to change the camera angle.

The ¾ Shot is also good when you want to emphasize the hands and torso, for example when your subject is using a tool or implement of some sort.

The Medium Shot is fairly simple; it’s a shot of your subjects in the frame but only waist and above.

You can use a Medium Shot for various reasons, not just a dramatic conversation like in a ¾ shot. It could simply be a conversation between two people. The Medium Shot gives a feeling of full interaction with your subject.

The Medium Close-Up uses the bust up. It's gives a feeling of more intimate interaction, and helps focus the audience's attention on a person talking. The person is the focal point of the frame.

In a Close-Up the subject's face fills the frame, with a little bit of breathing room. The Close-Up is a good way to catch when a person expresses emotion,. In dialogue scenes, it's a useful way to layer on non-verbal reactions in your character's face.

Lastly, Extreme Close-up is an extremely close shot of a particular subject or object.

Maybe a character is talking about the object in your scene and you want to show it visually. The Extreme Close-Up can be intense. It creates a strong emphasis.

It helps to have an outline of your film to figure out what type of framing you want to use and when. There are many types of shots, so it’s great that you have options, but you also have to be smart about when to use a specific frame.

If you want to show anger, you might want to do a Close-Up Shot of someone who is having a fight with someone. Or perhaps you want to do a ¾ Shot to show the confrontation between the two people. It’s all about what works best for your film.

In the end, there is no right or wrong way. Work with your brainstorming sheet, your story board and your script, then frame in the way you think is best for your scene.

Another thing that affects the way you frame is your aspect ratio. This is the ratio between the height and width of your frame. You'll notice that some of the examples above have black bars on the top and bottom or the sides. Christopher Kenworthy has a good tutorial on how to use the aspect ratio of your frame creatively. 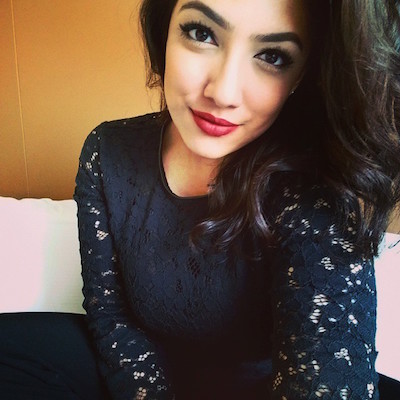 Shruti Shekar
Video/Photography Instructor/Toronto, Canada
I'm a youtuber/journalist/filmmaker and most importantly a positive thinker. I love making videos, taking photos and editing it all. I may be a diva fashionista, but deep in my heart I'm the biggest nerd. I love elephants and reading!
shruti_shekar
Weekly email summary