How to Create a Sense of Depth to Your Photos

Today we will take a look at how to add some sense of depth to your photographs and thus make them become alive and more interesting to the viewer. By making use of some simple but very effective factors that can be applied at the time of exposure, you can make a your picture pop. Today, we'll talk about perspective, depth of field, and framing.

While distant subjects appear smaller and smaller with distance, the brain can still make out their proper sizes. Same with straight parallel lines; although they are parallel to each other, with distance they seem to converge into a single point yet the brain perceives them as straight. This is known as Scale Constancy. Constancy is the tendency for perceived objects to give rise to very similar perceptual experiences in spite of wide variations in the conditions of observation.

Since photographs are optical recordings of reality, the same principles apply. And for a photograph to maintain a realistic appeal, the sense of depth in a scene needs to be preserved. Also, a heightened sense of depth tends to enhance the viewer's experience and give them a feeling of presence within a particular setting. This can all be controlled through various types of perspective (such as the ones described below) amongst other things, such as the depth of field and framing.

In photography, perspective is the technique of representing three-dimensional objects on a two-dimensional surface, and how objects' appearance seems relative to one another as determined by their distance from the camera.

So to enhance the sense of depth in your shots, you can utilize some of the factors below:

In photography, this is the most common type of perspective and is characterized by converging lines. Although those lines are mostly in fact parallel, the further they move from the camera the closer they seem to get to each other until they eventually meet in one or more vanishing points if they expand for a sufficient distance within the frame. This is because straight lines mostly become diagonal in a photograph, giving it a sense of dynamism, moving the eye through the scene, and adding a sense of depth. 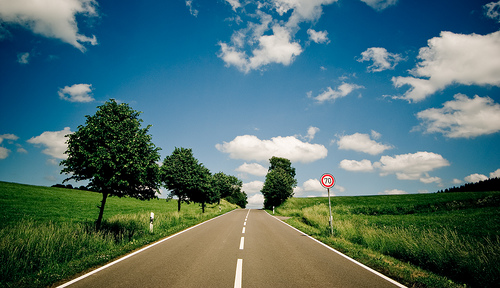 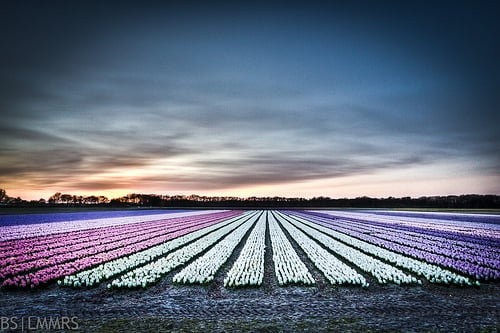 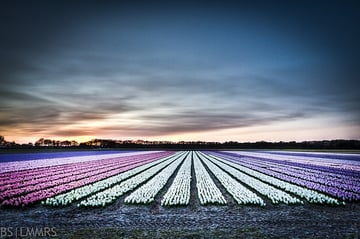 This is known as lens compression and it describes a characteristic of long lenses that makes a scene appear compressed (it compresses the distance between the foreground and the background and makes scene elements appear closer to each other and to the camera than they really are). The photo below was taken with an 18mm wide-angle lens, and you can see how the frame encompasses a wide range of the scene and accentuates the sense of depth by emphasizing and enhancing the appearance of converging lines. 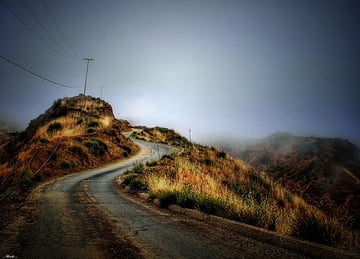 Converging lines are also affected by camera's perspective as having a low camera angle would make the converging lines give a different effect compared to if you took the shot from a high viewpoint.

Diminishing perspective is much related to linear perspective and it describes the way one thing appears smaller and smaller the further away it is placed from the camera. If you had a scene with a road and electric poles on both sides, the poles would appear the tallest at the foreground of the frame and then consecutively become shorter and shorter the more you move towards the background until they are but a speck in the frame.

This type of perspective works best with elements that are of the same (or very similar) size placed at varying distances from the camera, and because the human brain can still work out that they are of the same size, this adds a great sense of depth to the frame.

Another great example of the diminishing perspective is the popular spiral staircase scenario when photographed from above. In this case, imagine that there is a straight vertical line in the center of the staircase (this will serve as kind of an imaginary horizon; here it is vertical though). The further down the staircase goes, the smaller the circle in the center looks until it finally diminishes to a single point if it goes further enough. The photos below are great examples on that: 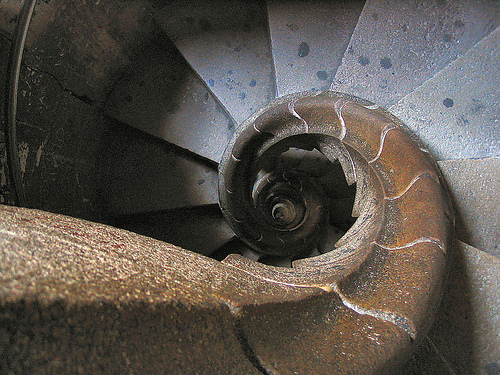 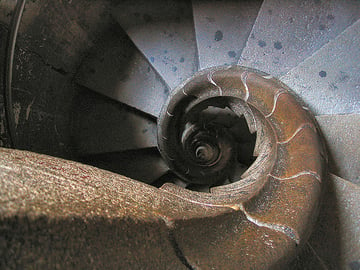 Aerial perspective (also known as atmospheric perspective) is mostly prevalent in landscape photography especially in misty, hazy scenes. Taking pictures in fog and mist emphasizes subjects' shape and form as well as adds depth to your scene. The closest subjects to the camera appear the most saturated and bold, but as objects move further away from the lens things start to get a bit hazy and colors desaturated.

When viewed in a photograph, it almost seems like the scene consists of layers one on top of the other. The tonal contrast between the foreground, the background, and the middle ground draws the eye to the distance in between and separates the different planes creating a sense of depth. 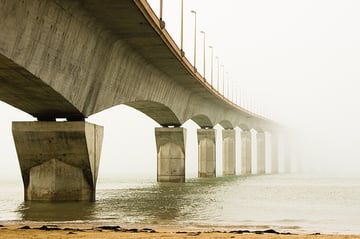 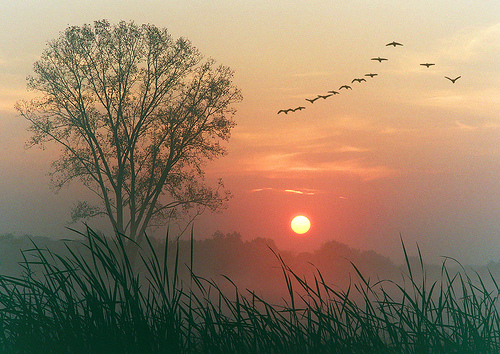 It is easy to feel the sense of depth in an image such as the one below. The eye starts at the obvious, the darker foreground. Then it moves outwards to the back with each bit getting lighter and lighter. A scene such as this usually consists mainly of one color, but the contrast between the different planes which is the result of difference between how the light falls on each does create a tonal map along which the eye travels and distinguishes each part from the next. 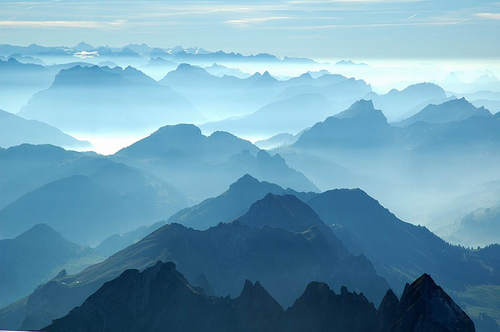 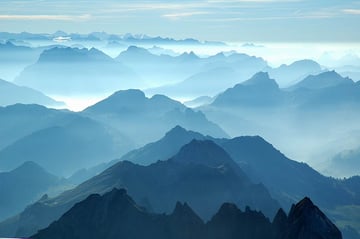 Incorporation of aerial perspective has been widely used in painting, and landscape photographers are more and more using the right weather conditions to their advantage to produce striking new representations of even the most previously-photographed scenes.

Long lenses actually work better to emphasize the aerial perspective of a photograph than wide-angle lenses because the part of the scene nearest to the camera (which is the one that shows less mist and fog and more object sharpness and color saturation) is usually cut out from the frame. Keep in mind that you might need a tripod if you are using a long lens though, as longer lenses tend to be more prone to camera shake than short and normal lenses.

Winter foggy and misty days are the best for this approach, but also hazy summer days or low-cloud forecast days work great as well. Exposure-wise, taking photos in such circumstances can trick your camera's light meter into thinking a scene is brighter than it actually is, causing some under-exposure.

So what you need to do is dial in a couple +stops using the exposure compensation feature on your camera, or if shooting in manual mode take the reading of the scene and then adjust your shutter speed or aperture or ISO overexposing the scene by a couple +stops.

Tonal perspective describes the way we perceive object placement within a frame (and thus the photo's sense of depth) in that lighter tones appear to advance within the frame and darker tones appear to recede. This can be emphasized by placing lighter objects against darker backgrounds which helps make them stand forward and adds a sense of depth to a photograph.

Also objects' colors play a role in the perceived sense of depth of a photograph as warm colors (such as red, yellow, and orange) tend to advance and cool colors (such as blue, violet, and green) tend to recede. So placing a red object against a blue background or a yellow object against a green background will emphasize and enhance the sense of depth in a photograph.

Depth of field influences the degree of sharpness or blurriness that different elements of the frame have. Our brain perceives sharp objects as being closer in distance while it perceives blurry objects as being further and further away the more blurry and unclear they become.

Imagine shooting someone standing right in front of a brick wall at f/2.8 for example, while focusing on the person. He or she will appear just a little bit sharper than the wall (of course since the wall recedes to the back).

The sense of depth perceived in the final image where your model is furthest from the brick wall is the most intense because the difference in sharpness between the foreground (the model) and the background (the wall) is the most pronounced. 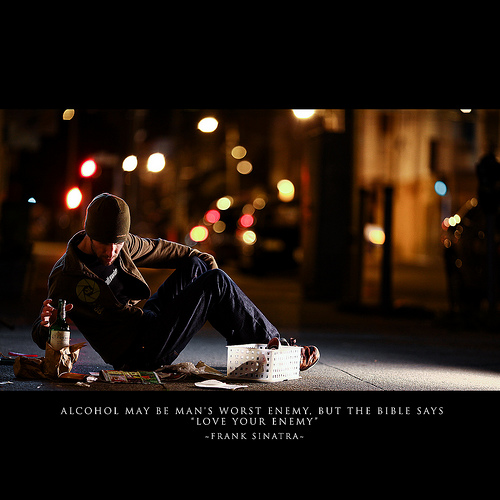 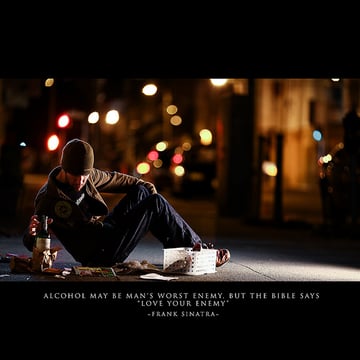 Using foreground objects to frame your main subject or the receding elements of your photograph can be a very effective way of adding depth and guiding the viewer into your scene so that they feel like they are inside the photo as if almost exploring it rather than just looking at it. This also helps add a feel of activity, dimension and dynamism. 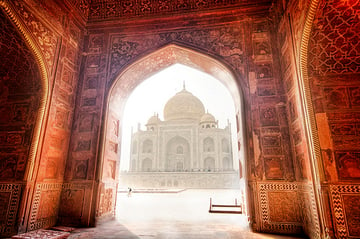 Those were some easy yet effective ways to help you add more depth to your photos and make them more interesting and engaging to your viewers. As you can see, they are all techniques to be carried out at the moment of the exposure. Some of these can be mixed together as can be seen in some of the example photos above, and if executed correctly the results can be even more stunning.

CompositionFast Prime LensesAdobe Photoshop
Did you find this post useful?
Yes No
Would you like to provide feedback (optional)?
Cancel Submit
Want a weekly email summary?
Subscribe below and we’ll send you a weekly email summary of all new Photo & Video tutorials. Never miss out on learning about the next big thing.
Sign up

Diana Eftaiha
Diana Eftaiha is a software engineer. You can visit her website at www.dianaeftaiha.com