It's important to understand what microphones do and how they work when capturing audio. Each type and model comes with its own set of features and characteristics that can be used to your advantage when recording a subject. In this audio recording tutorial, we're going over pencil condenser microphones. So let's jump in and start breaking this tool down.

A pencil condenser can be just what's needed when a shotgun microphone or lavaliere microphone won't work. It's simple to use and doesn't cost a fortune.

What Is a Pencil Condenser Microphone?

The term pencil mic or pencil condenser is usually used to describe a class of small diaphragm condenser microphones that are used for acoustic instruments, such as acoustic guitars, drum overheads, and small percussion, and they all share the same general shape. They're all relatively short in comparison to a big shotgun microphone, and they're cylindrical and quite narrow.

So why are pencil condenser microphones useful for video production? Well, two main reasons: they are small, and their polar pattern is wider than a standard shotgun microphone. This means they can be used indoors when a shotgun microphone may present a problem.

Also, shotgun mics are large. If you are in an interior and you have a shotgun that is a foot or longer, getting it up high enough if you have people standing can be problematic. That's where these smaller pencil condenser microphones can come in handy.

How to Use Pencil Condenser Microphones

They are basically used the same way you would use a shotgun microphone. Most often they are put on some sort of boom with a shock mount, and you'd boom them over the talent and point them in the general direction of their mouth. Because these types of microphones have a wider pattern, you have a little bit of wiggle room regarding where the person is positioned. You don't always have to have it focused right on the person's mouth. If it's pointed in the general direction and it's close, you can get great results.

Because of the size of these microphones, you won't see them labelled as a shotgun pattern. But you will find them in cardioid, super cardioid, and hyper cardioid. The super and hyper can be great for getting that tight directionality on the microphone, while still giving you a wider pickup pattern compared to a shotgun mic. 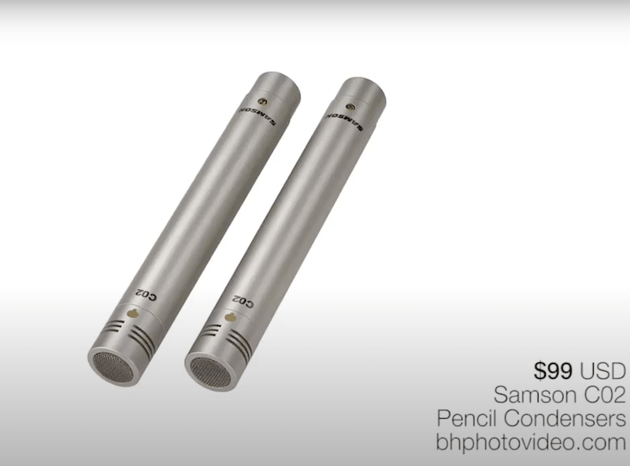 One advantage of a pencil condenser over a shotgun mic is that because it's so small, you can easily move it about 8 inches closer and get a better signal to noise ratio. The signal will be closer to the source, which means more sound from the subject is being delivered to the microphone with less room noise interfering.

It's important to remember that this is a cardioid pattern, and if you were trying to record two people with a single mic, you'd be much better off using this instead of a shotgun mic. This is because with a shotgun mic, when you go off axis from its pattern, you start to lose a lot of high-frequency information. Super and hyper cardioid pencil condensers are close to a shotgun's directionality, though still not as narrow. So you do have a lot of options.

While cardioid and super cardioid pencil condensers can found for a good price, hyper cardioid patterns will usually be a fair bit more expensive, The good news is that the accessories, like shock mounts and wind screens, are very affordable for all types of pencil mics.

The pencil condenser microphone is a great little tool to have in your arsenal, and it sounds fantastic. Coming up in our next audio recording tutorial, you'll learn about the last microphone that's really useful for video production, and that is hand-held microphones.

Audio ProductionAudioAudio RecordingAudio RecorderVideoVideo ProductionVideo EditingHow-ToTools & TipsTipsCondenser MicrophonesDynamic MicrophonesMicrophones
Did you find this post useful?
Yes No
Would you like to provide feedback (optional)?
Cancel Submit
Want a weekly email summary?
Subscribe below and we’ll send you a weekly email summary of all new Photo & Video tutorials. Never miss out on learning about the next big thing.
Sign up

André Bluteau
Ottawa, Canada
Andre Bluteau is a writer and producer based out of Canada. He specialises in Adobe Creative Cloud, Final Cut Pro X, and Logic.