In a world dominated by Photoshop, it's easy to think that any mistakes you make when you take a photo are easy to fix in post-processing. In reality this isn't true – especially when it comes to composition. There's more to composition than the rule-of-thirds. You could write a book about it and still only dip into the deep well of knowledge acquired by artists and photographers over the centuries.

This article is about an aspect of composition that you may not have thought about much before - Visual Mass. What is this? Visual Mass is the principle that certain visual elements attract the eye more than others.

Take a look at this photo. Where does your eye go? It should go straight to the volcanic island rising out of the sea on the horizon (the island is a dormant volcano called Rangitoto and it's a well known landmark in Auckland). Your eye goes there because of the distinctive shape and because it's in the lightest area of the photo. It has Visual Mass. It's not the largest element in the photo, but it's the one that draws your eye. 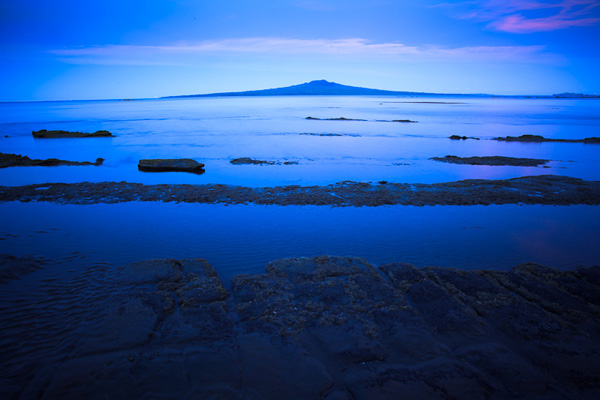 Now compare it to the next photo. It was taken a little later on the same evening, from the same viewpoint. I used a torch fitted with a red gel to paint the rocks in the foreground with red light. Where does your eye go now? It moves between the red coloured rocks and the island. The rocks, nearly invisible in the other photo, now have greater Visual Mass.

With a little practice, you can use the principles of Visual Mass to guide the viewer's eye around your photos. In today's post, we'll be looking at the nine most important elements of Visual Mass:

Part of the human condition is curiosity about other people. Our eye goes straight to any people that are present in a photo. Faces pull our eye more, and eyes (the windows to the soul) even more so.

If you include people in your photos you need to be aware of their Visual Mass. Use it to your advantage. If you're taking a landscape, for example, use people to create a sense of scale. Or, include a human figure right where you want the viewers eye to go.

In the photo above, the people are only a small part of the frame, yet the eye goes straight to them (the bright colours help too – see below). 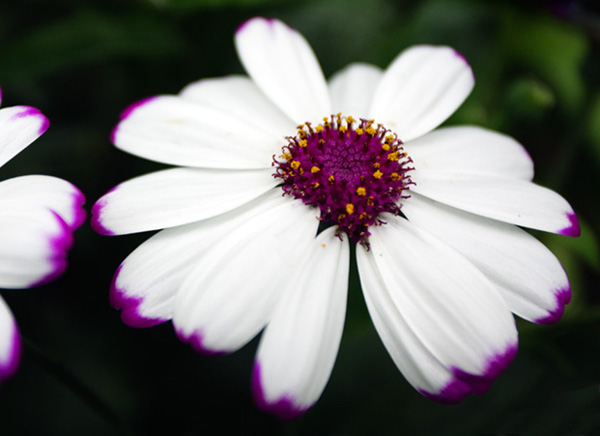 This is a concept I've written about in my articles on black and white photography, and it's just as valid in colour photography. Light tones pull the eye. One method of obtaining a strong composition is to look for light toned subjects against dark backgrounds. This always works well. White flowers against a dark background, as in the photo above, are an example of this technique.

The opposite also applies. Bright highlights in the background are a distraction, and draw attention away from your subject. 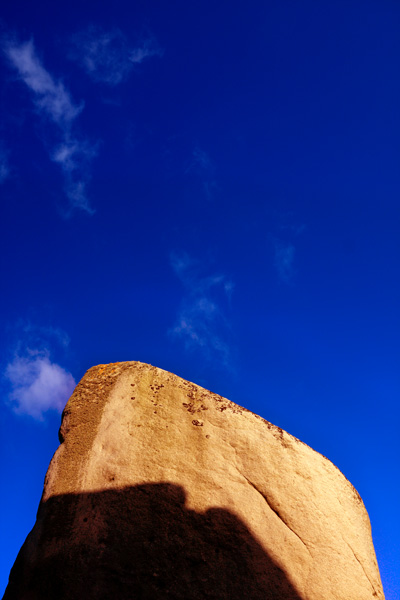 Colour has Visual Mass. Colour is so powerful that colour photography is considered a different medium entirely to black and white photography.

Warm colours pull the eye more than cool colours. Warm colours seem to come towards the viewer. Cool colours recede. Landscape photography is an area where you can use this to your advantage. Where does your eye go to in the photo above? Straight to the standing stone. The eye is pulled by the warm colour created by the light from the setting sun.

Bright Colours Over Dark Ones

Bright, saturated colours draw the eye. Red is the most vibrant colour of all. You may have heard the acronym RPS – Red Point Somewhere. There's a school of thought that no photo is complete without a point of red in it somewhere. Red is a strong dynamic colour. It pulls the eye like a pin to a magnet. So do other bright colours.

If your subject is brightly coloured, a technique you can use to make it stand out is to position it against a background that is neutral or dull in colour. Think greys, greens and earth tones. 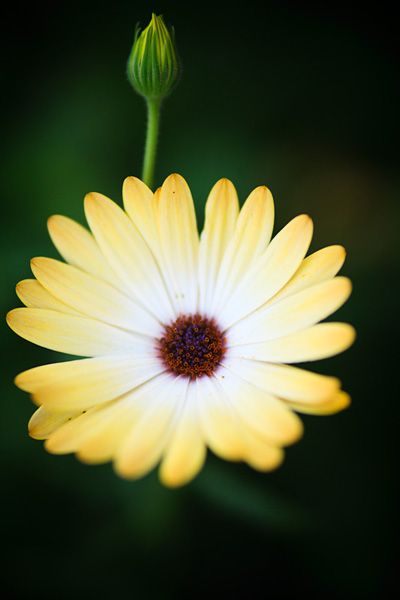 The viewers eye will go to the sharp areas of your photo before the unsharp ones. One way to use this to your advantage is focus on your subject and use a wide aperture to blur the background. It's also one of the reasons that it's important to focus on the eyes when you take a portrait.

Eyes draw the viewer's gaze. But if the eyes are out of focus, then the eye is also pulled towards the sharp parts of the photo. The viewer's eye goes between the two, and photo loses impact.

Where does your eye go in the photo above? It goes to the sharp areas first. The effect is strengthened by the flowers bright yellow colour.

Lines are a very good compositional tool for guiding the viewers eye through the photo. Look for compositions with lines pointing towards the focal point of the image. The lines can be subtle, as in the photo above, or they can be strong and dramatic.

Diagonal lines take the eye through the photo to the subject. They are strong and dynamic.

Another type of effective line is an S curve leading towards the subject. S curves are more subtle than diagonal lines. They guide rather than force the eye towards the focal point. They meander around the interesting parts of the photo instead of going straight to the destination.

If something is recognisable, the eye goes to it. It doesn't matter if it's out of focus, or small in the frame. A pair of out of focus headlights in the background can be very distracting because they are recognisable and bright.

The sun is completely out of focus in your photo. But it's still recognisable – and your eye goes straight to it.

High contrast subjects have more visual pull than low contrast ones. The buildings in this photo have lots of contrast, helping them to stand out against the sky.

This is also a good principle to apply in post-processing. Instead of increasing contrast universally across the image, try increasing it just in the areas where you want the viewers eye to travel.

Putting It All Together

These principles are a little of an over-simplification – in most of the example photos above you'll see at least two factors contributing to the Visual Mass, possibly more.

Your job as a photographer is to figure out how the different elements in the photo are reacting within other. These principles are not strict guidelines – they are just a brief summary of how Visual Mass works. Think about them and they impact they have as you take photos.

Digital photographers have a significant advantage when it comes to pre-visualisation – the camera's LCD screen. You will appreciate this advantage more if you own a fairly new camera with a high resolution three inch screen. The quality of the image on these screens is amazing. If you have the time, check your photos on the LCD screen from time to time as you're taking photos. You'll often get a far better idea of how your compositions are working out from this than from what you see through the viewfinder.

If there's one thing that will improve the composition of your photos above anything else it's this – simplification. Eliminate everything that isn't necessary. Keep the background as simple as you can. Once you've done this, you can look at the remaining elements and think about how the eye will move around between them, according to the principles in this article. With time, this will become instinctive.

The principles of Visual Mass will also help you in post-processing to get the best out of your images. Some distractions, such as background highlights, are relatively simple to clone out.

But you can go further and think about which parts of the image you want to darken or lighten, where you want to increase the contrast, and whether to warm up or cool down the colours.

Use these principles to make your good images stronger!