The Art of Using Backgrounds to Create Moody Photos

Sometimes when you're taking a photo, you can be concentrating so much on your subject that you forget about the background. I'm sure you've seen the standard advice reiterated in photography magazines and books about avoiding lamp posts or other objects that appear to grow out of the back of someone's head. But have you ever really considered just how important getting a good background is to making great photos?

What is a background for? The background enhances the subject by setting the scene, creating atmosphere or providing environmental information. A poor background distracts from your subject and will ruin the photo.

A good background does the opposite. It works with the subject to make a great photo. If you do it well, the background can help add mood and atmosphere to the photo. It can help you capture the feeling or impression that you have of a place. Backgrounds help you be a more creative and expressive photographer by adding visual elements that enhance the subject.

Sometimes you may be faced with a photogenic subject but a poor background. In this situation you have a few options. You can change your point of view – it may be that looking up at your subject, so it is framed against the sky, may resolve the problem of a poor background. 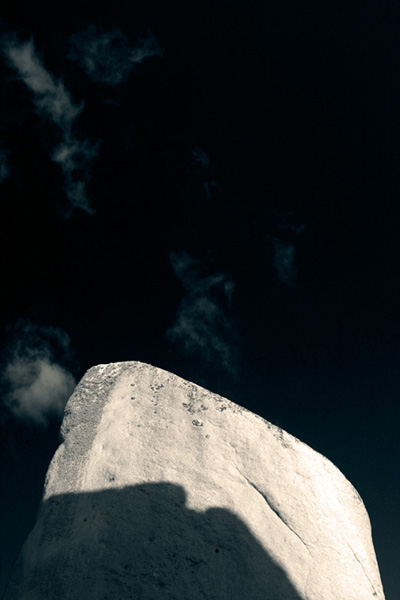 That's what I did with this photo taken at Avebury Stone Circle. By framing the standing stone against the sky, I've created a semi-abstract image that is free of distractions. I was forced into this approach because there were a lot of visitors to the stones at the time, making it difficult to take photos without people in the background.

Another potential solution is to use a telephoto lens, if you have one. This reduces the amount of background included in a photo letting you concentrate on excluding elements that are not relevant.

The Difference a Lens Makes 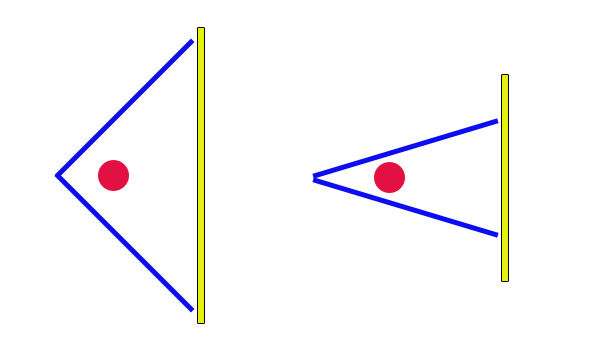 Take a look at these two travel photos. The above is photographed with a wide-angle lens. Because the lens includes so much of the background, it's hard to exclude distracting elements. That's not to say that you shouldn't use wide-angle lenses, plenty of good photographers do. The trick is to develop the discipline of making the backgrounds as simple, and as complementary to the subject, as possible.

The second is photographed with a telephoto lens. It was easy for me to isolate the girl against a background. The wall adds to the atmosphere by showing the setting – I photographed the girl in her natural environment. Anyone who has been to Bolivia, where the photo was taken, will be familiar with the architectural style of the wall behind her.

It's quite possible that none of these suggestions help, and that the only solution is to go and find a subject with a more interesting background, or to place your subject in front of a more interesting one (easy to do if you are taking photos of people, for example). Good photographers don't look for ways to fix poor backgrounds – they go and search for good ones instead.

I've been taking photos since long before digital photography was invented, and I have little patience with photographers who use Photoshop to do things like drop in more interesting skies or change the background.

This is lazy photography – and ironically will probably take you longer than making the effort to find a more interesting background in the first place. It is extremely difficult to create a photo that doesn't look photoshopped, thanks to the differences in lighting, colour temperature, contrast and so on between the subject and the 'fake' background. I don't recommend Photoshop as a solution for photos with poor backgrounds.

The first step to improving the background of a photo is to eliminate any distractions. The big thing to look out for is highlights. Bright areas draw the viewer's eye. If your background has bright highlights, the odds are that they are drawing the viewer's eye from your subject and photo loses impact.

The only things you should see in your photo are elements that add to the atmosphere or the message. If it shouldn't be there, then eliminate it. That's what I did in this portrait. I used a 50mm lens on an APS-C camera (so it behaved like a short telephoto – a perfect focal length for portraits).

A wide aperture blurred the background which helped keep it simple. But I also made sure that I included some crucial elements that help create mood – the standing stone and the greenery. Both are out of focus. This works because hinting at things leaves the viewer's imagination to fill in the gaps, and that helps create mood.

You often get bright highlights in the background when you are shooting in bright sunlight or in midday light. The solution is to shoot at the end of the day when light levels are lower, and the quality of the light is much nicer. At these times your background is more likely to be lit by soft light, which helps eliminate distracting highlights.

This photo of a dandelion was taken in soft light at the end of the day. There are no distracting highlights in the background. If the photo had been taken during the middle of the day, the sunlight would have created bright spots on the background and pulled attention away from the dandelion.

This background is about as simple as it gets – notice how the limited colour palette also adds to the mood of the photo. It is always worth thinking about the predominant colours. Green is a fresh, natural colour and is the perfect background colour for this photo.

Another way to create mood is to include dark areas in the background. Silhouettes and shadows lack detail. Just like out-of-focus backgrounds the viewer has to use their imagination to visualise the missing detail.

This photo uses that technique to create atmosphere. There is very little detail in the ruined building and the tree behind the girl. This is deliberate – the idea was to create an ambience of mystery. A similar technique is used in horror movies.

Lighting is an important element of mood. Backlighting is the moodiest lighting of all. Use it to surround your subject with light and capture the atmosphere at the start or the end of the day.

Here is another photo from the same shoot. I've used backlighting to create silhouettes and dramatic, high contrast lighting. I also used a flash positioned to the model's left to light her from the front, so that she didn't become a silhouette herself. 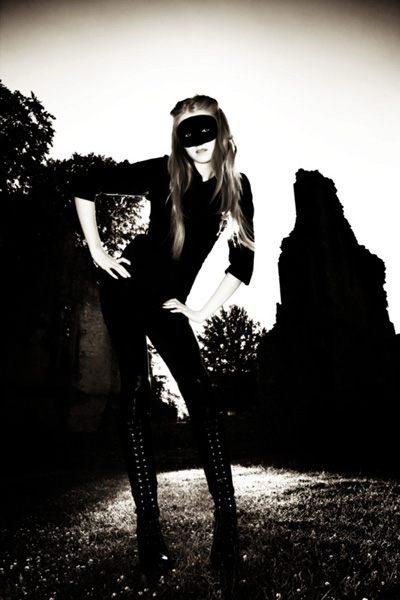 Areas of contrast draw the eye. If your background has more contrast than your subject, your eye will be drawn away from the subject and the photo becomes weaker. One way of avoiding contrasty backgrounds is to frame the image so that the background is either very dark or very light. Both capture different moods – dark backgrounds can be sombre and mysterious. Light backgrounds suggest sunshine and light.

This is another photo taken with a telephoto lens. The bright sun on the wall ceates a light background behind the girls. It's a highlight, but it's not distracting, because it's a large continuous tone. 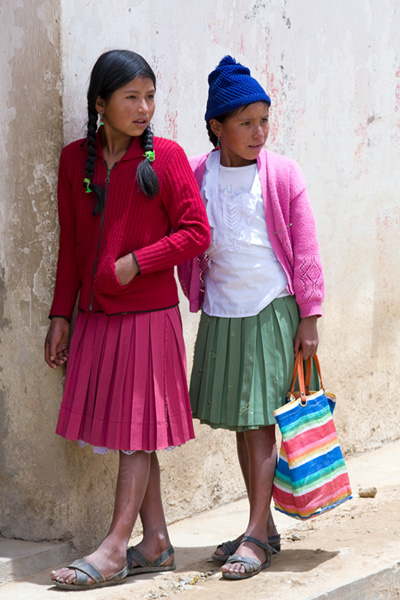 I took the opposite approach with the following. I like dark backgrounds – they are mysterious, moody, and work really well against light toned subjects like this flower.

Magnum photojournalist Robert Capa is credited with saying that if your photos aren't good enough, it's because you are not close enough. This doesn't mean that you have to get really close to everything you photograph though. Sometimes you should leave space around your subject.

Think of it as room to breathe – sometimes that space will provide a setting for the subject, such as a person in a landscape. The term for this is negative space.

This photo is a good example of the use negative space. The expanse of sky creates a backdrop for the rock formation and helps convey a sense of the atmosphere of the location. 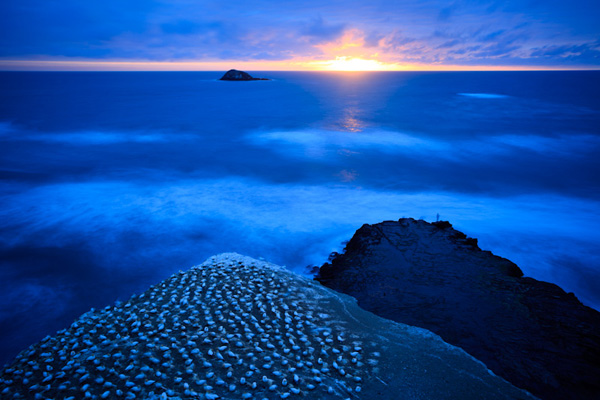 The background sets the scene. Here, the dominant elements of the background are the sea, the clouds and the sunset. The background captures the atmosphere of this place, situated on the edge of the ocean.

Another dominant element of the background, and the entire photo, is the colour. The colour cast is entirely natural. I set the white balance to daylight and the cloudy skies, in low light at sunset, gave a strong blue cast to the entire scene except for the sun setting between the clouds.

Wherever you go taking photos, whether it's a well known location like New York City's Central Park, or somewhere almost completely unknown, look for backgrounds that set the scene and also help capture the atmosphere of the place that you're visiting.

This photo taken in Central Park does that by including the skyscrapers of New York City in the background. 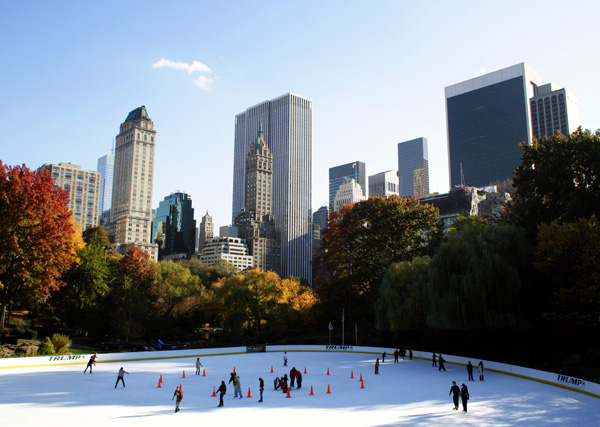 Here are links to some photographers on Flickr whose work I like because of the way that they use backgrounds in their work. It's well worth spending some time looking through their Flickrstreams to see how they implement some of the ideas I've talked about in this article. 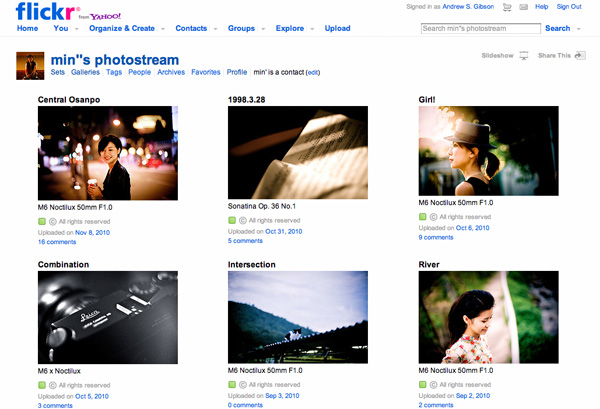 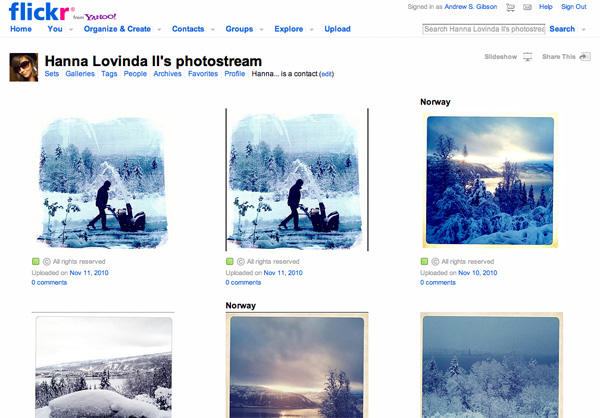 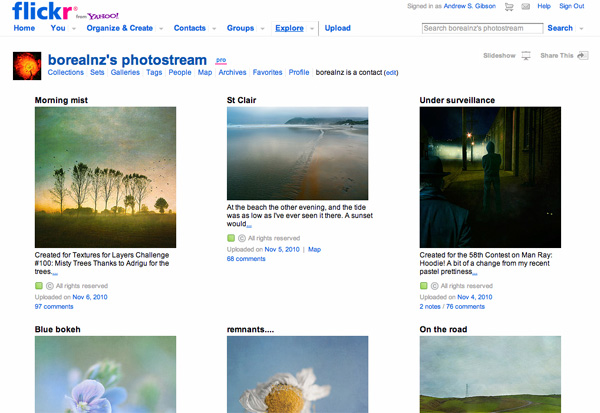