Surprised by a beautiful afternoon sunset over a field and caught without a graduated filter? You do not have to give up taking the picture. Your camera and a tripod will suffice. Today, we'll look at a simple technique to overcome high contrast situations.

Open Bridge and select the pair of images that looks best and send them to Photoshop.

Many people are so dependent on gear that they forget that we can get pictures without too much equipment. The image of a sunflower field published in this article is such an example. I came across this field on a late afternoon trip, going out for some night sky photography, and I had no graduated filter to reduce the contrast between the sky and ground. Should I give up and go home? Nope! 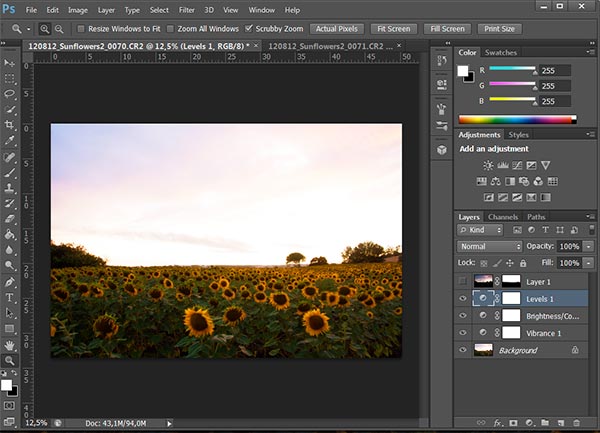 In Photoshop you create a mask for the top image (here the sky picture) and paint over it to reveal the layer below, that represents the ground.

In fact, there are different ways to solve this problem, and this is just one of them, a simple one, that everyone can use without much trouble. I am not even thinking about a HDR (High Dynamic Range) solution, I just wanted to get the shot. And the easy way to do that, in my book, is to shoot two pictures. One for the sky, so I got the rich colors that made me stop, and the second shot to get details on the sunflower field.

The darker image, with a good representation of the sky as I saw it. But the sensor on my camera can not "see" the sunflower field I also saw.

Purists will probably say that this is not photography. I don't care. I don't even think I am cheating. I am just trying to get the camera to show what I saw with my eyes. It's just the sensor that does not have the ability to see light the same way I do. In fact, the final picture, with an extra touch of color that I like, is what I saw. How did I do it?

To get details on the sunflower field I had to burn the sky, so most of the detail is lost. But in Photoshop I can fix that quickly, something that would take ages in film days.

First I took the two shots I mentioned, keeping the aperture constant between them (f/11), with exposures of 1/4 and 2 seconds. I took a few pairs, to be sure I had enough images to choose from, using a tripod and the camera with mirror raised up and the timer delay on 2 seconds. 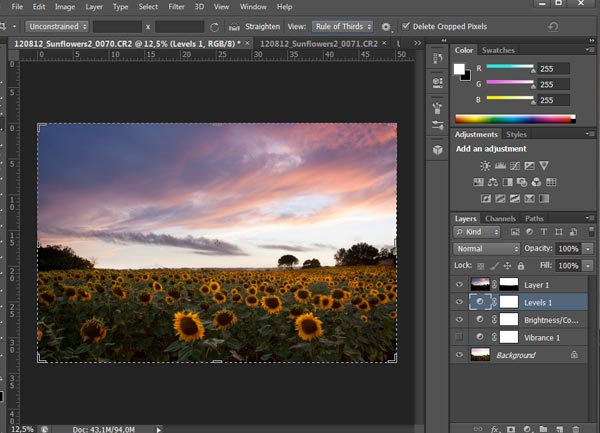 After processing each layer, this is the final aspect of the image in Photoshop. It's not an image created in Photoshop but a real representation of what I saw.

Once home I selected the images in Bridge and sent them to Photoshop CS6, stacked both layers in the same document, confirmed they're precisely aligned and created a mask for the top layer (the one with the sky), to paint the bottom area so as to reveal the ground. Once I had done that, I selected the lighter layer and adjusted the exposure, contrast and vibrance to get the sunflowers the way I wanted. After doing that I just had to do the same on the top level, to get a bit more vibrant colors in the clouds and sky. 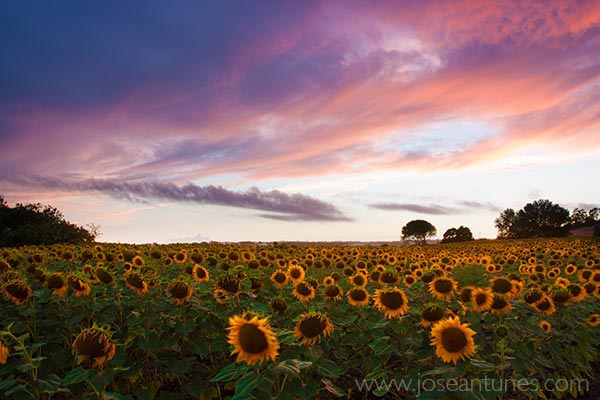 Sunset over the sunflower field in all its glory. A picture showing how easy it is to make better photographs if you learn to use your camera and the tools available.

After finishing working on each different layer, I merged them to save the final picture, which I sharpened a bit and that's it. A great late afternoon picture taken with just a camera and a tripod. Try this yourself and see how easy it is to create images that really show what your eyes saw and not what your camera registers. Remember this technique the next time you find a situation where conventional exposure does not let you get everything right in a single shot.