by Andrew Childress10 Mar 2012
Length:ShortLanguages:
Post-Processing
This post is part of a series called How to Use Noise Reduction for Silky Smooth Photography.
How to Use the Reduce Noise Filter in Adobe Photoshop

Noise is something that drives many photographes wild. In the pursuit of technical excellence, many shooters attempt to eliminate the presence of what I refer to as the digital era's equivalent of grain. Photographers chase many different solutions to eliminate grain, but my experience editing has shown that many photographers are missing the big secret.

First of all, let's make sure that you know what the term "noise" refers to in the photography world. Noise rears its head as a "graininess" in the image, with tiny dots characterizing "noisy" areas. Solid colored areas can look speckled or muddy. 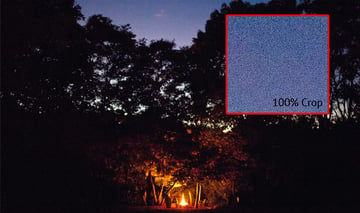 The image you see here is a great example of noise in a photo. Exposed at night with a high ISO setting, noise is apparent in a 100% crop of the sky.

Noise can be caused (and reduced) by a number of different factors. The setting most shooters consider when thinking of noise is ISO, or a camera's sensitivity to light. Indeed, there is a definite relationship between noise and ISO - as ISO is increased (providing higher sensitivity to light) so too does the amount of noise present in a photo. With modern cameras, high ISO's are more usable than ever, but increasing ISO still has the potential to increase noise.

Noise can be decreased with software such as Lightroom or Photoshop, or decreased by using the lower ISO setting as discussed above. Still, many photographers miss the most effective way to avoid noise to begin with. I discovered this issue while doing some editing for a friend of mine. He had shot his images at a low ISO, purposefully underexposing the photo with the intentions of bringing it back into proper exposure in Adobe Lightroom.

In reality, his technique was flawed; the most important part of avoiding noise is to properly expose within camera. I know, it seems like a basic piece of advice, but take a look at these images samples to illustrate the difference between getting an exposure right in the camera, and artificially increasing it in post production. The net effect of doing so increases the noise in the final image. 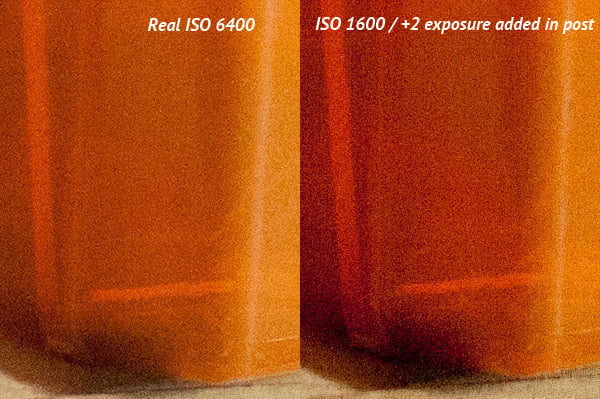 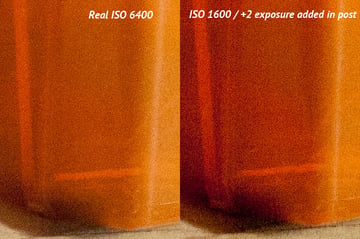 I shot this image test to illustrate the importance of getting your settings right in camera. On my Canon 5D Mark II, I shot two images: one photo at ISO 6400, and another at ISO 1600. The ISO 1600 was two stops underexposed, and I "added back" these two stops in Lightroom. As you can see, in the photo at right (the "fake 6400" shot), the noise levels are much higher than they would've been if it had been properly exposed at the higher ISO.

As you can see, having a low ISO setting means almost nothing if we end up adjusting the exposure heavily. If a photo is made at ISO 100 and requires two stops of exposure adjustment in post, we will have introduced a lot more noise than if we had exposed the initial image at ISO 400 (a two stop sensitivity increase).

Unfortunately, I'm afraid that there are photographers out there who aren't aware of this idea. If you're ever in a shooting situation where you're afraid to bump the ISO, don't hesitate and leave a photo underexposed. The net effect will be a greater amount of image noise.

From the above image tests, it's not hard to see that one of the biggest techniques in reducing noise is to properly expose the image. Unfortunately, this simple piece of advice is too frequently forgotten and overlooked in the "noise wars". If too much exposure adjustment is required in the editing phase, noise is going to become apparent regardless of the ISO setting chosen within the camera.