This article will dive head-first into the world of medium format photography. We'll take you through a basic introduction, then look at different cameras, film, scanners and processing techniques to give this type of photography a try!

Are You a Megapixel Junkie?

Do take advantage of affordable online printing to get poster-sized prints made of your dogs to hang over your mantle like a fine Rembrandt? Or maybe you just like to give great prints as gifts? Well then, I've got a surprise for you.

Digital photography is great, but when it comes to producing big, detailed images, nothing is better medium format film. Your camera may be 12, 15 or even 20 megapixels, but a medium format negative or slide can be 50 megapixels. In this tutorial, I'll show you why this old format still reigns supreme and I'll tell you how to get started inexpensively in the world of medium format. 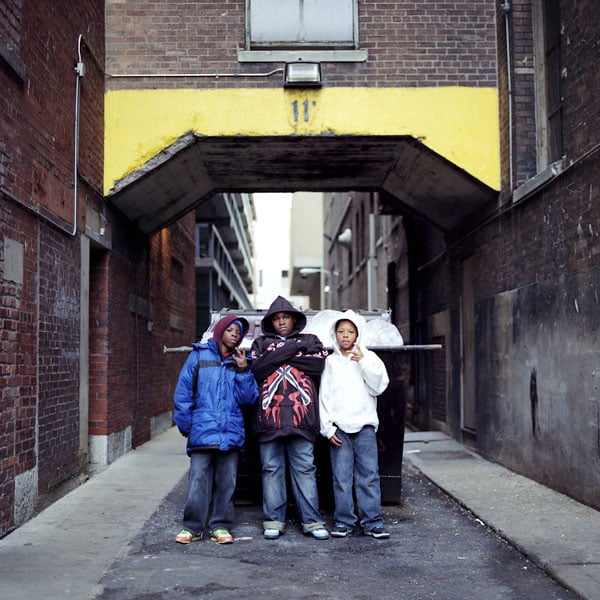 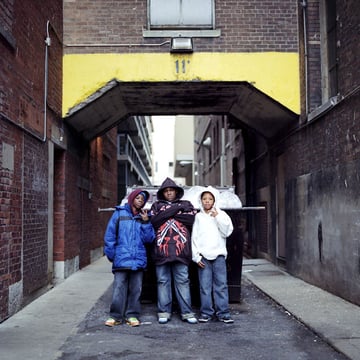 In the world of film, size makes all the difference. Medium format film is over four times larger than 35mm film. There have a been dozens of film formats over the years. Remember APS, or Advantix, or 110? Well, that's just the tip of the iceberg. Only two formats have really survived; 35mm and medium format.

I don't have a chalk board, so try to stick with me here. Let's say the average brand new DSLR is 12 megapixels. In a normal 3:2 format, that translates to almost 4,300 pixels on the widest side of the image.

My cheap film scanner will scan a 35mm negative so the wide side is 6,300 pixels. This means that, in theory, a 35mm negative is 26 megapixels. But if you take into account the grain of different film speeds, it's really not that large.

My cheap film scanner will scan a 6cm x 6cm negative at over 10,000 pixels across one side. That's over 50 megapixels. There are a few digital backs and medium format-style digital cameras that can shoot 50 megapixel images, but they cost over $20,000 USD. The image below is a 100% crop of the previous image. You can actually count how many windows were in room by using the reflection in her eye.

If you know cameras, you're probably laughing right now. What about film costs, you say? What about processing costs? What about scanning costs? Not to mention, a Hasselblad body alone can cost $3,000 USD.

Don't worry. Let me break it down for you. There are a variety of great, fully functional medium format cameras available, new and used. I got a great deal on mine. It cost me around $250 USD. My Epson 4490 scanner, which scans 35mm and medium format, cost less than $150 USD. So, I have got about $400 USD invested. The $19,600 USD that I saved will pay for a lot of film and processing. Below is a photo produced with the very affordable Bronica SQ-A. 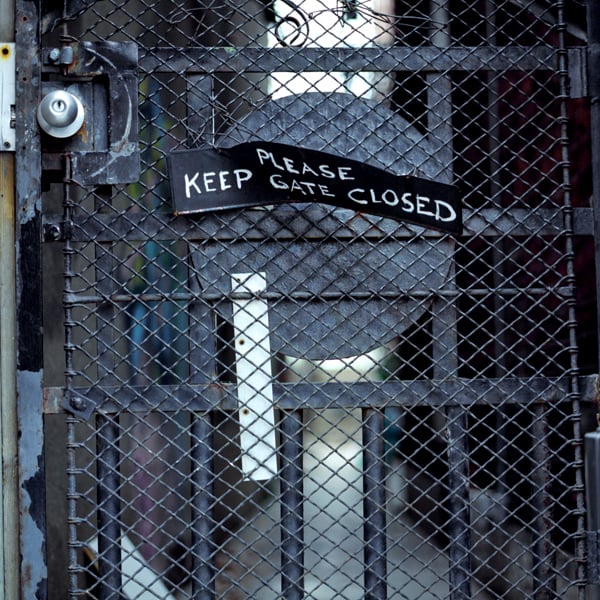 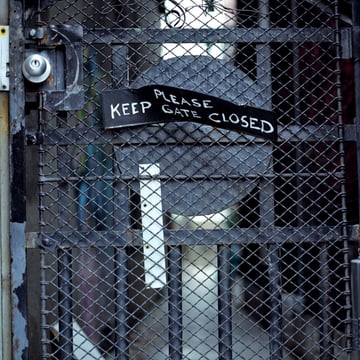 I've already mentioned some of things that you need to get started with medium format. You'll need a camera, of which there are a wide variety. You'll need film. You may need a handheld light meter if your camera doesn't have one.

Another important thing to consider is that you're going to need to find a place to process your film. If you live in a big city, there may still be a lab that does it. If you aren't that lucky, you can do some online research and find a mail order processor.

Finally, you'll probably want a scanner to transfer your negatives or slides to your computer. Below you can see how medium format film compares to 35mm film. 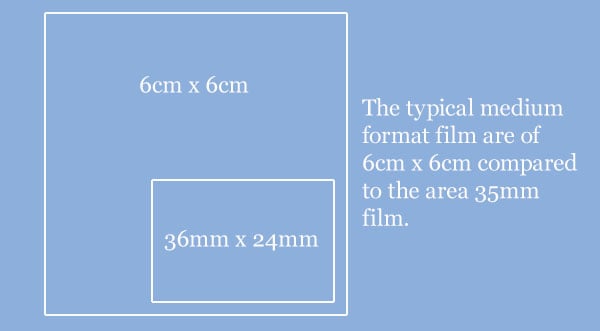 The camera will be the biggest chunk of your investment. The first thing to consider is whether to buy new or used. This will mostly depend on your budget. In terms of new cameras, Hasselblad, Rollei and Mamiya all still make high-end medium format cameras. When looking for lower end cameras, consider Seagull or Kiev.

For used cameras, look for all those brands plus Zeiss, Yashica, Bronica and Moskva. Of course, there are also the inexpensive Dianas and Holgas as well. KEH, B&H, Adorama and Lomography are all good places to start looking for both new and used cameras of all types. The camera pictured below is a Zeiss Nettar 515-2 folder. It created huge negatives and can be obtained quite cheaply. 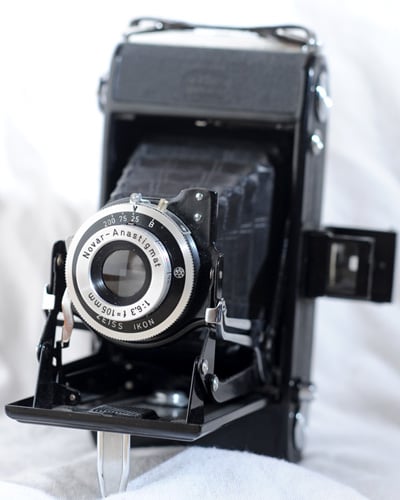 There are several different types of medium format cameras. The TLR (Twin Lens Reflex) camera has two lens. One for focusing and one for taking the picture. These are the cameras you look down through the top of to see. These are the cheapest kind of “professional" cameras.

The main disadvantage to these cameras is that they have a fixed lens, meaning you're limited to the one focal length lens the camera comes with. Seagull (inexpensive) and Rollei (very expensive) still produce these cameras. Used Yashicas can be found easily for a good price, and Mamiya produced the only interchangeable lens TLR. Below is my Yashica 635, which has the ability to also shoot 35mm film with a special adapter. 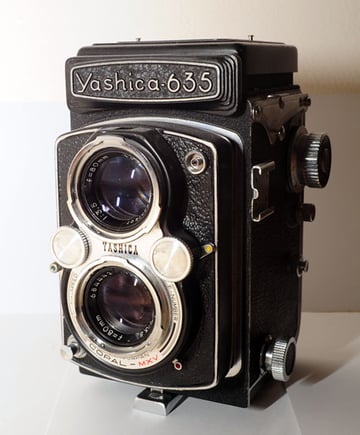 We all know what an SLR (Single Lens Reflex) cameras look like. They are the most prolific and common type of advanced camera available. But medium format SLRs can look a lot different. Depending on your budget, I would look at a Bronica or Hassleblad SLR. The Bronica is what I purchased.

When buying a kit, you'll need to buy many pieces because the systems were designed to be highly customizable. My kit (lens, body, viewfinder and film back) was very affordable. Hassleblads on the other hand are infamous. They are highly sought after and expensive. They are also the only cameras that have ever been to the moon. Below, you can see my $250 USD Bronica SQ-A kit complete with an 80mm lens, waist level viewfinder and 120 film back. 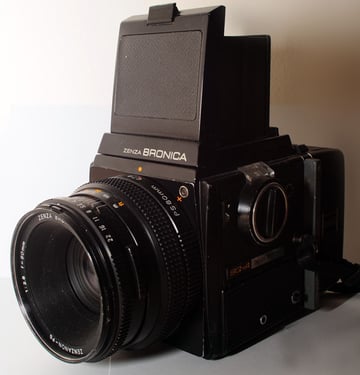 Unlike 35mm film, bulk loading is pretty much out of the question. So you'll be buying single rolls of film. The SLRs with interchangeable film backs make specific backs for 120 and 220 film, so make sure you get the right film for your back.

If you have a different kind of camera, then be sure to check the inside for film compatibility information. If there isn't any information available assume that it uses 120. Most 35mm film types are also available in 120/220. So pick what you're comfortable with. A 400 ISO color negative is usually a good place to start.

As I mentioned before, getting medium format film developed can be a challenge. If you're shooting black and white film, I would suggest developing the film yourself. There's a great tutorial on this site about developing Kodak T-Max film.

Developing color film can also be done at home, but the temperature tolerances need to be tighter. Most developing labs will be able to send out medium format film for you, but it will cost quite a bit. Sending the film yourself will save you quite a bit of money. So doing some online research will really pay off. 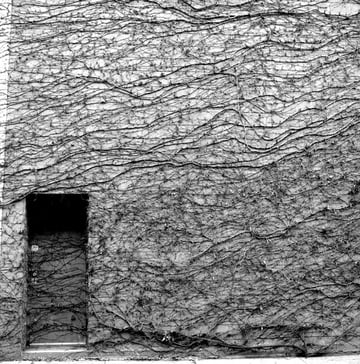 In order to scan your film, I would highly suggest getting a flatbed scanner with a light in the lid. There are several models from several different manufacturers available. There are dedicated film scanners that accept medium format film, but they are really expensive.

The flatbed is a solid option and will yield wonderful results. The Epson 4490 that I own will allow you to scan film strips up to 12 cm long, meaning that it will accept negatives from some of the more interesting medium format cameras. Just look for flatbed scanners that are labeled “photo" or something similar. It should be pretty easy to determine whether it will scan film or not. The image below is an extra long 6cm x 9cm negative produced by the Zeiss camera pictured above. 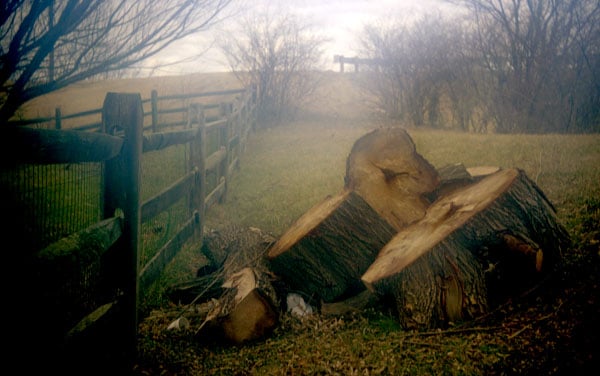 In terms of value, it's really hard to beat a good medium format film camera for clarity and resolution. Because the demand for film cameras has fallen so dramatically, used cameras can be obtained for a fraction of what they cost new.

And the fact that companies are still dedicating resources to produce new versions of some of these cameras is a testament to the quality and desirability of the images they produce. If you don't mind the size, there is really no other way to get so much bang for your buck. 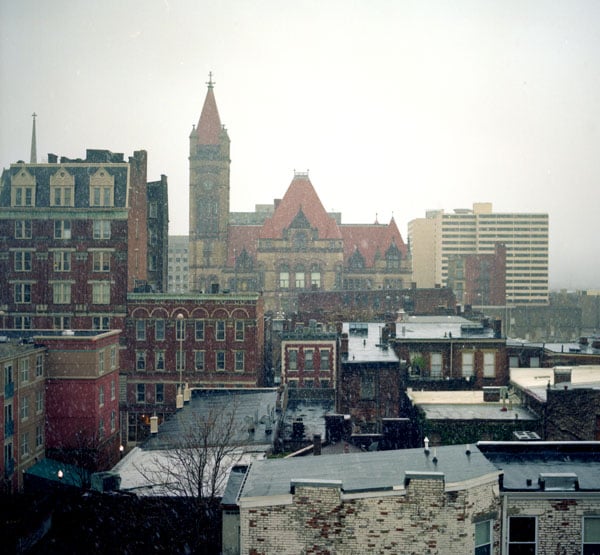 Medium Format CameraFilmCamera SelectionFilm Camera
Did you find this post useful?
Yes No
Would you like to provide feedback (optional)?
Cancel Submit
Want a weekly email summary?
Subscribe below and we’ll send you a weekly email summary of all new Photo & Video tutorials. Never miss out on learning about the next big thing.
Sign up