I've noticed around the internet that a great many people struggle with foliage. A large number of people don't even seem to notice that there's an issue, which is unfortunately falsely backed up by the legions of commenters trying to be nice rather than truthful. The problem persists for all levels of photographers, from year one amateurs to multi-year pros.

It's not really surprising that this is the case. I've also struggled with foliage and often still do. It's a very complex pattern covering a fairly wide dynamic range and it completely changes colour, from orange to nearly blue, depending on the lighting conditions.

It seems to me that photographers go out to try to capture beautiful, sun-dappled foliage, or HDRs of green hills and open woods, or leafy forest streams. They get these shots back on the computer at home and somehow, they just don't look like they remember.

They recall the mix of smells, loam, pollen and resins, the streaming sunlight and the gentle breeze, the singing birds and the tickling water. It all felt so alive, so green. In order to try to visually portray this emotional memory, they then ramp that saturation slider way up to match the heightened stimulation of the outdoors. 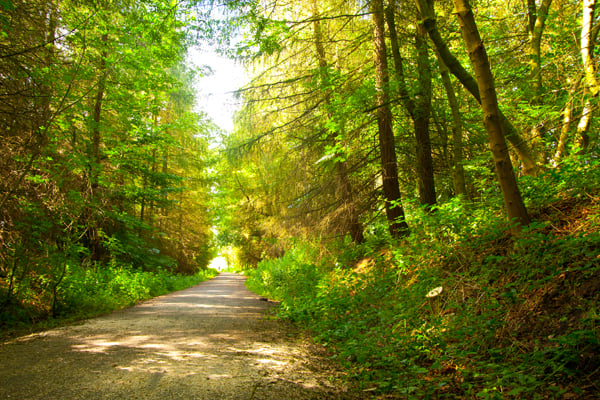 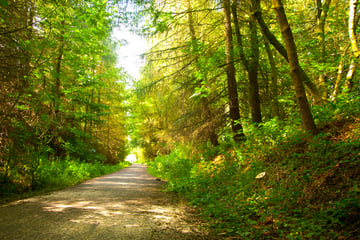 Summery? Maybe. Horrifically yellow and oversaturated? Definitely. Taken at the wrong time of day? That too. Unfortunately, many would consider this a nice photo.

We all know tonal clipping, where the highlights or shadows exceed the recordable dynamic range of the sensor and are unrecoverable. Saturation clipping is similar, except that it's usually recoverable as it's introduced in the post-processing phase. 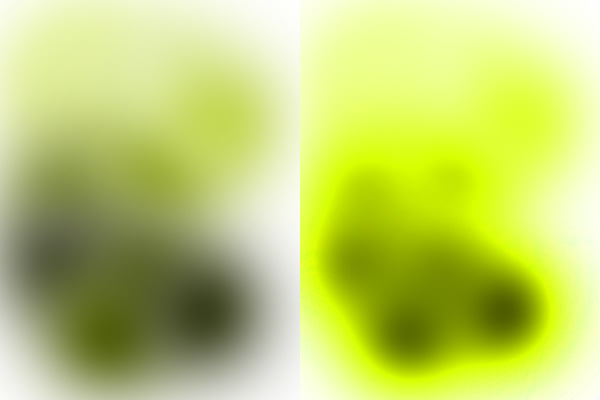 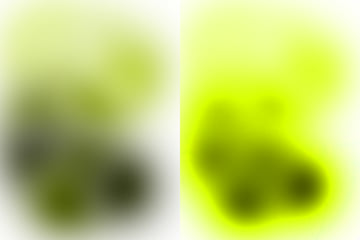 Example with soft brushed gradations. This is only a 63% saturation increase, but the clipping is quite evident.

Normally-saturated tones are pushed further up the saturation scale of the hue-saturation-luminance (HSL) spectrum, creating a much brighter, bolder image. Unfortunately, the wide range of tones which the camera records are compressed into a single line of high saturation which only varies by luminance.

Anything falling outside this large range becomes a different hue, and so you end up with blocks of one colour and then blocks of another slightly different colour. 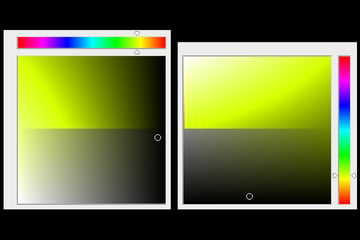 That line across the gradient is saturation clipping, as everything is forced into a tiny color palette.

In reality, these were a wide scale of varying hues and tones. Because ramping the saturation causes an entire saturation-row to move to the right end of the HSL spectrum (above), what may have been subtle and circuitous gradations in the original image are forced into blocky, awkward jumps as the software enforces the rule regardless of context. 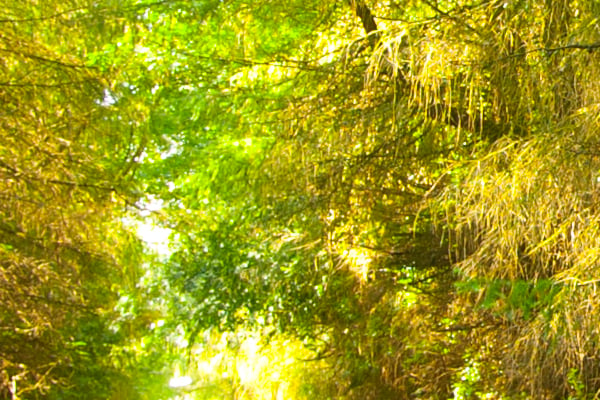 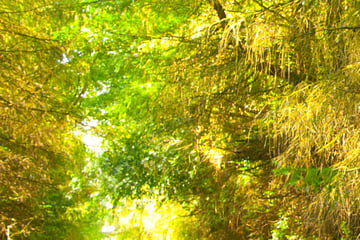 Center crop; the hard edges and blocks of color are very visible. Sadly, I've seen many a portfolio shot looking like this.

What can one do about this ugly yellow leaves problem? There are actually two options, depending on whether you've already taken the shot or if you're planning on going out. If you've already taken the shot and you're onto the post phase, obviously the first step is to lay off that Saturation slider. In fact, stop touching it altogether. Use only the Vibrance control because this will prevent any saturation clipping, even when set at 100%. That's the difference between the Saturation and Vibrance sliders; Vibrance also controls the saturation, but prevents your image looking like a badly processed HDR. 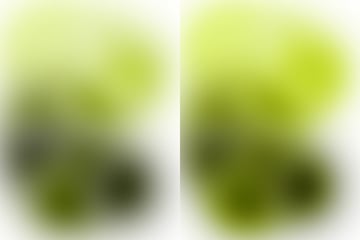 This is 100% Vibrance. Big difference here.

Once you're moderating the oversaturation problem, there's still the problem of yellow leaves to attend to. Let's take this reject image from the beginning of the article: 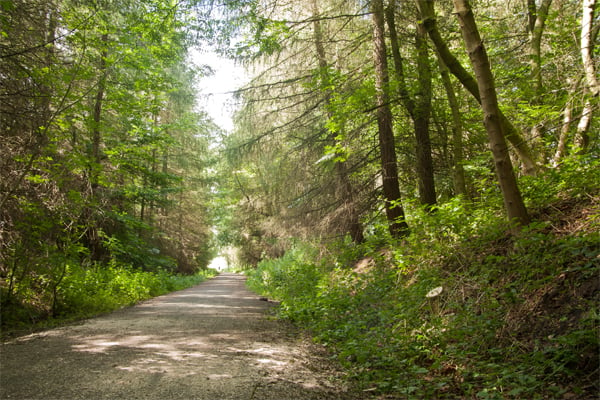 Nothing special, but a useful example. I'm going to work it in Photoshop CS5.

This is very easily solved, however. In Photoshop, go to the Adjustment Layers icon in the Layers Palette and click on "Hue/Saturation." In the dropdown menu, switch from "Master" to "Yellows." In Lightroom, simply scroll to the HSL/Color/B&W adjustment box in Develop and click on "All." Drop the yellow saturation down a little way, somewhere between 10 and 30 percent is usually about right but it really depends on your image. Surprised by how much of an effect the yellow slider has on supposedly green leaves? Yeah, me too when I discovered it. 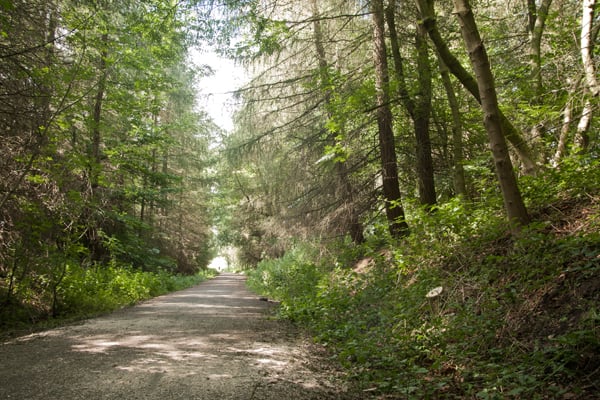 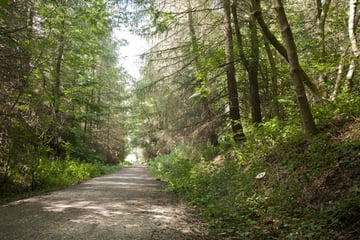 Minus 27% saturation in the yellows on an Adjustment Layer.

Once you've desaturated the yellow a little, move the yellow Hue slider along towards the green end, away from the orange end. This doesn't usually need to be very far, about 10-25° is what I tend to use. You'll see the leaves suddenly come alive in an explosion of verdancy.

Boom! Horrible over-sunned foliage is now the color I want it to be in just a few seconds. The result of +15° Hue in the yellows.

From there you can adjust the level of saturation and hue adjustment to taste. Just be very careful of taking them too far. You don't want aquamarine leaves unless they were that colour in the first place, for example, and it's easy to make it all look computer-generated.

More detailed retouching work is beyond the scope of this article, so I'll leave it there. But there will likely also be some curves work to do, using an inverse S-curve with masking to reduce some of the local contrast.

You'll probably also want some dodging and burning and colorizing work to recolor some of those areas where the highlights lost detail and are now light grey from the curves adjustment. Then some general tidying up like denoising the shadows. Don't expect this technique to work miracles, however. There's no substitute for good light.

If, on the other hand, you're reading this before going out shooting, I have good news and bad news. The good news is, your images will look better than rescuing them in post. The bad news is, you're probably going to get wet. Sunshine, contrary to popular belief (or at least, popular convenience), doesn't produce the best nature and landscape photography.

So yes, I'm here to tell you that not only should you be losing sleep by shooting at dawn and dusk, but you should be shooting on miserable damp days as well! Remember, the top surface of a leaf is shiny to reflect heat, but it reflects a lot of light too. Foliage can be just as difficult as metallic objects, but in this case you're trying not to make it look reflective. 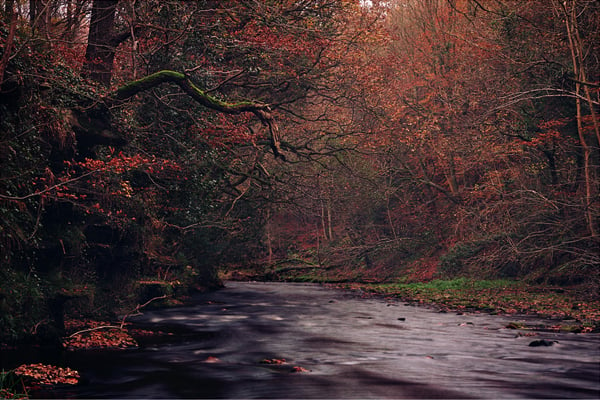 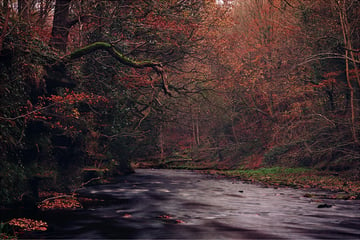 Although this is a graded final product, you can see the quality of the overcast light apparent. Fall leaves are just as reflective and yellowy.

That said, you don't want it to be too miserable. Heavily overcast skies will diffuse the light to such flatness that without heavy rain or fog for depth, the foliage will tend to want to become an indistinguishable two-dimensional mess, photographically little better than the horribly noisy foliage you get on sunny days.

From shooting in a wide variety of light levels and weather conditions, I've personally found that the ideal seems to be a fairly light steady drizzle from thin-to-moderate cloud cover, allowing light through reasonably directionally, but well diffused through both cloud and rain.

At the heavier end, the rain can sometimes create an added misty effect for better depth in your images. This kind of weather should provide good dimensionality, stronger, truer colors, and a more limited dynamic range than clear, sunny days. 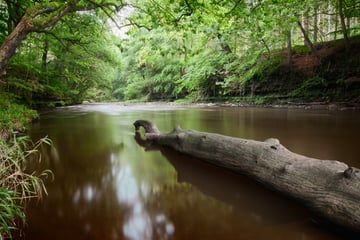 There's no saturation work on this at all, only tone and contrast. Pure product of summer showers.

That compressed dynamic range is excellent for contrast management; the lower contrast of wet weather compounded with the low contrast of RAW shooting is fantastic for retaining data to be able to really perfect your shots in post.

The reason to shoot at dawn and dusk is, of course, to soften the light as it gets scattered through more atmosphere. Unfortunately, depending on the type of shot you want, that light may be completely wrong.

You'll get beautiful golden liquid lighting across your landscapes, certainly. But for green verdant nature shots, that golden light is going to be a headache in post as it lances through your images, turning your leaves from green to yellow and white. So be well aware of what you're aiming to get and use the weather accordingly.

There are several things to be aware of here when you're shooting outdoors, but the main concept I'm aiming to convey here is that lighting awareness is just as vital for nature shooting as it is for, say, portraiture.

Know your target and wait for the corresponding light rather than just rolling with whatever you're given, which could easily be bad light. Or, even better, have several targets requiring a variety of light types so you have something to shoot regardless of weather.

Rob Taylor
Rob is an English artist and writer living in the US, in the process of transitioning out of his comfort zone of nature photography towards more commercial work. He's usually around on Twitter.
robtaylorcase