How to Shoot a Mysterious Levitation Photo

If you're looking to bring some magic to your next photograph, today's tutorial is going to help you do just that. With some creative planning and easy post-production, we'll create a levitation photo that seems to break the laws of physics.

Before we dive into shooting our levitation images, let's discuss how we can put together this effect. If you're thinking that it requires Hollywood magic or advanced Photoshop skills, I think you will be surprised how easy it is to put this image together.

To create a levitation photo, we will capture our subject standing on a stool, and then remove the stool in the editing phase. It's a simple process with a stunning outcome. 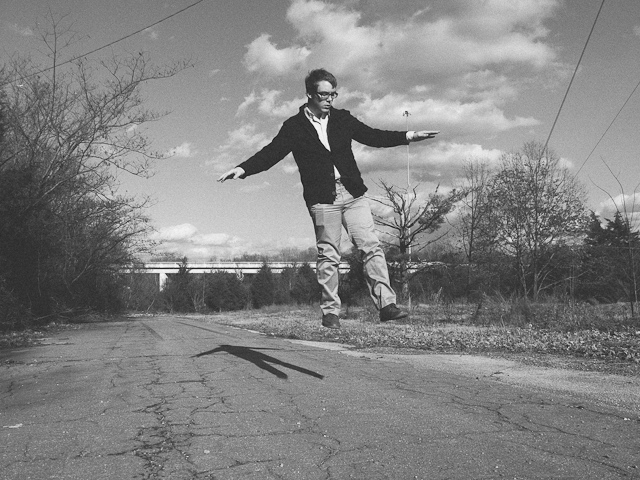 This is another image we captured during production of this tutorial. The sun provides a great shadow that enhances the levitation effect. Although the effect is unique, the work involved with producing it is easy for even novice photographers to tackle.

Choosing the Time for the Shoot

I worked with my friend Forrest Lane to help me create these images. Forrest is a talented photographer who can make the most of creative ideas. As we planned this shoot, we knew that the best results would mean using a sunny day that casted a shadow from the subject's body. This would enhance the floating effect and enhance the sense of depth. We chose two days to produce these images, and the sunny images were definitely superior.

These are the two images we will be combining to create a levitation image. We need to capture the scene without our subject or the stool, and then add them in for a second image.

Getting the final, levitated image means snapping two shots then combining them in the editing stage. Using a tripod for this technique is essential. The two images must be perfectly aligned. The process is pretty simple, and with a bit of planning it takes only a few minutes to snap the two frames that we need.

As we mentioned, you'll want to use a tripod from the get go. It is simply much easier to make sure the images are aligned while shooting instead of attempting to align them in the editing stage later.

The first of these images is the environment with no subject or stand. We do this so that we have a canvas we can use later. I recommend doing a little rehearsing with your subject placing him where you want him then removing everything from the scene. 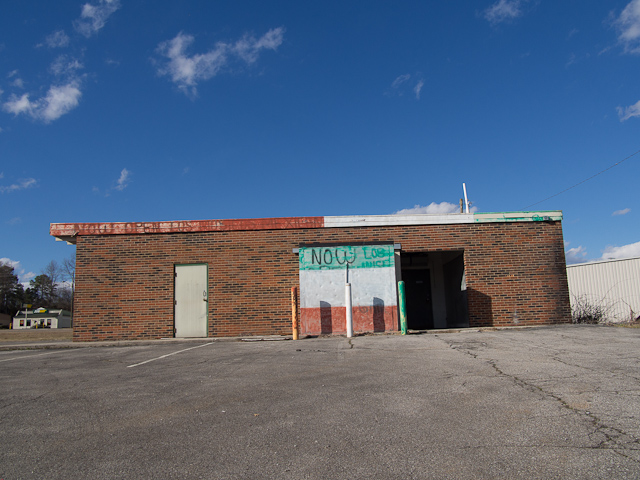 The first frame will just capture the scene. We will be painting out the stool later and we need the background to use for that process.

As we mentioned, you'll want to use a tripod from the get go. It is simply much easier to make sure the images are aligned while shooting instead of attempting to align them in the editing stage later.

After you've shot the scene, go ahead and add in the subject on the stand. For extra visual intrigue, have the subject doing something interesting with their body. Unbalanced and dynamic poses will help capture your viewer's attention. You might try having them spread their arms and have a leg lifted off the stool. 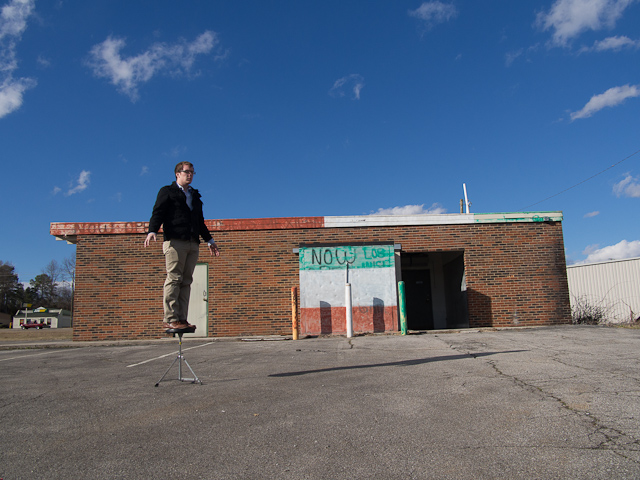 In the second image, we added Forrest standing on his drum stool.

Be Careful with Your Angles

One thing that Forrest noted while we were shooting is that it was impossible to shoot from a really low angle. Think about looking up at someone if you're sitting on the floor and they're standing on the a table. You wouldn't be able see their feet or legs. The same applies to the stool.

To avoid the low angle problem, be sure your camera is higher than the top of the stool. You can set up your tripod right next to the stool to get the height as low as possible if necessary.

By utilizing the lowest angle possible, you exaggerate the height of the person making them appear to be floating even more. Conversely, if you went with a high angle, you might not be able to tell the person is off the ground at all.

Two images later, we have everything we need to put together the levitation image. The process can be as creative as you envision.

It would be great to put together this shoot entirely in-camera, but some post production is required to get this right. That tripod use is about to pay off. If you did everything right, the only difference between the two frames should be the subject and the stool.

Even if you're not a Photoshop expert, the editing phase of this tutorial is pretty easy to tackle and requires basic knowledge. One concept that's important to understand is the Photoshop system of layers. Many beginners get overwhelmed by managing layers, but we need only two layers to recreate this effect. If you have another layer-based image editor, you can certainly attempt to recreate the effect in it.

The first thing to do is open both images in Photoshop. Once you have them open, you'll want to get them into the same file, as two different layers. Let's walk through this process.

We need to place the image with our subject on top, so take it, select all, and copy it. You can go to the Select menu and choose all, and then Edit > Copy to grab the image. Next, paste it on top of the "scene only" photo. 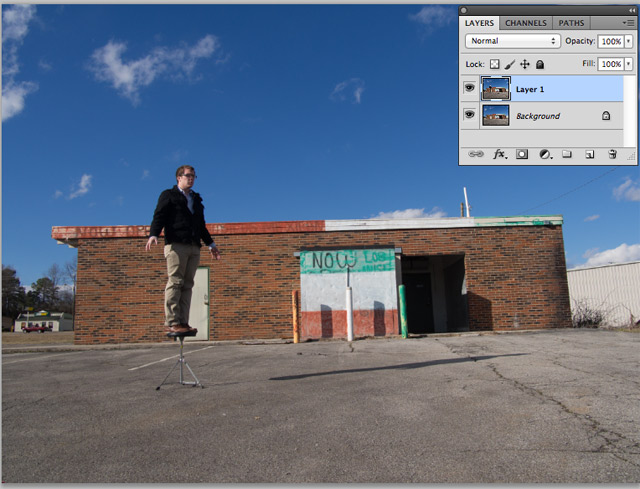 This image shows how you should position your layers. Keep in mind that once you've done this, the background layer with just the scene will be obscured by the top layer.

Using layer masks is like cutting a window to a layer below.

In Photoshop, I use layer masks to make this process easy and non-destructive. To add a layer mask, go to the Layer menu and choose Layer Mask, then choose "Reveal All". This adds a layer mask. You won't notice a change in the image, but if you look at the layers palette, you can see that a white box is shown next to the layer. 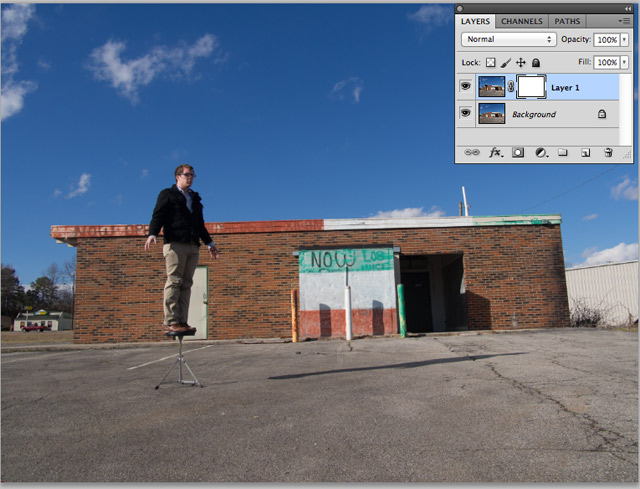 In this photo, you will notice the layer mask added to the layer palette. The image won't change, but you've performed this step properly once you see this in the layers palette.

With the layer mask added, we can very simply paint out the stool. Using layer masks is almost like cutting a window to a layer below. Go ahead and select a brush from the tools, and make sure you are painting in black.

You can vary the size of the brush and hardness of the edges to get this just right. This can be a bit tedious but because we're using layer masks, no mistakes are final. All we have to do is switch to a white color for our brush, and we can paint back to the original scene. 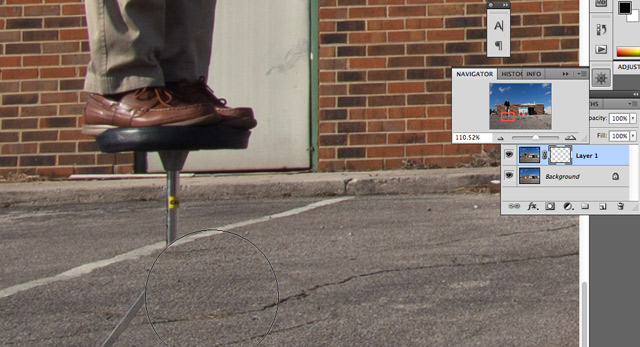 After we get the layer mask applied, the bulk of the work in this tutorial is "painting out" the stool. We use a white layer mask with a black brush to paint the top layer out, and now the background shows through.
If your brush is just painting black blobs on the image, you're no longer working on the mask itself. On the layers palette, make sure you click the white box and then you'll be working on the mask itself again. Keeping the layer mask selected and working directly on it is very important.

Some photographers would claim that just erasing the top layer is a more simple way of achieving the same effect, but I much prefer the non-destructive capabilities of layer masks. If we make a mistake, it's much easier to correct it, even if we notice it much later. This is why I stick to layer masks. 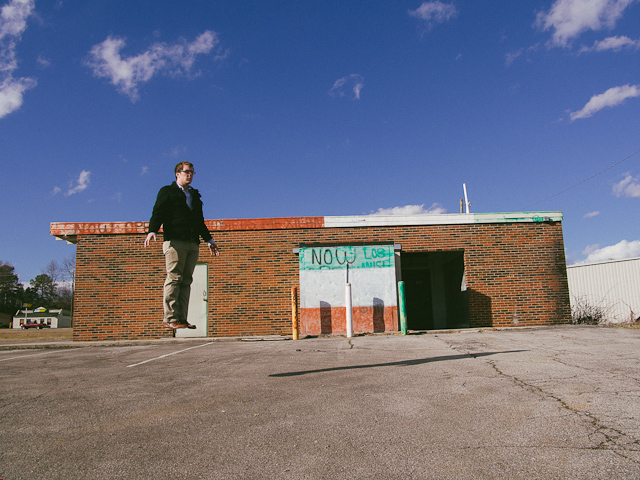 The final image features our subject floating. The sun provides a shadow that really enhances the effect, putting space between the subject and the ground and giving a sense of depth to the frame.

In just a few minutes, you can paint out the stool. We ran into a minor issue using the drum stool because the softness of it would cause the subject's shoes to sink down in the seat. This covered the bottom of the shoe. Again, techniques such as these require lots of practice and experimentation to get it perfect. To eliminate this issue in your own shoot, just use a stool or step ladder with a hard surface on top.

This technique uses a combination of careful shooting and precise post-production to create an effect that can really capture your viewer's imagination. With some careful planning and simple post production, you can achieve what appears to be a complex image.

Have you tried this technique to achieve a levitation photo? Check in with a comment to let us know what you think.

CompositingAdobe PhotoshopShootingLayer Masks
Did you find this post useful?
Yes No
Would you like to provide feedback (optional)?
Cancel Submit
Want a weekly email summary?
Subscribe below and we’ll send you a weekly email summary of all new Photo & Video tutorials. Never miss out on learning about the next big thing.
Sign up

Andrew Childress
I believe that life is too short to do just one thing. In college, I studied Accounting and Finance but continue to scratch my creative itch with my work for Envato Tuts+ and other clients. By day, I enjoy my career in corporate finance, using data and analysis to make decisions. I cover a variety of topics for Tuts+, including photo editing software like Adobe Lightroom, PowerPoint, Keynote, and more. What I enjoy most is teaching people to use software to solve everyday problems, excel in their career, and complete work efficiently. Feel free to reach out to me on my website.
Scroll to top
Looking for something to help kick start your next project?
Envato Market has a range of items for sale to help get you started.