How to Make Superb Subway Imagery

Subway stations are really a world of their own. Underground, dark, gritty, sometimes filled with masses of different people and sometimes deserted, they’re a photographer’s dream for capturing a unique angle of urban life.

Today we’re going to take a look at a few tips on capturing incredible images in underground subway stations.

Think about how many people are coming in and out of the subway station every hour. There are certainly times and stops that don’t get massive crowds of people, but go anywhere like New York, London, Paris, or Tokyo, and you’ll find swarms of people perfect for interesting photography in the subway.

You’ll get the regulars - the people who take the subway everyday. They’ll be the ones sleeping, listening to music, reading a book. Plus you’ll find tourists, families, musicians and more. Pretty much everyone from every walk of life can be found using the underground stations for transportation.

The variety of unique characters is literally endless. And the subway is such a great place to capture real human emotion. That’s because people aren’t there to act a certain way, and they’re not working or comfortable at home.

They’re all there to get somewhere, nothing else to do. Boredom, tiredness and excitement all show up and it all makes for great photography.

As a photographer, you’ll never be without an interesting subject. Use this environment to capture the lifestyle of the people, their emotion, and their “story." 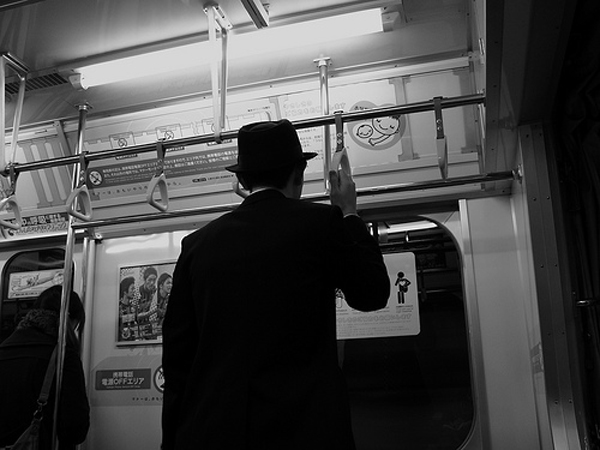 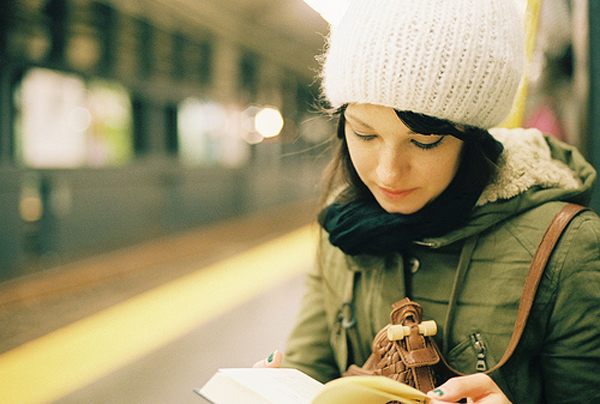 Although you can use a variety of wide or zoom lenses, a great lens to choose would be a 50mm prime. The sharpness this lens achieves is perfect for the low-light underground.

It’s also a good lens to use for the close proximity to people riding the subway. Because of the wide aperture of prime lenses, you can get super sharp images in low-light without having to sacrifice the shutter speed or ISO.

But, the only limit is your creativity. Even a fisheye lens could be an excellent choice for maximizing what you can capture in one frame because of the extreme wide angle it achieves. 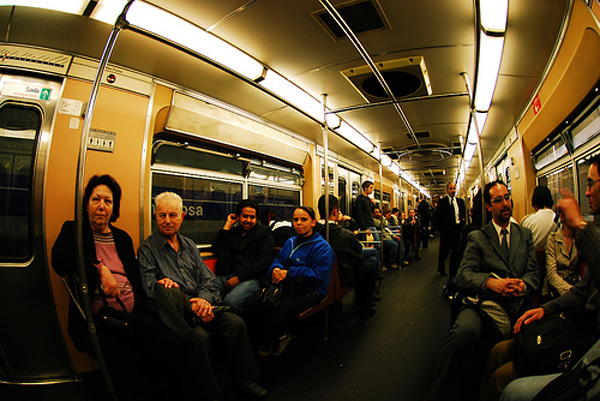 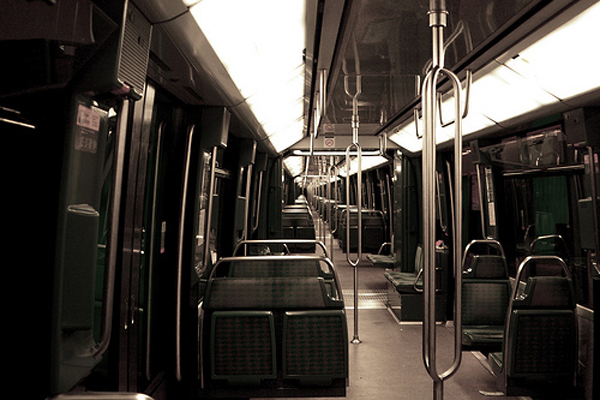 Subways are of course underground places, so the light you’re going to get will likely be fluorescent. Usually photographers tend to stay away from this harsh kind of light, but in a subway station it’s perfect for capturing eerie urban scenes.

Fluorescent light is often very bright, but in a subway you’re still going to see a lot of darkness. The contrast of such opposing light levels is excellent for shooting photos that are unlike anything else.

Setting Up A Shot 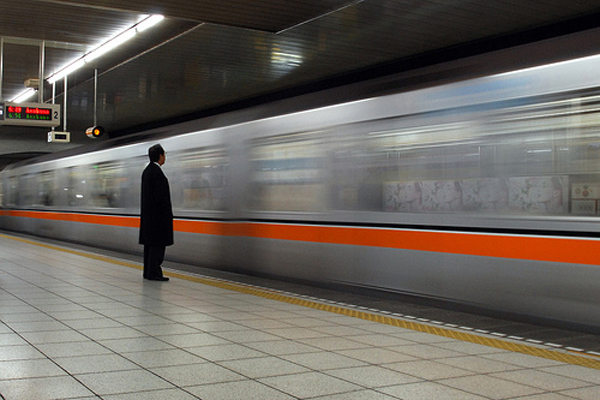 The photographer spent several hours trying to get a photo like this one. Photo by Tinou Bao

The subway isn't always an easy place to take pictures. A crowd of people bumping into your tripod or a lack of good light can definitely make things a bit difficult. But that’s what makes it so exciting. The kind of energy you capture is something that can’t be directed or controlled. It’s best to just embrace the chaotic energy that’s likely to occur.

If you’re familiar with street photography, you’ll understand that getting a good shot means anticipating what’s to come. Before you set up your tripod, look around and observe.

Look for where people enter the train doors, look for signs on the walls, look for lines of architecture. Then compose your shot based around these elements. Move onto the next location once you feel you’ve captured a good variety of shots, each with different people and different techniques used.

Don’t give up and move on if you feel you aren’t getting anything good. It often takes a while to really feel comfortable with where you’re shooting. It’s okay to stand in the corner of the station or stay riding the train until you achieve what you’re after. Eventually you’re going to come across a few perfect moments. 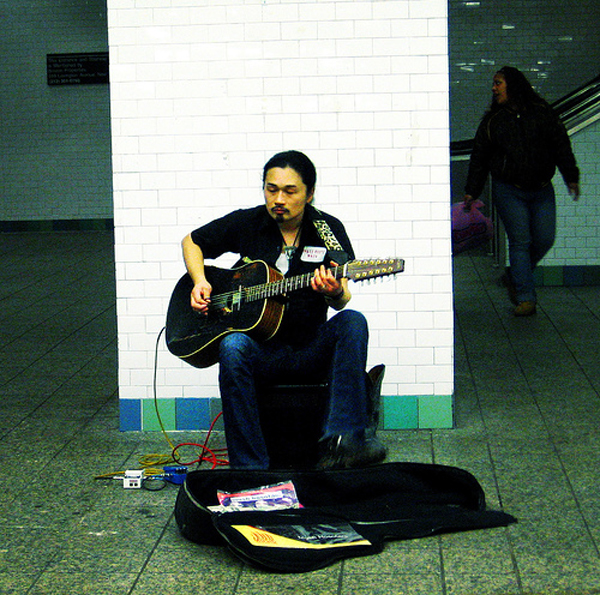 Believe it or not, musicians playing in the subways is a common thing. From solo guitarists to five-man rock bands, look out for musicians when venturing into the subway and thinking of potential shots. It's not exactly concert photography, but it’s something else. A kind of street music photography perhaps.

Be Candid and Shoot Candidly 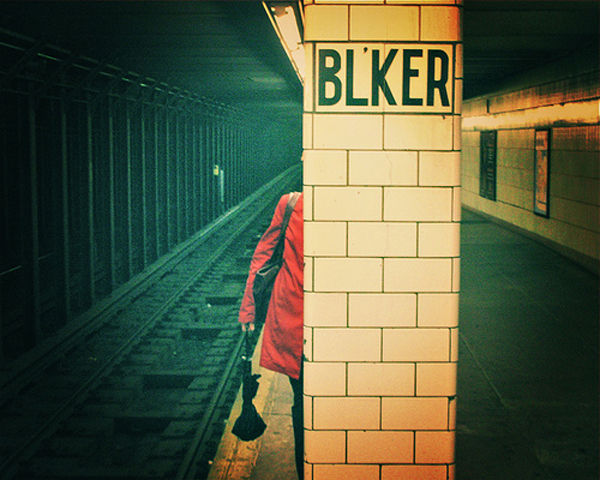 Don’t be afraid to ask someone for a picture. Just tell them you’re a photographer and that you would love to capture something really beautiful about them in this environment. If they say no, don’t be discouraged. You’re going to find people who are just camera shy.

You can also take along a friend as a subject. If you do this, make sure you’re still getting the candidness that’s is so incredible about shooting in the subway. However, I encourage you to go out there and find things you’ve never seen.

When in doubt, just have ‘tunnel vision." Focus on what it is you’re there to achieve and let others do the same. The trick is to blend in with the environment while respecting the crowd. 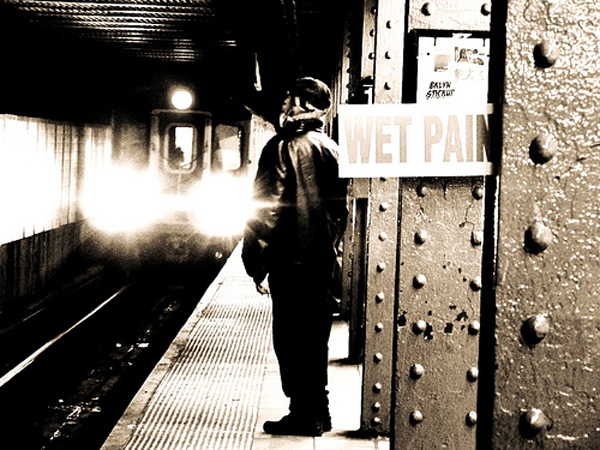 Subways are often grungy places, which is excellent for photography. Add grain to your images to emphasize the low-light or to increase the feeling of obscurity subways instill. Just enough to add a mood to the image without distracting from the rest. Another great technique to add drama and interest is to convert your photos to black and white.

Go for high contrast with deep blacks and bright whites to add richness to the image or choose grey tones to add a melancholy mood or industrial feel. Just pay attention to shadows, textures, and the initial mood of the image when experimenting with converting to black and white.

Not every image will look better converted. Especially because the color of light and objects can be very interesting in the subway (you may find yellows, oranges, reds, blues, browns, and greens). But black and white is excellent for creating mood and really enhancing a certain image. It could just be the missing element in some cases.

You could also use desaturation, but desaturate before the point where it becomes a black and white image. Leave enough color so that the color is obvious, but where the image just looks more subdued. Don’t think about vibrancy, but rather tone. This is a great way to take some of the realism away from the image.

Take a tripod for long exposure shots of the subway train zooming by. In these kinds of images, you definitely want to keep a subject (whether it’s a person, wall, etc.) in focus alongside the blur of the train, otherwise viewers will have no reference as to what the image is of.

You’ll also be able to get super sharp images in the low light. Certainly you can find subway stations that have an ample amount of light where you could shoot handheld and get great shots too. This will probably go for when you’re actually riding the train.

To do this, just keep a steady hand and don’t set the shutter too low. It’s surprising how well slower shutter speed images can come out if you shoot as still as possible (taking multiple photos in continuous mode also helps ensure that a few will be sharp). Just be prepared the first time you go to shoot by bringing a tripod and then see what you can do with the light that’s available.

What do you want to capture about these underground stations? Do you want to take documentary images or a more artistic approach? Think about your style, the location, and the people there, and go for an angle or story, that best combines these elements.

The kind of equipment you use is going to be different depending on the angle you choose. For example, if you want to best document the mood of the people who use the subway as their everyday routine, take a 50mm prime lens and use it to get stunning candid portraits.

Another great way to enhance the story of the images is to incorporate close ups. Bring out the artistic appeal of everyday objects, like the handles or poles people use to brace themselves on the moving subway train. Focus on the things others pass by without a second thought and see the potential for a greater message.

Even if you don’t live near a subway, just keep these tips in mind for when you travel! It’s an excellent place for capturing the real lifestyle of people in a different place.