How to Build a Film Style Look in Adobe Lightroom

But that doesn't mean that film doesn't still have advantages. The distinct look and character of film photography is still sought after. To get the best of both digital and film, many photographers capture photos digitally, and recreate the film look in post-production.

There are plenty of top notch preset packs for simulating film photography with your digital images. In this tutorial, we'll learn to build the look on our own, and consider a shortcut to getting the same result.

Before we start recreating the film style in Adobe Lightroom, let's think about what gives film such a distinct and desirable look. What are we trying to build when we pull the sliders and settings in Lightroom?

But before dissecting the look, I want to emphasize that "film look" can mean many different things based upon the type of film that's being used. Rich, colorful films like Fuji Velvia might be outside your expectations when thinking of film, for example.

The image below is a great example of landscape film photography. The image certainly doesn't look dated or aged, but the colors of the sky and foliage are rendered differently than they would be with a digital sensor.

In general, the film look can be broken down to three key aspects:

Here's another film image to illustrate the shift in black and white points. The shadows in the corner of the image aren't quite black; they're a very dark grey with, in this case, a green tint that is characteristic of the film used.

Although each type of film has its own characteristics, there are some common styles that define the film feel. Check out famous films like Fuji's Velvia and Provia, Kodak Gold, and Ilford Delta to sample the many styles of film that exist.

Now that we have a good feel for what makes film photography different than digital, let's learn to recreate the look in Lightroom.

A Shortcut to Film Adjustments in Lightroom

Building a film look from scratch isn't the only way to take your images back in time. If you want the quickest way to style for your images, but don't have time to build and master manual techniques in Lightroom, visit our sister-site: Envato Elements. Elements has a great collection of reliable Adobe Lightroom presets—letting you apply a film look to an image with a single click.

With more than 70 film styles for Adobe Lightroom, this Vintage Film pack is the perfect place to start when it comes to filmic styles for your images.

One of my favorite things about Analog is that it includes a fadeable approach to applying presets. Each preset can be toned up or down for more or less of the effect as needed.

Rounding out the film photography lineup, the Portochrome pack is a fictitious film-style with plenty of variants that you can apply to your images.

In the screencast below, I create a quick film look in Lightroom. We'll address each of the three keys to the film style in this video.

If you'd rather work with a step-by-step guide, the rest of the tutorial will be your resource.

To get started with the curves, go into Lightroom's Develop module and scroll down the panels on the right to find the Tone Curve panel.

To modify the curves, start by clicking the point curve icon in the lower right hand corner of the tone curves panel. This changes our view and places points on the curve, which we can select and drag to modify the curve. 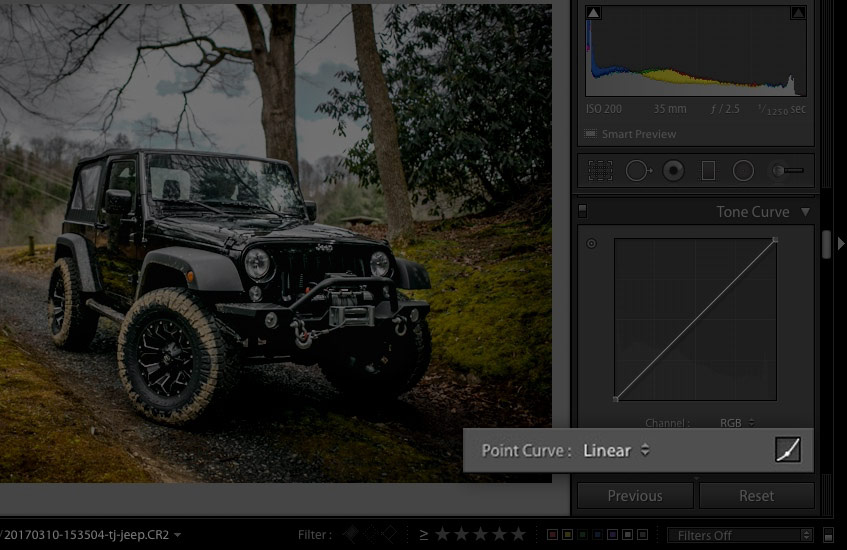 To modify the tone curve, we need to understand what the curve represents visually. The point on the left modifies the darkest black in the photo, and the point on the right controls the brightest white. Using these two points, we can adjust the blacks and whites that we studied in the film look.

To pull the darkest parts of an image from deep blacks into a grey range, select the point on the lower left end of the tone curve and pull it directly up along the left side of the graph.

In the screenshot below, you can see a simple tweak to the curve to pull the tone up and shift the black point in the image.

Before adjusting the white point of the image, add another point in the tone curve by clicking near the upper right corner of the curve. This will hold the curve in place at that point.

After adding the new point to the curve, select the point in the upper right corner of the curve and pull it down along the right side of the graph. This pulls the white point in the sky and the highlights into a more muted light grey range.

You can see the effects in the windshield of the car and in the sky in the example above.

It's impossible to generalize the color characteristics of film. This is because the characteristics differ from one type of film to the next, and can't be easily summarized. In fact, my favorite thing about film is that we have so many options and ways to capture the color spectrum by changing film.

Because each type of film renders color differently, there are no specific tweaks to make. I recommend experimenting with the H/S/L (hue, saturation, luminance) panel to create custom color combinations.

The HSL panel has three main controls to adjust color:

Remember that each type of film has its own way of rendering color. Combine color adjustments to create multiple film styles.

For our last tweak, we can add grain to give the image a more organic look. Still in the Develop module, scrolling down the panels on the right until you find the Effects panel, complete with sliders for adding grain.

To properly add grain, zoom in to view your photo at 100 percent. Only by zooming in will you have an accurate perception of how much grain is being added to the image.

After zooming in, drag the Amount slider to a midpoint. The Size and Roughness sliders are ideal for adjusting the look of grain in your images. Larger, rougher grain is going to feel like high ISO film, while smaller grain mimics standard, medium ISO films. Adjusting the size and roughness is an easy tweak to further enhance the film look and recreate the grain detail that characterizes film.

After you invest the time to create filmic looks in Lightroom, you can save your adjustments as a Lightroom Preset so that you can apply the same look to other images with one click.

To create a preset, find the Presets panel on the left side of the Develop module and click the + button.

When the next box pops up, you'll want to uncheck all boxes except those that represent the settings you've applied.

If you followed this tutorial, I recommend leaving only the Tone Curve, Treatment (Color), Grain, and Process Version boxes checked. Being selective with the boxes you check will allow you to apply the film style without affecting other settings such as exposure.

In the future, to apply the preset to an image, simply look for the preset that you saved in the Presets panel and apply it to your images with just one click. Also consider building multiple presets with varying color, grain, and curve adjustments, saving each as your own custom preset style.

Create multiple presets for each of the film styles you're creating. Pretty soon, you'll have a variety of homemade film types to apply to your images.

The steps in this tutorial can help you build a film style that takes your images back in time. The combination of color, grain, and tone curve adjustments in the digital darkroom can simulate traditional film processed with chemicals. Run with the skills you learned to bring the film look to your digital images and create multiple presets to make your own custom types of film.

If creating, tweaking, and applying presets appeals to you, have a look at a few other tutorials on Tuts+ to guide you through making other adjustments to your images in Lightroom.