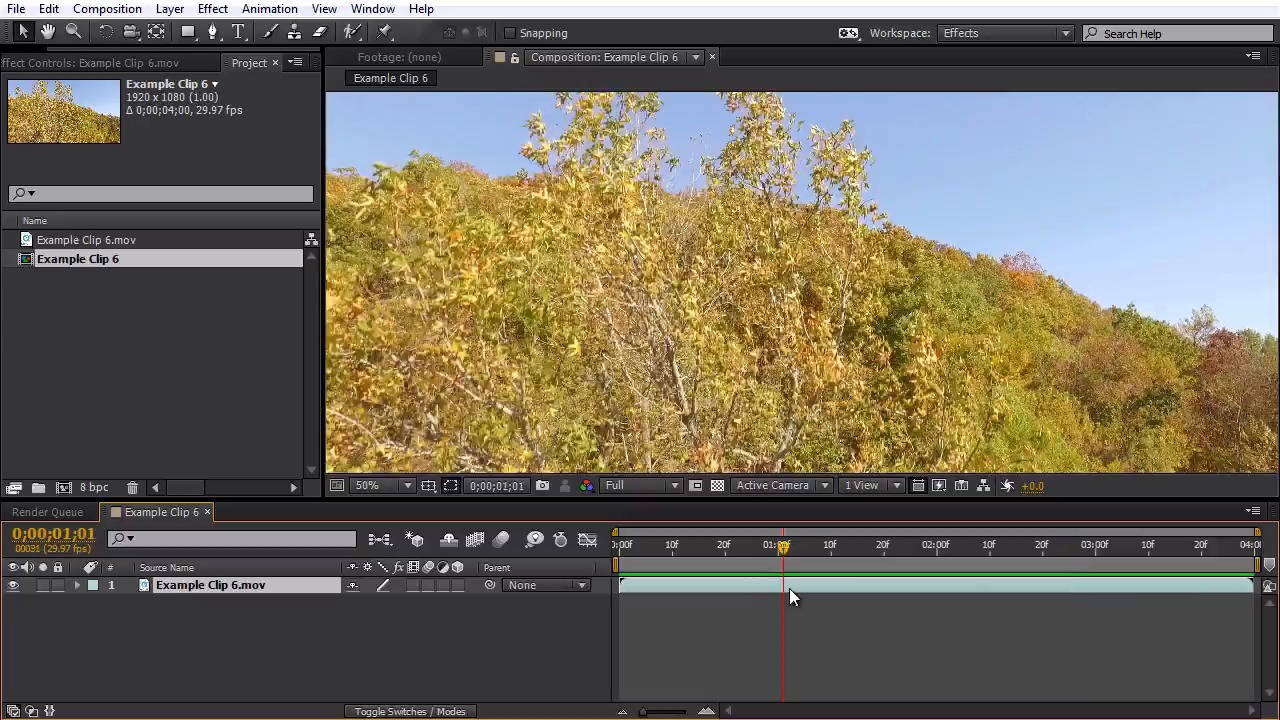 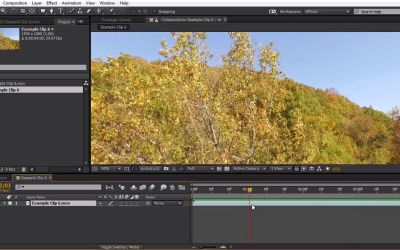 You will learn some tricks to achieve a slow motion effect on footage not shot at a higher frame rate.

In this lesson, we're gonna learn how to do a faux slow motion effect on our footage. Basically a fake slow motion effect where we're taking footage that has been shot at 30 frames per second, we're gonna slow it down so it looks like it was shot at 60 frames per second. So the first thing we wanna do is create a new composition, so I'm gonna grab my example clip and drag that down to the create a new composition window. Now we can see what we've got here, we've got this shot basically revealing the treeline here. Flying really close in front of a tree, flies up and then we see the treeline and this shots about two seconds long. Let's say I had a project and I need this shot to actually fill in about four seconds. What we can do is a fake slow motion effect. It's going to look pretty good for the shot. So first thing I"m going to need to do is extend my composition. Right now it's currently only two seconds long. So, I"m going to go right here, my composition settings. For duration I wan to set this at four seconds. Click okay. Pull this back here so we can see. Now we see our shot only fills up half of our composition timeline and that's exactly what we want. So what we do now is we're gonna click on our example click. I'm gonna right-click on it. Under time I'm gonna go to time stretch. This is gonna open up our time stretch options. And right now we can see the stretch factor is at 100%. So right now our duration is two seconds. And that's what our clip originally was. So I want this to be double. And I want the stretch factor to be 200%. So I'm gonna type in 200. Now we can see our new duration is four seconds long which is gonna fill up our composition perfectly. And it's gonna work for our shot that we need. So I'm gonna click okay. And now we can see our shot's been stretched to four seconds. Which that looks pretty good, but let's go ahead and ran preview this, and we can see what's happening here. So now we see what's going on here, basically every frame has been duplicated from our two second shot, which is what enables it to become a four second clip. Which that can work pretty good, and it's a very quick effect. It'll work good in a pinch. However we're getting kind of a strobing effect, because each frame is just being duplicated so it's kind of jumping a little bit. That isn't very cinematic, and we want this to look really good. So what we can do is go over to frame blending. We can click it once and that's going to enable frame blending for these clips. We can go ahead and turn it on for composition here. We're going to do something very strange, because what frame blending is doing is taking each frame and kind of overlaying the one before and after over each other. So when I do a ramp preview of this, its going to look very trippy, almost like a dreamlike sequence. Now we can see what this is doing. It does slow it down but it just doesn't look quite right to the eye. Again, it looks kinda like a dream sequence. So we need to take this a step further. So if we go over to our frame blending here, we can click that one more time and that's gonna enable what's called pixel motion. This is an awesome effect when you wanna create a faux slow motion effect. So what it's doing is taking one frame and the very next frame, and it's creating a new frame in between them from the data from each of those outside line frames. So we can go ahead and ramp preview this so you can see what's happening. Now one thing to note when you're doing the pixel motion, it's gonna take a little bit longer to render because it's creating all those new frames in between But it's gonna make the shot look a lot smoother and look a lot more like a real natural slow motion shot. And there we go. Now we can see that this is not stuttering at all, it looks much more like a regular slow motion shot, and this has all been created from a 30 second shot that's now being interpreted like it was almost shot at 60 frames per second. So it's a really cool quick and easy way to get slow motion effects added to shots that weren't shot at a higher frame rate. Now one thing to notice is it is creating these new frames and you have shots like this that have just a lot of stuff going on. You may notice a little artifacting that can occur like between the branches here. It may get a little fuzzy. In our case I don't think anyone's gonna notice just because when this is viewed at 100% no one's going to be able to see that going on. But it's just one thing to keep note of. And you may see some artifacting going on around the edges, so just keep that in mind and keep an eye out for that when you do this effect. But it's a really cool and convincing way to make a shot look like it was shot at a higher frame when it wasn't. In the next lesson we're gonna learn how to add motion blur to our shots in post, in order to prevent strobing.